The species is named in honour of Charles M. Francis, who, for many years, has contributed greatly to the taxonomic study of Southeast Asian bats. He also collected the holotype of this species from Sabah, Malaysian Borneo in 1983. The proposed English name is ‘Francis’s Woolly Horseshoe Bat’.

This is a medium-large Rhinolophus   with a FA of 52.90–54.70 mm ( Table 1 View TABLE ) and SL of 24.27–26.57 mm ( Table 2 View TABLE ). The noseleaf is dark brown with welldeveloped lateral lappets ( Fig. 1 View FIG ). The dorsal and ventral pelage is uniformly whitish-brown basally and greyish-brown at the tips. In the skull, the anterior median swelling is well inflated and relatively large, with an AMSW of 4.76–5.18 mm. The supraorbital depression is deep and each supraorbital ridge is very well defined ( Figs. 2a, 2c View FIG and 3a View FIG ). The sagittal crest is well developed. The upper canine (C 1) exceeds the second upper premolar (P 4) in height ( Figs. 2b View FIG and 3a View FIG ) but is about equal to it in crown area ( Figs. 2d View FIG and 4a View FIG ). The first upper premolar (P 2) is very small and with a distinct cusp ( Figs. 2b, 2d View FIG and 4a View FIG ). It is situated within the toothrow and in contact with the C 1 and P 4. The palatal length ( PL) is about one-third (34.5–35.4%) of the maxillary toothrow length (C–M 3). The lower incisors (I 1 –I 3) are tricuspidate. The lower canine (C 1) exceeds the height of the third lower premolar (P 4), which is about equal in height to the first lower molar (M 1). The second or middle lower premolar (P 3) is very small and extruded from the toothrow, so that the first and the third lower premolars (P 2 and P 4) are in contact or nearly so ( Figs. 2d View FIG and 4a View FIG ).

This is a medium-large Rhinolophus   with a FA of 52.90–54.70 mm and a MASS of 16.0– 18.0 g ( Table 1 View TABLE ). The ear is relatively large with a pointed tip ( Fig. 1 View FIG ); the height of the ear (E) is 23.81–27.00 mm. The noseleaf is dark brown. The anterior noseleaf is rounded and relatively large, with a greatest width ( NL) of 12.21–12.36 mm; it does not cover the lower lip. The connecting process is long and projects anteriorly. There are well-developed lateral lappets. The sella is broader at the base and connects to the lateral lappets on both sides; it is abruptly concave in the middle; the upper part is parallel sided and continues to the tip, which is rounded off. The lancet is high; slightly concave in the middle and with a pointed tip. The lower lip has one mental groove. The dorsal and ventral pelage is uniformly whitish-brown basally and greyish-brown at the tips. In the wing, the third metacarpal (3 MET) is the shortest, 35.94–37.47 mm; the fourth (4 MET) is subequal to the fifth metacarpal (5 MET), 41.22– 42.47 mm and 42.85–43.99 mm, respectively. The plagiopatagium and uropatagium are dark brown and without hairs.

In the mandible, the lower incisors (I 1 –I 3) are tricuspidate ( Figs. 2d View FIG and 4a View FIG ). The lower canine (C 1) exceeds the height of the third lower premolar (P 4); P 4 is about equal in height to the first lower molar (M 1); P 2 is about half the height of P 4. The second or middle lower premolar (P 3) is very small and almost fully extruded from the toothrow ( Figs. 2d View FIG and 4a View FIG ), so that the first and the third lower premolars (P 2 and P 4) are in contact or nearly so.

Rhinolophus francisi   emits a typical long narrow band FM /CF/ FM signal. Based on hand-held specimens from Kalimantan and Thailand (n = 2), the most energy is in the second harmonic with an

Comparison with other species

Rhinolophus francisi   differs significantly in size from the larger R. luctus   and smaller R. sedulus   ( Table 1 View TABLE ). It is closely similar to other medium-sized woolly horseshoe bat species, namely R. trifoliatus   , R. beddomei   and R. formosae   , the latter two of which have a slightly longer FA ( Table 1 View TABLE ) and are known to be restricted to the Indian Subcontinent and Taiwan, respectively. Although similar in size, it differs from R. trifoliatus   in having brown hairs and a dark brown noseleaf and ear membranes, whereas the hairs are yellowish brown and noseleaf and the ears are yellow in R. trifoliatus   .

In the acoustic characters, the call frequency of R. francisi   , which has an fmaxe of 49.2–50.0 kHz, is closely similar but slightly lower than that of the sympatric and similar sized species R. trifoliatus   , which has an fmaxe of 50.0–53.5 kHz in Thailand ( Soisook et al., 2010) and 50–54 kHz in peninsular Malaysia and Sabah ( Francis, 2008). Two individuals of R. beddomei   recorded from Shenduruney,

A maximum-likelihood phylogenetic reconstruction based on these sequence data showed only moderate bootstrap support (62%) for a monophyletic grouping of R. francisi   with R. beddomei   , R. formosae   , R. luctus   , R. sedulus   and R. trifoliatus   , but is in line with our morphology-based designation of this taxon to the trifoliatus   -group ( Fig. 6 View FIG ). Nonetheless, specimens of R. francisi   from Kalimantan and Thailand showed sequence divergence of 10.03% from each other (Table 4), a relatively large difference when it is considered that some species within the trifoliatus   -group (e.g., R. luctus   versus

R. beddomei   ) can show as little as 2.84% sequence divergence at the same marker. On the other hand, we note that the sequence divergence between R. trifoliatus   and R. formosae   was as large as 16.19% (Table 4). Currently, because the single specimen of R. francisi   known from Thailand shows no discrete morphological or echolocation differences from the Kalimantan specimen, we consider that the Thai bat is likely to represent a different subspecies of R. francisi   , as described below. Nevertheless, more specimens from future surveys using harp traps in evergreen forest in Thailand may reveal that the two disjunct populations are actually distinct at species level.

The three specimens, ROM MAM 111303, 111309 and 111321, from south-central Vietnam reported as ‘ Rhinolophus   JLE sp. B’ in Francis et al. (2010) were all genetically very similar to each other (bootstrap support = 98%). These bats formed a well-supported monophyletic clade (bootstrap support = 85%) with R. francisi   ( Fig. 6 View FIG ), interestingly showing a well-supported sister relationship (bootstrap support = 81%) with the specimen from Borneo (average sequence divergence 6.62%) to the exclusion of the geographically closer bat from Thailand (average sequence divergence 7.98%) (Table 4). Although none of the three specimens from Vietnam was examined, the picture of the skull of ROM MAM 111303 on BOLD website (www. boldsystem.org) looks very similar to R. francisi   . In summary, these phylogenetic analyses, while preliminary, suggest that Rhinolophus   JLE sp. B also belongs to R. francisi   , probably as a separate subspecies, however, we cannot rule out the possibility that multiple species are present. Further detailed examination of the morphology, measurements, and echolocation data, if available, is recommended to confirm the taxonomic status of these specimens.

In Borneo, the type specimen from Gunung Trus Madi in Sabah was caught in a mist net set in forest on a mountain ridge (C. M. Francis, personal communication). It was found along with seven other bat species during the expedition in 1983 ( Sheldon and Francis, 1985). A second individual was captured in undisturbed evergreen forest of Maliau Basin and subsequently released. The specimens from Kalimantan were collected in undisturbed (Tanjung Puting National Park; Gunung Palung National Park), and logged evergreen forest (Nanga Tayap — specimens subsequently released), at sites where both R. sedulus   and R. trifoliatus   were also present

( Struebig et al., 2006). In Thailand, a single specimen from Mae Nam Pha Chi was captured in a harp trap set over a seasonal streamlet surrounded by dense primary evergreen forest at an elevation of 431 m a.s.l. It was found at dawn in the same trap as Nycteris tragata   , R. microglobosus   , Myotis muricola   , Kerivoula papillosa   and Phoniscus jagorii ( Soisook et al., 2010)   . The collection sites of Trus Madi, Tanjung Puting and, Mae Nam Pha Chi are legally protected forests, as are survey sites Maliau Basin and Gunung Palung. However, the hunting of mammals may still be a problem across this region, and is considered as major threat to wildlife.

Rhinolophus francisi   is currently known from only six records; with two records in Sabah, Malaysian Borneo; three in Indonesian Borneo (Kalimantan) and a single record in Thailand (see below). The species may be distributed more widely in these regions, but has been rarely captured despite extensive surveys. Genetic data also suggest that this species is likely to occur in Vietnam, although this needs to be confirmed. 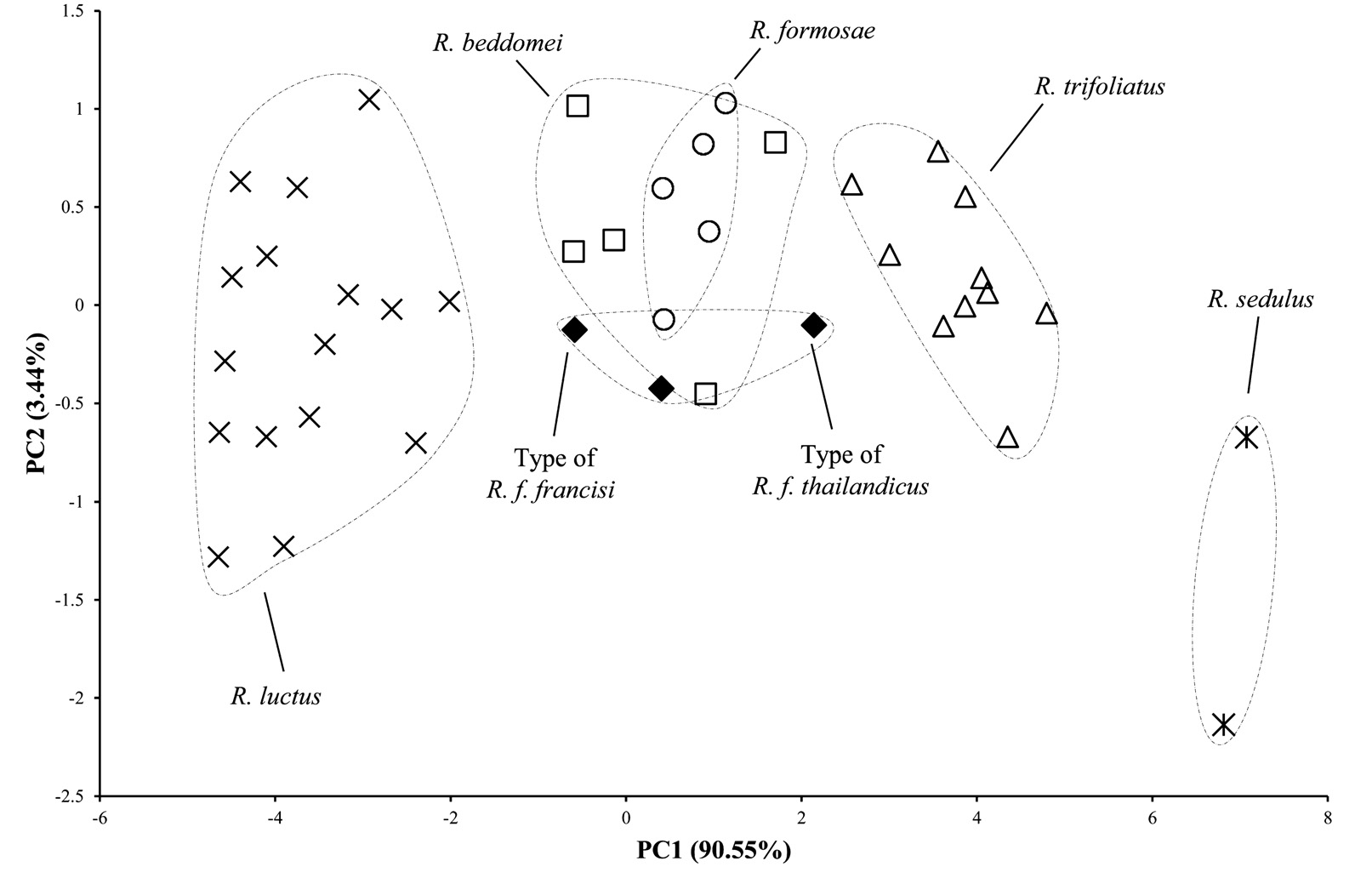 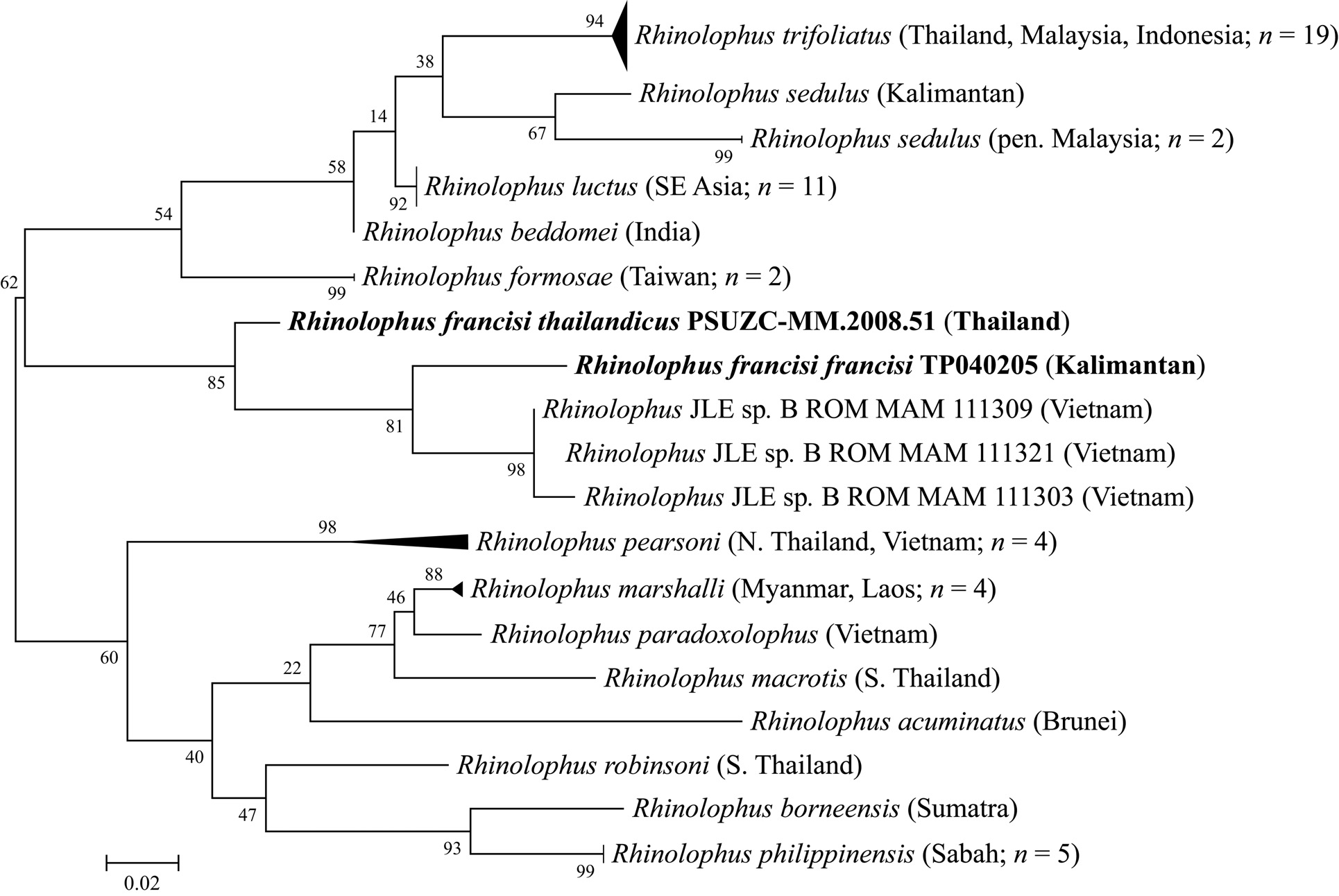 FIG. 6. Maximum likelihood tree based on DNA barcodes of the six currently known species in the trifoliatus-group and other species of Southeast Asian Rhinolophus. The genetic distance within and between species are in Table 3. Specimens included in this analysis are listed in the Appendix

FIG. 6. Maximum likelihood tree based on DNA barcodes of the six currently known species in the trifoliatus-group and other species of Southeast Asian Rhinolophus. The genetic distance within and between species are in Table 3. Specimens included in this analysis are listed in the Appendix

TABLE 1. Body mass (in grams) and external measurements (mm) of R. francisi sp. nov., R. beddomei, R. formosae, R. trifoliatus, and R. luctus. Mean ± SD, minimum and maximum values are given. Sample sizes where differing from those given under n are included in brackets. Definitions of measurements are included in the Materials and Methods section