Variation. Three of the seven females from Serra do Cipó have an entire epigynum with a rounded hood, which hides the atrium with the copulatory openings. The remaining females, from Brasilândia de Minas, Serra da Moeda and four specimens from Serra do Cipó lack the apex of the epigynum. The total length of females varies from 7.20 to 10.13 (n, 4).

Remarks. M. infelix was described based on a single female from Mato Grosso, central-western Brazil ( Soares & Camargo 1948), and was considered by Levi (1997) as a junior synonym of M. bigibba based on the examination of the both species’ type material. In this same study, he described M. chavona based on a single male from Meta, Colombia.

We have found on the UFMG collection a sample of seven males and seven females collected together ( UFMG 1739). The males match perfectly the diagnosis of M. chavona . However, the females show a very weird genital pattern. Three of them have an epigynum similar to those of M. lemniscata ( Levi, 1997: figs 46–48) and of the holotype of M. infelix ( Levi, 1997: figs 13–14), which have a deep cavity created by the epigynum hood. However, they differ from M. lemniscata by having a sclerotized medium septum on the epigynum, and by lacking the median black line and the black bands on the carapace edges. The holotype of M. infelix shares the same features with those three specimens. The remaining four females apparently have their epigynum damaged, missing the apex, making them very similar to some females illustrated by Levi (1997: figs 10–12) as M. bigibba . Those specimens considered by Levi as a variation of M. bigibba matched better the holotype of M. infelix than the holotype of M. bigibba by having a posterior atrium in the epigynum rather than the small posterior bulge seen in M. bigibba , leading us to reconsider the synonymy between M. bigibba and M. infelix .

Natural History. Several female specimens examined for this study have mutilated epigyna, in which the apex has apparently been removed ( Figs 5A–C View FIGURE 5 , 7A–D View FIGURE 7 ). The break in the epigynum coincides with an apparent fracture line ( Fig. 4A–C View FIGURE 4 ). The mutilation of female epigynum during or after copulation has been reported for other araneid genera, and has been seen as a male strategy to prevent subsequent female mating events with other males ( Mouginot et al. 2015, Nakata 2016). We think this explanation could possibly apply to M. infelix . We also noted cell clumps in the epigynum surface of different specimens, particularly on the fracture line ( Figs 6C, F–H View FIGURE 6 , 7E–F View FIGURE 7 ). These cells resisted the enzymatic cleaning treatment, indicating a chitin cell wall. The cells in our images are similar to the conidia of Beauveria bassiana , an entomopathogenic fungus ( Wakefield 2006: fig 3a–d). It is unclear at this point whether these apparent fungal cells have any importance for the female epigynum mutilation, or if they simply spread on the fracture line.

Regarding the male copulatory apparatus, the shape and position of the proximal branch of the terminal apophysis suggest it could act as a functional conductor during copulation. Additionally, the remarkable size and sclerotization, as well as the folded shape of this sclerite ( Fig. 2C View FIGURE 2 ) could indicate it is somehow related to female epigynum mutilation.

Distribution. This species is distributed mostly in the Neotropical savannas, including the Colombian llanos, which represent the northernmost record of the species. In Brazil, it can be found in the Distrito Federal, Minas Gerais, and Mato Grosso ( Fig. 16 View FIGURE 16 ). 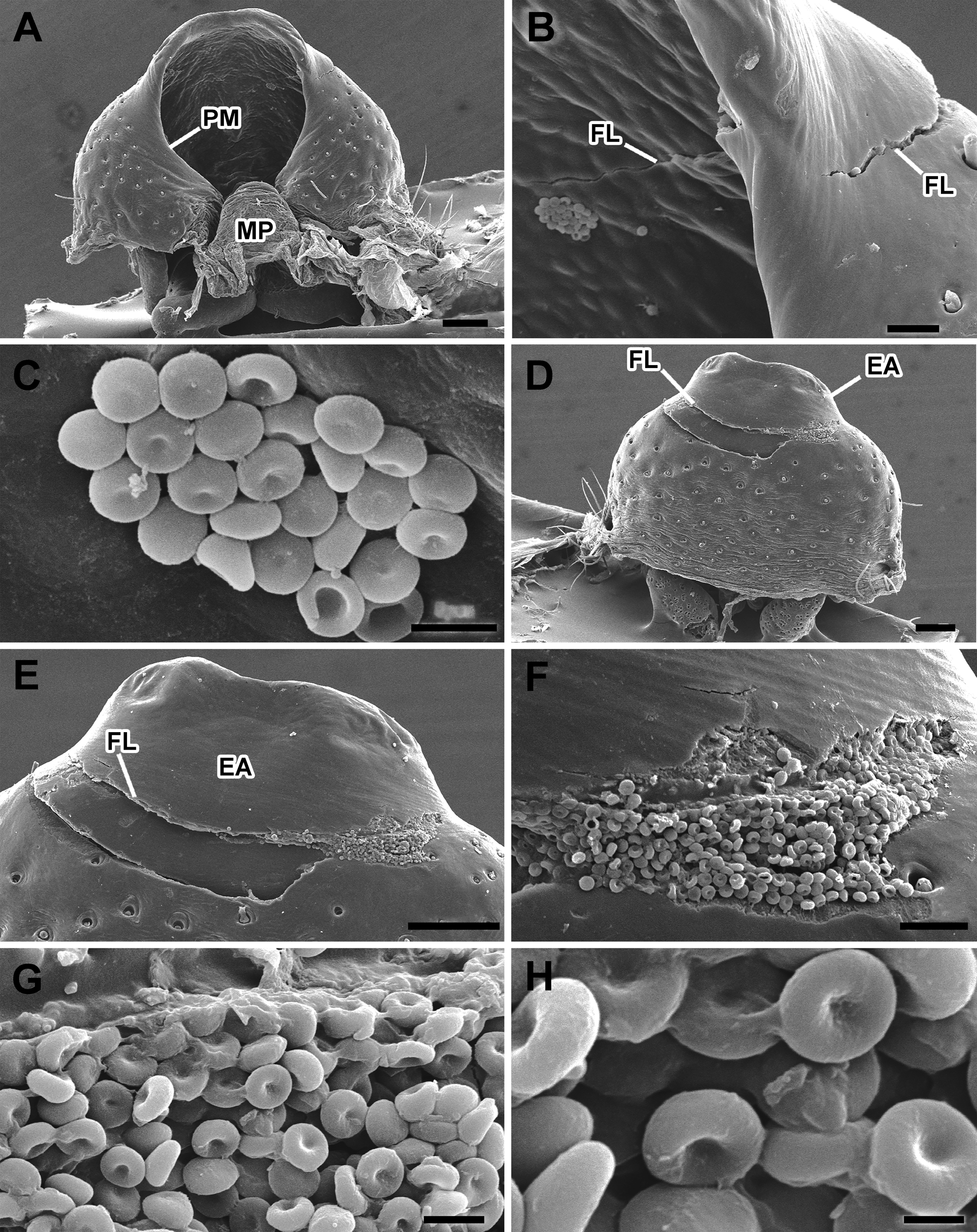