Variation. The embolus of the right palp of a male from Serra Talhada, Pernambuco, Brazil ( UFMG 15787) is visible, appearing at the tip of the distal projection of the terminal apophysis. A male from the same locality ( UFMG 15790) has four pairs of dark marks on the sternum, and another male from the same sample has only one pair of these marks on the anterior edge of the sternum. The total length of males varies from 3.75 to 4.92 (n,4).

Distribution. This species is known mostly from Brazilian dry physiognomies and savannas in the states of Minas Gerais, Paraíba, Pernambuco and Bahia ( Fig. 17 View FIGURE 17 ). The only habitat exception is from a southernmost record in the central-southeastern state of Minas Gerais, which is a semideciduous humid forest ( UFMG 5449). The northernmost record is located in the south of the state of Paraiba.

The first attempt to propose palp sclerite homology in Cyrtophorinae was made by Exline (1949), who described a highly sclerotized process fused to the tegulum of M. lemniscata as homologous to the araneid median apophysis. She also identified a finger-shaped, poorly sclerotized conductor in the same species. The latter sclerite is particularly difficult to see in the unexpanded palp, because it is covered by the terminal portion of the bulb above and by the tegulum below ( Exline 1949: fig. 10).

Levi (1980) disagreed with Exline’s (1949) homology hypothesis, though acknowledging how challenging could it be to homologize Mecynogea palp sclerites with those of other araneids. He proposed that the structure referred by Exline as a homolog of the median apophysis should be considered as a conductor. Additionally, he stated that M. lemniscata lacks a median apophysis, a feature shared with species of Cyrtophora Simon, 1864 . However, although he illustrated an expanded male palp, he did not present an alternative homology proposition for the sclerite considered as a conductor by Exline (1949).

The interpretation of the male palp sclerites in the subfamily became a bit more complicated after Levi’s (1997) revision of the Neotropical Cyrtophorinae genera. In that study, Levi stated that the median apophysis was lost in the species of Mecynogea whose females have a hood-like epigynum, implicitly assuming that it should be present in other species of the genus. The presence of a sclerite homologous to the araneid median apophysis in Cyrtophorinae seemed to be debatable for him since, although he repeatedly refers to a median apophysis along the text, he indicated the structure with a question mark (“M?”) in the homology scheme of an expanded male palp of Mecynogea bigibba ( Levi 1997: figs 23–25).

To verify the taxonomic distribution of this feature, we analysed exemplars of all the Neotropical genera of Cyrtophorinae: Cyrtophora , Manogea Levi, 1997 and Kapogea Levi, 1997 ( Fig. 15A–F View FIGURE 15 ). We discovered that the structure named by Levi (1997) as a “median apophysis” in those genera is in fact homologous to the internal branch of the terminal apophysis we have found in Mecynogea . Additionally, we have found that the other two terminal apophysis branches are also present in those genera ( Fig. 15A–F View FIGURE 15 ). It thus seems clear to us that Cyrtophorinae genera lack the median apophysis, which is a potential synapomorphy of the subfamily. Additionally, we noted that the conductor is highly sclerotized and fused to the tegulum in all genera of the subfamily ( Figs 14A–D View FIGURE 14 , 15A–F View FIGURE 15 ), another putative synapomorphy of the Cyrtophorinae. 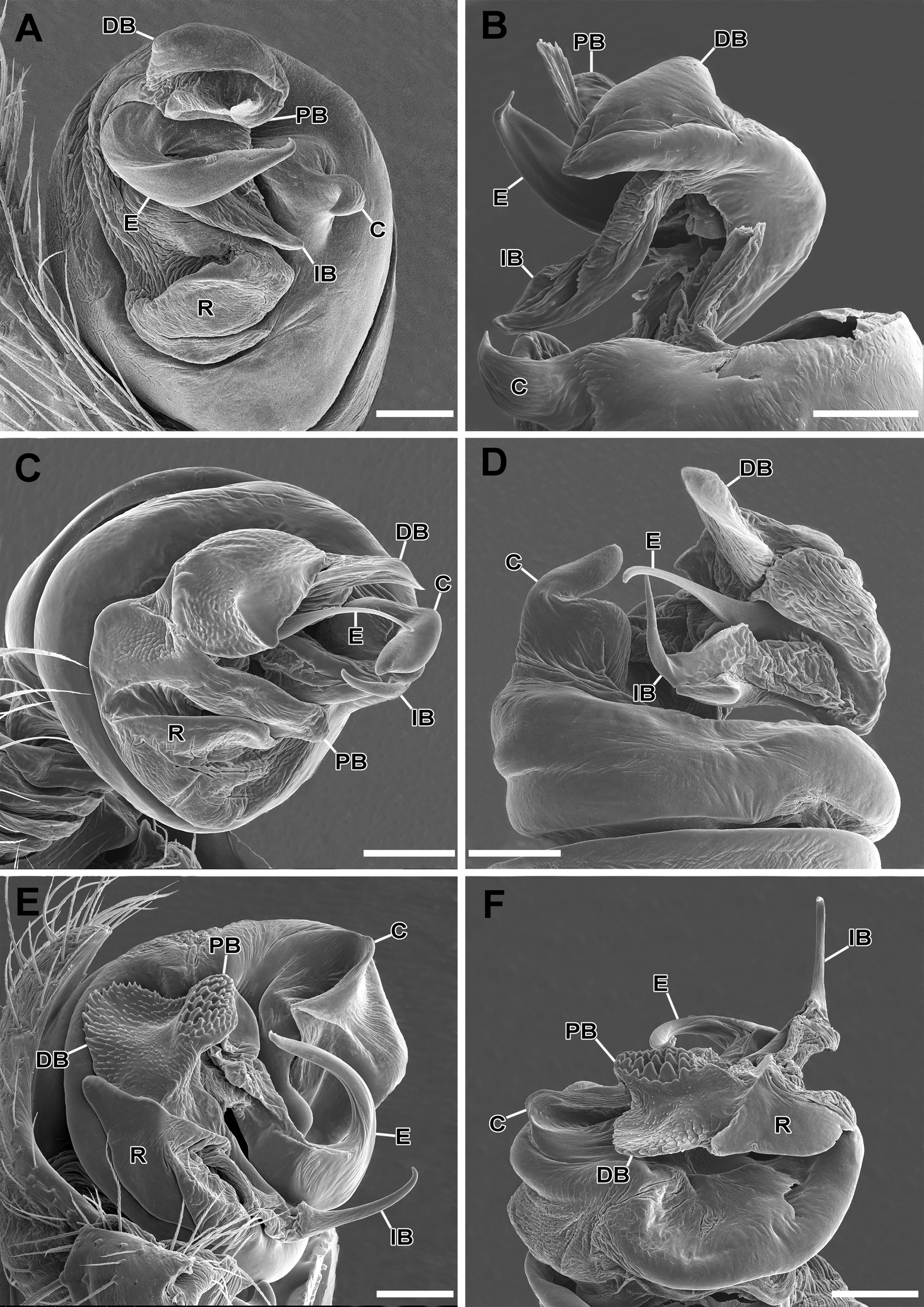