Etymology. The generic name is a Spanish noun meaning “sickle” and denoting the shape of the tegular apophysis of the male palps. The gender is feminine.

Remarks. No cladistic study has ever tackled the family Sparassidae as a whole and thus, the subfamily classification still follows that proposed by Simon (1897) with very little change. Nevertheless, the subfamily Heteropodinae Thorell has been intensely studied by Jäger (e.g. 1998; 1999; 2000; 2002) and several characters have been proposed to define the subfamily and its species. These include the presence of intermarginal denticles in the chelicerae, the long toothed female palpal claw and the two recurved eye rows ( Jäger 1998). In addition, I consider characteristic for all Heteropodinae the presence of a VTA, that can be median (e.g. Pseudopoda Jäger and Bhutaniella Jäger ) or slightly retrolateral (e.g. Heteropoda Latreille and Barylestis Simon ), a simple ventral branch on the RTA and only one lateral spine on each side of metatarsi I– II. Species of Guadana gen. nov. exhibit all of these diagnostic characters and thus the genus is placed in this subfamily.

Despite being previously left out of Heteropodinae ( Jäger et al. 2009) , the description of Guadana gen. nov. strongly suggests that the Neotropical genus Sparianthina Banks should also be placed in the subfamily for it exhibits all diagnostic characters currently ascribed to Heteropodinae . Additionally, both genera seem to be more closely related to each other than to the remaining Asian Heteropodinae . The intermarginal denticles are arranged in a single row ( Fig. 7 View FIGURES 7–12 ; Jäger et al. 2009, figs 10, 26) and the trilobate membrane shows a median tooth clearly smaller than the lateral projections ( Fig. 10 View FIGURES 7–12 ; Jäger et al. 2009, fig. 11) as opposed to the clustered arrangement of denticles (e.g., Jäger 2006, figs 19, 21) and similar sized lobes of the trilobate membrane (e.g., Jäger 2006, fig. 7) seen in the Asian genera. Also, the roughly pentagonal shape of the opisthosoma as well as the similarity of the male palps point towards this close relationship. FIGURE 39. Distribution records for the species of Guadana gen. nov. 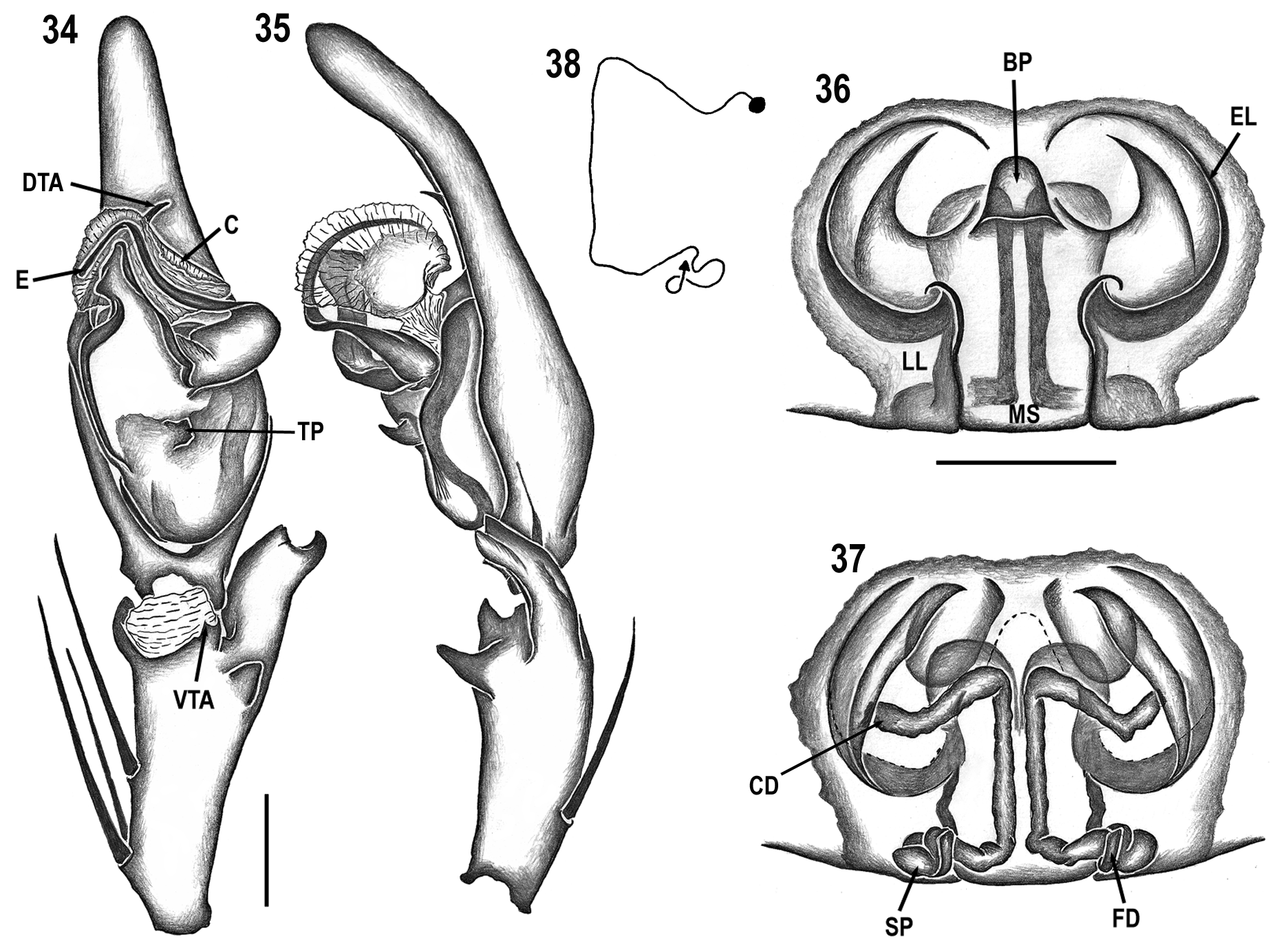