Diagnosis. Within Deltochilini (sensu Tarasov & Dimitrov 2016)   , Scybalocanthon   can be distinguished by several characters. Mesotarsomeres and metatarsomeres short, external margin approximately half the length of the second tarsomere, and obliquely truncate apically ( Figs. 3 View FIGURE 3 G–H). Lateral margins of tarsomeres parallel, forming an even margin along the length of the tarsus. Overall shape of mesotarsomeres and metatarsomeres 2–4 varies from quadrate to rectangular. Dorsal surface of mesotibiae with dense setae, randomly distributed ( Fig. 3I View FIGURE 3 ); setae not aligned as in some Canthon   species ( Fig. 3J View FIGURE 3 ). Pygidium and propygidium not separated by carina, or carina inconspicuous.

Description. Body. Coloration variable according to species. Oval shape, lateral edges rounded. Length. 5.8– 10.3 mm. Head. Dorsal surface with fine microgranulation. Clypeal margin with two small, triangular central teeth. Lateral margin regularly curved outward. Eye comma shaped in dorsal view. Dorsal interocular space at least 12 times as wide as eyes. Thorax. Pronotum twice as wide as long, anterior angles acute, directed forward. Margin between anterior and posterior angles slightly or strongly curved outward, with or without angulation at the middle portion. Surface of pronotum with color pattern variable according to species. Hypomera not excavated, lacking carina separating the anterior and posterior portions, or with short and inconspicuous carina. Mesometaventral suture straight or slightly arched. Metaventrite moderately convex. Elytra. Lateral margin slightly curved outward or approximately straight. Elytral striae weakly ( Fig. 3B View FIGURE 3 ) or strongly ( Fig. 3A View FIGURE 3 ) impressed, with punctures conspicuous or not. Surface of elytra with color pattern variable according to species. Eighth stria carinate ( Fig. 3D View FIGURE 3 ) or not at the anterior portion. Abdomen. Pygidium rounded apically, not separated from propygidium by carina, or carina inconspicuous. Surface of pygidium with color pattern variable according to species. Legs. Surface with uniform coloration or with yellow and black spots along its length ( Figs. 3 View FIGURE 3 E–F). Protibiae with three lateral teeth. Anterior and posterior edge of mesofemora and metafemora not margined. Mesotibiae smoothly arched toward body. Metatibiae almost straight. First mesotarsomeres and metatarsomeres short, external margin approximately half the length of the second tarsomere, obliquely truncate at the apex ( Figs. 3 View FIGURE 3 G–H). Tarsal claws without basal teeth. Secondary sexual characters. Females can be distinguished from males, in general, by the middle protibial tooth equidistant from the other teeth; in males, the middle protibial tooth is closer to apical tooth. Apex of protibial teeth and tibial spur more pointed than that of males. Sixth abdominal ventrite longer than in males. The anterocentral portion of sixth abdominal ventrite, in the lateral view, more swollen than the posterocentral portion (males have, in general, the posterocentral portion more swollen). S. cyanocephalus   and S. arnaudi   new species do not show the sexual dimorphism discussed above (i.e., the differences concerning the protibial teeth, the protibial spur and the sixth ventrite). Genital capsule. Parameres slightly to strongly asymmetrical; dorsal margin with or without projection; ventral margin can have an excavation at the basal portion (as Fig. 4S View FIGURE 4 ). Endophallus. Lamella copulatrix absent. Superior right peripheral (SRP) sclerite circular, with handle-shaped extension and ring with thin border ( Figs. 5 View FIGURE 5 A–W). Frontolateral peripheral (FLP) sclerite with variable shape according to species ( Figs. 5 View FIGURE 5 A–W). Complex of axial and subaxial (A+SA) sclerites elongate, with irregular shape; in some species there can be one short additional sclerite ( AS) attached to the larger sclerite ( Figs. 5 View FIGURE 5 A–W).

Scybalocanthon   , as defined here, comprises only species with the following combination of characters: second mesotarsomeres and metatarsomeres with external margin with twice the length of the first tarsomeres, the latter with apex obliquely truncate ( Figs. 3 View FIGURE 3 G–H); lateral borders of tarsomeres parallel, forming a continuous border for all tarsi, overall shape of tarsomeres 2‒4 quadrate to rectangular; and dorsal/internal surface of mesotibiae with dense, randomly distributed setae ( Fig. 3I View FIGURE 3 ). The latter character is proposed herein to establish a more precise genus limit in combination with the other characters mentioned above. Some species currently included in Scybalocanthon   , however, have the second mesotarsomeres and metatarsomeres with external margin approximately 1.5 times the length of the first tarsomere, or shorter; lateral margins of mesotarsomeres and metatarsomeres 2-4 divergent apically, not forming a continuous border for all tarsi; and/or dorsal/internal surface of mesotibiae with setae arranged in rows. Therefore, these species were removed from Scybalocanthon   and considered as incertae sedis within the genus Canthon   : Canthon arcabuquensis ( Molano & Medina, 2010)   new combination, Canthon balachowskyi ( Martínez & Halffter, 1972)   new combination, Canthon nigellus Schmidt, 1922   , Canthon luctuosus Harold, 1868   , and Canthon magnus ( Molano & Parrales, 2015)   new combination.

The taxonomy of the genus Canthon   is still problematic. Throughout its taxonomic history, more than 250 species have been described in this genus ( Krajcik 2012), but its precise limits have not been established. Over the last decades, attempts tried to reduce the great heterogeneity and artificiality of Canthon   . Several new species were described and the genus was divided into a large number of taxa (nine subgenera and 28 full genera) ( Halffter & Martínez 1977; see also Cupello & Vaz-de-Mello 2018). Cupello & Vaz-de-Mello (2018) suppose that the taxa considered by Halffter & Martínez (1977) as subgenera of Canthon   will eventually turn out as independent genera, since there is no known synapomorphy. Currently, most Canthon   species are assigned to one of the nine subgenera, but 29 species and subspecies have not been hitherto classified in the last taxonomic revision of the genus ( Halffter & Martínez 1977; Schoolmeesters 2017). For those species, Halffter & Martínez (1977) formed groupings called “species lines”, some of which with subgroups. Since then, these species have been regarded as incertae sedis.

In this work, the four species removed from Scybalocanthon   are considered as incertae sedis within Canthon   . They do not present diagnostic characteristics that allow us to classify them into other genera closely related to Canthon   ( Halffter & Martínez 1977; Vaz-de-Mello et al. 2011). At the same time, these species match the definition of Canthon   given by Halffter & Martínez (1977). According to the identification key to genera and subgenera of Scarabaeinae   from the New World ( Vaz-de-Mello et al. 2011), these species are also identified as Canthon   . In addition, Canthon   was the genus in which two of those species were previously placed ( C. nigellus   and C. luctuosus   ). Future cladistic studies may unravel the deeper relationships between those and other species of Canthon   sensu lato, but we prefer to transfer temporarily those four species to this genus.

The male genitalia present important characters used to recognize and delimit species within the genus. The most relevant characters are the asymmetry and shape of the left and right parameres, the presence or absence of sets of bristles or microbristles right beside the FLP sclerite, and the number of these sets of bristles. The parameres asymmetry is an important evolutionary character of the genus. This asymmetry may be light or strong. When the asymmetry is light, the parameres have a similar shape and the lengths are slightly different ( Figs. 4 View FIGURE 4 A–H, J–N, P–Q, S, U–V). However, if the asymmetry is strong, the shape of the parameres is completely different from one another ( Figs. 4I, O, R, T, W View FIGURE 4 ). The morphology and size of the FLP can vary within the genus, from an elongate ( Figs. 5 View FIGURE 5 A–G, I–K, M, O, U–V) to a short and truncate shape ( Figs. 5L, P, H, N, Q View FIGURE 5 , S–T, W). An additional sclerite ( AS) can be found between the sclerites of the A+SA complex and the FLP in some species (as Fig. 5B View FIGURE 5 ). 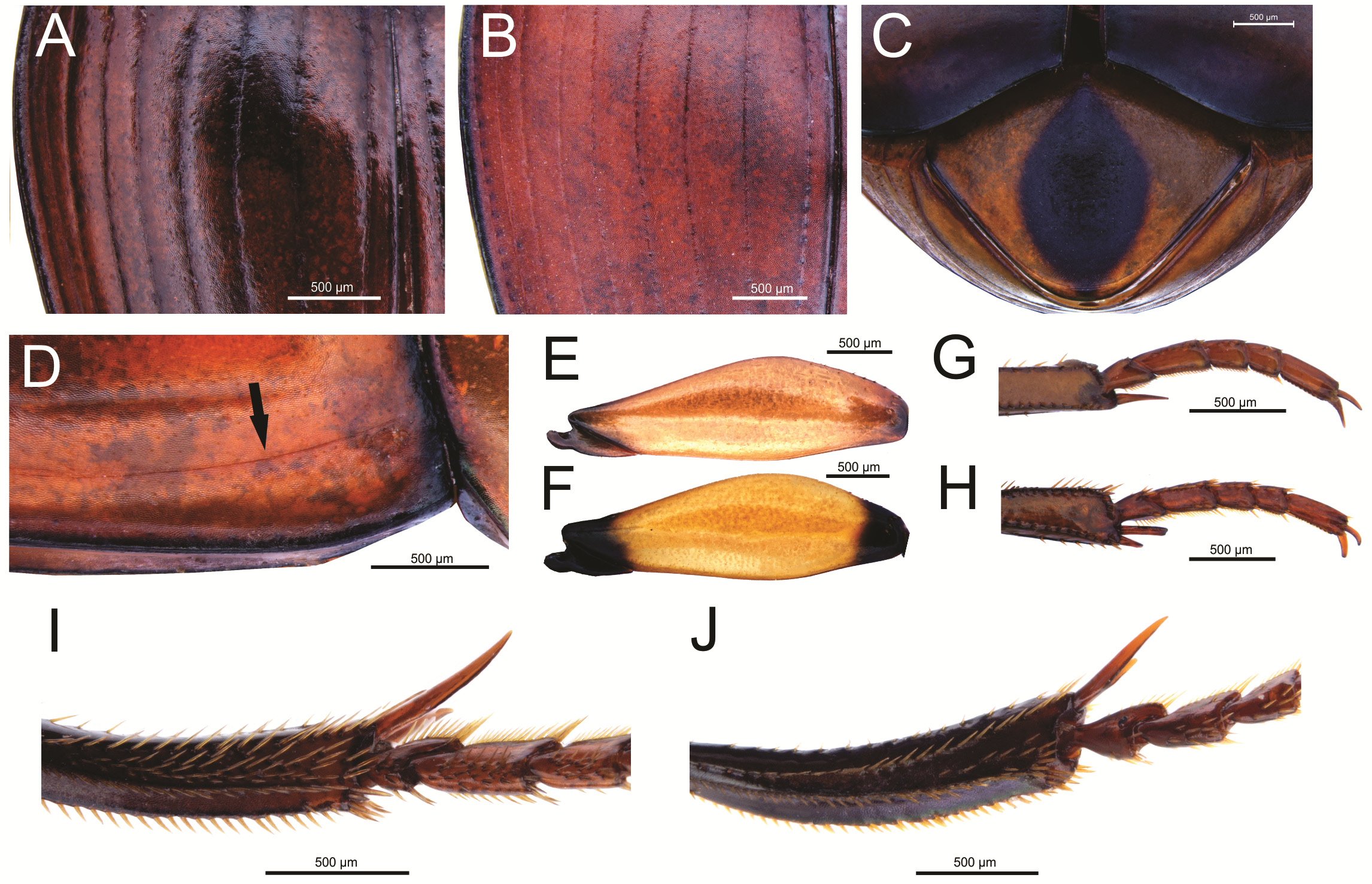 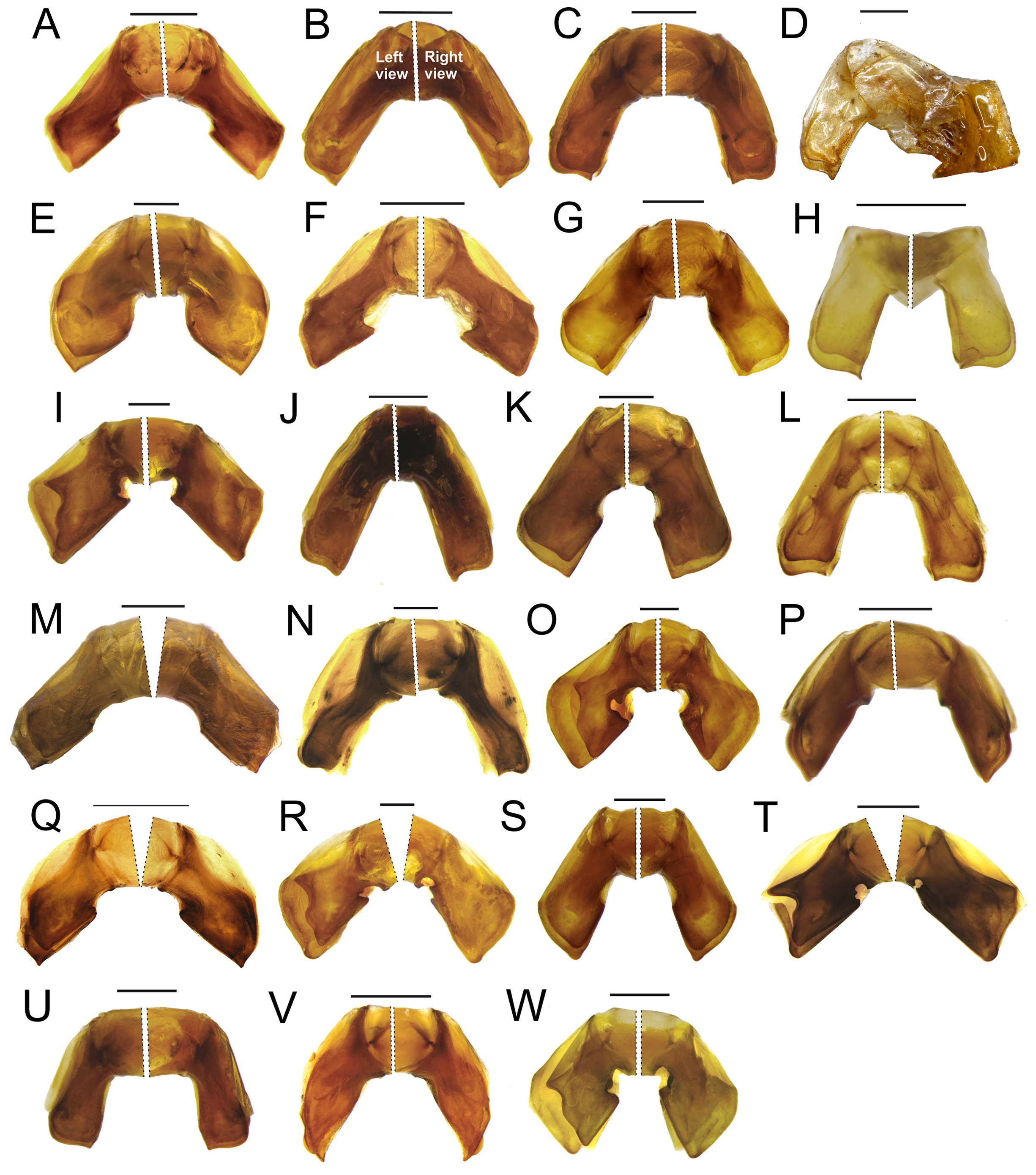 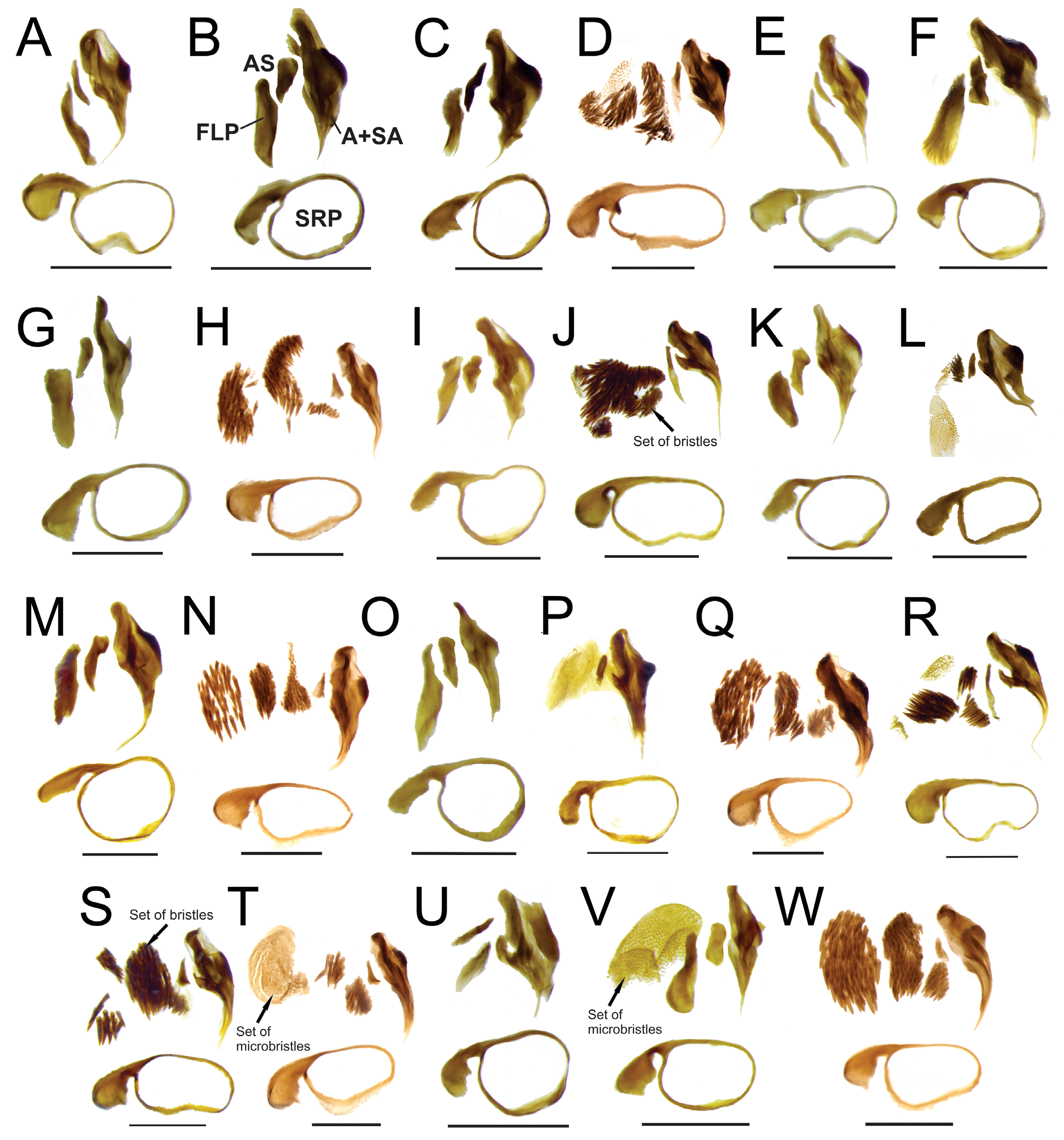 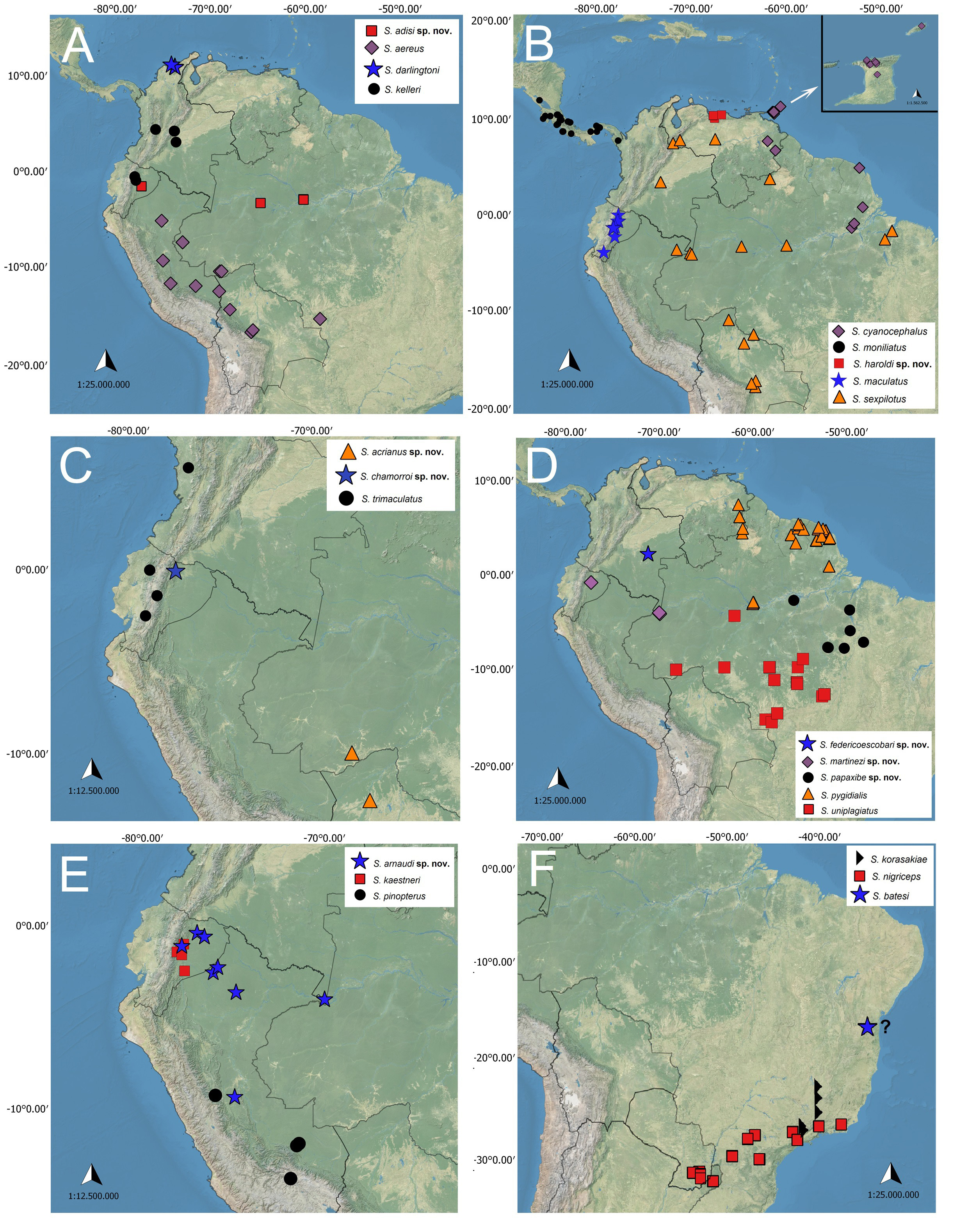