Etymology. Named in honor of Jim Henson, creator of the muppets who educated and entertained generations of children while they ate their eggs for breakfast. As Kermit the Frog famously sang, “It’s Not Easy Bein’ Green,” a fitting allusion to the one lineage of sacoglossans that evolved away from herbivory among their many green relatives.

Reproductive system. Gonad comprising multiple hermaphrodite follicles (hf) with irregular shape, slightly variable in size ( Fig. 5C View FIGURE 5 ). Multiple small ducts connect all follicles to one main hermaphrodite duct (hd) that expands forming one tubular ampulla (am). Ampulla occupies more than half of hermaphrodite duct. Hermaphrodite duct connects to male duct (md) proximally to ampulla expansion, and runs to oviduct on fertilization chamber (fc). Bursa copulatrix (bc) with its own aperture and one main duct connected to fertilization chamber; this organ was considered the vagina by Jensen (1996) but we use bursa copulatrix following Gascoigne (1975). Albumen gland (ag) highly branched over hermaphrodite follicles and with one connection to fertilization chamber at the same point as hermaphrodite ducts and one distal connection on bursa copulatrix duct. Genital receptacle (gr) as large as bursa copulatrix, also connected to fertilization chamber, closer to glandular oviduct (ov). Glandular oviduct with two distinct glands. Capsule gland (cg) innermost, larger, thicker and flimsy. Mucus gland (mg) next to female opening on right side of body, less translucent and firmer than capsule gland. Prostate gland (pr) formed by bilobed short gland, positioned anteriorly in animal body under intestine and over esophagus. Vas deferens (vd) long, ~3× longer than penis. Penis (pe) short and conical, with a terminal slightly curved stylet approximately 100 µm in length, about half as long as overall length of penis ( Figs. 6 View FIGURE 6 A–B).

Reproduction. Olea hensoni n. sp. was maintained in dishes in the laboratory for several days. After their host egg mass disintegrated, animals crawled around in the dish and on the surface tension, a habit also common in O. hansineensis . They laid whitish, spiral egg masses ranging from loosely to tightly coiled ( Fig. 1F View FIGURE 1 ). The egg ribbon was two embryos wide for the first (innermost) three whorls of one egg spiral, then was three embryos wide for the outermost two whorls.

Host ecology. Olea hensoni n. sp. was found on a large intertidal sand bar fronting a shallow bay on the Gulf coast of Florida, feeding in the gelatinous egg masses of an unidentified cephalaspidean ( Fig. 1G View FIGURE 1 ). Egg masses had developing veligers that hatched in the laboratory. No O. hensoni n. sp. were observed in any of the co-occurring, and similarly gelatinous, maldanid polychaete egg masses. Olea were found within the egg masses in manner similar to how O. hansineensis is found within the large, gelatinous egg masses of Melanochlamys diomedea ( Fig. 2C View FIGURE 2 ).

Distribution. Known only from the type locality in Cedar Key, Florida, U.S.A.

Remarks. In the original description, O. hansineensis was proposed to have affinity to the cladohepatic nudibranchs ( Agersborg 1923). The description noted that O’Donoghue hypothesized a separate family could be warranted to accommodate the morphological distinctiveness of O. hansineensis , for which the family Oleidae O’Donoghue, 1926 was subsequently erected. In O’Donoghue’s classification, some sacoglossan families were grouped with the cladohepatic nudibranchs, including Oleidae and ‘ Stiligeridae ,’ while the family ‘Hermaedidae’ was placed in a separate ‘Section Ascoglossa’. This system was rife with problems, including a non-monophyletic Sacoglossa , and the erroneous placement of numerous sacoglossan taxa; for instance, Aplysiopsis enteromorphae (Cockerell & Eliot, 1905) was classified as Phyllobranchopsis enteromorphae within the Stiligeridae , but actually belongs in Hermaeidae . Family Oleidae was later transferred to order Sacoglossa by Thiele (1931), whom Jensen (1996) gave as the authority for family Oleidae . Gascoigne (1975) synonymized Oleidae with Stiligeridae Iredale & O’Donoghue, 1923 . Jensen (1996) recognized that Limapontiidae Gray, 1847 had precedence over both Oleidae and Stiligeridae as the family name for ceratiform slugs including Olea . Our phylogenetic results support Jensen (1996) in keeping Olea within Limapontiidae , which would be rendered paraphyletic if the oophagous taxa were placed in a separate family.

The highly reduced radula of O. hensoni n. sp. was also comparable to that of O. hansineensis , comprising one spur-shaped active tooth of reduced size; an ascending limb of connected, cylindrical teeth with no obvious tip or cutting edge; and a descending limb with the same number of rod-shaped pre-radular teeth as reported for O. hansineensis ( Gascoigne 1975) . Only one fully formed tooth was present in all specimens of O. hensoni n. sp. analyzed, whereas Gascoigne (1975) reported intraspecific variation in the number of fully formed teeth in O. hansineensis . Also, the ascus in both Olea spp. is extremely reduced. In contrast, the radula of Calliopaea is similar to that of herbivorous sacoglossans, comprising ascending and descending limbs each with a row of fully formed, chisel-shaped teeth ( Gascoigne & Sigurdsson 1977; Gascoigne & Todd 1977). The radular morphology as well as genetic affinity for O. hansineensis both support the generic placement of O. hensoni n. sp. The absence of an esophageal pouch, described here for O. hensoni n. sp., was also previously reported for C. bellulla ( Gascoigne & Todd 1977) , but was not analyzed for O. hansinensis . This structure is observed in the great majority of Sacoglossa ( Jensen 1996) and is probably an adaptation for suctorial feeding on algae.

The reproductive system of O. hensoni n. sp. was similar in nearly all respects to that of O. hansineensis except that in O. hansineensis , no vaginal opening was detected; instead an internal bursa copulatrix was reportedly anchored to the right body wall, suggesting hypodermic insemination was necessary to effect transfer of allosperm ( Gascoigne 1975). In contrast, a vaginal pore was present on O. hensoni n. sp., and also on C. bellula ( Gascoigne & Todd 1977) . The penial stylet of O. hensoni n. sp. (~ 100 µm on a 2.5 mm long animal) was much more similar in size and shape to that of O. hansineensis , 120 µm long on a 6 mm long animal ( Gascoigne 1975), than to the elongated stylet of C. bellula (460 µm long on a 3 mm long animal; Gascoigne & Todd 1977). The bursa copulatrix of both Olea spp. is comparatively short compared to the elongated bursa in Calliopaea , which Gascoigne & Todd (1977) proposed was necessary to accommodate the proportionally longer penial stylet of C. bellula .

Although we are not aware of any modern records, Stiliger pusillus was described as externally similar to both Calliopaea and Olea , with comparable body coloration, short and simple rhinophores, and just three fusiform cerata on the posterior half of the body ( Baba 1959, plXXVII, fig. 1). Data on the internal morphology of this species are limited to the radula, which was figured with three well-formed teeth on the ascending limb and six on the descending limb; teeth were drawn as angled and pointed, similar to those of Calliopaea ( Baba 1959, pl XXVIII, fig. 1). Baba & Hamatani (1970) suggested S. pusillus should be transferred to Calliopaea , which would extend the range of this genus to span both Atlantic and Pacific Oceans like Olea . We concur that Calliopaea is likely the correct generic assignment for S. pusillus but formal reassignment should await either molecular data or a comprehensive revision of Calliopaea , including a reassessment of C. bellula versus C. oophaga .

Both O. hansineensis and Calliopaea feed on a diversity of heterobranch eggs ( Crane, 1971; Jensen 1986), making it likely that O. hensoni has a similarly broad diet. Because of their large, bulky nature, cephalaspid egg masses may be more easily entered by oophagous slugs than the narrower egg strings of other heterobranchs, and thus constitute preferred prey; alternatively, oophagous slugs may be more apparent within transparent cephalaspid egg masses and thus simply be more frequently observed feeding on cephalaspidean embryos. The sand bar at Cedar Key has a rich invertebrate fauna that includes diverse heterobranchs that could produce egg masses serving as suitable prey: Cerberilla tanna Marcus & Marcus, 1960 , Spurilla braziliana MacFarland, 1909 , Okenia aff. aspersa (Alder & Hancock, 1845) , Haminoea succinea (Conrad, 1846) , and Elysia cf. velutinus Pruvot-Fol, 1947 ; several of these species can occur in large numbers, but none produces the type of egg mass in which O. hensoni was found. The species producing the egg masses in which O hensoni n. sp. was found were not encountered and attempts at barcoding the egg mass were not successful. The discovery of this species in a well-studied intertidal area underscores how poorly we know the marine biosphere. 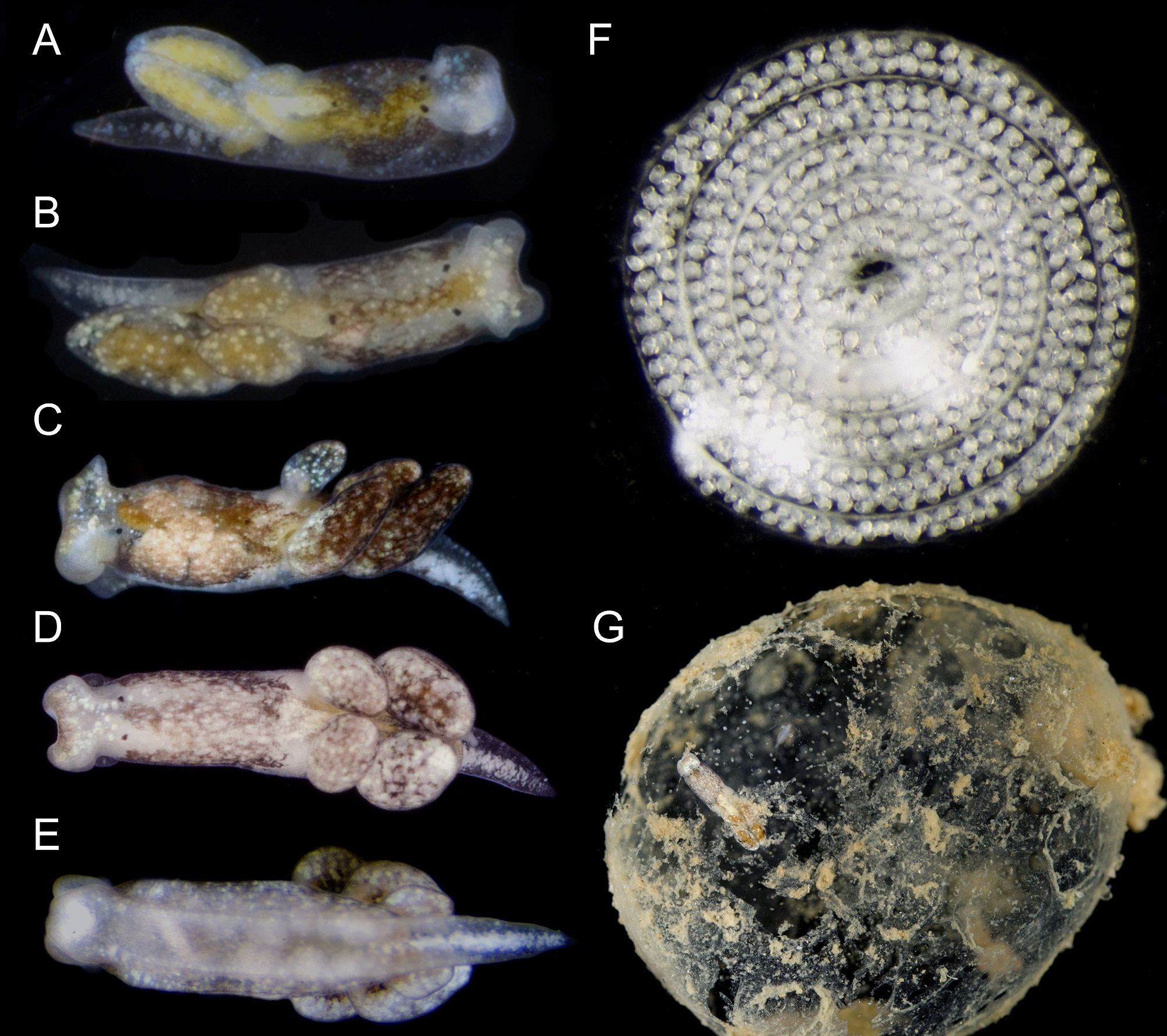 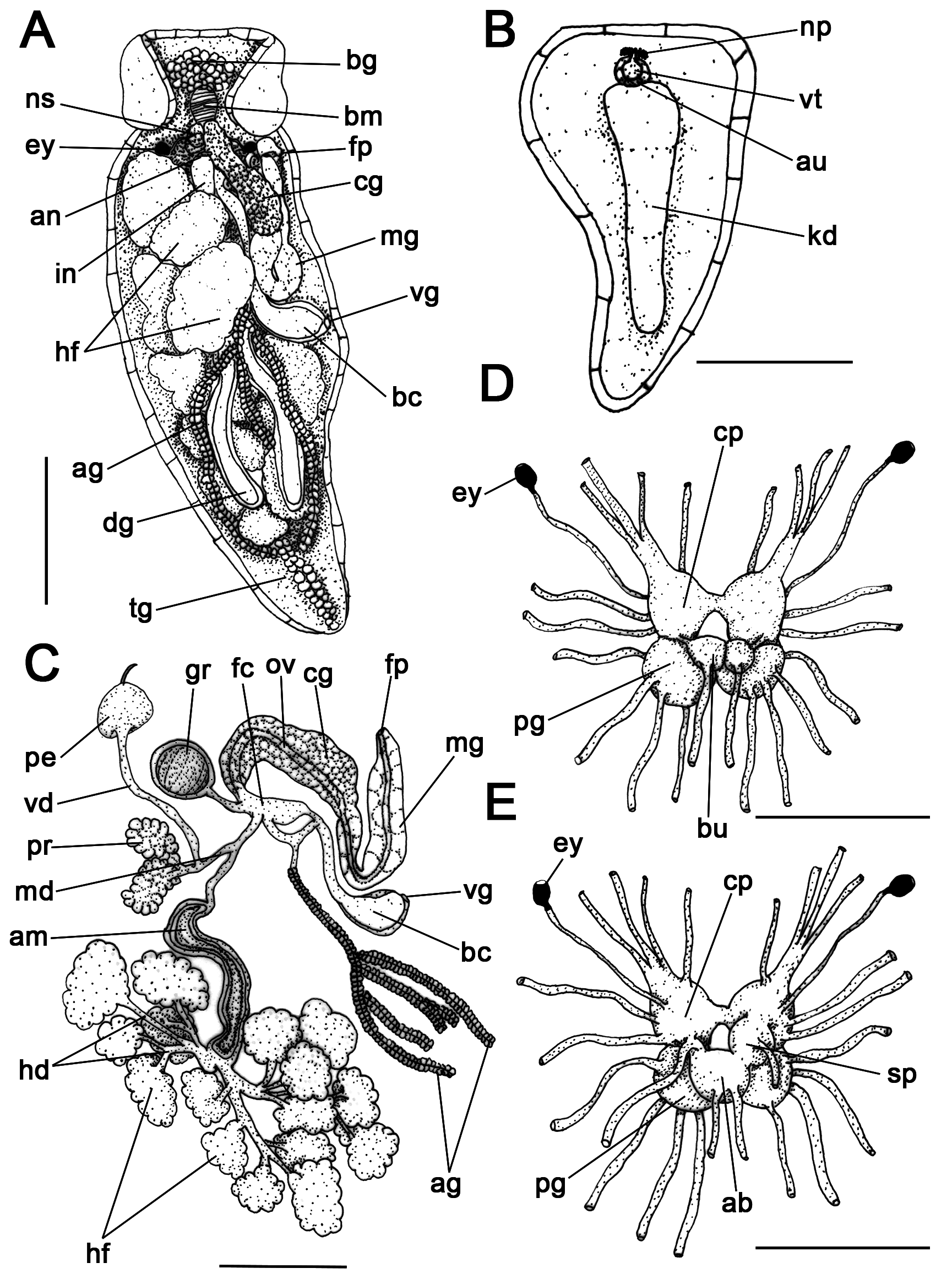