Remarks. Nutting (1900) founded as distinct species two very similar plumulariid hydroids from upper bathyal waters in the southern Straits of Florida. Antennopsis nigra , based on a colony reaching 14 cm high, was collected off Havana, Cuba (Albatross Station 2330: 23°11’N, 82°19’W, 221 m). Antennopsis longicorna , described from an incomplete colony reaching 5 cm high, came from a station less than 2 km away (Albatross Station 2335: 23°11’N, 82°20’W, 373 m). While acknowledging that A. longicorna was “very near A. nigra and may be identical with it”, Nutting nevertheless considered it a distinct species based on the particularly long apophyses found in the fragmentary type specimen. With the character used to separate them likely being at least somewhat variable, A. nigra and A. longicorna are treated here as conspecific. Of the two simultaneous synonyms, nomenclatural precedence is assigned to the binomen A. nigra under the First Reviser Principle (ICZN Art. 24.2) for two reasons. The valid name is based on a more complete type colony, and the specific name is more applicable inasmuch as both hydroids have black or nearly black hydrocauli and main branches. With Antennopsis Allman, 1877 currently being considered a subjective junior synonym of Nemertesia Lamouroux, 1812 ( Bouillon 1985: 170), the correct binomen of the species is N. nigra , as applied to it by Calder (2004b: 18) and Ramil & Vervoort (2006: 124).

The original description of Antennopsis sinuosa Fraser, 1947b from Aruba, in the southern Caribbean Sea (SW of San Nicolaas Bay, 42–44 m), differs little from that of Nemertesia nigra . Secondary accounts of the two in Ramil & Vervoort (2006) also provide no conclusive way of distinguishing them. Type material of A. sinuosa at the Santa Barbara Museum of Natural History (SBMNH 347081; SBMNH 36946) was examined and briefly described by Calder et al. (2009), but no characters differentiating the species from N. nigra were mentioned. The two are taken here to be conspecific. Other than under the names of its two synonyms, N. nigra has not been reported since its original description until now.

Nutting (1900) described a third species that he assigned to Antennopsis from waters off Havana (Albatross Station 2322: 23°11’N, 82°18’W, 210 m). Antennopsis distans was distinguished in having widely separated hydrothecae that were said to occur towards the distal ends of long, slender internodes. Hydrocladia were also described as having 2–3 athecate internodes basally, but with the remaining internodes being mostly thecate. These characters, if constant, seem to differentiate the species from N. nigra . It is therefore retained as valid here, although uncertainty of its distinctness remains. More material is needed to determine the extent of intraspecific variation within this group of hydroids, and whether a single variable species is represented. Gonothecae were present in Nutting’s type of A. distans .

A character apparently overlooked in earlier descriptions of Nemertesia nigra , but noted in material examined here, is a pronounced thickening of the perisarc over the inner 2/3–3/4 or so of the hydrothecae, especially in older ones. The hydrothecal wall then thins abruptly and remains slender the rest of the way to the rim. When viewed laterally, the hydrotheca is marked by a faint line at the point of transition between thick and thin perisarc. The species is also distinctive in colony form, having a polysiphonic, non-canaliculated, strongly geniculate hydrocaulus with alternate or mostly alternate branches that are branched a second and sometimes a third time, with branching sometimes appearing to be dichotomous. Hydrocladia are heteromerously segmented and arise from the secondary and tertiary branches. Gonothecae of this species have yet to be described.

Nemertesia nigra is little-known, having been reported to date only from the southeastern Gulf of Mexico, and if the synonymy with N. sinuosa is correct from the southern Caribbean Sea. This is the first record of the species from Florida. Its known bathymetric range is from 42 m ( Fraser 1947b, as Antennopsis sinuosa ) to 373 m ( Nutting 1900, as Antennopsis longicorna ). 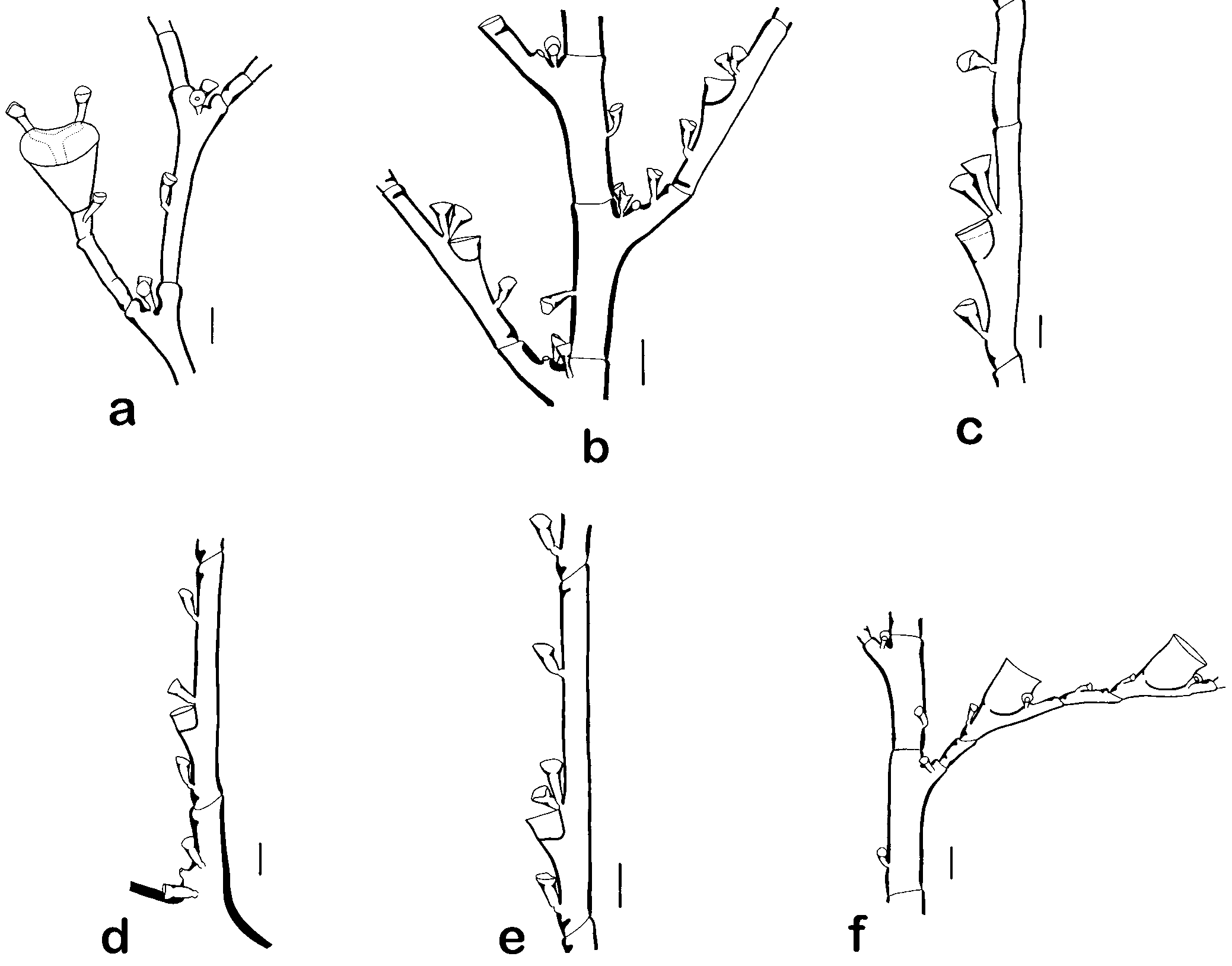