Remarks. Calyptospadix cerulea Clarke, 1882 was originally described from Hampton Roads, Virginia, at the mouth of the James River estuary. The species has been reported relatively few times under that name, mostly from areas of reduced salinity along the Atlantic coast of North America ( Fraser 1944). Much resembling it is the more widely reported Bimeria franciscana Torrey, 1902 , first discovered in the San Francisco Bay estuary on the Pacific coast of the United States. That hydroid is commonly believed to be an invasive estuarine endemic with a disjunct but widespread geographic distribution in temperate and tropical regions. The only apparent morphological difference between the two putative species is the supposed number of planulae generated per female sporosac, with several originally reported in C. cerulea and one in B. franciscana . On examining specimens of the common morphotype from Virginia during this study, some colonies had gonophores with a single egg cell, corresponding to B. franciscana , while others had several cells or possibly zygotes, corresponding to C. cerulea . The latter were interpreted as cell aggregations resulting from cleavage of the single egg. Hydroids of the two were otherwise indistinguishable. Meanwhile, specimens examined here from Fort Myers Beach (ROMIZ B4417) had, on the same colony, some female gonophores with a single egg and others containing a varying number of cells. The latter were again taken to have been the result of cell division. While gonosomes of the two supposed species may differ, the apparent difference is believed to simply reflect different stages of embryological development. Thus, C. cerulea and B. franciscana are treated here as conspecific. Molecular analyses of populations from the two type localities, and ones supposedly differing in their gonosomes, are nevertheless needed to better resolve the synonymy of the two. Of the two subjective synonyms, the junior name ( B. franciscana ) is the more familiar. However, nomenclatural stability is not greatly threatened by application of the Principle of Priority, and C. cerulea is adopted here as the name of the species.

A change in the binomen Bimeria franciscana is necessary in any case because the species has been assigned to the wrong genus. These hydroids have been referred in most recent works to Garveia Wright, 1859 , as G. franciscana or G. cerulea . However, specimens do not match the diagnosis of that genus, as outlined by Schuchert (2007). Instead, Calyptospadix Clarke, 1882 is recognized here as valid, referable to family Bougainvilliidae Lütken, 1850 , and the original binomen of the species ( Calyptospadix cerulea ) is restored. Meanwhile, Garveia was recently removed from Bougainvilliidae to Pandeidae Haeckel, 1879 in having vasiform hydranths surrounded by pseudohydrothecae, and notably robust hypostomes (see Calder 2017). Molecular data in Prudkovsky et al. (2016) provide additional support for assignment of Garveia to Pandeidae . As noted earlier, Bougainvilliidae as presently constituted is taken to be polyphyletic ( Mendoza-Becerril 2018a).

Hydroids identified here as C. cerulea were abundant on a floating dock at 26°38.790’N, 81°52.354’W in the Caloosahatchee River estuary at Fort Myers, Florida, during July 2012 (ROMIZ B4340, ROMIZ B4341). In the aftermath of Hurricane Irma passing through south Florida in September 2017, a massive discharge of fresh water passed through the estuary from Lake Okeechobee upstream. Colonies of C. cerulea disappeared at that location un- der salinities of less than 1‰ and were replaced by the more fresh-water tolerant Cordylophora caspia . Instead, hydroids of the species appeared down-estuary in Estero Bay on floating docks at Salty Sam’s Marina (26°27’21.7”N, 81°56’34.6”W), San Carlos Island, in winter 2018 (ROMIZ B4342). Colonies with abundant female gonophores were found at the same location in late summer 2018 ( ROMIZ B4418 ) .

Calyptospadix cerulea has been reported elsewhere on the Gulf coast of Florida from Crystal Beach Spring ( Garman et al. 2011, as Garveia franciscana ). The report of Bimeria franciscana by Joyce (1961) from Seahorse Key, on the Florida Gulf coast, is based on a misidentification of B. humilis Allman, 1877 , as noted elsewhere. Also likely misidentified are reports of the species by Fox & Ruppert (1985), as Garveia franciscana , from typically high salinity areas in coastal South Carolina. The species is regarded as an estuarine endemic, with a reported bathymetric range of 0–5 m ( Calder & Cairns 2009). 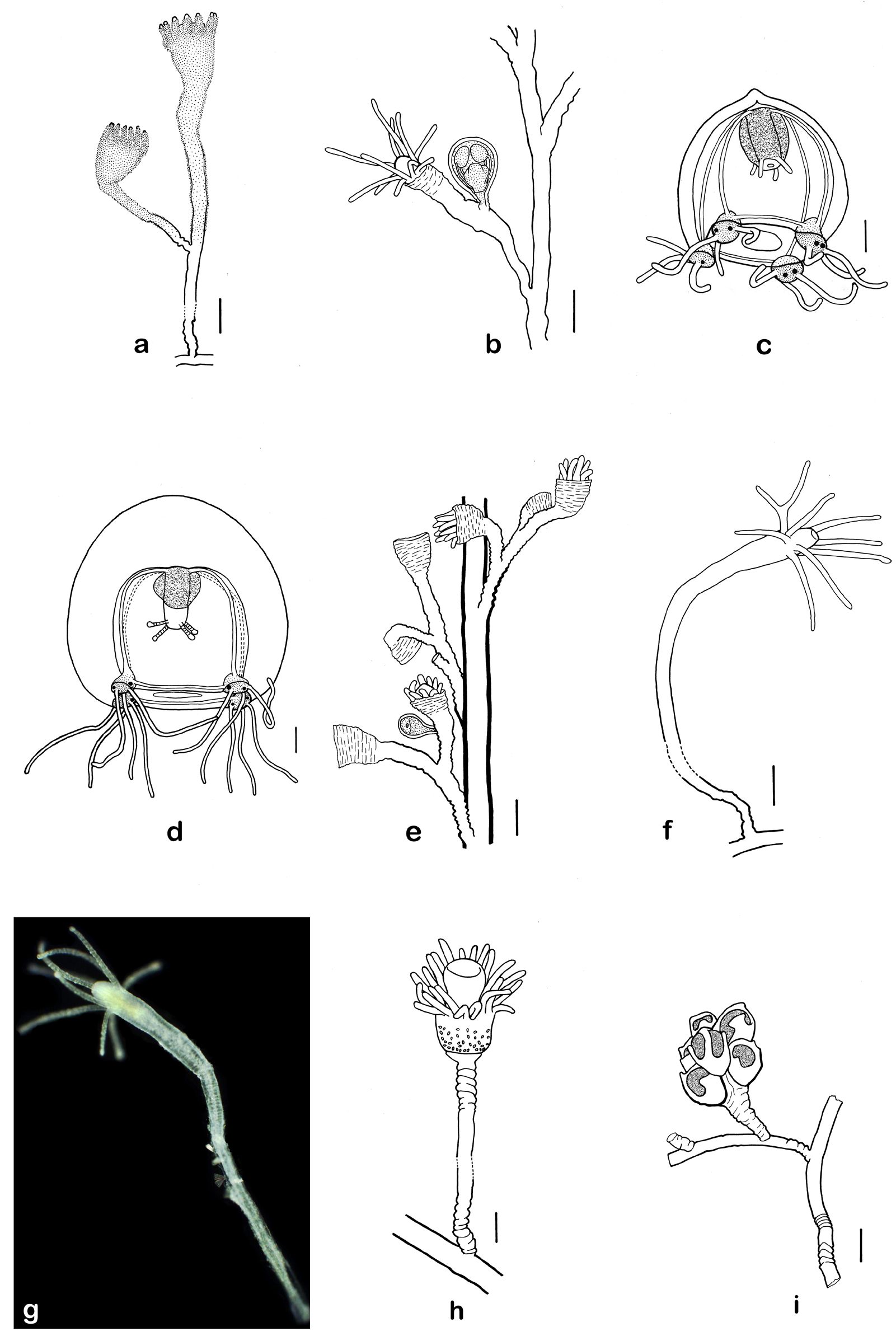