Diagnosis:—This species is most similar to Myrcia neoobscura E. Lucas & C. E. Wilson (in Lucas et al. 2016: 680), from which it is distinguished by having the midvein of leaf blade glabrous below (versus strigose in M. neoobscura ), glaucous fruits (vs. blackish), and 5–6 calyx lobes (vs. 4 in M. neoobscura ).

Distribution, habitat and phenology:— Myrcia glaucocarpa grows in seasonal flooded Amazonian forests in Amazonas Department between 200–250 m elev.; this species seems to be endemic to Colombia. Myrcia glaucocarpa has been collected with fruits in September.

Conservation:—Although Myrcia glaucocarpa is known from three different localities in the Amazonas department in Colombia, the Amazonian region is still undersampled and it is difficult to evaluate its conservation status; at the moment, I assess it conservation status as Data Deficient, or DD, following IUCN Red List criteria ( IUCN 2019).

Etymology:—The specific epithet of the new species refers to its glaucous fruits, an uncommon character among species of Myrcia .

Affinities:— Myrcia glaucocarpa is apparently related to M. neoobscura from Brazil, and both species can be differentiated by the characters mentioned in the diagnosis. Calyx remnants in some fruits of Myrcia glaucocarpa have 5–6 irregular lobes, but such lobe numbers are not constant in all fruits of the holotype; in some fruits there seems to be remnants of only four lobes, but it is difficult to be sure due to the poor shape of the remnants. Due to its irregular calyx lobes, it is possible that Myrcia glaucocarpa is related to the species formerly assigned to genus Marlierea ; such species are placed today into three different monophyletic clades within Myrcia ( Lucas et al. 2011) . Flowering specimens are in need to establish Myrcia glaucocarpa affinities within Myrcia .

Myrcia glaucocarpa fruits are covered with a glaucous layer that cracks in small patches ( Fig. 11 D View FIGURE 11 ); the nature of this layer is not known yet, but fungus or another organism growing on the surface of the fruit are discarded. All cited paratypes of Myrcia glaucocarpa do not have flowers or fruits, but they present globose galls ( Figure 11 B View FIGURE 11 ) that are similar in shape to the holotype’s fruits.

The innermost marginal vein of the holotype of Myrcia glaucocarpa is less arched than the same structure on the paratypes cited here, but I consider that this minor difference is part of the existing variation among this species . 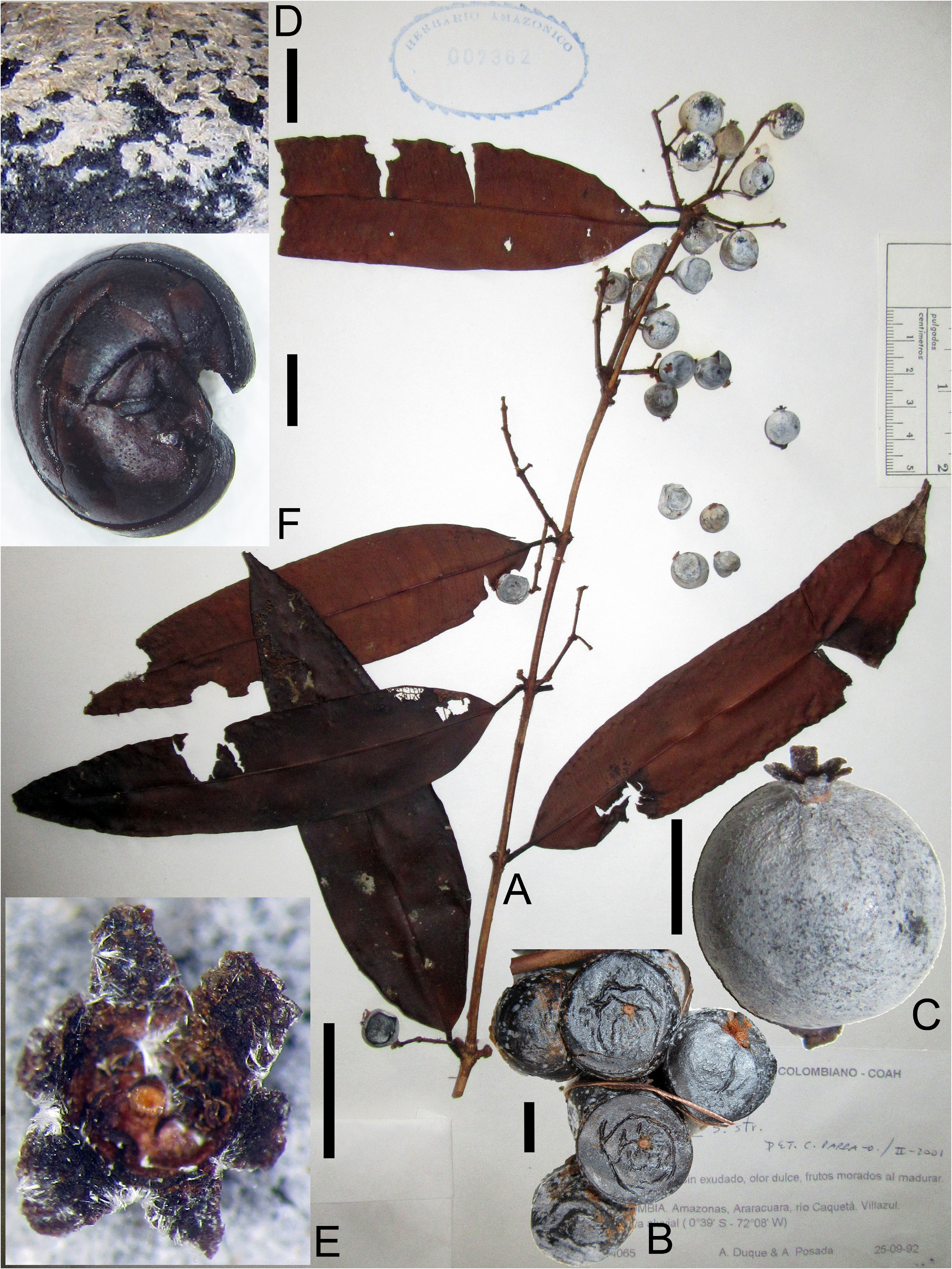