External morphology. Measurements of important morphological parameters were taken from 23 specimens (11 males, 12 females) from Nosy Be, six specimens (five males, one female) from Montagne d’Ambre, and another nine specimens without exact locality data ( Table 1). Because there was only one female from Montagne d’Ambre available, only males from both species were considered for comparison of body size, extremities and appendages. The specimens without localities were not included in mean value calculations but could be assigned according to their morphology to the Nosy Be morphotype (four specimens) and the Montagne d’Ambre morphotype (five specimens), respectively.

Both populations show heterogeneous scalation, especially at the extremities and the rostral appendage. The enlarged rounded tubercles on the limbs are distinctly larger in animals from Montagne d’Ambre; the mean diameter of the largest tubercle of the upper arm is 0.64 mm compared to 0.36 mm ( Nosy Be). Additionally the number of the enlarged tubercles on the upper arm of males from Montagne d’Ambre is approximately twice that of males from Nosy Be, with a mean of 20.2 compared to 9.9, respectively, and the tubercles are not bordering each other on Nosy Be individuals. This character is also confirmed from a juvenile of SVL 26.9 mm ( ZFMK 48227, Nosy Be) and a juvenile of SVL 36.2 mm ( ZFMK 52308, Joffreville). Another morphological difference between both populations can be found in the pholidosis of the rostral appendage. Although the rostral appendage is significantly smaller in males from Nosy Be (see above), they have more peripheral scales on it, with a mean of 18.9 compared to 15.5 in Montagne d’Ambre males. In relation to the size of the appendage, this means 6.1 scales per mm compared with 4.1 scales per mm in Montagne d’Ambre. In summary, specimens from Montagne d’Ambre show a more heterogeneous scalation with broader tubercles on extremities and the rostral appendage. This is true of females as well (note that only one female with locality data was examined). Montagne d’Ambre individuals differ also in both sexes from Nosy Be specimens in the presence of a parietal crest which is best visible in the micro-CT scan (see below).

The other morphological features either were highly variable or did not differ between the populations. For example, the number of dorsal cones was 0–28 in Nosy Be, and 9–13 in Montagne d’Ambre. Likewise the edges of the occipital lobes vary between the specimens. They range between un-notched and clearly notched (up to 0.7 mm) in Nosy Be, and are either not or only slightly notched (up to 0.3 mm) in Montagne d’Ambre. All specimens have a rostral crest and none have axillary pits.

Colouration. Males also show great differences between the populations in colouration (see Fig. 2View FIGURE 2 A, B). Males from Montagne d’Ambre were more colourful, with a true blue rostral appendage and greenish turquoise extremities ( Fig. 2View FIGURE 2 A). The colour of the legs is induced only by the coloured tubercle scales. The body is pale green or light brown with two dark brown spots and (occasionally) a beige lateral stripe on each side that stops at the base of the tail. The tail is the same colour as the body and (in stress colouration) possesses black annulations. The head is also greenish or brown with a dark stripe from the snout crossing the eyes to the occipital lobes. The skin around the mouth and the throat can be white. The colour description is based on a total of seven pictures of the Montagne d’Ambre form, referred to as C. boettgeri  in Schmidt et al. (2010), C. boettgeri  (picture 1 c) in Glaw & Vences (2007) Calumma  sp. in Nečas (2004) and C. boettgeri  in Garbutt et al. (2001). The body and head of females is brown; the rostral appendage can be coloured bright blue, see picture of C. boettgeri  in Schmidt et al. (2010).

The body colouration of males from Nosy Be in contrast is yellowish or greenish brown with little dark brown rosettes, when stressed ( Fig. 2View FIGURE 2 B). The legs are brown with little blue or green spots resulting from the tubercles. The colouration of the head is similar to the body colouration. The rostral appendage differs clearly from Montagne d’Ambre with the absence of any striking colour and is the same brown colour as the casque. Females are uniformly light or greenish brown coloured. Compare also a total of seven pictures of Calumma boettgeri  in Hyde Roberts & Daly (2014), in Glaw & Vences (2007: 191) picture 1 a and 1 b, in Nečas (2004) and in Henkel & Schmidt (1995).

Osteology of the skull based on micro-CT scans. Micro-CT scans of heads of two males and two females from Nosy Be and from Montagne d’Ambre exposed additional differences between the two forms. Specimens from Montagne d’Ambre ( Fig. 4View FIGURE 4, D and E) bear tubercles on the parietal in both sexes. These form a little parietal crest in the middle with three to four tubercles, laterally followed by two tubercles on each side. The frontal is also irregularly spotted with tubercles. The parietal and frontal of animals from Nosy Be in contrast are smooth ( Fig. 4View FIGURE 4, A and B).

As in all species of the genus Calumma  , the nasal bones are paired ( Rieppel & Crumly 1997). These are broader in our specimens from Montagne d’Ambre (mean NW 0.35 mm vs. 0.24 mm in Nosy Be; mean NW/NL 0.18 vs. 0.14, Table 3, Fig. 4View FIGURE 4) and the anterior tip of the frontal bone does not exceed more than a half of the naris. In skulls from Nosy Be it does exceed this point, and the frontal meets the premaxilla, as described for C. nasutum ( Rieppel & Crumly 1997)  . The parietal also varies between the two localities. In Nosy Be samples, the parietal tapers more tightly. Its diameter is at the tightest area on average 0.61 mm (vs. 1.06 mm) and 11 % of the largest diameter of the parietal (vs. 22 %, Table 3, Fig. 4View FIGURE 4). The parietal in Montagne d’Ambre samples appears wider and more compact. However, the form of the parietal is variable within localities and cannot be used as a diagnostic character. Although chameleons are sexually dimorphic animals, differences between sexes in skull structure were not proven ( Table 3). 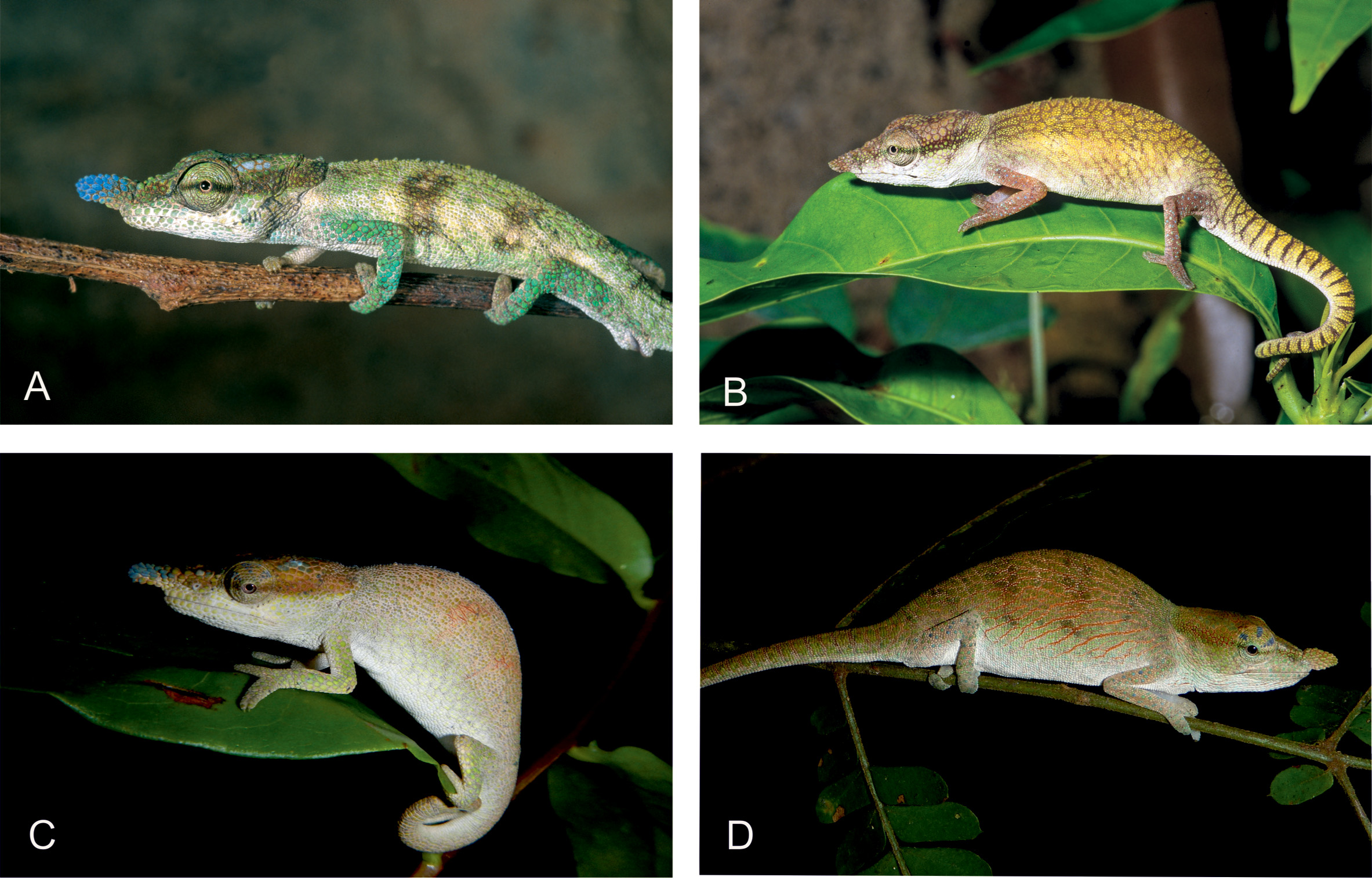 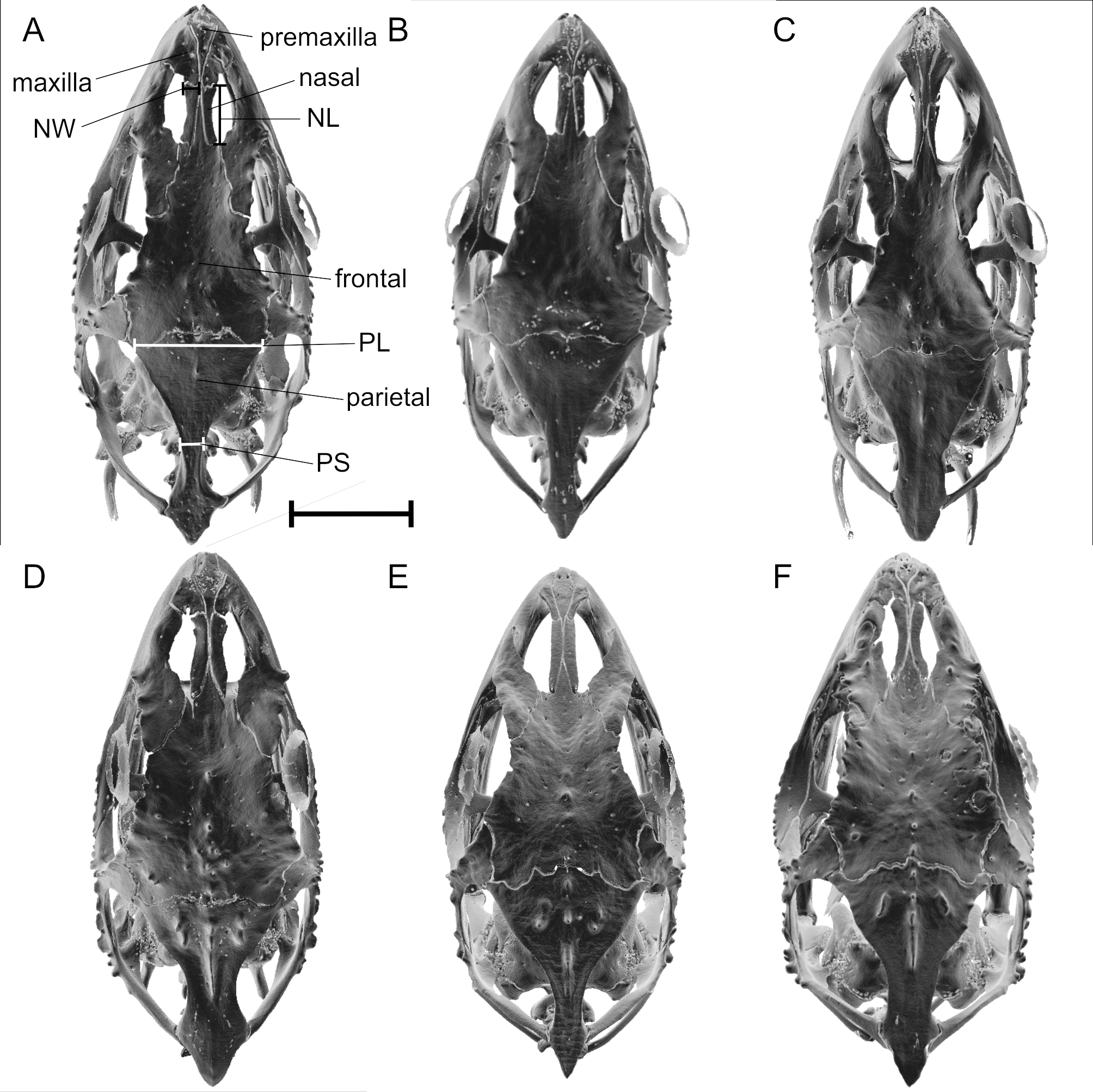 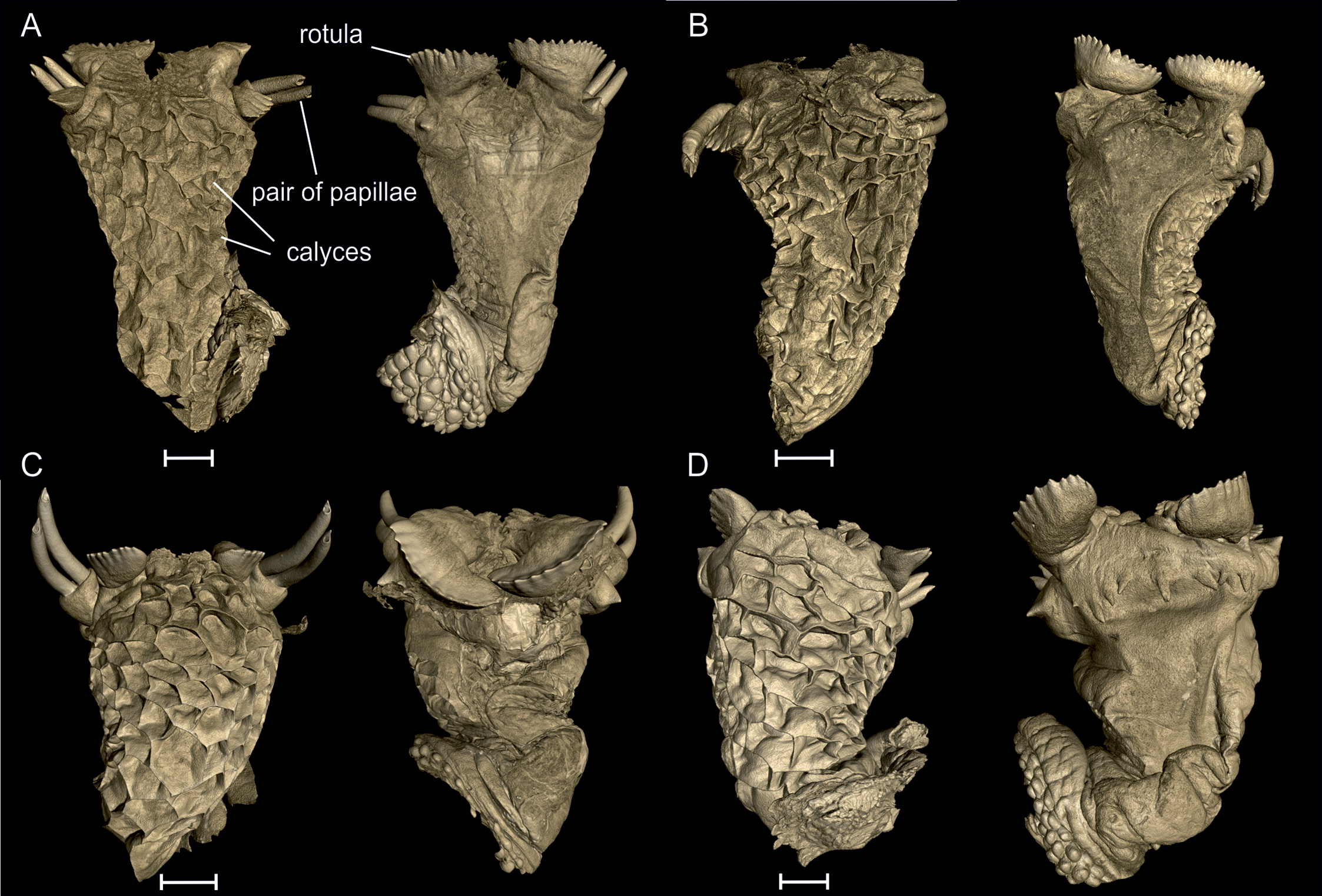 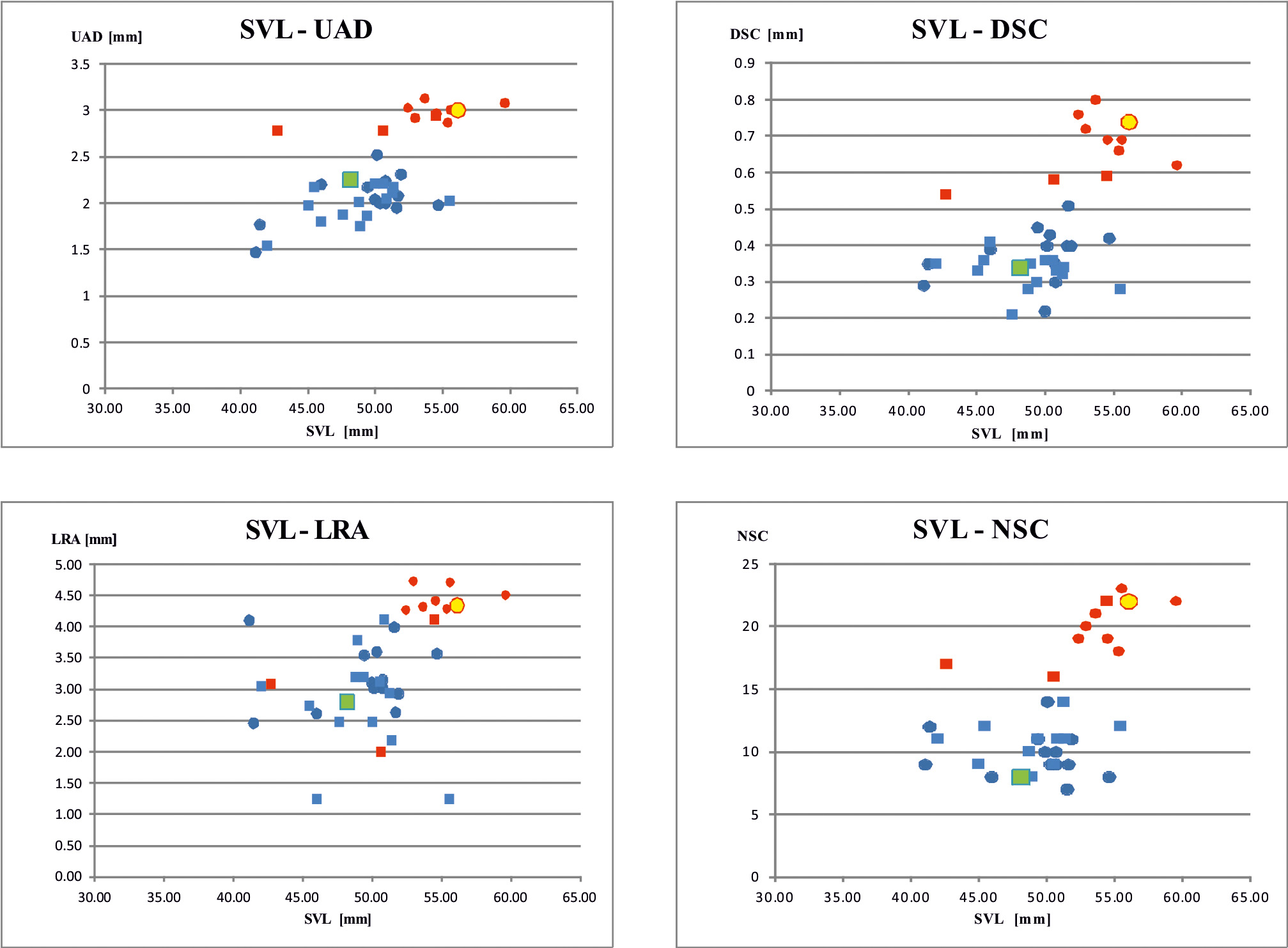