Etymology. Named schorri (Latinized name) in honor of our friend and colleague Martin Schorr, in recognition of his contributions to our knowledge of Odonata through the establishment of the International Dragonfly Fund, which has supported the research of countless odonatologists worldwide, his compilation of the Odonatological Abstract Service, and editing of the IDF-Reports for the past twenty years.

Genital ligula ( Fig. 142 View FIGURES 142 – 144 ) consisting of a long ridged flagellum, with a pair of entolaterally directed quadrate lobes at base.

Diagnosis. Species unique in the male by diminutive rim-like torus and adjacent torifer completely overlapping epiproct ( Fig. 162 View FIGURES 161 – 164 a, c), and in the female by the placement of recurved mesostigmal lobe on lateral branch of middorsal carina. In addition, the genital ligula consisting of a long, ridged single flagellum and a pair of entolaterally directed quadrate lobes at base ( Fig. 142 View FIGURES 142 – 144 ) and the shortened pterostigma covering only one cell ( Fig. 125 View FIGURES 124 – 125 ) will easily serve to distinguish this species. The male appendages of A. schorri ( Fig. 162 View FIGURES 161 – 164 ) are superficially similar to those of A. popoluca ( Figs. 163, 164 View FIGURES 161 – 164 ), as well as its color pattern ( Figs. 129 View FIGURES 129 – 131 ; 188, 189). However, A. popoluca differs from A. schorri by its male tori broadly ovate, occupying the ventral half of the torifer and not overlapping the epiproct ( Figs. 163 View FIGURES 161 – 164 a, c, 164a, c) and by its two long flagella united basally by a common stem, broadened laminate base and lack of a pair of entolaterally directed quadrate lobes at base of genital ligula ( Figs. 143, 144 View FIGURES 142 – 144 ). In the field, male A. popoluca have smaller postocular spots that are not confluent with the eye, and the pale middorsal stripes are more extensive, often attaining the apical 0.20 of S6 ( Figs. 188, 189 View FIGURES 187 – 190 ). In the female, the mesostigmal lobes occupy the medial 0.50 of the hind margin of the mesostigmal plate, and are large broadly upright foliate structures that are almost approximate. Most females of A. popoluca have mesostigmal lobes as shown in Fig. 123 View FIGURES 121 – 123 , but one female ( Costa Rica: Braulio Carrillo National Park) has a strongly recurved lobe medially ( Fig. 122 View FIGURES 121 – 123 c, d, e). It was collected with a male the appendages of which are typical for this species.

Argia popoluca is apparently a variable species. Calvert (1902) in his original description mentions four postquadrangular cells in the Fw, and most material we have examined from Mexico sustains Calvert’s observation. Specimens from farther south generally have only three Fw postquadrangular cells. The extent of the middorsal blue stripe is also variable, extending for most of the dorsum on S3 variably through S7 ( Figs. 188, 189 View FIGURES 187 – 190 )1.

Remarks. The small series (including holotype) of four males from Golfito was apparently exposed to 1. Garrison et al. (2003) examined the syntypes of Argia variata Navás, 1935 , stating that “… A. variata is a bona fide species in the [A.] gerhardi [ Calvert, 1909]/ nigrior [ Calvert, 1909] group.” Further examination of specimens of A. popoluca from over its entire range show that South American material previously referable to A. variata do not significantly differ from Central American material currently going under the name of A. popoluca . The genital ligula morphology of A. variata is the same as for Central American specimens, and all specimens differ from species (including type material) previously included within the A. gerhardi / kokama / nigrior complex. Correspondingly, we consider Argia variata Navás, 1935 , to be a junior synonym of A. popoluca Calvert, 1902 .

Habitat. Small trickles within primary and secondary forests. On 31 May 2013, we attempted to locate this species at its type locality (2.8 mi E of Golfito) but were unsuccessful, probably due to overcast weather and intermittent precipitation. The area consisted of a small shaded stream within shaded forest, and no Odonata were seen. Specimens have been collected at elevations ranging from about 35 m (2.8 mi E of Golfito) to 275 m (2 km NE of Uvita), ranging from July (2.8 mi E of Golfito) to November (2 km NE of Uvita). Haber noted the following for two males and female collected at Finca Carolina: "[male & female] Perched on shrubs in sunny spot on high bank of tiny trickle down steep hillside" and [male taken in] "Light gap on high bank of tiny forest trickle down steep hillside".

Distribution. Known so far only from the southern Pacific side of Costa Rica, where it is sympatric with its similar-looking congener A. popoluca ( Fig. 170 View FIGURES 169 – 170 ). 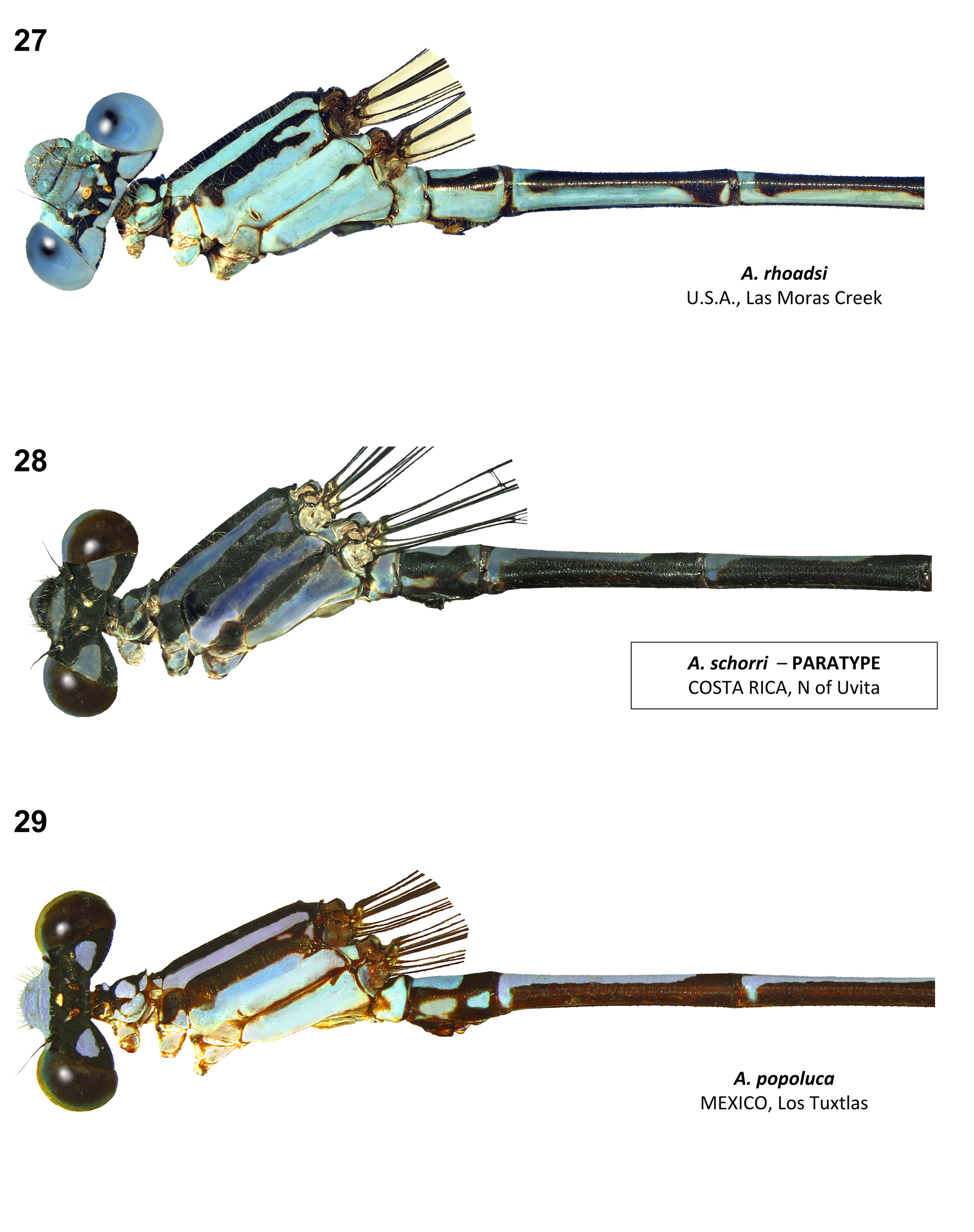 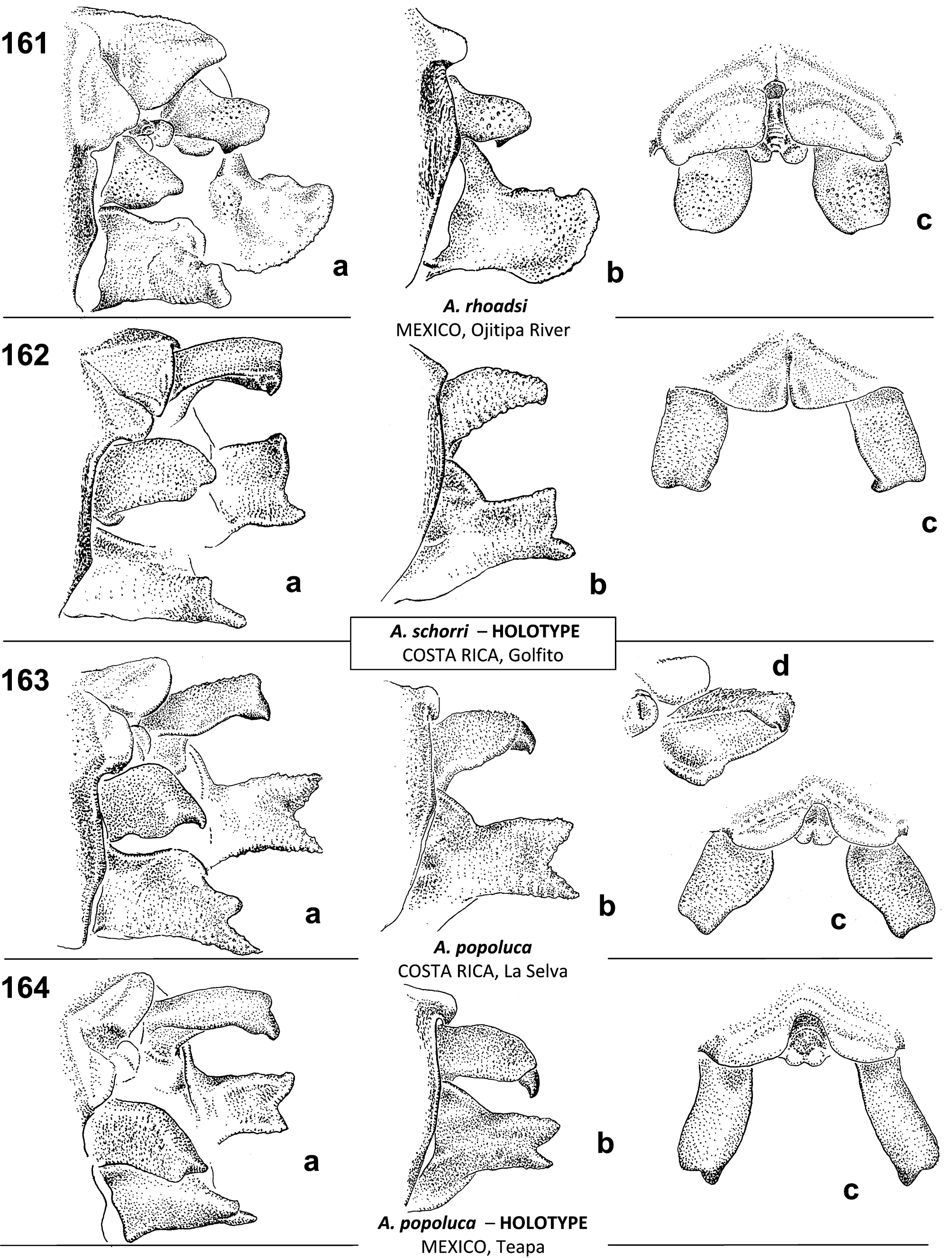 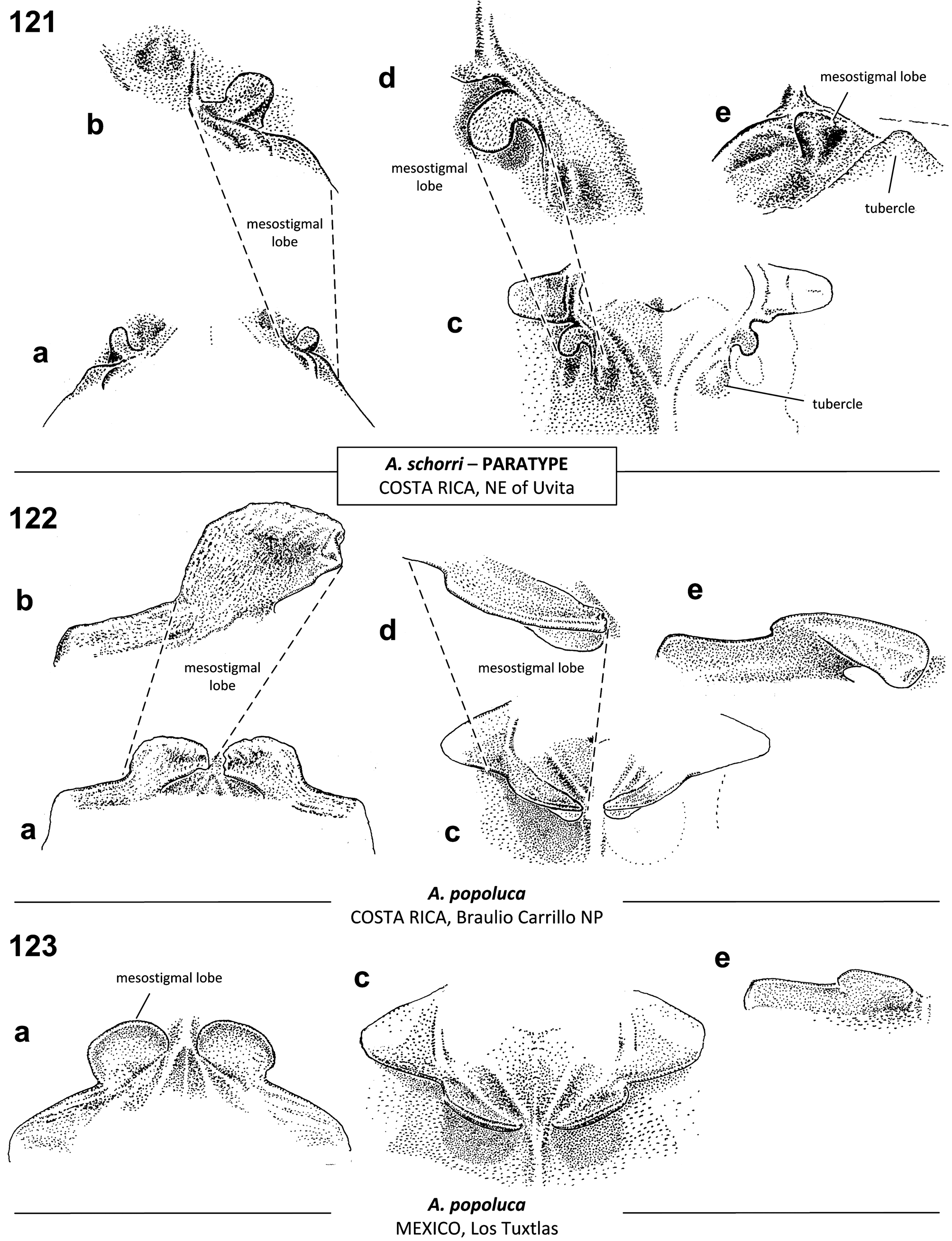