Diagnosis. A species of Epinephelus  with dorsal-fin rays XI, 14; anal-fin rays III, 8; pectoral-fin rays 17; caudal-fin rounded; lateral-line scales 60–67; lateral-scale series 101–116; gill rakers 9–10 + 16–19 = 25–28; midlateral part of lower jaw with 2 rows of teeth; vomer v-shaped, each arm with 2–3 rows of villiform teeth; palatines narrow, with 2–4 rows of villiform teeth; angle of preopercle broadly rounded, with 4–9 small non-prominent serrae; body depth 3.0– 3.4 in SL; fourth dorsal-fin spine longest, 3.3–4.0 in HL; and colouration including broad dark brown margins to the soft dorsal, anal and caudal fins, no dark spots on the head, body, or fins at any known size, and in subadults two faint pale brown bars radiating from the eye to the edge of the opercle, and diffuse irregular brown wavy bars and blotches on the sides of the body.

Mouth large, oblique, forming an angle of about 40° to the horizontal, lower jaw protruding beyond tip of upper jaw; upper jaw extending to vertical from just beyond posterior margin of pupil (just beyond posterior margin of pupil to just beyond posterior margin of eye), upper-jaw length 2.2 (2.2–2.4) in HL; posterior edge of maxilla straight (straight to slightly rounded), with narrowly rounded corners, maxilla width 8.4 (7.4–8.1) in HL. Pair of moderate canine teeth anteriorly in each jaw, those in upper jaw with gap 2.1 (1.5–2.0) times wider than gap in those in lower jaw. Teeth in lower jaw anteriorly in small patch 3–4 (3–5) teeth wide on either side of symphysis behind pair of more enlarged canines, followed posteriorly on each side by 2 rows of subequal teeth extending to rear of jaw; upper jaw with larger anterior tooth patch in 3–4 (3–5) rows, followed posteriorly by single row of enlarged teeth distally and about 3 rows of much smaller teeth mesially. Vomer v-shaped, with 2 (2–3) rows of villiform teeth; palatines narrow, with 3 (2–4) rows of villiform teeth. Tongue large, with broadly rounded tip. Longest gill raker at angle, slightly shorter than (subequal to shorter than) longest gill filament. Nostrils round, posterior nostril largest, 1.6 (1.4–1.6) times width of anterior nostril. Anterior nostril with membranous flap, apex of flap over posterior portion of rim.

Origin of dorsal fin above vertical from axil of pectoral fin (axil of pectoral fin to midway between axil of pectoral fin and upper corner of opercle); predorsal length 2.7 (2.6–2.8) in SL; membranes of spinous dorsal fin deeply incised; dorsal-fin spines progressively longer to fourth spine, then gradually decreasing in length to penultimate; first spine about half length of second, 8.4 (7.9–9.9) in HL; fourth spine longest, 3.7 (3.3–4.0) in HL; last dorsal-fin spine longer than penultimate, 5.5 (4.8–5.3) in HL; fifth (fifth to seventh) soft dorsal-fin ray longest, 3.1 (3.0–3.2) in HL. All dorsal and anal-fin rays branched, the last to base.

Etymology. Derived from the Latin fusco for brown and marginatus for margin, in reference to the broad dark brown margins to the unpaired fins.

Distribution and abundance. The type specimens were collected by dropline from the Capricorn Channel, south of the Swain Reefs group, Qld (22°52.8’S 152°40.8’E), at depths of 220– 230 m. Epinephelus fuscomarginatus  appears to have a scattered distribution within the area south of the Swain Reefs and east of the Capricorn- Bunker group. Professional fishers have reported that it can reliably be caught at a number of sites in this area, but is nowhere common. Our examination of catches of groupers from commercial deep dropline fishing off the east coast of Queensland over the past 30 years have not resulted in any additional photographs, reports, or specimens of this species outside of this area and there are no other confirmed records of the species in Australia, or elsewhere in the Indo-west Pacific.

Discussion. In the process of comparing specimens of E. epistictus  to the new species, differences in colouration were noted between populations of E. epistictus  from the Sea of Japan and East China Sea, versus those from the Indian Ocean east to the Indo-Australian Archipelago. As previously reported by Randall & Heemstra (1991), Heemstra & Randall (1993) and Craig et al. (2011), specimens from the northwestern Pacific usually have more numerous small dark spots on the soft dorsal and caudal fins and on the head (e.g. fig. 4B ( Japan), fig. 5A (Taiwan); Lee, 1990: fig. 51 (Taiwan); Masuda et al., 1984: pl. 117A ( Japan)), than do other populations from other regions, which often have no, or only a few spots that are mostly confined to the dorsal-fin base (e.g. fig. 4C (Arafura Sea, Australia); Randall & Heemstra, 1991: pl. 11D ( Cochin, India); Randall, 1995: pl. 297 ( Bahrain, Persian Gulf); White et al., 2013: fig. 51.28 ( Indonesia)). Higher lateral-line scale counts were also recorded for northwestern Pacific specimens (63–70 ( Randall & Heemstra, 1991) and 68–71 ( Katayama, 1960), versus 55–66 ( Randall & Heemstra, 1991) from elsewhere, which accords with the counts presented here ( Table 3). These morphological differences were supported by the molecular results, which indicated a genetic divergence of 3.70% ( Table 2) between samples available for the two populations and that each population formed a distinct, strongly supported clade (fig. 1). Consequently, the two populations are treated separately here, with those from the Indian Ocean referred to herein as E. cf epistictus  . Epinephelus praeopercularis  may be an available name for the Indian Ocean form, should populations from the western Indian Ocean prove to be consistent with others from throughout the broader Indian Ocean region. However, genetic samples and specimens from near the type locality (Gulf of Oman), or from elsewhere in the western Indian Ocean were unavailable, so resolution of this complex was outside of the scope of this study.

There are only minor differences in counts and proportional measurements between E. fuscomarginatus  and its closest congeners. All five type specimens have 14 soft dorsal-fin rays and 17 pectoral fin rays, whereas P. epistictus  , E. cf epistictus  and E. magniscuttis  have 14–15 (usually 15) soft dorsal-fin rays and 17–19 (usually 18) pectoral fin rays ( Table 2; Katayama (1960); Lee (1990); Randall & Heemstra (1991)). Lateral-line scale counts in E. fuscomarginatus  are similar to E. epistictus  and E. cf epistictus  , but are somewhat higher than in E. magniscuttis  (60–67, versus 55–62 ( Table 2; Randall & Heemstra, 1991). The range of total and lower arch gill-rakers for E. fuscomarginatus  is slightly higher among our material examined than in the other three species ( Table 2). However, values for lower rakers presented by Randall & Heemstra (1991) for E. epistictus  (15–18) and E. magniscuttis  (16–17) are slightly higher, hence we regard the apparent variation as unreliable given the relatively low number of specimens examined. It should also be noted that in large specimens of all the above species the lowermost rakers are typically reduced to rudiments or flattened platelets that are often closely associated with their neighbour. Accurate counts are thereby difficult and minor variations in lower gill raker counts should be treated with caution, especially when obtained from different observers. In specimens greater than 400 mm SL E. fuscomarginatus  has a shallower body depth than E. magniscuttis  (depth in SL 3.0–3.4, versus 2.8–3.0, Tables 3, 4).

Randall & Heemstra (1991) provided ratios for longest dorsal-fin spine in HL and pelvic fin in HL in E. magniscuttis  as 2.45–3.0 and 2.1–2.35, respectively. This data has also been quoted by several subsequent authors (e.g. Heemstra & Randall, 1993; Craig et al., 2011). It suggests significant differences between E. magniscuttis  and E. fuscomarginatus  , with longest dorsal-fin spine in HL 3.3–4.0 and pelvic fin in HL 2.4–2.6 applying in the latter. However, Randall & Heemstra’s data for E. magniscuttis  is at odds with that presented here (3.3–3.5 and 2.4–2.8, respectively, Table 4), where no significant difference in these ratios is indicated between similar-sized individuals of the two species. Differences between our data for E. magniscuttis  and that of Randall & Heemstra (1991) may be most readily explained by their significantly smaller range of specimens examined (132–418 mm SL, versus 419– 613 mm SL in this study). Minor variations in several proportional measurements between E. fuscomarginatus  , E. epistictus  and E. cf epistictus  ( Table 3–4) are not regarded as reliable diagnostically, due to wide variation in lengths of specimens examined between the species. Specimens of E. epistictus  and E. cf epistictus  400–600 mm SL would be required for examination to determine if there are significant differences in proportional measurements between the species, but specimens of this size are generally rare or absent in international ichthyological collections.

Among other species of Epinephelus  with a relatively uniform body colouration and few distinctive markings, E. fuscomarginatus  differs from E. heniochus  (fig. 5B) by higher lateral-line scale and gill raker counts (60–67 and 9–10 + 16–19 = 25–28, versus 54–62 and 7–9 + 14–16 = 21–25, respectively), a much larger maximum size (at least 564 mm SL, versus 350 mm SL), the lack of any small dark spots on the head and body at any known size (small yellowish brown dots sometimes present on the head and body, but often absent in large specimens and those from northwestern Australia, in E. heniochus  ) and spinous dorsal-fin membrane dark brown adjacent to distal tip of spine and semitransparent posteriorly, versus distal part of membrane pale yellowish in E. heniochus  . Another grouper lacking distinctive markings, Hyporthodus perplexus  , known only from a single 465 mm SL specimen ( Randall et al., 1993), has fewer soft dorsal-fin rays and lateral-line scales (13 and 52, versus 14 and 60–67, respectively), a greater number pectoral-fin rays (18, versus 17), a deeper body (depth 2.9 in HL, versus 3.0–3.4) and a proportionately wider posterior nostril (about twice diameter of anterior nostril, versus 1.3–1.7). Despite a large amount of fishing effort over many years around the region of the type locality of H. perplexus  (northeast of Cape Moreton, Qld, Australia, in 128–137 m), no specimens or photographs of it or E. fuscomarginatus  have been reported by the numerous commercial and recreational fishers that frequent this area, or the intervening area north to off the Capricorn-Bunker Group where is latter is known. Other deep water species, E. morrhua  , E. poecilonotus  and E. radiatus  , share similar fin ray, gill raker, lateral-line scale and lateral tooth row counts, but are readily distinguished by the distinctive markings on the sides of their bodies. They also have fewer, more enlarged serrae on the angle of the preopercle (2–5 distinctly enlarged spines, versus 4–9 non-prominent serrae in E. fuscomarginatus  ) and generally have longer heads (HL 2.15–2.5 in SL, versus 2.4–2.5 in E. fuscomarginatus  ) and deeper bodies (depth 2.55–3.1 in SL, versus 3.0– 3.4 in E. fuscomarginatus  ).

During examination of available specimens and photographs of E. magniscuttis  , considerable intraspecific variation was noted in the size and number of spots between similar-sized individuals from differing localities. Spots in specimens from Western Australia (WAM P.26610-001, 558 mm SL, WAM P.34888-001, 577 mm SL (fig. 6A) and images of four fish 60–70 cm TL (e.g. fig. 6B) supplied by C. Buckingham from off Exmouth, WA, in 250 m), although distributed in roughly similar areas of the body and fins, were much smaller and more sparse, especially on the head, soft dorsal and caudal fins, than in a specimen from Japan, KAUM I. 73560, 613 mm SL ( Nakamura et al., 2018, fig. 1). The Western Australian specimen that was genetically sampled (WAM P.34888-001) differed only by a single base pair to the Japanese specimen across the DNA barcoding fragment. As noted, the level of sequence divergence difference between E. fuscomarginatus  and E. magniscuttis  is low (1.10%). The number of available E. magniscuttis  sequences is very small (n = 3), including one specimen from Taiwan ( KU893048View Materials) taken from GenBank identified as E. epistictus  , but with only another single base pair difference from other E. magniscuttis  sequences ( Table 1, fig. 1). Further sequences from E. magniscuttis  may provide greater genetic resolution between the two species. Iswarya Deepti et al. (2018) include three specimens identified as E. magniscuttis  in their genetic (COI) identification of Indian grouper species, however, these sequences were not publically available (either through GenBank or BOLD), so could not be incorporated in this study. Other reports of E. magniscuttis  from India (e.g. Sujatha et al., 2008; Sujatha et al., 2015) illustrate specimens that are doubtfully distinct from E. cf epistictus  and other authors (e.g. Basheer et al., 2017) have indicated that they are likely misidentifications of E. epistictus  . 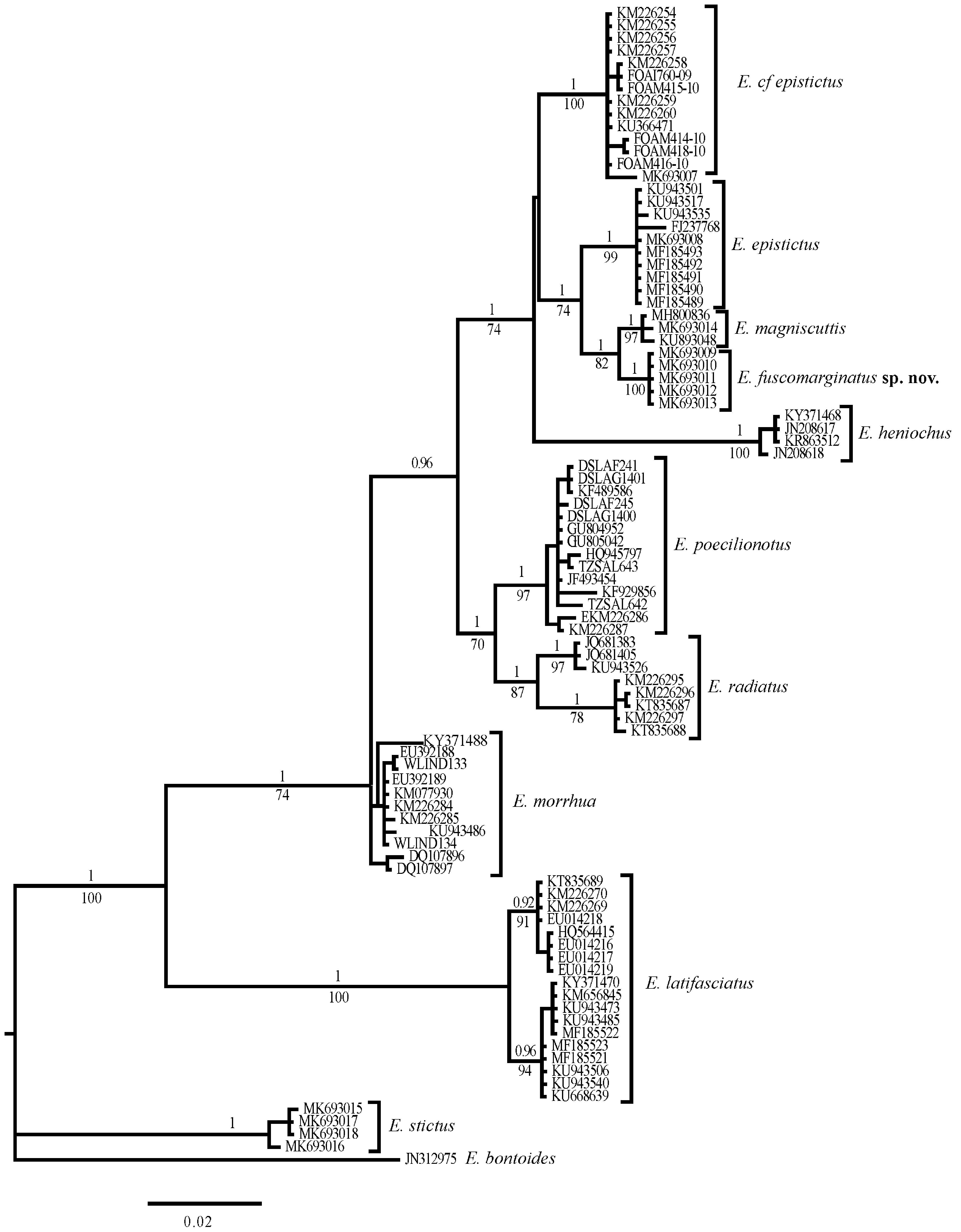 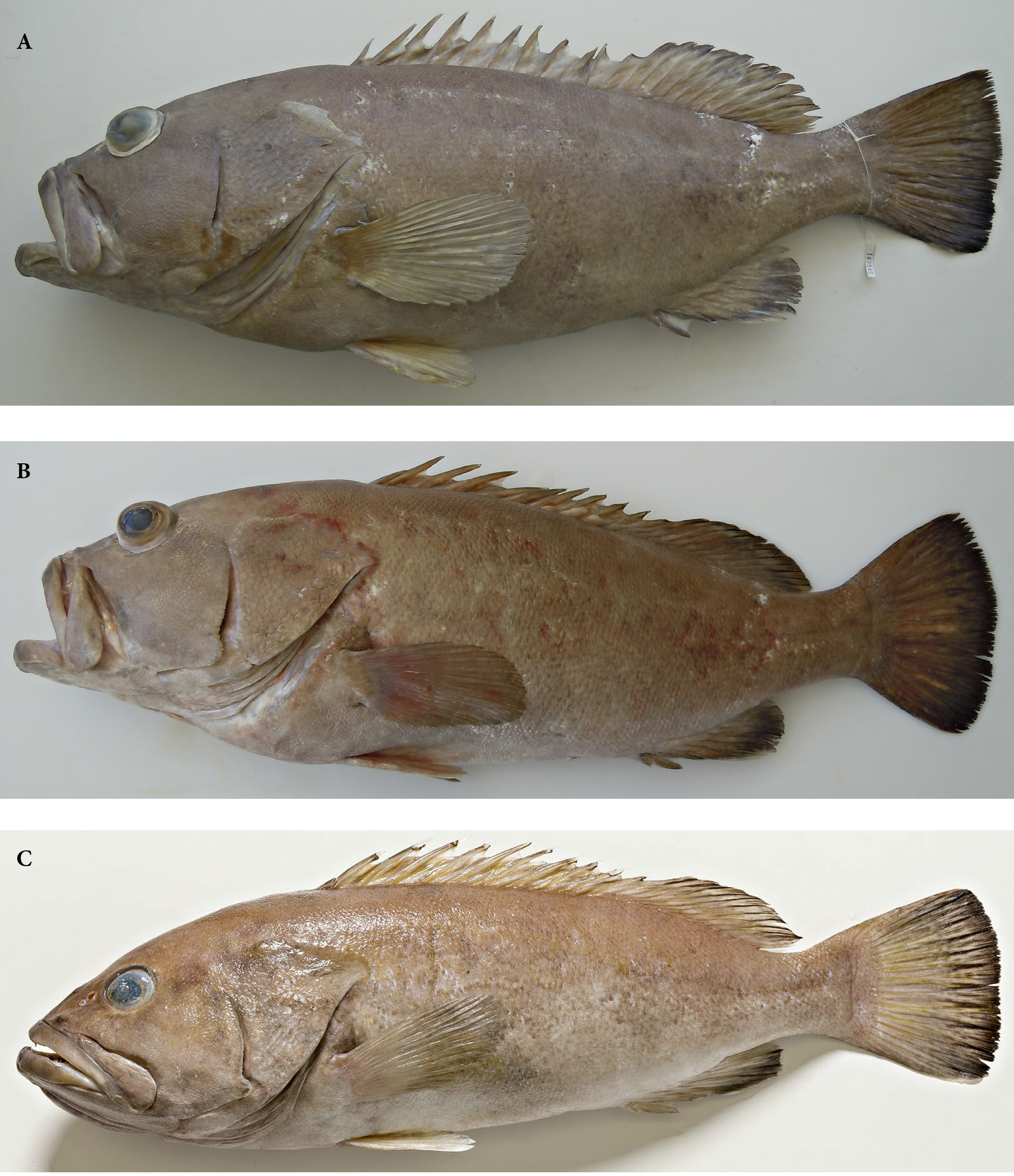 TABLE 2. Estimates of mean sequence divergence within (on diagonal) and between (below diagonal) species.

TABLE 1. Details of all sequences analysed in this study, including Genbank/BOLD accession numbers.