Leaf mine. Unknown; erroneously reported to be on the upper leaf surface (see Review).

Review. This species was described from Massachusetts. Braun (1908) stated that according to Frey & Boll (1873), its mine is on the upper surface of Robinia pseudoacacia  leaves. We are unable to find this assertion in their paper. After discussing specimens they thought to be Chrysaster ostensackenella  and then describing Lithocolletis gemmea  as a possible synonym of Parectopa robiniella Clemens  ( Gracillariidae  ), Frey & Boll (1873) discussed what are clearly the mines of Macrosaccus robiniella (Clemens)  , Parectopa robiniella  , and C. ostensackenella  . They were unsure which moths went with which mines, and they concluded with the statement that careful observations would bring clarity to this confusing topic. Chambers (1874a, 1874b, 1875a) discussed Frey & Boll’s paper at length, and concluded that P. gemmea  had been associated with Robinia  in error. As Chambers (1874b, 1875a) put it, Frey was working from a “confused jumble of leaves,” apparently resulting from Boll’s having to leave the USA in a hurry, and “it frequently happened, that the Professor was unable to tell which of three or four kinds of leaves his species came from.” Nearly 150 years later, the only further record of this species is that of Brower (1984), who cited several adults caught in Maine. Given the number of questionable identifications in the Gracillariidae  section of that publication, this record requires confirmation.

Comments. Frey & Boll (1873) indicated that they had three females and one male of P. gemmea  when they described the species. In a note immediately following the species description, they described a somewhat different male, expressing some doubt about whether it represented the same species; this was apparently not the same male they mentioned at the outset but this is not entirely clear from their remarks. This male is said to be somewhat smaller, considerably lighter, and strikingly broad-winged; the forewing markings are finer and do not shine as much; there is a short, narrow, distinctly margined basal streak (as opposed to the “accumulation of shiny golden scales in the fold” described for P. gemmea  ); and the apical spot is small, lacking the golden scales that are present in the “handsome black spot” of P. gemmea  .

Braun’s (1908) description of P. gemmea  mentions a basal streak that ends at one-third the wing length, dark margined above and indistinctly so beneath; she also refers to a “small broad white spot” on the dorsal margin, just before the apex of the basal streak. The latter marking is not mentioned in either of Frey & Boll’s (1873) descriptions. Of the two syntypes at the CMCZ, the dorsal spot is present in just one ( Fig. 33View FIGURES 33–34), which is also consistent with Braun’s description in having the apical portion of the wing “densely dusted with brown scales, forming a large apical spot,” and in having the fascia just before the middle of the wing. The other CMCZ syntype (which is the only syntype with an abdomen; Fig. 34View FIGURES 33–34) has a much smaller apical spot, but it also has a shorter and indistinctly margined basal streak, so neither specimen seems to be the aberrant male described by Frey & Boll, although the latter specimen is the better candidate. It appears that this second specimen was not examined by Braun (1908), because it possesses three posterior costal streaks, such that her key identifies it as P. martiella (Braun)  .

At the Natural History Museum, London, UK (BMNH), there are three specimens of P. gemmea  , all from Walsingham’s collection, of which just one is labeled as a syntype. One of the other two, annotated “Zeller coll.”, is smaller and paler and may represent the aberrant male described by Frey & Boll. The fifth specimen is annotated “Frey coll.” and may represent the intended fourth specimen in the type series; it is the only P. gemmea  specimen at the BMNH with an abdomen.

Besides P. martiella  , a leafminer of Betula  L. ( Betulaceae  ) described from a specimen reared in British Columbia, at least two other Phyllonorycter  species have a wing pattern similar to that of P. gemmea  ; all three form underside  tentiform mines and have been reared in Massachusetts by CSE. Braun (1916) described P. diversella (Braun)  from two Ohio specimens, one reared from Gaylussacia baccata (Wangenh.) K.Koch  and one from Oxydendrum arboreum  (L.) DC. ( Ericaceae  ). She made no comparisons to other species other than stating that the coloring is identical with that of Chrysaster ostensackenella  . Braun (1923) described P. viburnella (Braun)  from a female reared from Viburnum dentatum  L. ( Adoxaceae  ) in Ohio; she stated that this species is nearest to P. martiella  but did not specify how it differs from this or any other species.

It seems quite possible that P. gemmea  could be synonymous with P. diversella  , P. martiella  , or P. viburnella  . Considering their hostplants, only Gaylussacia  has leaves that could have been mistaken for leaflets of Robinia  after collecting— Oxydendrum  does not occur in Massachusetts, and Betula  and Viburnum  have serrated leaves with pronounced lateral ribs. If we can assume that the leaves were correctly associated with the moths (albeit mixed together with Robinia  leaflets mined by other gracillariids), this suggests that P. diversella  may be conspecific with P. gemmea  . However, we are unable to make a decision about this until types of both species have been dissected and compared. 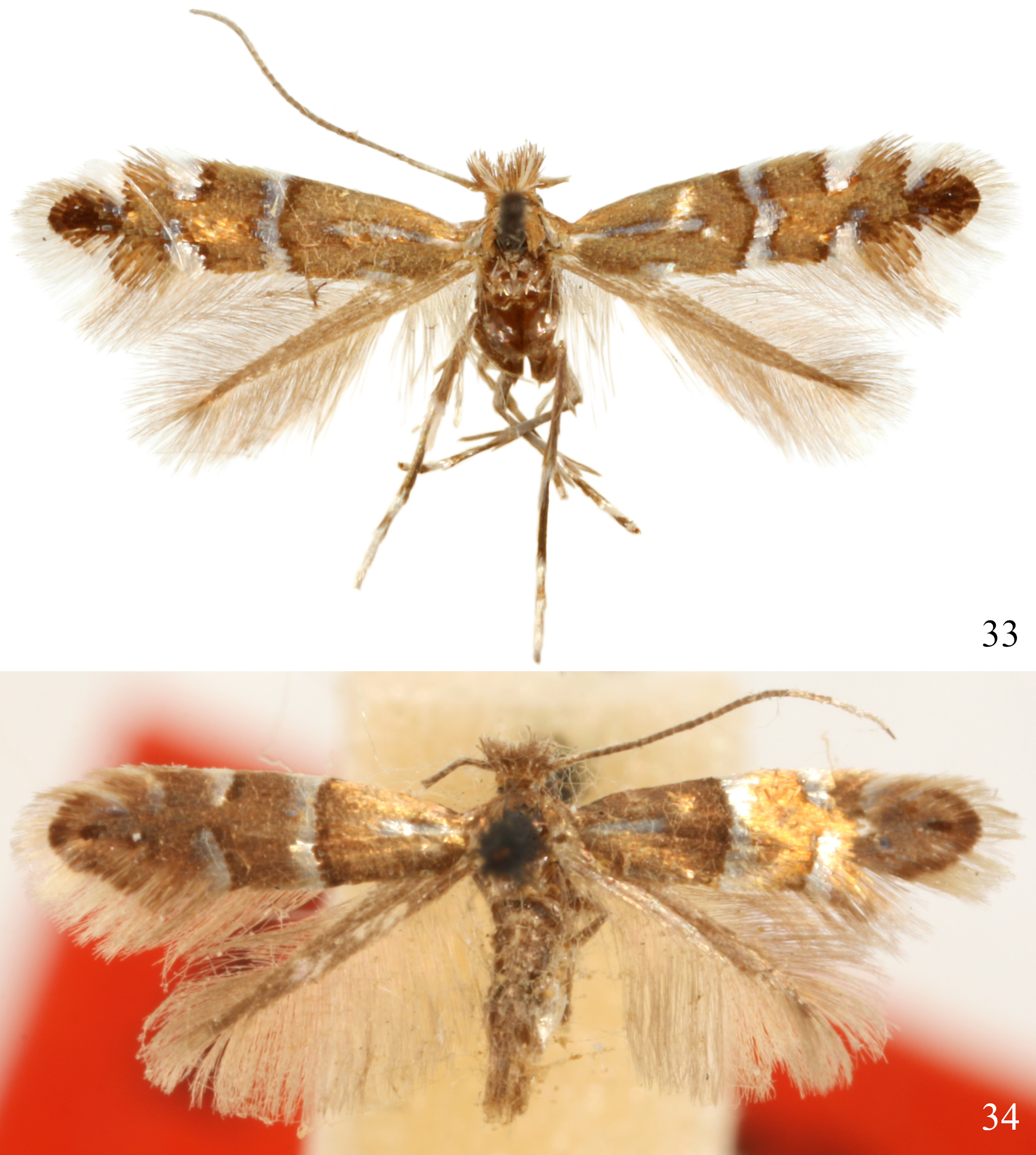 FIGURES 33–34. Syntypes of Phyllonorycter gemmea (CMCZ). 33: The specimen on which Braun (1908) evidently based her description; 34: Specimen with three posterior costal streaks rather than two.

FIGURES 33–34. Syntypes of Phyllonorycter gemmea (CMCZ). 33: The specimen on which Braun (1908) evidently based her description; 34: Specimen with three posterior costal streaks rather than two.