Review. Walsingham (1889) reared the type series from “somewhat folded mines, occupying the whole upper side of leaves of Ledum glandulosum  ” (= Rhododendron columbianum  ) collected in Mendocino Co., California. This species has since been recorded from Quebec and Greenland, where it has been reared from Rhododendron groenlandicum  ( Handfield 1997; Karsholt et al. 2015; De Prins & De Prins 2019), as well as from British Columbia ( Pohl et al. 2015), Yukon, Alberta, and Ontario ( Pohl et al. 2018). An aborted mine on R. groenlandicum  apparently representing Phyllonorycter ledella  was photographed in Saskatchewan ( Dombroskie 2017), and Adam (2019) reared adults from this host in New Brunswick (Fredericton, York Co.). Karsholt et al. (2015) stated that the distribution of P. ledella  includes “north-eastern and western USA,” but apart from Michigan specimens listed in Appendix 1 of Landry et al. (2013), there are no specific literature records from states other than California. CSE has found old mines on R. groenlandicum  in Maine (Steuben, Washington Co.; Figs. 40–41View FIGURES 40–42).

Comments. In Greenland it has been suggested that Phyllonorycter ledella  may have a two-year life cycle, with larvae hibernating in non-deciduous leaves ( Karsholt et al. 2015). Adults have been found in Greenland from late July to early August. The available records from Canada and the US similarly only account for one generation: Dombroskie (2011) photographed what appears to be a mine containing a feeding larva of P. ledella  in Ontario on 8 May; the Quebec specimen shown by De Prins & De Prins (2019) was reared from a larva or pupa collected on 10 May (the adult emerged on 29 May according to J.-F. Landry, in litt.); the New Brunswick specimens emerged from 15 to 18 June from mines collected on 22 May ( Adam 2019); and the type series emerged in June from mines collected in the same month ( Walsingham 1889). 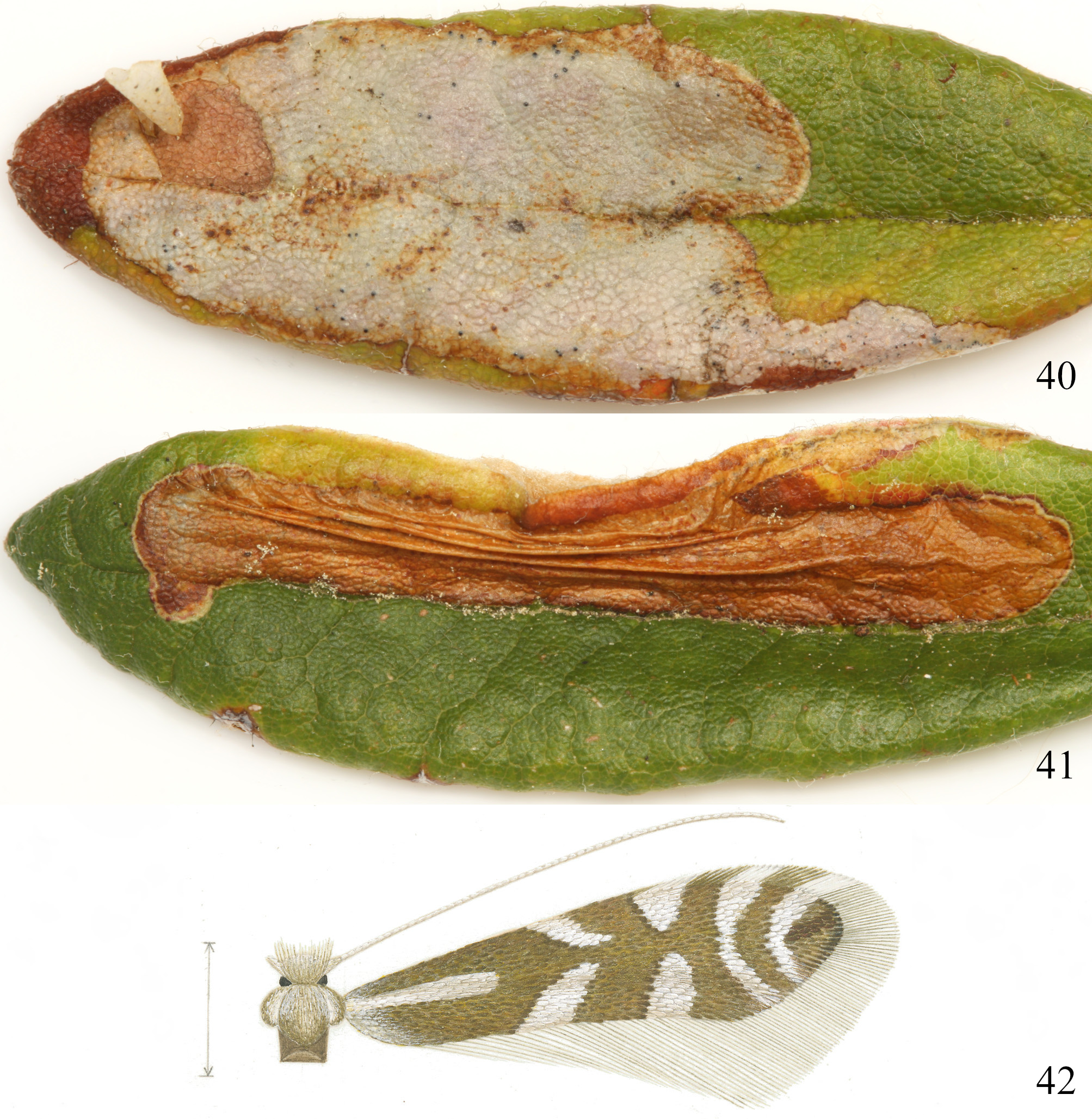