Currently, the Reptile Database lists 206 species of Cyrtodactylus ( Uetz & Hošek 2015) . Systematists face considerable challenges when trying to identify derived morphological characters in this diverse gekkonid radiation. On the basis of morphology, Grismer et al. (2010) proposed a phylogeny of Cyrtodactylus with spinose prehensile tails. These authors constructed their tree using parsimony and polarized a small matrix of characters by treating all other congeners as outgroups. In their phylogeny, Cyrtodactylus brevipalmatus and C. elok form a clade and share digital webbing, a square tail, and a caudal fringe. Cyrtodactylus spinosus , C. stresemanni , and C. durio form a second clade and share spinose tubercles in the ventrolateral fold on the body. Within the second clade, Cyrtodactylus durio and C. stresemanni are sister species and share enlarged, ventrolateral caudal tubercles. The authors argued that a prehensile tail is a synapomorphy of these five species.

Using their methods ( Table 1 View TABLE 1 ), we add Cyrtodactylus lateralis (Werner) , C. interdigitalis Ulber , C. nuaulu Oliver et al. , and C. serratus Kraus to this morphological phylogeny ( Fig. 6 View FIGURE 6 ). Ulber (1993) compared C. interdigitalis to C. brevipalmatus and C. elok and noted that, unlike these two species, C. interdigitalis has a round rather than square tail. All three species share digital webbing and a ventrolateral fringe. The ventrolateral fringe consists of a distinctive row of enlarged conical tubercles separated by smaller lanceolate tubercles. The enlarged tubercles are the ventrolateral components of caudal whorls, whereas the smaller conical tubercles are the only enlarged scales separating the whorls dorsally. All three species lack spinose tubercles in the ventrolateral fold on the body. Ulber (1993) did not mention whether C. interdigitalis coils its tail at rest, however we have seen photos of specimens from Laos exhibiting this behavior. Based on this combination of traits, we add C. interdigitalis to the morphological phylogeny of Grismer et al. (2010) and place C. interdigitalis as the sister species to a clade containing C. elok and C. brevipalmatus ( Fig. 6 View FIGURE 6 ). We refer to this group of three species as the “mainland SE Asian clade” of prehensile-tailed Cyrtodactylus , because these species occur in Laos, Myanmar, Peninsular Malaysia, and Thailand.

In their phylogeny, Grismer et al. (2010) placed Cyrtodactylus durio as the sister species to C. stresemanni with C. spinosus sister to the C. durio + C. stresemanni clade. They note that C. spinosus lacks ventrolateral caudal tubercles, but did not explain how they scored this character. We count tubercles in the middle of the tail: C. lateralis , C. durio , and C. stresemanni have six spinose tubercles per caudal whorl throughout most of the tail (the count will be higher close to the body and lower distally), whereas C. spinosus has only 4 (also noted by Linkem et al. 2008). We add C. lateralis to the C. durio + C. stresemanni Clade, because C. durio and C. lateralis are identical for the characters used to construct the morphological phylogeny ( Table 1 View TABLE 1 ). Cyrtodactylus nuaulu and C. serratus , both from east of Wallace’s Line, have conical tubercles in the ventrolateral fold, ventrolateral caudal tubercles, and tails with whorls of six spinose tubercles extending for most of the length of the tail. On the basis of morphology, we infer that the tails of these two species are prehensile, even though neither description mentions whether the species coils its tail in a manner similar to C. spinosus and the Sunda Shelf species. The unique holotype of C. serratus was collected in the Star Mountains of New Guinea in 1987 and Kraus (2007) provided no information about its behavior or natural history. All adults of the type series of C. nuaulu were collected on trees and vines, 50–200 cm aboveground on Seram ( Oliver et al. 2009). Based on these observations, we add C. nuaulu and C. serratus to the clade containing C. stresemanni , C. durio , and C. lateralis . We refer to this clade as the “insular clade” of prehensile-tailed geckos, because most of the species occur on islands. Of the five species of the insular clade, only C. durio occurs on the mainland.

We have shown that some distinctive characters originally suggesting a close relationship between Cyrtodactylus durio and C. stresemanni are also found in C. serratus and C. nuaulu . Although the specimen has faded with age, the dorsal pattern of the holotype of C. stresemanni remains well-defined ( Rösler & Glaw 2008, their figure 7). The specimen has two pairs of elongate blotches on the flanks separated by a wide, pale vertebral stripe. This dorsal pattern is unlike that of any other Sunda Shelf Cyrtodactylus , however it resembles patterns in the type series of C. nuaulu (compare especially to MZB 2325 in Oliver et al. 2009, their figure 2), C. spinosus (see especially MZB 7029 with “less complete” chevrons, Linkem et al. 2008: 228), and C. serratus ( Kraus 2007, his figure 1 A). All four species share a wide pale vertebral stripe and few (2–3 between limbs) large, dark-brown chevron-shaped blotches. The vertebral stripe may be interrupted by the chevrons medially or divide the chevrons as it does in the holotypes of C. serratus and C. stresemanni and some paratypes of C. spinosus ( MZB 7029) and C. nuaulu ( MZB 2329). Although the dark triangular blotch on the nape of C. stresemanni might at first appear to ally it with C. elok and C. brevipalmatus , C. nuaulu , C. serratus , and C. spinosus have triangular blotches on their napes as well. Cyrtodactylus durio and C. lateralis unequivocally lack the distinctive color pattern of C. stresemanni and the three other species. Like C. brevipalmatus , C. elok , and C. interdigitalis , C. durio and C. lateralis are banded species lacking a pale vertebral stripe.

To determine polarity of the distinctive color pattern of the Wallacean and Papuan species, we reviewed recent descriptions and revisions of Cyrtodactylus from across the distribution of the genus. We were unable to find other species with a pale vertebral stripe and 2–3 dark brown chevrons. C. zugi Oliver has two large brown chevrons, but lacks a vertebral stripe. The pattern of the Wallacean and Papuan prehensile-tailed Cyrtodactylus is most likely derived, however, its distribution is not congruent with the morphological phylogeny regardless of polarity. If derived, the pattern is a synapomorphy of the insular clade, with a reversal to the banded pattern in C. durio and C. lateralis . If the pattern is primitive, a banded pattern would have to evolve twice: once leading to the mainland SE Asia clade and once leading to a clade containing C. durio and C. lateralis .

Prior to this study, molecular data were available for only two of the eight species of prehensile-tailed Cyrtodactylus . Wood et al. (2012) confirmed the suspicions of Ulber (1993) that C. elok is closely related to C. interdigitalis , and these two species are sister taxa in Clade F of their phylogeny. We obtained ND 2 and COI sequences for four of our new specimens of C. lateralis and an ND 2 sequence of the holotype of C. durio . Our maximum likelihood and Bayesian analyses recovered similar topologies with minor differences in support for each gene.

Relatively few sequences of the COI gene were available on GenBank (Appendix 1), however we were able to place Cyrtodactylus elok and C. lateralis within a phylogeny containing 34 additional congeners and Gekko gekko as an outgroup. Our Maximum Likelihood tree contained few mainland species and had low support for most nodes. Nonetheless, we found no evidence of a close relationship between C. elok and C. lateralis using the COI sequences. In this small matrix of species, C. elok and C. lateralis were placed near the base of the phylogeny and had uncorrected genetic distances greater than 19 % to other species in the phylogeny ( Table 2 View TABLE 2 ).

Our ND 2 matrix included Cyrtodactylus durio , C. elok , C. interdigitalis , C. lateralis , 83 additional congeners, 26 gecko species as near outgroups, and Anolis carolinensis as a distant outgroup. We only discuss the region of the tree containing prehensile-tailed Cyrtodactylus and have collapsed several clades in figure 6 to make the phylogeny easier to read. The base of the tree, including C. angularis , C. tibetanus , outgroups, and a clade of the Myanmar species, is not shown. Overall, our ND 2 phylogenies had high bootstrap support and posterior probabilities; it showed substantial congruence with the phylogeny of Wood et al. (2012).

As for the COI gene, we found no evidence of a close relationship between Cyrtodactylus lateralis and C. elok using the ND 2 gene ( Fig. 6 View FIGURE 6 ). We found that C. elok and C. interdigitalis are closely related and belong to a clade containing the C. pulchellus Group, a large radiation of 18 Australo-Papuan species, and the mainland species C. oldhami , C. tygroides , C. hontreensis , C. intermedius , and C. peguensis . This result agrees with that of Wood et al. (2012), although they found the C. pulchellus Group to be sister to the C. elok + C. interdigitalis clade, whereas we found the mainland species to be sister to this pair. Nonetheless, C. elok and C. interdigitalis have relatively long branch lengths and an uncorrected genetic distance of 22.9 % from one another ( Table 2 View TABLE 2 ).

In contrast, Cyrtodactylus lateralis belongs to a large clade of mostly Sunda Shelf and Philippine species. Cyrtodactylus lateralis is sister to C. durio and their ND 2 sequences have diverged by 11.7 %. These two species have yet to show any clear affinitiess to three clades in the crown clade of figure 6, and we show all four lineages as an unresolved polytomy. The distant relationship of C. lateralis to the C. elok + C. interdigitalis clade is also reflected in high uncorrected genetic distances between C. lateralis and C. elok (27.6 %) and C. lateralis and C. interdigitalis (26.7 %). 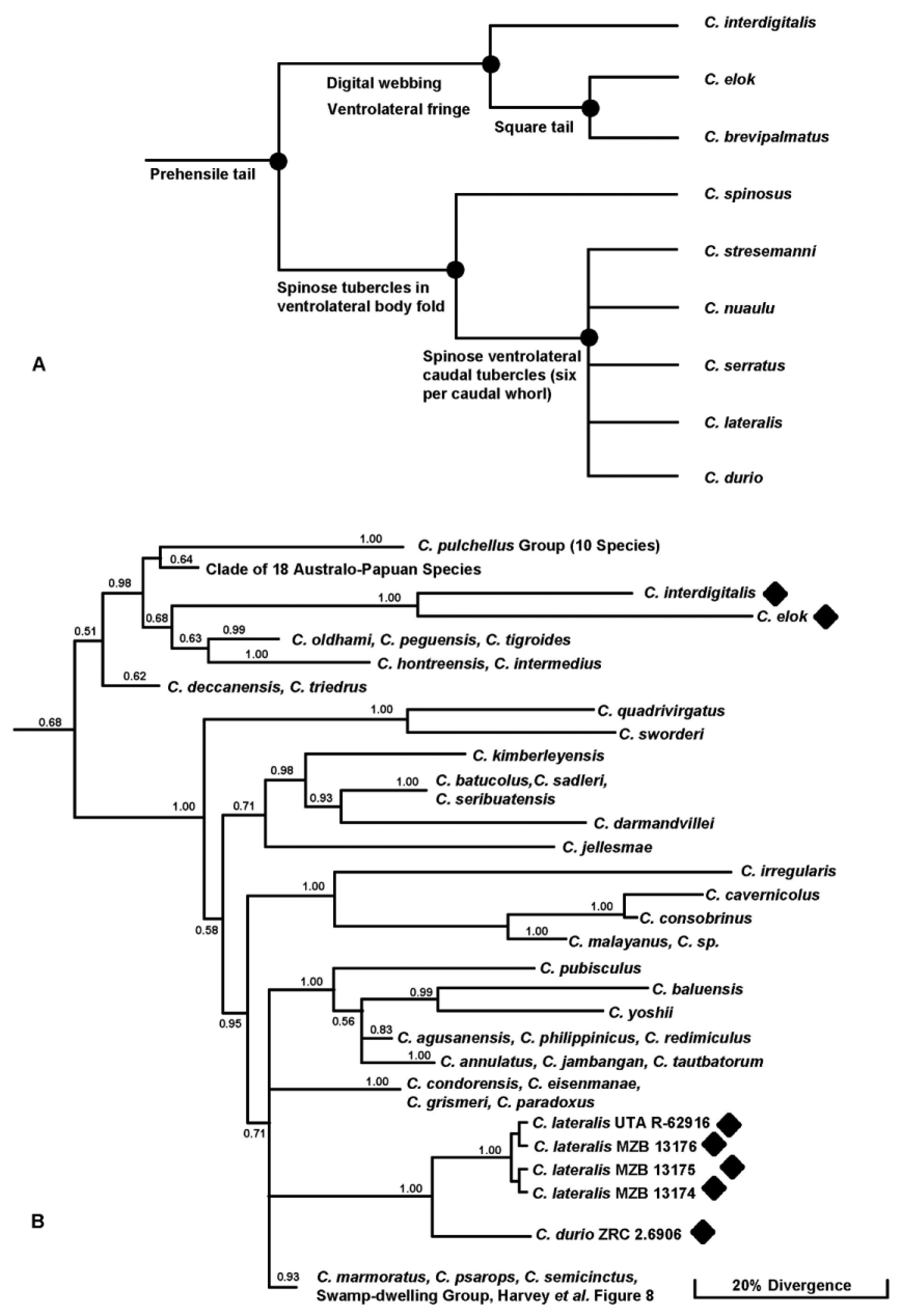 FIGURE 6. Phylogenetic relationships of Cyrtodactylus with spinose, prehensile tails. (A) Phylogeny based on morphology with three species added to original hypothesis of Grismer et al. (2010). (B) Clade pruned from our larger phylogeny based on sequences of the NADH Dehydrogenase 2 gene (ND 2). Tree constructed using Bayesian inference. Nodal values are posterior probabilities, and diamonds indicate prehensile-tailed Cyrtodactylus.

FIGURE 6. Phylogenetic relationships of Cyrtodactylus with spinose, prehensile tails. (A) Phylogeny based on morphology with three species added to original hypothesis of Grismer et al. (2010). (B) Clade pruned from our larger phylogeny based on sequences of the NADH Dehydrogenase 2 gene (ND 2). Tree constructed using Bayesian inference. Nodal values are posterior probabilities, and diamonds indicate prehensile-tailed Cyrtodactylus.