Tail cylindrical, though somewhat flattened dorsally and ventrally, with distinct lateral sulcus proximally for about two-thirds its length; caudal tubercles 2–3 times as large as those on body, heavily keeled, and projecting, separated from one another by granular scales; caudal tubercles on about 90 % of intact tails, disposed in six longitudinal rows and in regular whorls, one tubercle of each whorl below lateral sulcus on each side; 2–3 tubercles in irregular transverse row between successive whorls on proximal one-third to one-half of tail; tubercles between whorls same shape but only one-half to one-third as large as tubercles forming whorls; size and distribution of tubercles at base of tail like posterior body; subcaudals smooth, flat, homogenous, imbricate, 2–3 times as large as granules on sides of tail; each subcaudal about as long as wide; transversely enlarged subcaudal plates absent; cloacal tubercles rounded, smooth, one (7 %, n = 27) or two (93 %) on each side, contacting one another (80 %, n = 25 paired tubercles) or separated from one another by a single granular scale (20 %) [2 / 2 cloacal tubercles contacting one another on each side of holotype].

Thigh, shank, and postaxial half of dorsal foot (at base of toes IV–V) tuberculate; tubercles of leg subpyrimidal, unicarinate, largest about same size as those on dorsum, about six times as large as small granular scales between them; tubercles on thigh decreasing in size postaxially, grading to tiny granular scales on postaxial edge of thigh (no sharp transition along postaxial edge of thigh); ventral thigh entirely granular (30 %, n = 23) or granular except for row of 1–7 (3–13 total count including both sides; 70 % of the time; Fig. 3 View FIGURE 3 ) flat enlarged subfemoral scales [ventral thigh entirely granular in holotype, lacking enlarged subfemoral scales]; enlarged subfemoral scales separated from one another by gaps occupied by granular scales; gaps between subfemorals increasing in width distally; sole covered in flat, juxtaposed to weakly imbricate, rounded scales; lamellae under toe I 8–10 [10], under toe II 11–16 [13], under toe III 16–19 [16]; under toe IV 18–24 [19], under toe V 17–20 [18]; one or two scales widened and similar to lamellae extending onto sole at base of toes II–V, three or four extending onto sole at base of toe I.

Coloration. In life (based on field notes of M.B. Harvey and photos of all specimens collected by the summer 2015 expedition to Aceh), Cyrtodactylus lateralis resembles tree bark. This species has a gray, light brown, or reddish brown ground coloration overlain by diffuse, fine darker speckling in addition to bold, dark brown blotches and pale areas largely devoid of speckling ( Fig. 4 View FIGURE 4 ). Dorsal tubercles are the same color as adjacent scales.

Dorsally, a few, small, dark brown blotches mark the parietal and occipital regions; however, the rest of the dorsal head is usually devoid of solid dark brown blotches [holotype faded to cream with light brown markings]. The supraciliaries are suffused with orange; they may be almost entirely orange in young specimens, whereas brown pigment obscures the orange supraciliary pigment in older individuals. A wide band extends from the rostral to the eye and continues as a postocular stripe to the arm. The facial band is always weakly defined and may be quite diffuse in some specimens [loreal region of holotype brownish]. Behind the eye, weak, thin, and often broken black pinstripes edge the postocular band dorsally and ventrally [postocular band with black pinstripes extending above and slightly behind arm]. Several rows of temporals above the black pinstripe are cream, pale gray, or pale yellow. These pale temporals form a band behind the eye that breaks up into subcircular spots at the back of the head and on the neck. The labials are also pale, almost immaculate to heavily mottled but always contrasting with the facial band and gular skin [bands of melanophores covering supralabials 5–6, anterior portion of 7, and 8–9 on left/ 1–2 and 9–10 on right; chin diffusely speckled with melanophores]. In specimens with mottled labials, subcircular cream, pale gray, or pale yellow spots, each about as large as a supralabial, mark the labial series.

The iris is grayish tan or tan, heavily reticulated with black lines. The ciliary body is only slightly lighter than the iris and indistinct. The tongue is white and lacks the black ventral patch described for some congeners ( Harvey et al. 2015); the buccal epithelium is pink.

Cyrtodactylus lateralis has a broken V-shaped mark on the nape, one narrow band on the neck, 5–6 [5] bands on the body, and 7–9 (8 ± 1) [7] bands on the tail. Bands on the neck and body usually break up into oval blotches, and pale areas separate the bands middorsally and on the upper flanks. Bands on the body usually have a “butterflylike” shape [ Fig. 1 View FIGURE 1 , 4 View FIGURE 4 , see also plate 1, figure 4 of Werner, 1896]. The lower flanks are darkly pigmented and frequently sharply contrast with a pale ventrolateral fold or a fold of the same color with pale yellow or cream spinose tubercles [fold of holotype like flanks, covered in melanophores but with large spinose tubercles of fold white and lacking melanophores]. Caudal bands are square to rectangular, narrower than the pale interspaces at the base of the tail, but longer than the interspaces distally. The third caudal band is 0.60–1.17 (0.89 ± 2.3, n = 4) [0.86] times as long as the interspace behind it; it extends for 15–27 (21 ± 4, n = 7) [25] vertebral granules and the interspace extends for 18–29 (24 ± 4, n = 6) [29] granules. Distally, the caudal interspaces become increasingly more pale. Ventrally, the caudal bands are continuous (i.e., the tail is ringed), however the ventral surface of the tail is paler than the lateral and dorsal sides. Regenerated tails lack bands and are tan to brown with irregular or broken, sinuous lines extending longitudinally to the tip. The brachium, antebrachium, thigh, and shank each bears two to three diffuse (i.e., dark speckling rather than solid bands like those on the body and tail) bands and banding extends to the hands and feet.

Except for the tail, the venter is pale pink and immaculate to diffusely mottled with dark brown [diffuse melanophones in holotype]. Palms and soles are charcoal or pale charcoal [light brown]. Adult males have a distinctive pale orange patch surrounding the precloacal sulcus ( Fig. 4 View FIGURE 4 ) and extending posteriorly for about five rows behind the sulcus. The pale orange pore-bearing scales contrast with red secretions exuding from the pores. Extending distally from the precloacal area, widely spaced, enlarged subfemoral scales are also pale orange in males and contrast with the pinkish skin of the ventral thigh. Females lack orange pigment in the precloacal region. In females, enlarged scales homologous with the pore-bearing series of males are pinkish and immaculate, whereas small granules adjacent to them are a slightly darker shade of pink and may be diffusely mottled [granular scale of thighs and precloacal region diffusely covered in melanophores but enlarged precloacal scales of holotype nearly immaculate]. In both sexes, cloacal tubercles are pale yellow or cream and contrast with surrounding skin; they are the same color as the largest spinose tubercles of the ventrolateral fold.

Distribution, Natural History, and Remarks Regarding the Type Locality. Cyrtodactylus lateralis occurs in Aceh and Sumatera Utara Provinces, Sumatra, Indonesia ( Manthey & Grossmann 1997; this study). In their checklist of Sumatran reptiles and amphibians, Teynié et al. (2010, their Table 1 View TABLE 1 ) added “Mentawai Archipelago and other islands of the West coast of Sumatra (Simeulue, Nias, and so on)” to the range of C. lateralis . We have been unable to locate any specimen from these islands or any other reference to its occurrence there.

To our knowledge, the holotype is the only specimen known from Sumatera Utara. Werner (1896) only reported “Sumatra” as the type locality and in his 1900 checklist failed to add any additional information. Perhaps after conducting her own investigation into the origin of the holotype, De Rooij (1915) reported C. lateralis from “Deli!,” an old name for the area around modern Medan. Ludwig Martin collected the holotype of C. lateralis .

Letters accompanying the specimens kindly provided to M. B. Harvey by the Historischen Bild- und Schriftgutsammlungen (Historical pictures and documents collections) of the Museum für Naturkunde Berlin were sent from “Bindji, Deli, Sumatra.” A staff member (Malschie) of the ZMB tallied the contents of this shipment on 19 March 1891. The list included 75 specimens of reptiles and amphibians in addition to various mammals. The museum did not purchase some of the reptiles and amphibians, and ultimately paid 45 Marks for the remainder. Other authors have published on specimens collected by L. Martin such as Cameron (1906) who described Phaedraspis, a new genus of ichneumonid wasp from “Bindji, Deli, Sumatra.” Bindji likely refers to the modern city of Binjai (sometimes spelled “Bindjai”), Sumatera Utara, 3.6001 ° N, 98.4854 °E, 28 m elevation (coordinates based on Falling Rain Genomics Inc. 2015), bordered by Deli Serdang Regency to the east and Langkat Regency to the west. About 8 air km (22 road km) separate Binjai from Medan ( Fig. 5 View FIGURE 5 ).

Cyrtodactylus lateralis lives singly or in pairs on the trunks of large trees with buttressed roots. We found these geckos at night (20:00– 23: 44 hrs), 1.0–5.0 m aboveground, between 685–1065 m elevation on Gunung Seulawah Agam and at 498 m on the nearby Gunung Batee Meucica. Although we visited these sites during the dry season, rain fell during our trips (July 30 and August 1, 2015) to Seulawah Agam. In contrast, Batee Meucica was very dry on August 1 and appeared to have received little rain. Although we visited many other forested sites in the interior of Aceh Province, we found no additional specimens of C. lateralis despite considerable effort.

When individual Cyrtodactylus lateralis detected us, they usually remained immobile even when closely approached. One specimen ran around to the other side of a small tree just as the beam of our flashlight illuminated it. These geckos closely resemble tree bark and the long spinose tubercles of the ventrolateral fold appear to help them blend into the substrate. Like other Cyrtodactylus with prehensile tails ( Grismer 2008, 2011; Grismer et al. 2010; Linkem et al. 2008), specimens of C. lateralis coiled their tails while resting in collecting bags and during some photo sessions ( Fig. 4 View FIGURE 4 ). However, in all instances, their tails were fully extended when we first encountered them on tree trunks at night. The release call of C. lateralis is a single “raak” and is surprisingly faint for such a large species. The senior author heard this call several times while taking color notes from this species. Cyrtodactylus lateralis occurs in sympatry with C. quadrivirgatus Taylor. On Gunung Seulawah Agam we found C. quadrivirgatus to be relatively common on 30 July and 1 August, however all specimens were on the ground or in low vegetation. Cyrtodactylus quadrivirgatus likely enters the microhabitat of C. lateralis rarely, if ever.

Remarks. For its age, the holotype remains in good condition ( Fig. 1 View FIGURE 1 ). The specimen does not bear a tag; it is stored by itself in a jar containing a small white tag with the ZMB # “ 12029 ” written on it. The jar contains a second old, very faded tag with “ Gymnodactylus lateralis ” written at the top and some mostly illegible script at the bottom. The tail has been broken off, but is intact and not regenerated. The abdominal cavity has not been opened. Only relatively small patches of skin are missing from the right and left sides of the neck, the dorsal surface of the left leg, and posterior left flank. Although faded, diagnostic elements of the color pattern remain visible. 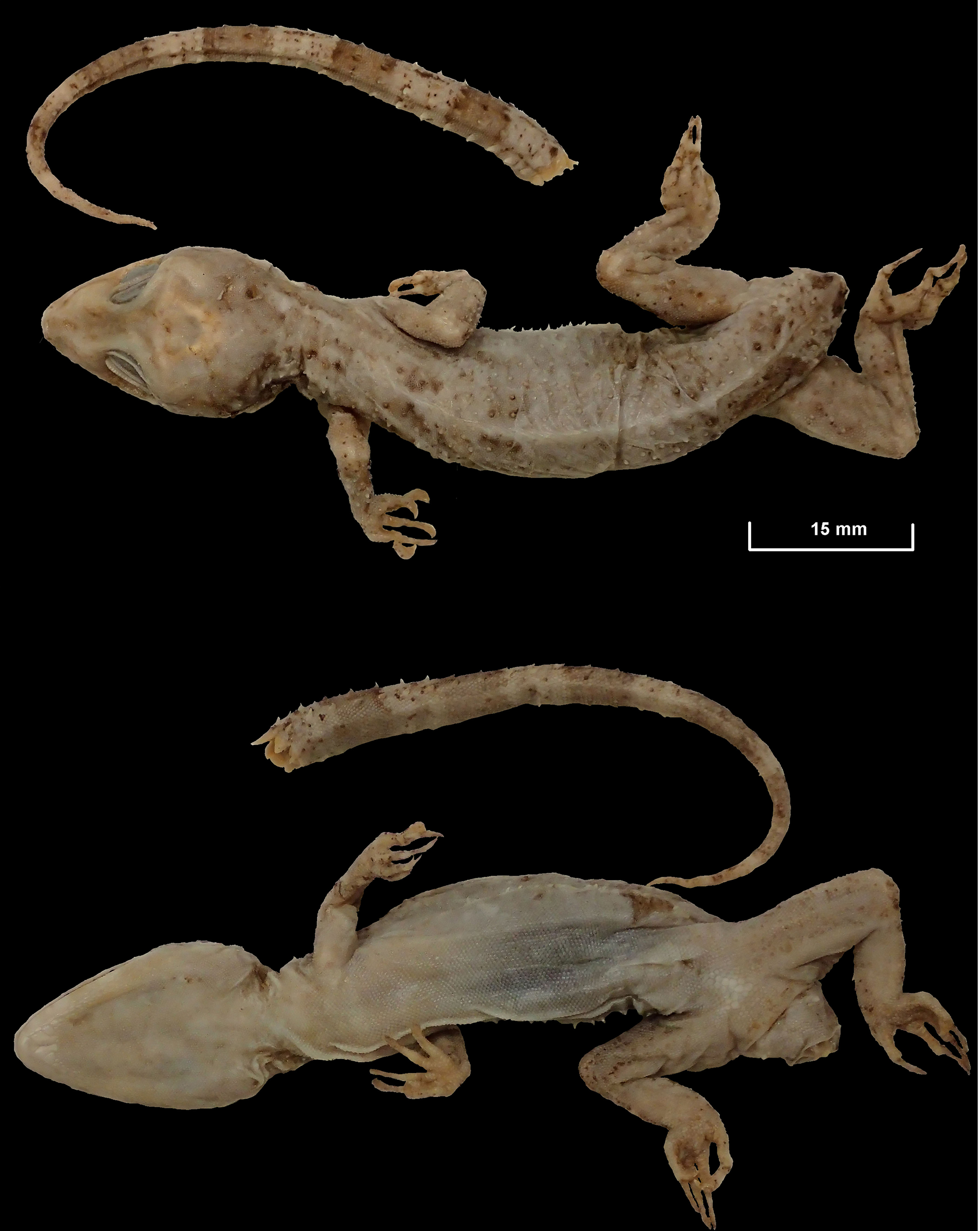 FIGURE 2. Morphology of (A) dorsal tubercles and ventrolateral fold and (B) cloacal region of female holotype of Cyrtodactylus lateralis (ZMB 12029).