Description. Mature nymph. Body length 3.5–4.2 mm, excluding caudal filaments. Head yellow dorsally with a V-shape brown marking encompassing median ocellus between antennae, head width approximately 2.1 times the length. Epicranial sutures evident, passing through anterior margin of lateral ocelli, and between compound eyes and antennal bases, continuing to lateral margin of head. Carapace general coloration dark brown, light yellowishbrown around edges of carapace along flange, and with 2 yellow eye-spot markings on each side of near the midline, two-thirds of the distance along the carapace from the base of the head ( Fig. 1View FIGURES 1 – 3). Cuticle of carapace finely punctated. Distal end of carapace concaving over exhalent notch (arrowed in Fig. 1View FIGURES 1 – 3).

Etymology. Specific epithet from Latin ocellatus meaning eye-spot, referring to the color pattern of eye-spot on the mesonotum.

Remarks. Gillies (1954) suggested that the color pattern of mesonotum could be considered as good specific character for the identification of the different species at the nymphal stages even in the young nymphs (Gillies 1954). However, in Prosopistoma ocellatum  sp. n. as in some Oriental species, e.g. P. palawana Peters, 1967  , P. indicum Peters, 1967  , P. lieftincki Peters, 1967  and P. olympus Sartori & Gattolliat, 2003  , the color patterns of the mesonotum vary with different stages and show clearly intraspecific variation: from yellowish brown ( Fig. 3View FIGURES 1 – 3) to dark brown ( Fig. 2View FIGURES 1 – 3) in early stages, the patterns of the carapace become dark brown with 2 pairs of eye-spot markings in the final stage ( Fig. 1View FIGURES 1 – 3). The color pattern seen in some of the younger instars ( Fig. 2View FIGURES 1 – 3) is very similar to that seen in P. s i n e n s e Tong & Dudgeon, 2000 with which it could be confused, but after checking detailed characters by dissecting and mounting on slides, the morphological characters were found to be the same as in the final nymphal stage of P. ocellatum  sp. n. The new species can be easily distinguished from P. sinense Tong & Dudgeon  and the other members of Prosopistoma  by the following combination of characters: (1) antenna 6 - segmented, segment III longest, about 1.2–1.4 times longer than the combined length of segments IV –VI; (2) three bristles at the basis of the inner canine; (3) 10–11 pectinate setae on ventral margin of fore tibiae, ventral and basal half surface of all femora with dense scale-like structures, and (4) color pattern of eye-spot on the mesonotum.

China is one of the most species-rich countries for the genus Prosopistoma  , with five species of the genus up to now ( Fig. 16View FIGURE 16) (Tong & Dudgeon 2000; Zhou & Zheng 2004). Recently P. sinense Tong & Dudgeon  and P. annamense Soldán & Braasch  (formerly reported only from Vietnam and China) have been reported from Thailand (Tungpairojwong & Boonsoong 2011), which shows that the Chinese Prosopistoma  species have a wider geographical distribution range.

Ecological notes. The new species was collected from riffle habitat in forest streams with moderate to fast current in Guangxi and Hainan. Both sampling sites are situated in the National Nature Reserves with undisturbed forests. The stream was around 2–4m width and 10–30cm depth with the cobble and gravel substrate ( Fig. 17View FIGURE 17). Three specimens (two young nymphs and one mature nymph) were examined for gut contents analysis under the dissecting microscope by dissecting and dispersing the stomach contents onto glass slides. The examination revealed only the presence of amorphous detritus-like elements without any remains of head capsules or claws in the gut contents of P. ocellatum  . However, the mandibles have no molar region and well developed pointed apical incisors; the maxillae have a long rigid canine and moveable dentisetae ( Figs 6–8View FIGURES 4 – 9), which would imply that they have predacious habits. We are not sure at the moment if P. ocellatum  is a carnivorous species or not because of the limited of examined individuals. 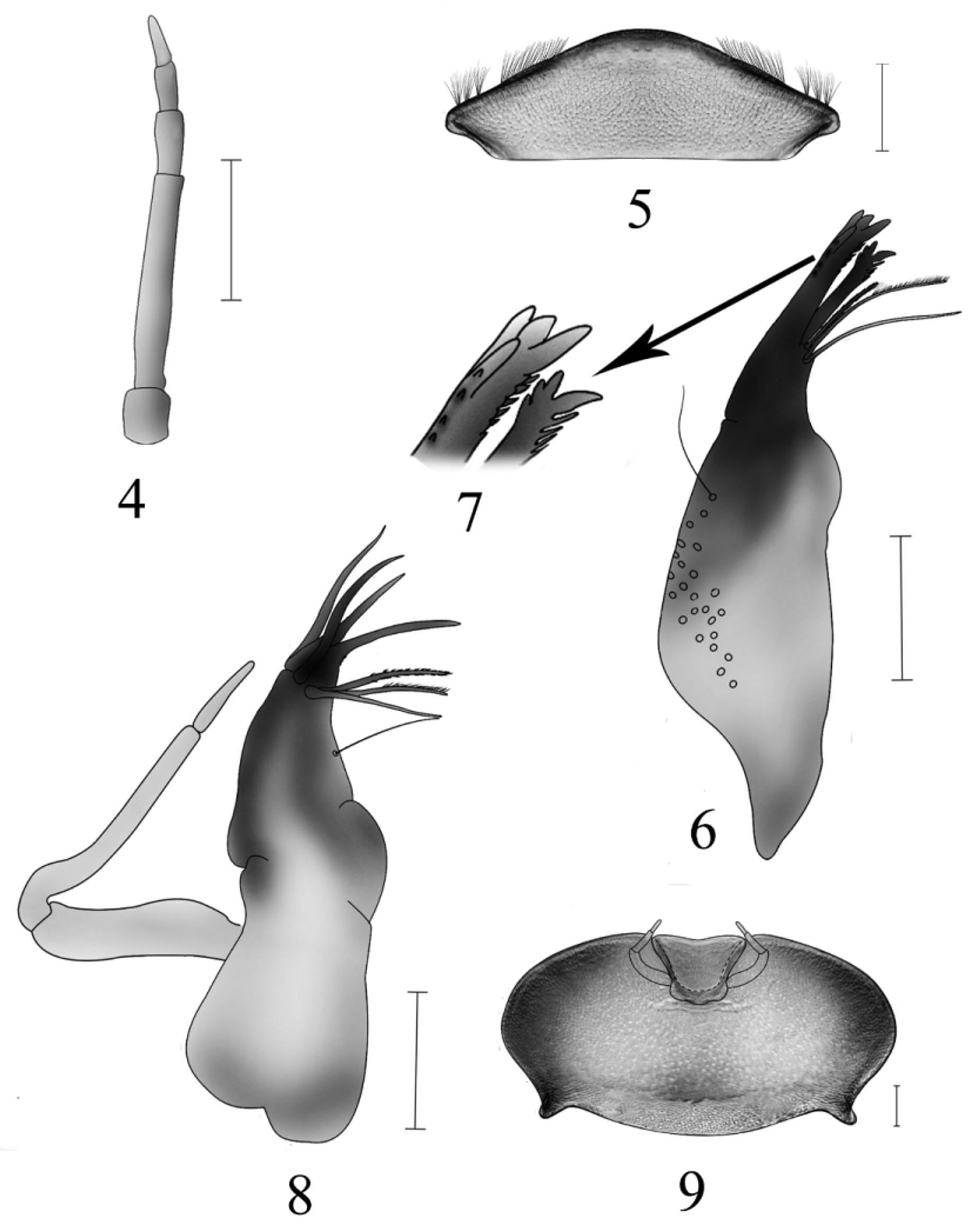