Larvae. No recently collected specimens were available but remains of three larvae extracted from galls collected in Walayar Forest by Odette Rohfritsch in 1971 have the sternal spatula blade reduced to a single small tooth ( Fig. 9 View FIGURES 6 – 9 ).

Pupae. The only specimens available are the remains of four male pupae dissected in 2009 from galls collected by Odette Rohfritsch at Walayar Station in 1971. These do not have any armature on the cephalic sclerites and, so far as can be seen, conform with the pupal characters given for Contarinia carolinae Gagné   in Gagné & Marohasy (1993).

Biology. Rohfritsch (1971) reported that C. manii   (as Lobopteromyia   sp.) was known only from one locality on the eastern side of the Western Ghats and that mature galls, which are 5–7 mm long, were present in February and July, indicating the occurrence of at least two adult generations per annum, at the end of the short rainy seasons in November and June. She also established that the host plant is Acacia ferruginea   D.C.. Her anatomical studies are particularly detailed and show that gall development is initiated by the first instar larva and continues so long as live larvae are present. She also reported that a special nutritive tissue develops in these galls. This species has since been found at a number of locations near Madras.

Etymology. This species is named after the late Professor M.S. Mani in recognition of his studies of Indian plant galls and his major contributions to cecidological research over many years.

Comments. Contarinia   , as currently defined, is a large, catch-all genus and C. manii   does not fit well into even the broad generic definition used here. Final instar larvae do not have the terminal pair of recurved corniform papillae that are so characteristic of most known species and the sternal spatula blade is reduced to a single tooth, whereas sternal spatulae of most known species have a bilobed blade with a long shaft. In addition, the pupa of C. manii   lacks cephalic setae and has very short thoracic spiracles; females have an unusually short ovipositor; males have a darkened and thickened hypoproct and the galls are much more complex than those induced by most known species of Contarinia   . The same applies to C. carolinae   and, so far as is known, to C. ramachandrani   . These differences suggest that these species are part of a monophyletic group of species inducing complex galls on Acacia   in East Africa and southern India and that group may also include C. bivalviae (Rao)   , which induces bi-valved leaf galls on Acacia catechu   in India. Further collections of adult, pupal and larval material are needed to provide the basis for more detailed study of the inducers of these remarkable galls and efforts should be made to record and conserve them. 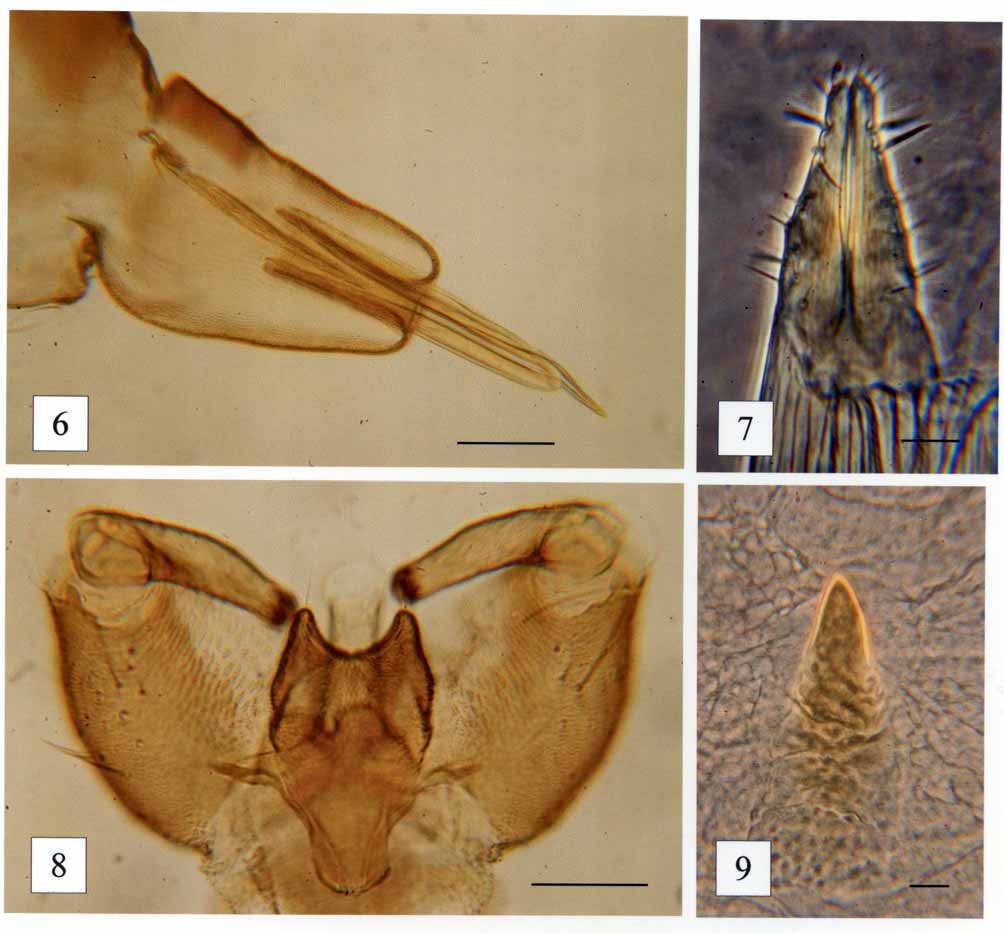