Remarks. The material of Oswaldella occulta  sp. nov. was in the material assigned to O. antarctica ( Jäderholm, 1904)  by Totton (1930) and later described as O. terranovae  by Peña Cantero & Vervoort (1996).

The species seems to have stems slightly polysiphonic only basally. Most of the stems available are deprived of the basal part and it was not possible to ascertain if they were polysiphonic. There are, however, hints indicating that the species can develop a sort of polysiphonic condition. Among the material examined, there is a stem, 105 mm high, provided with the basal part. Its first 13 mm have a few creeping stolons originating from cauline apophyses, some of them running downwards and acting as hydrorhizal stolons. In addition, some of the basally broken stems also have creeping stolons originating from cauline apophyses, although not in their most basal part. It is therefore highly likely that O. occulta  sp. nov. can develop stems with a slightly polysiphonic basal part.

Oswaldella occulta  sp. nov. appears to have unbranched stems, although the issue is as yet unresolved. The available material, however, points to the unbranched condition. The species seems to develop colonies with tuft appearance, with several unbranched stems growing together. In the available material there are some stems apparently branched, but the ‘branches’ are actually new stems. The ‘branching’ is associated with those parts of the stem with creeping stolons originating from cauline apophyses mentioned above. The new stems originate from those stolons, and in all cases they begin with an intermediate internode deprived of cauline apophyses, followed by a normal series of hydrocladia-bearing internodes provided with cauline apophyses. Only in one occasion a secondary stem/branch was observed, developing from a basally and distally broken, 90-mm-high stem. Apart from a basal new stem, with intermediate internode, originating from stolons as explained above, there is a distal stem/branch originating directly from the stem through a hole in the perisarc, not from a stolon. This secondary stem differs from the new stems in being composed of a normal series of hydrocladia-bearing internodes provided with cauline apophyses (i.e. there is no basal intermediate internode).

The material described as Oswaldella  sp. by González Molinero & Peña Cantero (2015) likely belongs to O. occulta  sp. nov. It is morphologically alike and was also collected off Cape Adare. González Molinero & Peña Cantero (2015) indicated that Oswaldella  sp. has usually bifurcated hydrocladia with two secondary hydrocladia, although a third-order hydrocladium was not uncommon. A re-examination of the material has allowed us to put into evidence, despite the low number of hydrocladia left, that the presence of two third-order hydrocladia (one on each secondary hydrocladium) is quite common; on one occasion even two tertiary hydrocladia on the same secondary hydrocladium were observed, which indicates a likely higher degree of hydrocladial branching. The material of Owaldella sp. also shares with Oswaldella occulta  sp. nov. the division of the stem into internodes, the presence of two axillary nematophores on the cauline apophyses, the position of the hydrotheca on the distal half of internode, the size and shape of the hydrotheca, and the relatively large mesial inferior nematotheca.

Etymology. The species name occulta  comes from the Latin occultus, meaning hidden, concealed, and refers to the fact that the species was hidden among material of O. terranovae  and was not noticed by Totton (1930) when he first studied this material. 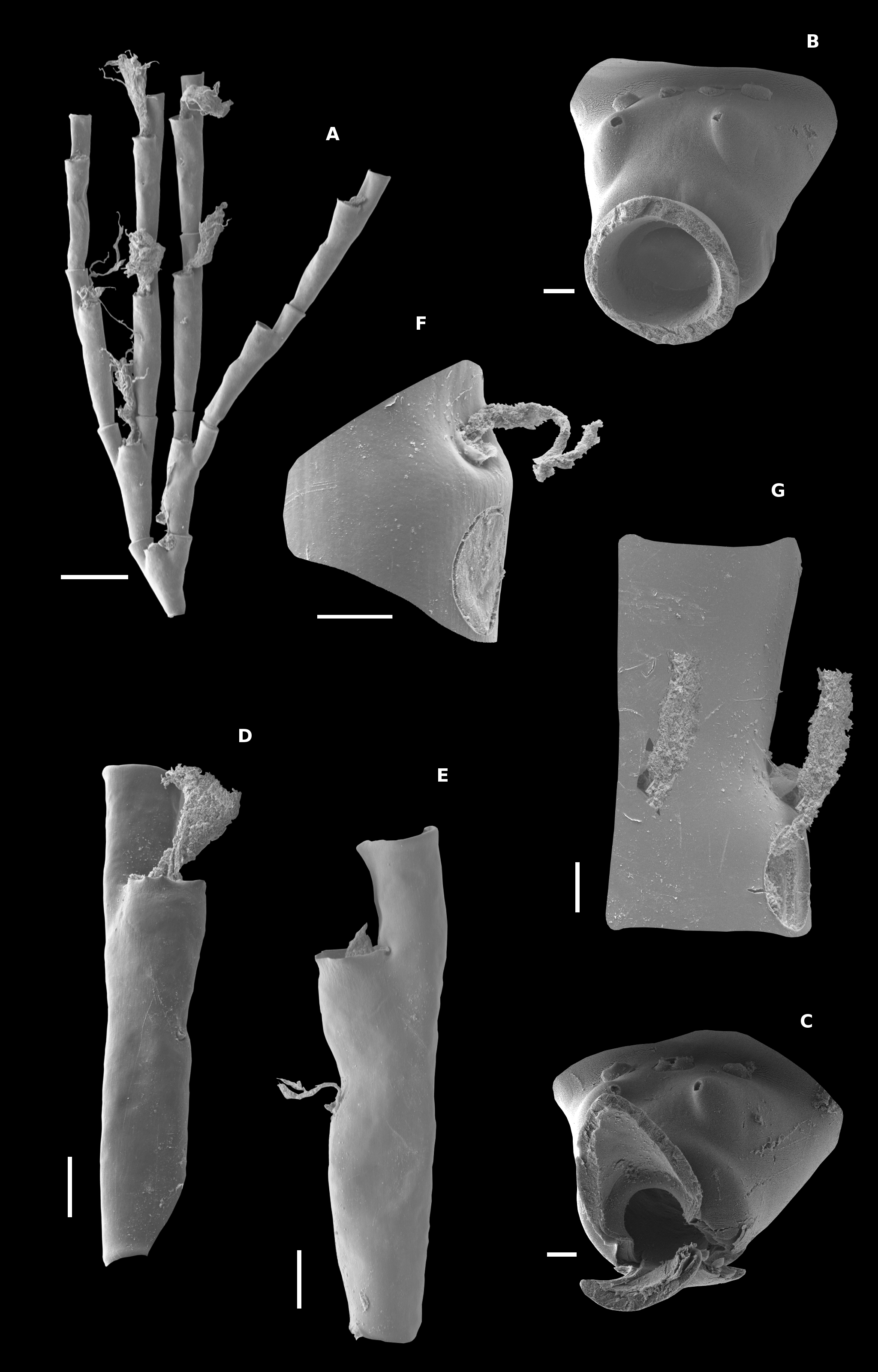