Diagnosis. Wings weakly falcate. Forewing with one radial and one or two outer gradate crossveins. Male ectoproct with a hooklike projection on the tip. Male gonocoxite X (mediuncus) spirally coiled. Male sternites VIII and IX with lateral projections bearing large sclerotized setae at the apex, one at the eighth and two at the ninth (different from S. fernandezi   and S. sanctarosae   with two and one setae on both projections respectively). Female gonocoxite VIII extending downwards, subtriangular, with posterior margin rounded and bearing two elongate lateral tubercles (different from the other two species, with lateral tubercles shorter).

Thorax, dorsal view, mostly yellow with lateral areas brown and with a thin medial longitudinal dark line that extends from the anterior margin of the pronotum until the apex of the metascutellum. Pronotum subquadrate, with the lateral areas extending downward, and covered with setae mainly on the brown areas. Cervical sclerites brown and covered with elongated setae. Pterothorax with sutures between scutum, prescutum and scutellum black; pleural region brownish with the mesothorax slightly darker than metathorax. Mesepisternum covered with white setae anteriorly.

Legs: forecoxa elongated, about as long and wide as femur and tibia; mid and hindcoxa about half long as femur and tibia but wider than both. Forecoxa yellow with few brown areas; mid and hindcoxa brownish but midcoxa slightly darker. Trochanter and femur yellow with small brown spots on the inferior surface. Tibia yellow with scattered brown spots. Tarsi yellow except by the darker distal apex of the tarsomeres. Legs covered with white and black setae. Tarsomere tips with two large and robust setae.

Male terminalia ( Fig 4 – 5 View FIGURE 4 View FIGURE 5 ): ectoproct + tergite IX with the callus cerci weakly developed but bearing trichobothria; posterior margin with a hooklike projection at the tip, projection inward curved (Fig: 4). Sternite VIII with a thin projection on each posteroventral corner, each projection with tip slightly curved dorsally, and bearing one strong setae on the tip (Fig: 4). Sternite IX with a pair of projections on posterior margin, each projection straight with two strong setae on the tip (Fig: 4). Gonocoxites IX with upcurved hooks at the posterior margin, medial region slightly curved, and anterior region forming a right angle and extending up to the apex of the projections at the sternite IX (Fig: 5). Gonocoxite X (mediuncus) spirally coiled (Fig: 5).

Etymology. Species was named after the Tocantins state, where the type specimens were collected.

Type locality. All specimens were collected at the same place, a ranch located on the municipality of Palmas, Tocantins, Brazil ( Fig 1 View FIGURE 1 ). The ranch is located in an area of typical Cerrado, which is characterized by the presence of trees that are short, inclined, tortuous and with irregular ramifications; presence of some small bushes; and is constantly affected by fire (ICMBio 2014). One male was collected in June, a male and a female in July, and another male in August; months included within Tocantins dry season, that usually extends from April/May to September/October. 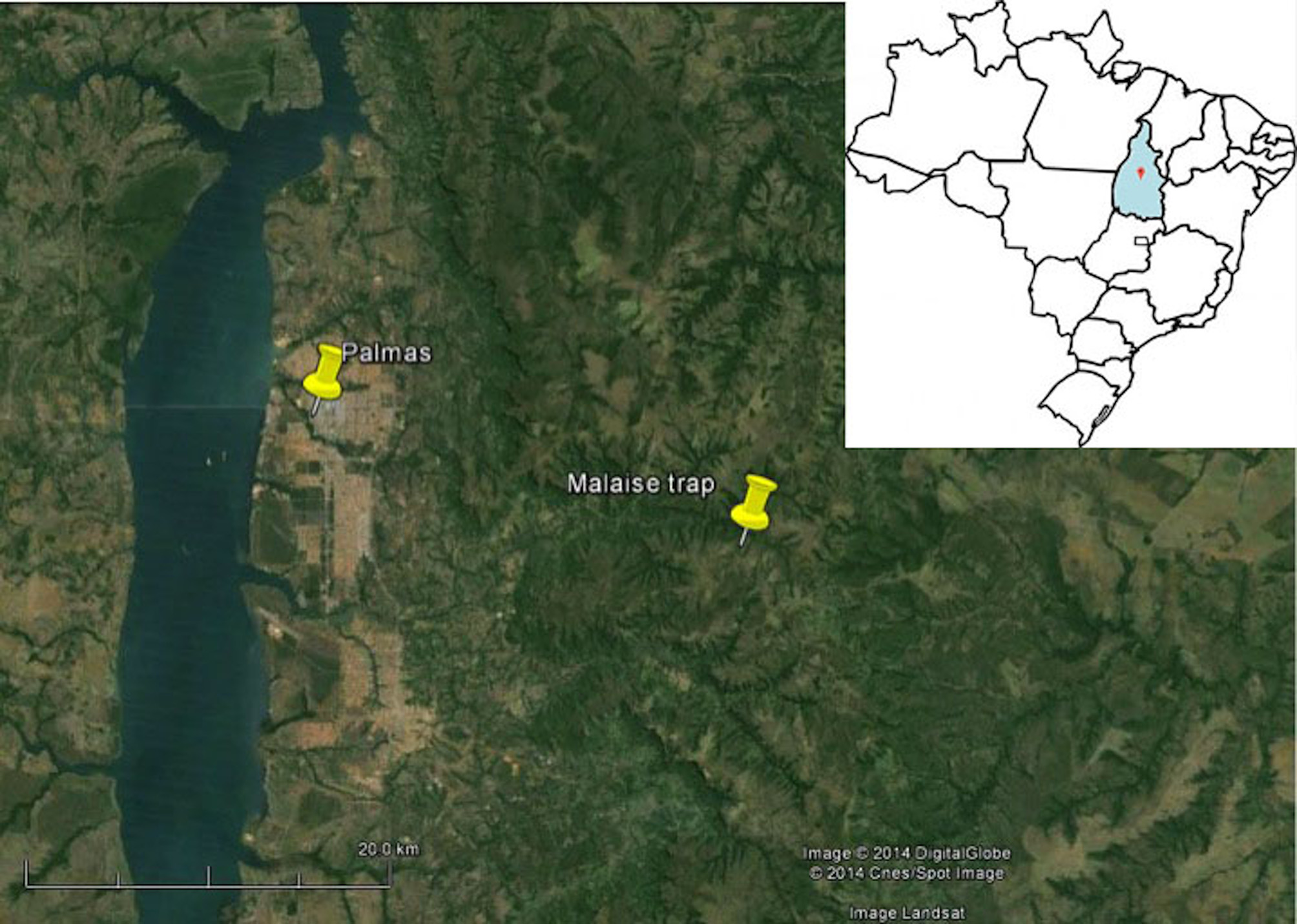 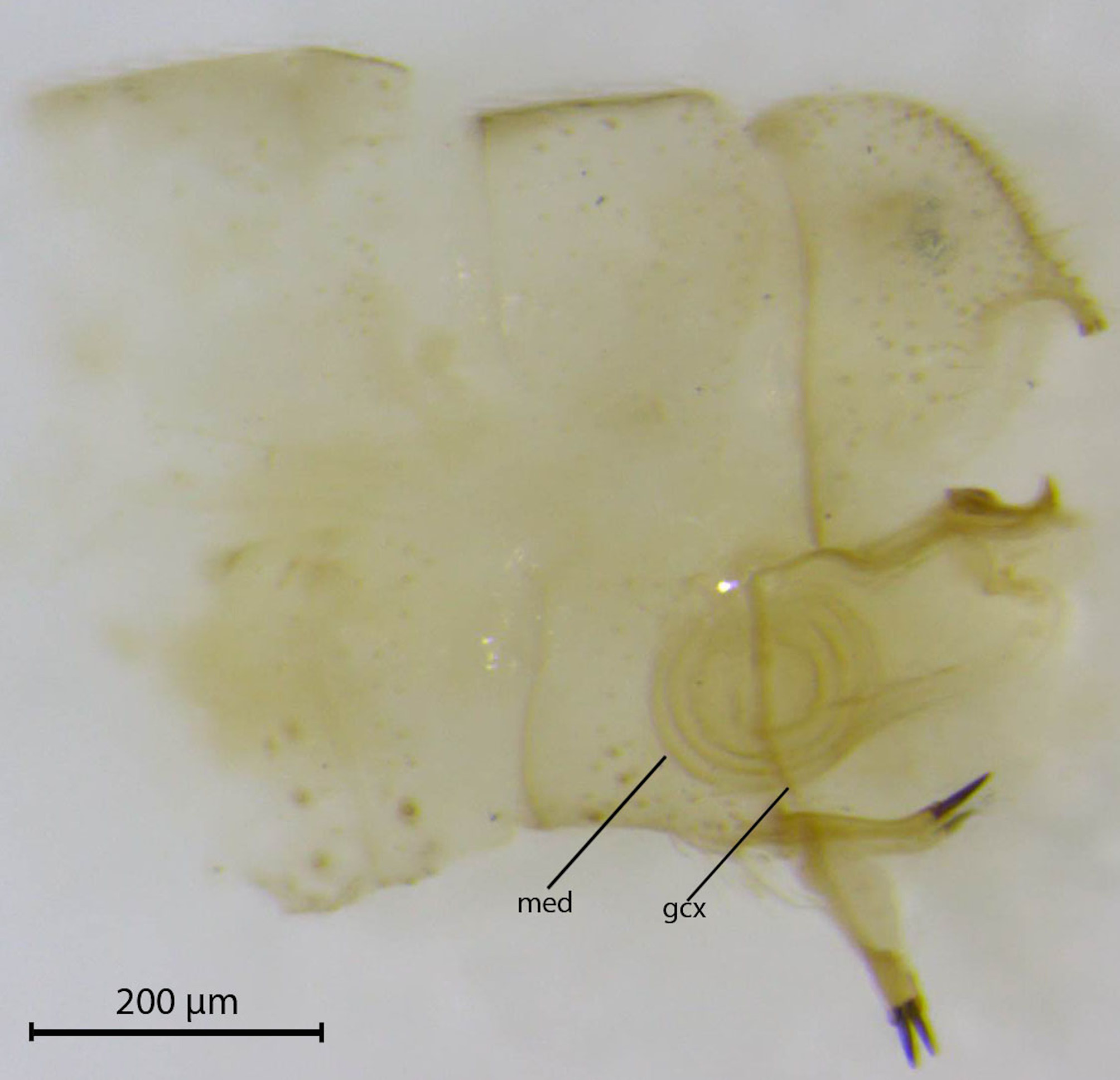