Diagnosis. L. serrulatus   sp. nov. resembles L. sari Maulik (1926)   and L. puncti Maulik (1926)   . But it can be distinguished from these by the unique structure of metatibial spine which is serrulate on its either side dorsally in the new species. The metatibial spine is not serrulate in any other species of south Indian Longitarsus   . The dorsal opening, which is as long as half of the median lobe of the aedeagus, is another diagnostic feature of this new species.

On all three host plants, leaf damage was caused by adult beetles which are mainly nocturnal. They scrape the epidermis and soft leaf tissue on the dorsal side, leaving dark patches of feeding scars which later develop into “shot holes”. Numerous discontinuous scars of approximately 1 mm 2 were noticed on leaves. Adjacent scars often coalesce, leaving large areas of leaves damaged. The damage on the host plants was assessed by observing percentage leaf infestation, number of feeding scars per leaf and percentage leaf area damaged. The latter two were measured from one leaf each from the top, middle and bottom strata of a single twig, selected at random. The observations were made on three twigs. The results are given in table 1.

leaf leaf leaf leaf leaf leaf In Chinese potato, all observed leaves of the plant were found scraped and eaten. The number of feeding scars were minimal on upper leaves, progressively increasing on lower leaves in a twig. However the percentage leaf area damage was more on younger leaves compared to older ones, indicating a marked preference for younger leaves by the beetles. In the other two host plants, there was no damage on upper leaves. The number of feeding scars, as well as percentage leaf area damaged, increased with age of leaf, showing preference for older leaves. These observations would suggest that the beetle has close association with secondary metabolites of the host plant. The indication is that the secondary metabolites present in upper leaves of P. rotundifolius   act as a phagostimulant for beetles while those in the other two hosts may be acting as deterrents. Immature stages of L. serrulatus   were found in the root zone of P. rotundifolius   only. Only adult feeding was observed on the other two hosts. Larvae probably feed on the roots of P. rotundifolius   and pupation occurs in earthen cells in the soil. As many as nine larvae and 15 pupae could be detected in 100 cm ³ soil drawn from the root zone (top 20 cm of soil) of P. rotundifolius   . Thus, P. rotundifolius   is the true host plant on which L. serrulatus   breeds while P. amboinicus   and P. scutellarioides   serve as collateral adult food plants. L. serrulatus   is likely to become a serious pest of P. rotundifolius   due to dual feeding of both larvae and adults on the roots and leaves respectively, affecting transport of nutrients as well as photosynthetic efficiency of the plant, the most important physiological parameters having direct bearing on tuber yield. 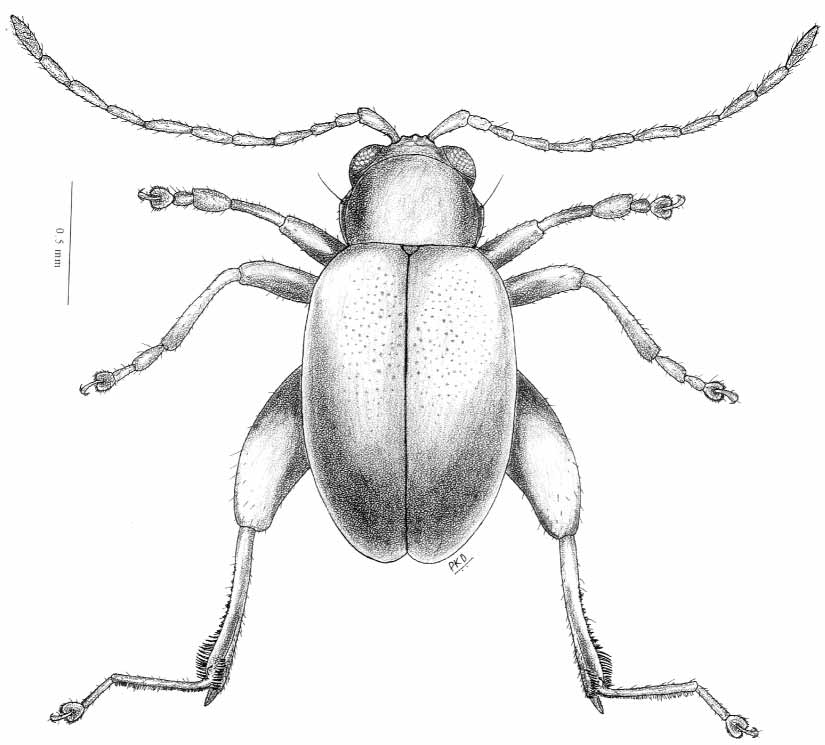