The general appearance of Oreodera kawasae sp. nov. is much as that of O. turnbowi McCarty, 2001 . However, although McCarty (2001) had only provided the length of the holotype male and paratype female, it is possible to see, using photographs of the holotype (see Bezark 2021b), that O. turnbowi is proportionally more slender than O. kawasae sp. nov. Additionally, comparing the males of O. kawasae sp. nov. with the holotype male of O. turnbowi , it is possible to provide the following differences: distance between upper eye lobes equal to maximum width of the scape; antennomeres VII and IX not ringed with white pubescence basally; anterolateral tubercles of the prothorax with apex noticeably rounded; elytra at most 4.0 times prothoracic length; centrobasal crest of the elytra not distinctly separated into two tubercles; tarsomeres V shorter and distinctly widened. In the holotype male of O. turnbowi , distance between upper eye lobes shorter than maximum width of scape, antennomeres VII and IX distinctly ringed with whitish pubescence basally, anterolateral tubercles of the prothorax nearly conical, elytra is almost 4.5 times prothoracic length, centrobasal crest of the elytra distinctly separated into two distinct tubercles (with punctures between them), and the tarsomeres V are longer and slender. According to McCarty (2001), the mesoventral process in O. turnbowi is 1.25 times as wide as the mesocoxal cavity. As we do not know where the width was measured (narrowest area or apex), we are not using this difference (in O. kawasae sp. nov., 1.3 times in the narrowest area, 1.5 times in apex).

Oreodera kawasae sp. nov. is also similar to O. noguerai McCarty, 2001 , but differs by some of the same characters attributed to O. turnbowi (body proportions, pubescence on antennomeres VII and IX. Unfortunately, O. noguerai is known only from the holotype female, while O. kawasae sp. nov. is known only from males, but it also differs by the antennomere III being about 0.7 times as long as scape (twice as long as scape in O. noguerai ), and apical half of elytral margin without a fringe of sparse, fine, erect setae (present in O. noguerai ).

The general appearance of O. kawasae sp. nov. is somewhat similar to that of O. advena Martins & Galileo, 2005 , O. basipenicillata Tippmann, 1960 , O. undulata Bates, 1861 , and O. clarkei Galileo, Santos-Silva & Wappes, 2017 (see photographs of these four species on Bezark 2021b), but differs from them especially by the elytral pubescence pattern, and protarsal length and shape.

This species is named after Blanca Jeannette Kawas Fernández (Jeanette Kawas for short) in honor of her never-ending efforts to conserve the fauna and flora of Honduras. She co-established the Prolansate Foundation, which is still committed to protecting the environment while improving the quality of life of the local communities. Jeanette was murdered at her home in February 1995.

LEGS. Femora mostly with greenish-brown pubescence (appearing to be lighter depending on light intensity), with arched pale yellow pubescent ring on middle of club, and small pale yellow pubescent spots between it and apex. Tibiae with light yellowish-brown pubescent ring on basal third (protibiae) or quarter (meso- and metatibiae), ring with yellowish-white pubescence centrally, ring with sparse brownish pubescence between previous rings, sparse brownish pubescence dorsally and laterally on posterior quarter, bristly yellowish-brown pubescence ventrally on posterior quarter; posterior quarter of ventral surface of protibiae sinuous, with distinct projection on base of this area; dorsal surface of posterior quarter of meso- and metatibiae with short, erect, thick black setae dorsally. Protarsi not noticeably long; inner side of tarsomere II with distinct projection ( Fig. 17 View Figs 13–19 ). Tarsomeres I–II with pale yellow pubescence; tarsomeres III–V with brownish pubescence, shorter and sparser than on anterior segments; metatarsomere I slightly longer than II–III together.

A specimen from CNP of this species has been sequenced by the Centre for Biodiversity Genomics (CBG) as part of a separate project ( D’Souza & Hebert 2018, project doi: https://doi.org/10.5883/DS-MECNP), but until now it has remained unidentified. The sequence (Cytochrome Oxidase Subunit 1 5’ Region) can be accessed through the BOLDSystems database, with ID number GMHGE319-13.

Apparently, the new species is somewhat common. Therefore, it is likely that there are many specimens incorrectly identified in the collections. 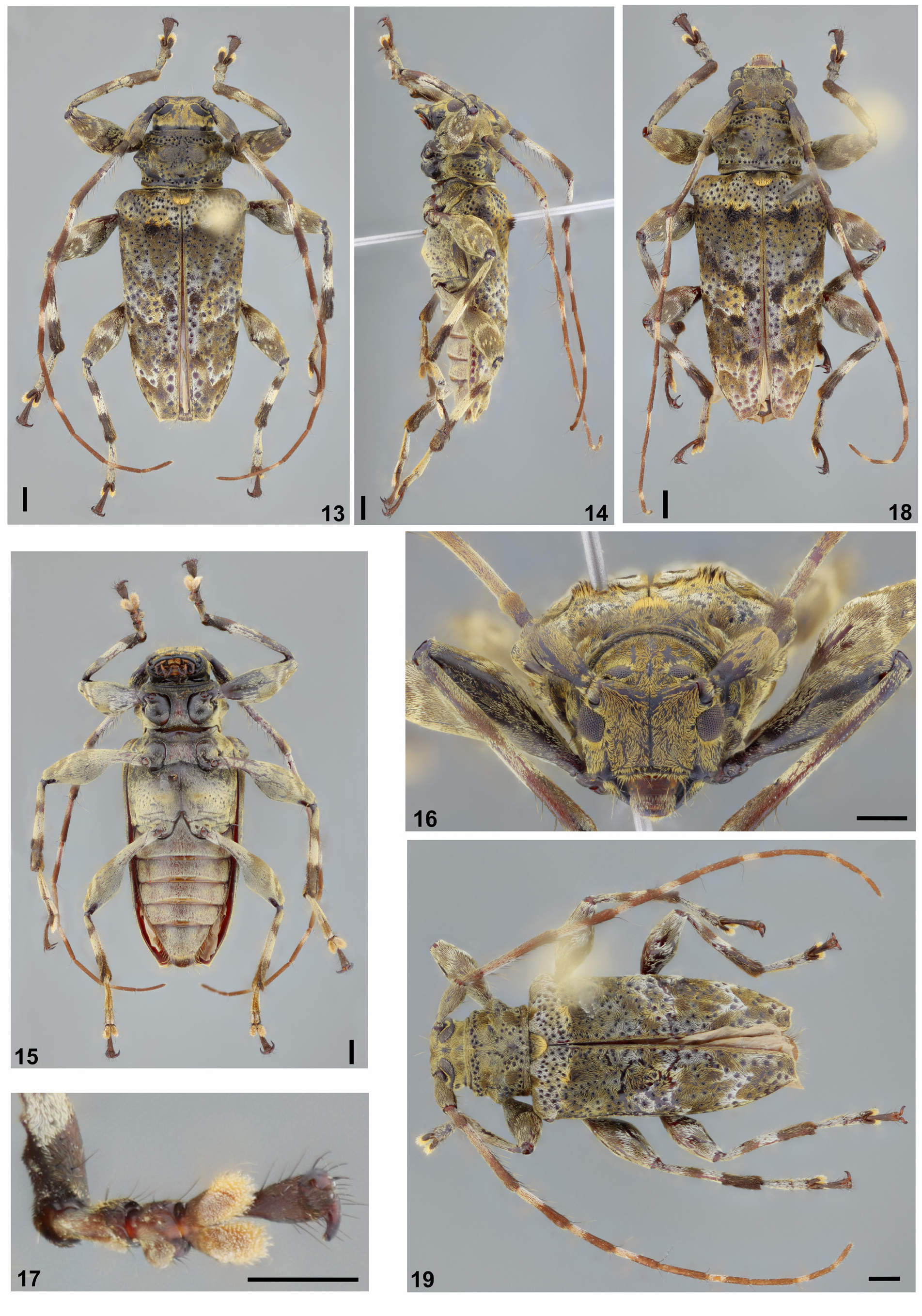