Etymology. The specific epithet is dedicated to Mrs. Maria Fernanda Torres, retired staff member of the Museu Goeldi, who collected the holotype.

Remarks. The finding of a species of Paramasaris in eastern Pará state is possibly indicative of some hidden diversity of this genus in Amazonia as predicted by Hermes & Garcete-Barret (2009). It is possibly the only lineage of Neotropical masarines with representative species in rain forest areas, most other groups occurring mainly in more arid regions covered by open vegetation types, and in Patagonia (Carpenter 1988; Carpenter et al. 2006). Trimeria rubra Hermes & Melo, 2006 , was described from the state of Rondônia, but the collecting locality (Vilhena) is practically at the frontier with Mato Grosso, in a region under strong influence of the Brazilian central cerrados (as marginal vegetation mosaics), and just south of more typical Amazonian areas. While also occupying a marginal position in the Amazonian biome, the collecting locality of P. fernandae sp. nov. in Serra Norte, in Pará state, is originally mainly covered by rain forest, also presenting relatively small spots of savanna-like vegetation (hematitic canga) developing upon iron ore outcrops on some hill summits ( Porto & Silva 1989; Silva 1991). Specifically, the collecting site “Pedreira” is a rain forest location distant a few kilometers of nearest “canga” vegetation occurrences. The holotype was probably collected at a road margin in a forested area. In addition and very interestingly, P. fernandae sp. nov. is not closely related to other Paramasaris species occurring in cerrado areas or in southern Brazil ( P. richardsi , P. brasiliensis ), but to other two species known to occur only in northwestern South America, P. cupreus and P. fuscipennis (see below). Paramasaris wasps are clearly undersampled in Amazonia, being possibly bypassed in vespid inventories for their quite small size, and atypical unfolded anterior wings.

Carpenter (1989) in his phylogenetic study of the tribe Gayellini, cleared the relationships between the four species of Paramasaris (that he demonstrated should include Paragayella richardsii Giordani Soika). In Carpenter´s tree, P. cupreus and P. fuscipennis are sister groups, with support of four synapomorphies: paraglossae also lacking acroglossal buttons; female clypeus with a pair of short apical carinae; second pronotal carina more complete dorsally; longitudinal carina on T 2 well developed in female. Paramasaris fernandae sp. nov. presents all of these characters and is thus a member of that monophyletic group. The new species differs from both P. fuscipennis and P. cupreus by having circular foveae along the mesepisternal sulcus being distinctly smaller and more hidden under the whitish setae that covers the whole lateral aspect of the mesosoma ( Fig. 2 View FIGURE 2. A C). In the other species the foveae are larger (see Figs 1 View FIGURE 1. A B, 2 A for P. cupreus ). The first metasomal segment is also longer and slender in P. fernandae sp. nov., its length being 2.55 × as large as maximum apical width, while in the other two species this ratio is only 2.25 × ( Figs 1 View FIGURE 1. A B, 2 B). Paramasaris fernandae sp. nov. is intermediate between those species in respect to condition of the oblique carinae on the dorsolateral surface of the propodeum. These carinae are more strongly developed in P. fuscipennis , with associated very dense whitish setae ( Fig. 2 View FIGURE 2. A B). In P. fernandae sp. nov. they are fairly distinct and also associated to a lateral longitudinal furrow near the base of the propodeal valvula ( Fig. 2 View FIGURE 2. A E), a character not occurring in P. cupreus ( Figs 1 View FIGURE 1. A B, 2 A) (not examined in P. fuscipennis ). While more similar in size to P. cupreus , the new species is also distinguishable from it by having only the fore tibia and tarsus tinged of light (testaceous) brown, and not the entire set of femur+tibia+tarsus lighter as in types of P. cupreus (compare Figs 1 A View FIGURE 1. A –B). Quite differently, ground color of the whole fore leg is darker brown in P. fuscipennis .

In the key for Paramasaris species ( Carpenter 1989), P. fernandae sp. nov. runs to couplet 3, which should be modified accordingly as follows: 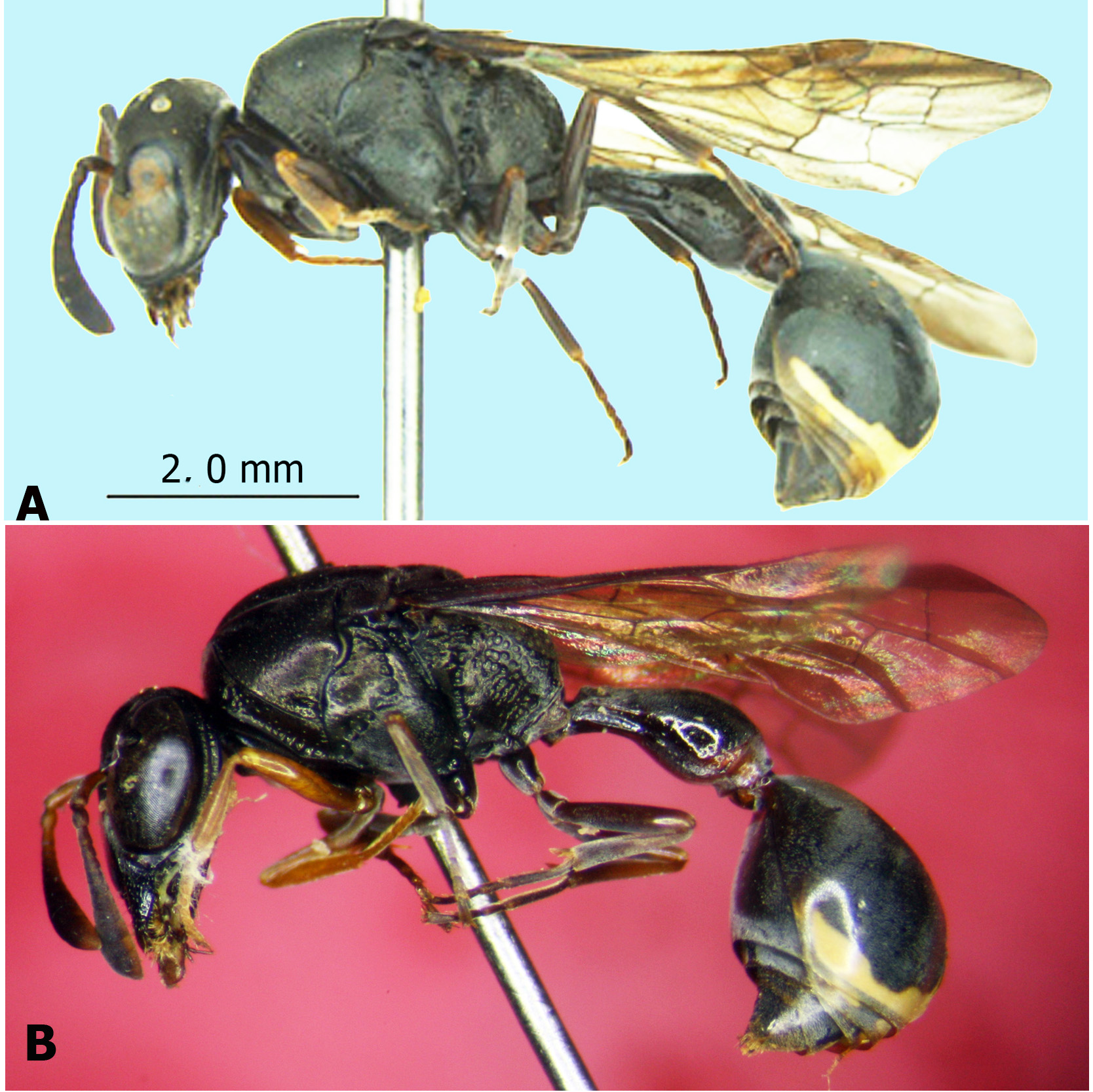 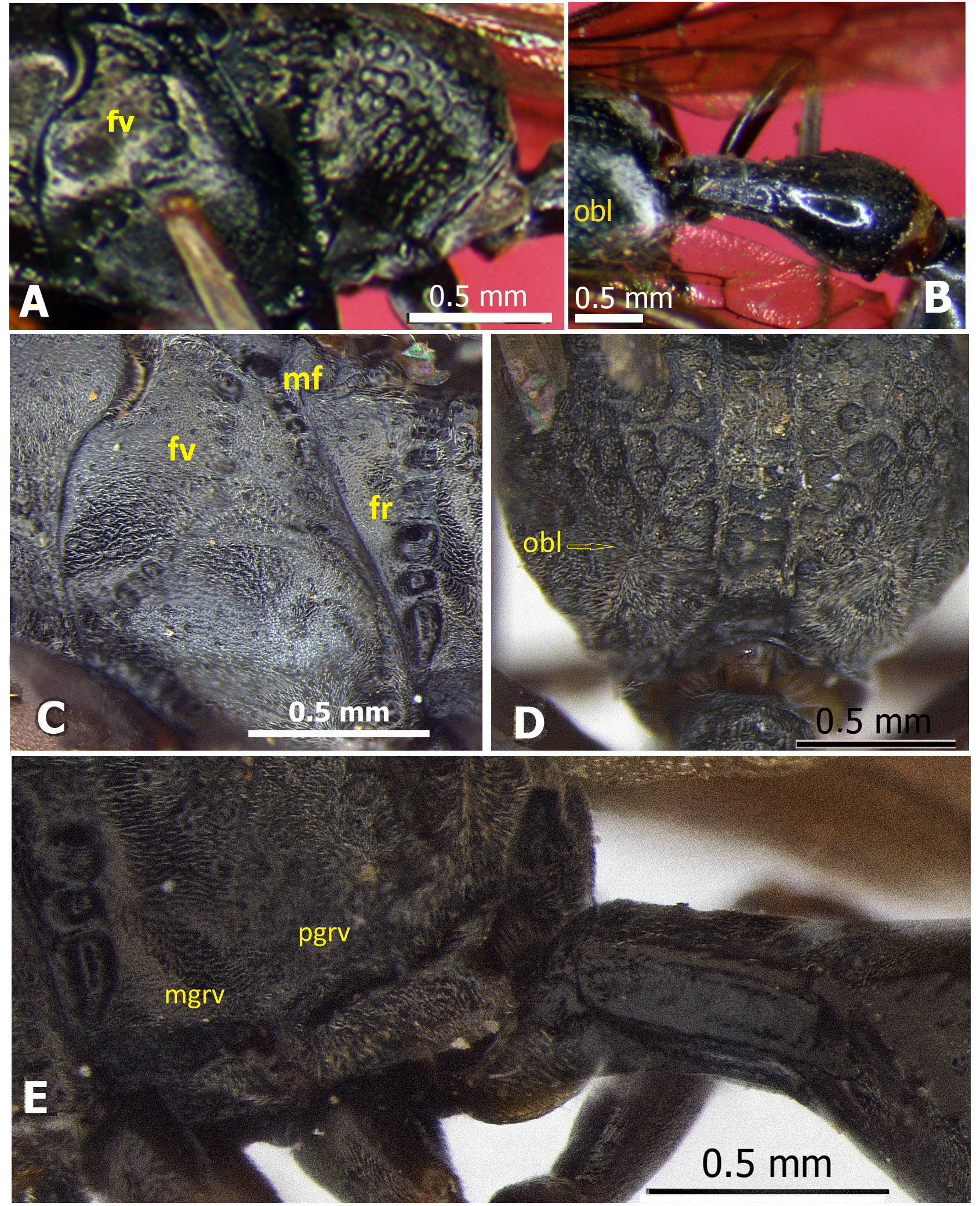