Günther (1939) assigned the genus Lamellitettigodes  to the subfamily of Metrodorinae  because of the lateral lobes: they are almost, but not completely, attached as in Paratettix  Bolívar, 1887. This was the main character used when the subfamily was established by Bolívar (1887), and Günther also adopted it. Today, typically Metrodorinae  are mainly characterized by having the median ocellus and the antenna placed below the eyes, a relatively small divergence of the rami of the frontal costa not forming wide scutellum, and a similar length of the first and third segments of the hind tarsus ( Pavón-Gonzalo et al. 2012). Many species of Metrodorinae  also exhibit the posterior angles of the lateral lobes of the pronotum produced outwards, often becoming acutely spinose. These characters taken together separate the subfamily from the other eight subfamilies of Tetrigidae  , although no single character is enough to characterize Metrodorinae  by itself ( Tumbrinck and Skejo 2017).

Günther (1939) gave a detailed description of the genus, which is no longer applicable in some of its parts and must be amended. An improved redescription based on his description is presented here.

Body of moderate size, slender. Head and pronotum smooth. Head and eye in lateral view not at all or slightly elevated above the pronotal discus. Antenna more than 1.5 times longer than fore femur, dorsal margin of antennal groove a little bit above the ventral margin of eye, between the eyes. Eyes small and in lateral view blunt and indistinctly conoidal. Antenna filiform, 14-segmented in male (including scapus and pedicel), 15-segmented in female. Fastigium of vertex in dorsal view as broad as or a little wider than the eye, fastigium in frontal view between the eyes slightly depressed. Fastigium in dorsal view with well-developed medial, lateral carinae, and fossula. Lateral carina clearly elevated, in lateral view weakly visible above the eyes and short, in dorsal view not converging towards the front, almost parallel, bending over at right angles to the medial carina (L-shaped). Transverse carina of the vertex in dorsal view slightly convex or straight. Frontal costa and facial carina in lateral view visible in front of eye (except in L. novaeguineae  ). Tip of fastigium and its frontal costa in lateral view protuberant. Facial carinae in lateral view concave in front of eye and slightly convex in front of antenna. Last segments of maxillary palps not foliaceous. Anterior margin of pronotum truncated. Pronotum slightly between shoulders. Prozonal carina and median carina clear, slightly elevated (lamellate in L. cultratus  and L. novaeguineae  ), interhumeral carina absent, internal lateral carinae not clearly visible. Pronotum behind shoulders weakly depressed on both sides of median carina and here very often provided with black spots (posthumeral spots) on each side. Lateral lobes broadly rounded, not as close to body as in Paratettix.  Tegmen almost as long as the fore femur, rather broad and at the end broadly rounded. Macropterous and macropronotal. Alae clearly exceed the pronotum apex. Hind femora with very small antegenicular and especially genicular teeth, with some sharply tuberculate raised slants of their middle outer surface. Posterior tibia distally not or slightly widened, with a few small spines on upper edges. First segment of the hind tarsus not longer than the third, pulvilli acute, in three species with apical teeth ( L. sagittatus  , L. signatus  , L. karwinkeli  ). The coloration is highly variable and not a useful feature for either generic or specific diagnosis (as reported for Tetriginae  in Lehmann et al. 2017).

The genus Lamellitettigodes  is characterized by a protuberant tip of fastigium and frontal costa (in lateral view); facial carinae in lateral view visible and clearly concave in front of eye and slightly convex in front of antenna. Only in L. novaeguineae  is tip of pronotum not visible in lateral view, but present. Additional characters for the genus are: 1) lateral carina of the vertex in frontal view clearly elevated as small fastigial horns, but in lateral view weakly visible above the eyes (Plate 5Q, R, V, WView Plate 5); 2) median carina continuous to the tip of the pronotum; 3) clearly keeled or lamellate median carina; and 4) keeled and more or less converging prozonal carinae.

The genus is close to Euparatettix  and Paratettix  (see above). In the typical representatives of mentioned genera, the tip of the fastigium is not protruding, but more or less rounded. Also, frontal horns are absent. In Paratettix  the median carina is absent in the frontal margin of pronotum. A similarity exists also with Lamellitettix  Hancock, 1904. The type species of the genus is Lamellitettix acutus  Hancock, 1904 stat. nov. Blackith (1988) synonymized L. acutus  and L. pluricarinatus  Hancock, 1909 with Lamellitettix insularis  ( Bolívar, 1887), and L. insularis  and L. fletcheri  Hancock, 1915 with Lamellitettix gallinaceus  ( Stål, 1877) without giving evidence for the synonymy ( Blackith 1992). Types of L. gallinaceus  were examined by the author in NHRS and those of L. pluricarinatus  in UMO. L. acutus  and L. pluricarinatus  are rather different from L. gallinaceus  by the form of the pronotum, but it remains uncertain whether L. acutus  and L. pluricarinatus  are separate species. Further studies of the type of L. acutus  and more specimens are needed. Lamellitettix  , with its genotype L. acutus  , is different from Lamellitettigodes  by the tip of the fastigium which is, in lateral view, not protuberant, by the lateral carinae that are curved in dorsal view forward towards the medial carina and are not parallel, and by the lateral lobes that are acutely pointed sidewards. A similarity exists also to Xistra  Bolívar, 1887 and Xistrella  Bolívar, 1909. In the typical representatives of Xistra  and Xistrella  , the antenna is inserted in a considerable distance below the ventral margin of the eye. In Lamellitettigodes  , the antenna is inserted as high as the ventral margin of the eye (Plate 5 Q–XView Plate 5). 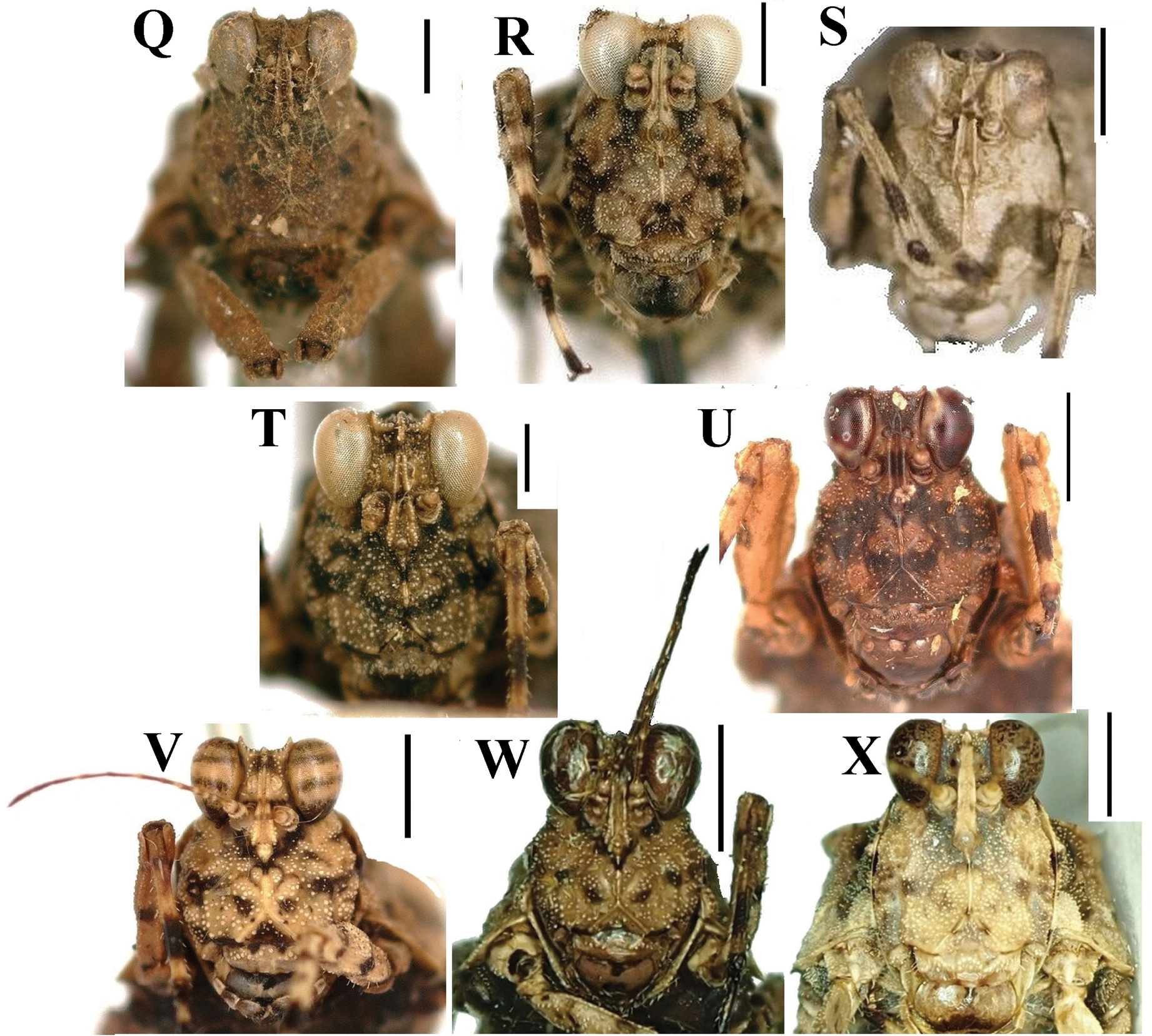