Diagnosis. A Rhinophis distinguished from R. dorsimaculatus , R. oxyrhynchus , R. porrectus , R. punctatus and R. zigzag by having fewer than 200 ventral scales, and from the first four of these species by its middorsally transversely rounded rostral (vs a distinctly crested/carinate rostral). The new species differs from R. blythii , R. erangavirajei , R. travancoricus and R. tricolorata by having more than 170 ventral scales. The Indian R. fergusonianus and R. sanguineus differ from R. lineatus in having much larger tail shields, and rostrals that separate the prefrontals along less than half their length. In addition, R. lineatus lacks the conspicuous (but low) carinae on the distal ends of the scales on the underside of the tail of R. sanguineus , and is less attenuate than the only known specimen of R. fergusonianus (midbody width in length ca. 30 – 40 vs 42). Rhnophis philippinus has a much larger tail shield (longer than the shielded part of the head) than R. lineatus . In common scalation characters, R. lineatus resembles R. drummondhayi and R. homolepis most closely, but it differs from both these species substantially in its colour pattern; regular, narrow, longitudinal pale/dark stripes around and along almost the entire body ( R. lineatus ) vs striped venter but unstriped dorsum with short pale and middorsally incomplete cross bars ( R. homolepis ) or mottled venter and dark dorsum with lateral/dorsolateral yellow, dorsally tapering bars ( R. drummondhayi ). Indeed, R. lineatus is the only species in the genus characterised by a colour pattern of multiple, narrow longitudinal stripes around and along most of the body, a feature occurring in all known specimens.

Variation. See Table 1 View TABLE 1 for meristic and morphometric details. Supra- and infralabials always as holotype except four infralabials on right of CAS 226043. Relative size and shape of dorsal shields of head somewhat variable; for example, frontal notably small relative to parietals and prefrontals in CAS 226026; rostral and frontal in contact in CAS 226028; second of four (from midline) scales contacting each parietal generally does so more briefly than in holotype, so that in some specimens (e.g. CAS 226026, 226028) each parietal superficially appears to contact only three non-head-shield scales. Mental generally narrowly separated from first ventral; very briefly in contact in CAS 226029, 226034. Ventrals 180 – 195; subcaudals 4 to 7 on each side, between one (always the posteriormost) and four of which are undivided/single. Left anal overlaps right only in CAS 225806, 226026, 226033, and WHT 5218. Dorsal scale rows always 19 anteriorly, 17 at midbody and immediately in front of anus (perhaps 16 rows here in CAS 226044); however, considerable variation in scale-row reductions although pattern seen in holotype seemingly average (see Appendix). Shield shape variable in posterior view; much wider ventrally than dorsally in CAS 226025, little wider ventrally than dorsally in CAS 226026, little wider dorsally than ventrally in CAS 226028 and 226044. Not all specimens were dissected to determine sex but available data do not indicate clear sexual size dimorphism ( Table 1 View TABLE 1 ). Males perhaps tend to have longer tails, but number of subcaudals is not a reliable indicator of sex.

Colour in life. A colour photograph presented by de Silva (1990: plate 1 f) depicts the species in life, identified as R. drummondhayi . The background body colour appears to be orange-brown, and the longitudinal stripes dark brown. The same photograph, also labeled as R. drummondhayi , appears on a 2001 poster “Snakes of Sri Lanka ” authored by de Silva, though here the background body colour appears a paler and less reddish brown.

Etymology. The species name is an allusion to the distinctive multiple longitudinal stripes. The specific epithet is considered a noun in apposition.

Distribution, natural history and conservation. Rhinophis lineatus is known only from the type locality, Harasbedda, in the Wet Zone of the central hills of Sri Lanka. As far as we are aware, all known specimens were collected from soils in agricultural habitats. Although the exact range of the species is unknown it is unlikely to be large (e.g. across a substantial part of the central hills) based on its absence in reasonably large collections of uropeltids from across the region ( BMNH, CAS, WHT). Given its small probable range and very few known localities (not known to include protected areas), R. lineatus is likely to fall into one of the IUCN’s threatened categories.

Based on reliable locality records and morphological and molecular analyses (e.g. Cadle et al., 1990; Bossuyt et al. 2004; unpublished data) Sri Lankan species of Uropeltidae do not occur in India or vice versa. Rhinophis lineatus is readily distinguished from the three congeneric Indian species. The new species also differs clearly from the non- Rhinophis Sri Lankan uropeltids that, although currently classified in other genera ( Pseudotyphlops , Uropeltis , e.g., McDiarmid et al., 1999), possibly form part of the Sri Lankan uropeltid radiation together with Sri Lankan Rhinophis ( Cadle et al., 1990; Bossuyt et al., 2004). Rhinophis lineatus differs (beyond in its distinctive colour pattern) from Pseudotyohlops philippinus and Uropeltis melanogaster in having more than 170 ventrals, and from U. phillipsi in having fewer than 197 ventrals. Additionally, compared with R. lineatus , P. philippinus has a substantially larger, almost flat tail shield, and U. melanogaster and U. phillipsi smaller, narrower tail shields that are shorter (vs longer) than the part of the head anterior to the frontal. Uropeltis ruhunae has keels rather than spines on its tail shield. 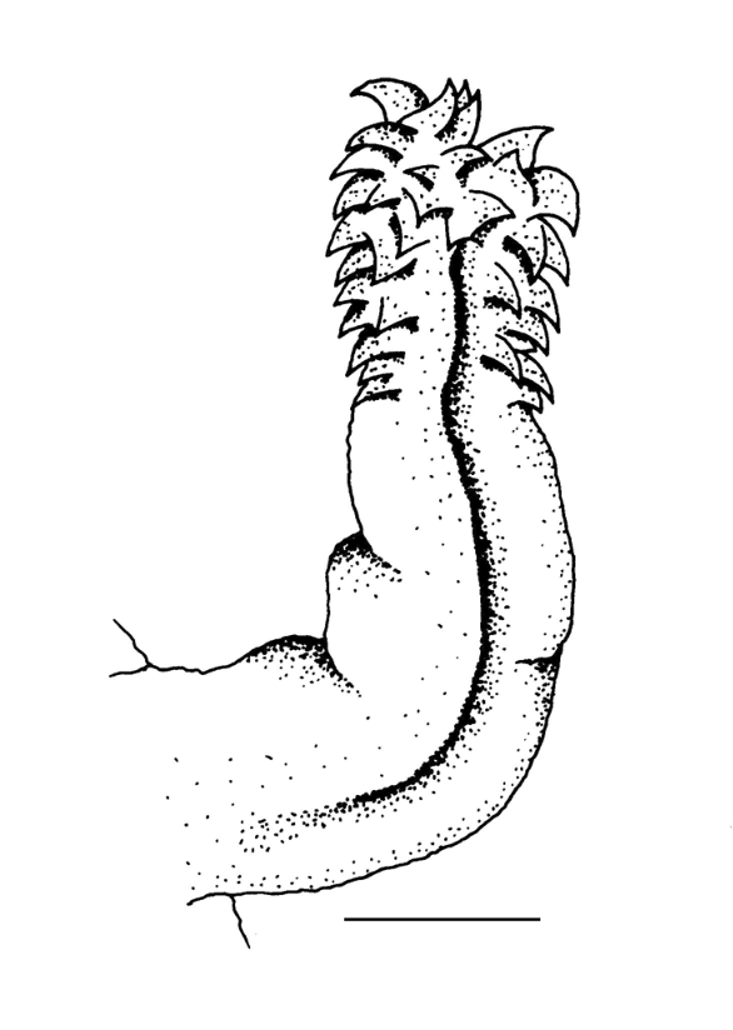