Chela and fingers inflated, fingers widely or moderately gaping in form I males and weakly gaping in form II males and females, usually without conspicuous tuft of setae along opposable base of fixed finger, although setation present in some younger or early intermolt individuals; lateral margin of propodus rounded and without costa, lacking impression at base of fixed finger; dorsal and ventral surfaces of fingers without longitudinal ridges. Opposable margins of fixed finger and dactyl with low, rounded tubercles; third or fourth tubercle from base of dactyl situated ventral to rest of tubercle row; distal end of fixed finger with tubercle ventral to tubercle row. Chela with single row of 8–10 (mode = 9, n = 21) strongly depressed tubercles along mesial margin of palm, barely evident in silhouette, distal tubercles usually absent and marked by punctation, without part of second row dorsolaterally. Palm of chela 1.4–1.6 (x = 1.5, n = 18, SD = 0.06) times as wide as deep and 1.0– 1.2 (x = 1.1, n = 18, SD = 0.05) times as wide as length of mesial margin of palm. Fixed finger and dactyl relatively short, dactyl 1.1–1.3 (x = 1.2, n = 18, SD = 0.06) times length of mesial margin of palm.

Hook on ischium of third pereopod of males, large and overreaching basioischial articulation in form I males, weakly developed and not overreaching articulation in form II males, hook opposed by small tubercle on basis. Coxa of fourth pereopod of males with caudomesial boss. Pleura of third through fifth abdominal segments with subangular or angular cephaloventral margin, angular posteroventrally, ventrally acute and rounded.

First pleopods of form I male (based on holotype) symmetrical and either contiguous or separated basally; distal half of appendage angled cephalically to proximal half at angle of about 27 degrees; both terminal elements moderately short but extending past greatest width of appendage; central projection corneous, bladelike, not tapering, recurved at about 130 degrees to distal portion of appendage, with distinct subapical notch directed caudoproximally; mesial process inflated, membranous, with acute fingerlike tip disposed at about right angle to shaft of appendage and slightly laterally; caudomesial face of pleopod angular, forming flattened, shelf-like area. First pleopod of form II male (based on morphotype) differs from that of form I male in the following respects: pleopods separated basally; central projection bulbous and not corneous, lacking subapical notch; juvenile suture present on basal third of appendage; caudomesial face of pleopod lacking flattened, shelf-like area.

First pleopods ( Fig. 12 View FIGURE 12 a, b) reaching coxae of third pereopods, symmetrical, and with gap between their bases. (See “Diagnosis” for description.)

Mesial margin of palm occupying 41.0% of its length and bearingsingle row of 9 low elevations, distal tubercles marked only by punctations. Fingers weakly gaping; opposable margin of dactyl with row of 9 tubercles. Ventrolateral row of merus of cheliped represented by 1 small corneous tubercle and ventromesial row consisting of 4 minute tubercles. Ventromesial margin of ischium without tubercles. Hook on ischium of third pereopod short, not overreaching basioischial articulation, opposed by tubercle on basis. Coxa of fourth pereopod with weakly developed caudomesial boss.

Types. The holotype, allotype, and morphotype (38531, 38532, and 38533, respectively) are deposited in the crustacean collection at the Carnegie Museum of Natural History ( CMNH), as is the paratypic series, comprising collections 1–2 listed below.

Range and specimens examined. This crayfish is known only from the type locality ( Fig. 11 View FIGURE 11 ) and the material examined comprises 24 specimens: ALABAMA. Madison County: (1) Type-locality, Mountain Fork at Old Mountain Fork Road, 2.6 air km northeast of New Market, CMNH 38534, 8♂ I, 2 ♂ II, 5 Apr. 2006, DRJ; CMNH 38535, 11♂ I, 3 ♀, 22 Oct. 2007, DRJ, GAS. Mountain Fork is a major tributary of the Flint River in Alabama. Intense effort was made in the Market Fork, Flint River, and adjacent drainages to collect specimens of this species at other localities. Although we found similar habitat in these drainages we unable to collect it anywhere other than at the type locality.

Variations. Given that this species is known from only one locality, it was not surprising that no significant variation existed in the available specimens, however, in some specimens structure and orientation of the annulus ventralis was a mirror image of the description in the diagnosis.

Ecological notes. At the type locality, this crayfish was collected only from boulder/cobble habitat within the riffle and swift run just downstream from Old Mountain Fork Road crossing. It was not collected in the deeper channelized section further downstream, where O. validus ( Faxon, 1914) was the only crayfish collected.

Relationships. Morphologically this crayfish has affinities with C. longirostris and C. andersoni . It differs from both of these species in possessing ventrally angular and acute abdominal pleura and shorter dactylus length. It differs from C. longirostris in having chelae with narrow gape width and longer and wider palms. C. diupalma differs from C. andersoni in having chelae with a longer mesial palm length, possessing a shoulder on the caudomesial face of the form I male gonopod, and in lacking a ventral rostral spine. This crayfish also appears to belong to Hobbs’ (1981) group of more derived Hiaticambarus species.

Crayfish associates. This crayfish has been collected with C. (D.) graysoni and O. (G.) validus .

Conservation status. Using the methodology of Taylor et al. (2007), the following conservation status rankings are given for this crayfish: E (Endangered), American Fisheries Society status; G 1, global heritage ranking; and S 1, state heritage rankings for Alabama and Tennessee. Criteria for these listings are restricted range and the potential for the destruction, modification, of reduction of this species’ habitat and range.

Etymology. The specific epithet is a combination of the Latin words diu, meaning long, and palma, meaning palm, in reference to the long palms of the chelae observed in the species.

Suggested Vernacular Name. The suggested vernacular name for this crayfish is the Mountain Fork Crayfish, in reference to the sole locality and stream from which it is known. 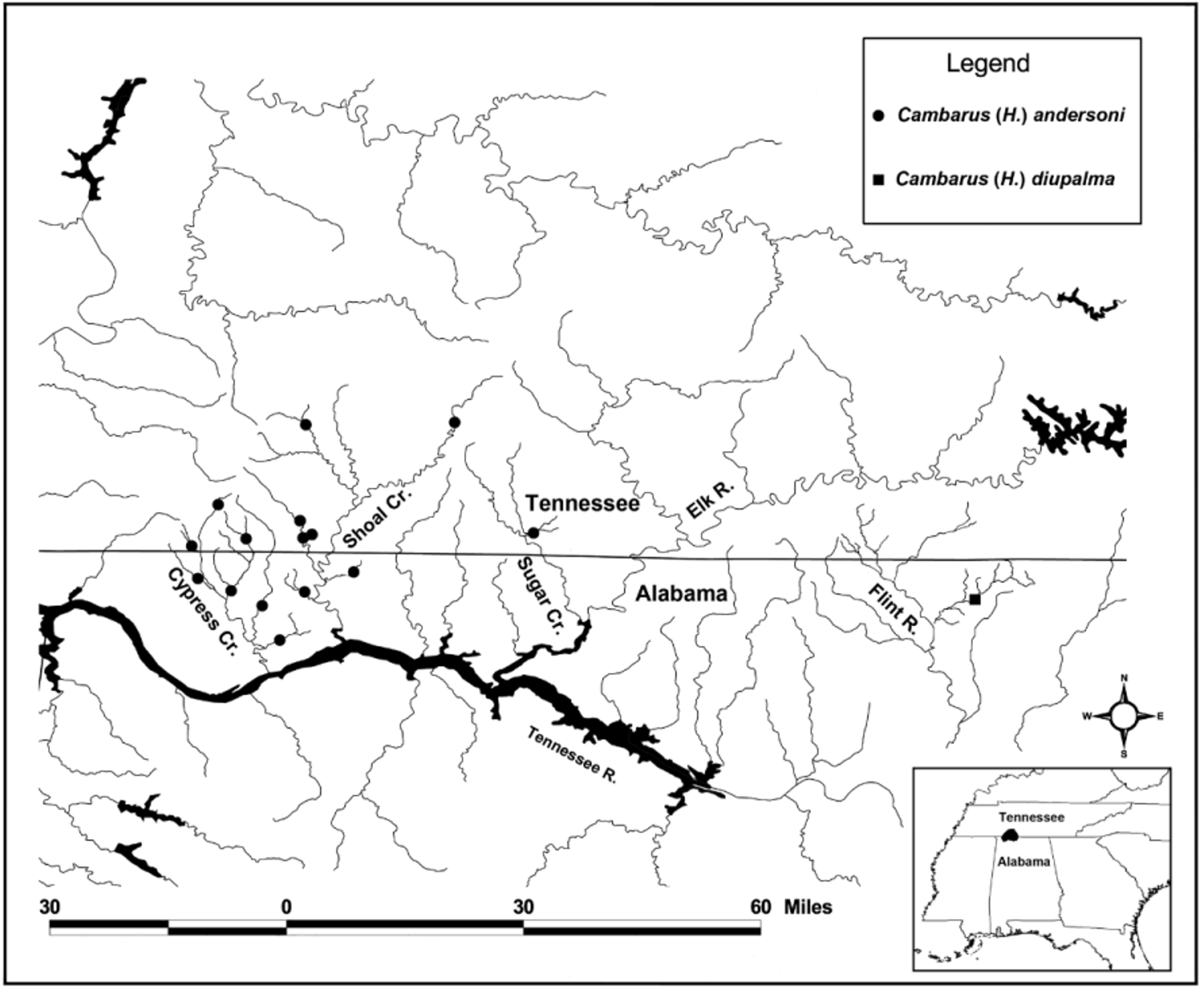 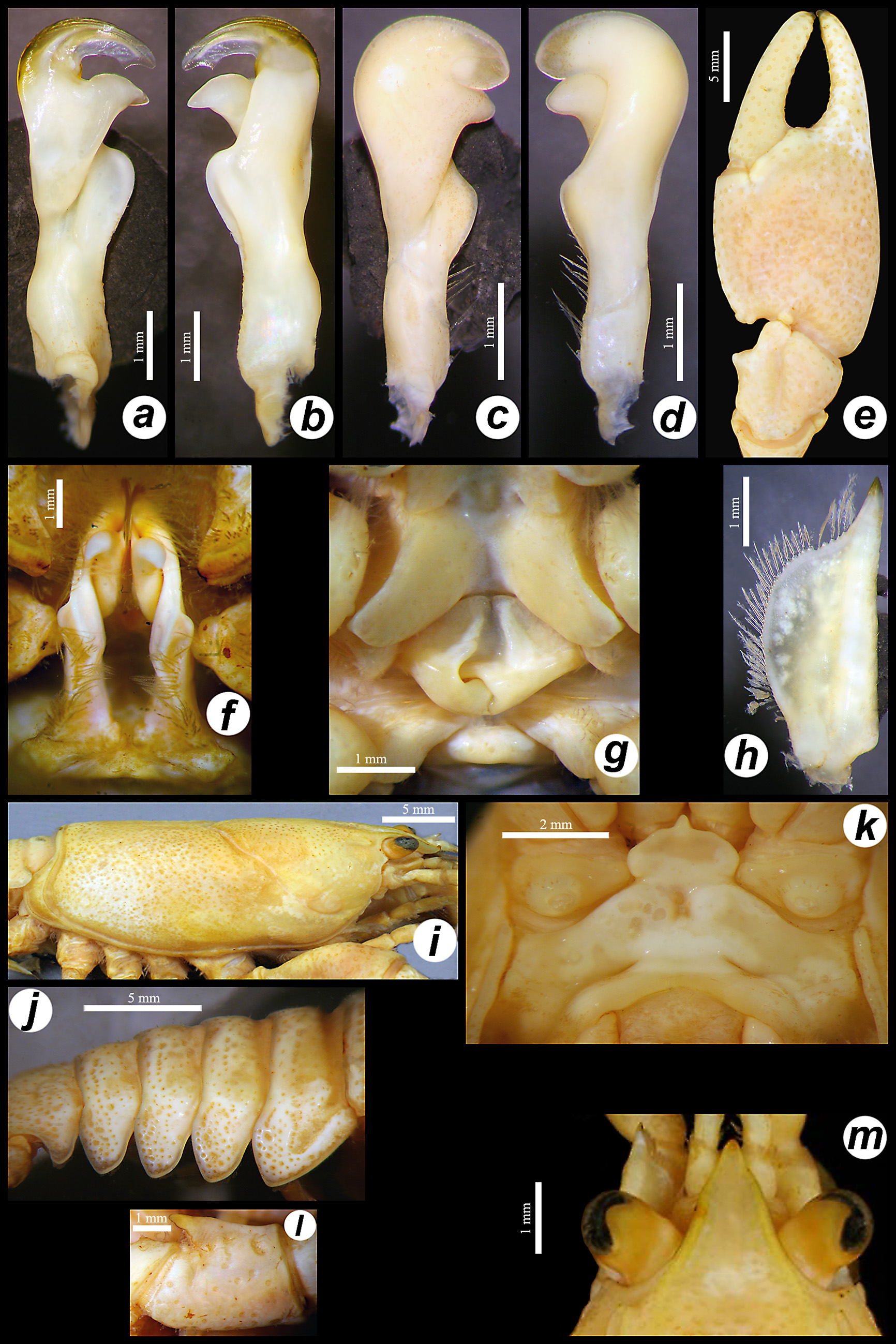 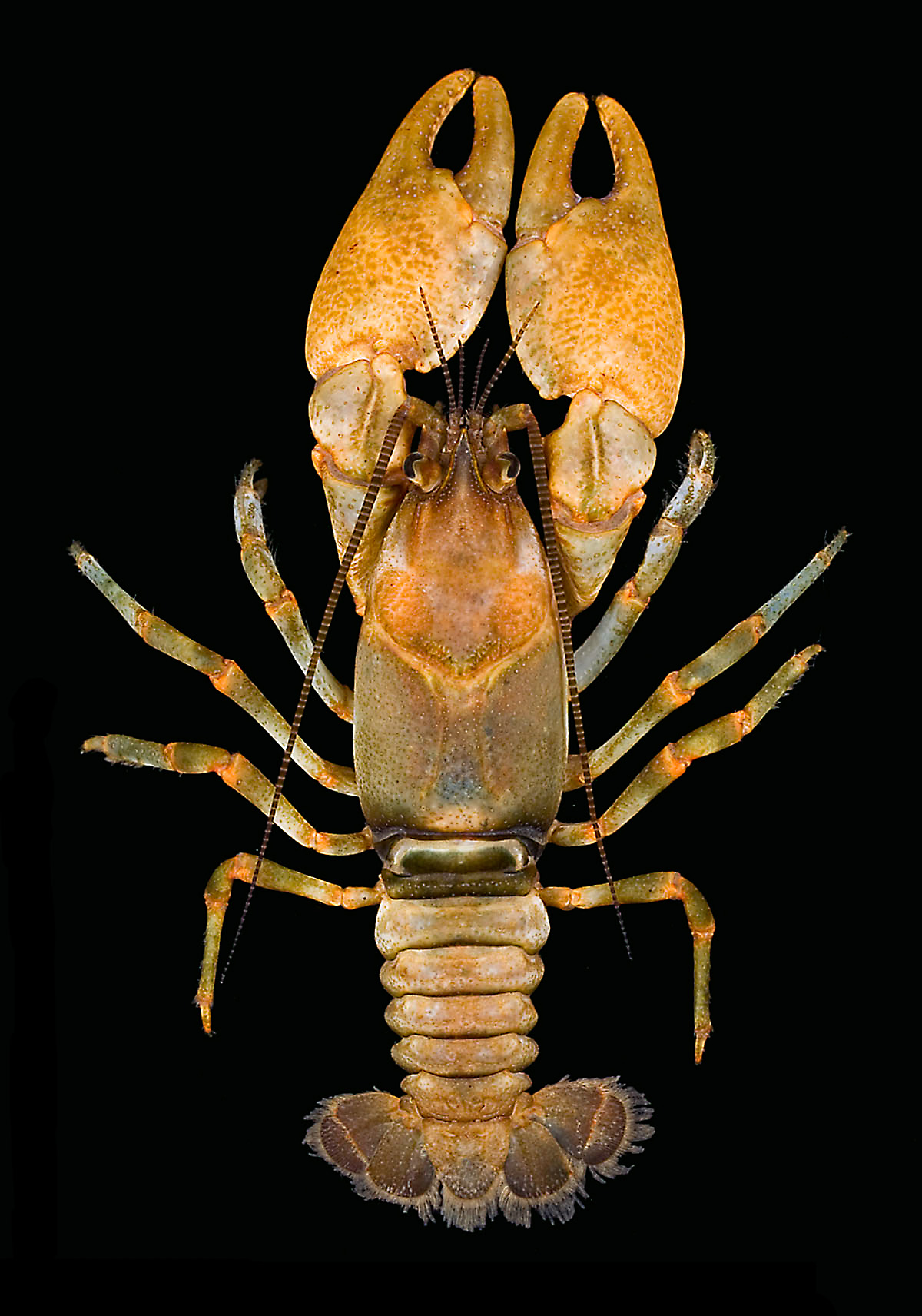