Diagnosis. Workers of Odontomachus desertorum  can be separated from the introduced species O. haematodus  and O. ruginodis  by the smooth, mostly unsculptured petiole (striate in O. haematodus  and O. ruginodis  ); from O. brunneus  by coarse and somewhat sparse gastral pubescence (densely pubescent in O. brunneus  ); and from O. relictus  by the smooth basilar lobes (striate in O. relictus  ). Additionally, O. desertorum  can be separated from these species by geography as it is restricted to the Sonoran Desert region of the southwestern US and northwestern Mexico; whereas, all of the aforementioned species are only known to occur east of the Mississippi River in the US. Workers of O. desertorum  are most similar to those of O. clarus  (also a western species), with workers of both species being similar in coloration, having coarse gastric pubescence and a smooth petiole and basalar lobe, but may be differentiated from O. clarus  by the much larger size (WL 3.41– 3.57 compared to WL 2.43–2.83 for O. clarus  ), stout, poorly differentiated dorsomedian petiolar spine ( Fig. 6View FIGURE 6 C) (may be nublike or well differentiated in O. clarus  ), the entirely striate propleurae ( Fig. 6View FIGURE 6 A), pronotal cervical lobes which are wider than long, and by the relatively longer scapes (SL/HW = 1.11–1.15 vs. 0.99–1.07). Males are uniquely identifiable among US species by the following character combination: 1) generally large size (WL 2.61–3.06); 2) ocelli relatively large and bulging beyond posterior border of head; 3) body light golden brown and appendages honey yellow; 4) propodeum finely striate; and 5) petiolar sternum posteriorly glabrous and with a distinct angular process near the posterior margin. The genitalia of O. desertorum  are most similar to O. clarus  from which they differ mainly by the narrower posterior ninth sternal lobe ( Fig. 24View FIGURE 24 C), the less strongly-sclerotized digitus, and by the longer, slightly upturned, anteroventral valviceps process with rounded apex ( Fig. 25View FIGURE 25 I).

Discussion. Odontomachus desertorum  is restricted to the Sonoran Desert; its range in Arizona is surrounded by that of O. clarus  to the north, east, and south. When first described as a subspecies of O. haematodus  (“ haematoda  ) by Wheeler (1915), the coloration and petiolar node form were used to characterize the taxon, a character set scarcely improved by M.R. Smith (1939) who noted the larger size and well-developed lateral ocellar pits of O. desertorum  . Creighton (1950) repeated this diagnosis in his derivative key to the North American Odontomachus  . Brown (1976) synonymized O. haematodus desertorum  with O. clarus  , but unfortunately did not provide support for this action. Based on the discovery and examination of the male of O. desertorum  and a reassessment of worker variation for names attributable to O. clarus  , it is here determined that O. desertorum  should be revived from synonymy and elevated to species. While no sympatric material of O. desertorum  and O. clarus  were examined during this study, M.R. Smith (1939) indicated that the two species may occur within a few miles of one another, supporting recognition of O. desertorum  as a valid species.

New worker-based characters for separating O. desertorum  from O. clarus  are the former’s longer antennal scapes (see diagnosis), shorter cervical pronotal lobe (which contacts the occiput when the head is reflexed), and entirely or almost entirely striate propleurae (which forms the longitudinally divided area beneath the pronotum and above the procoxae, and is technically the proepisterna) ( Fig. 6View FIGURE 6 A). The male of O. desertorum  is conspicuously different from that of O. clarus  in terms of coloration and with respect to the petiolar sternum, which is strongly angled in O. desertorum  ( Fig. 10View FIGURE 10 A) and nearly flat in O. clarus  ( Fig. 10View FIGURE 10 B). Genitalic differences between the two species are indicated in the diagnosis above. The ocelli of male O. desertorum  are also slightly larger than O. clarus  ; this may reflect a more light-restricted flight timing or perhaps size-based allometry. Until further males are collected and phenological data are recorded and collated, it is too early to infer temporal isolation of diel flight times between the two species. Beyond worker and male morphology, little is known about the biology of O. desertorum  . Whereas O. clarus  is usually collected in woodland habitats, O. desertorum  seems to prefer open desert/desert-scrub habitats. Smith (1939) noted that O. desertorum  may be common but infrequently collected due to nocturnal or matinal foraging times. Material provided by Stefan Cover ( MCZ) suggest that this may indeed be true, as the label data indicate that the workers were collected while “nocturnal[ly] foraging. 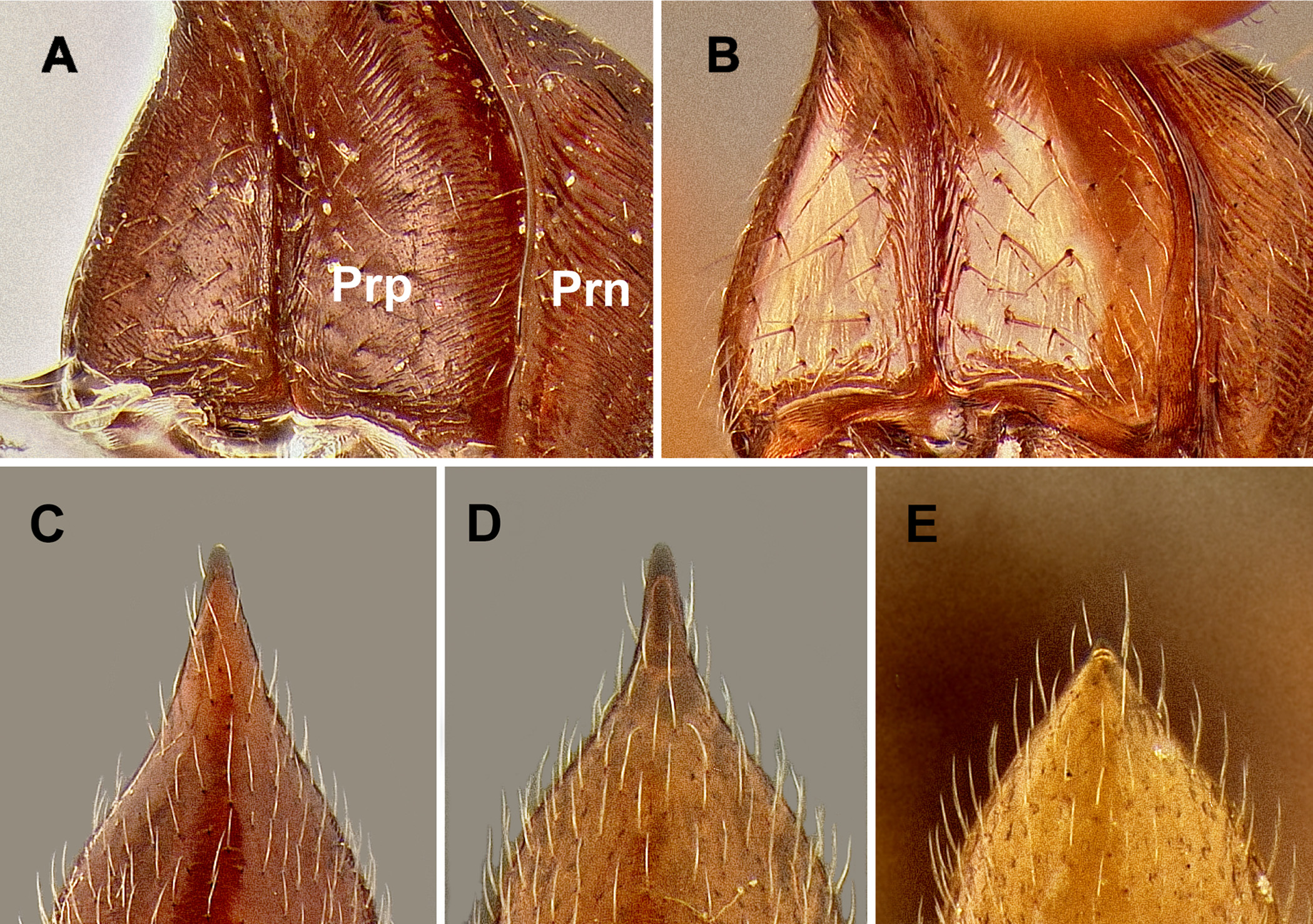 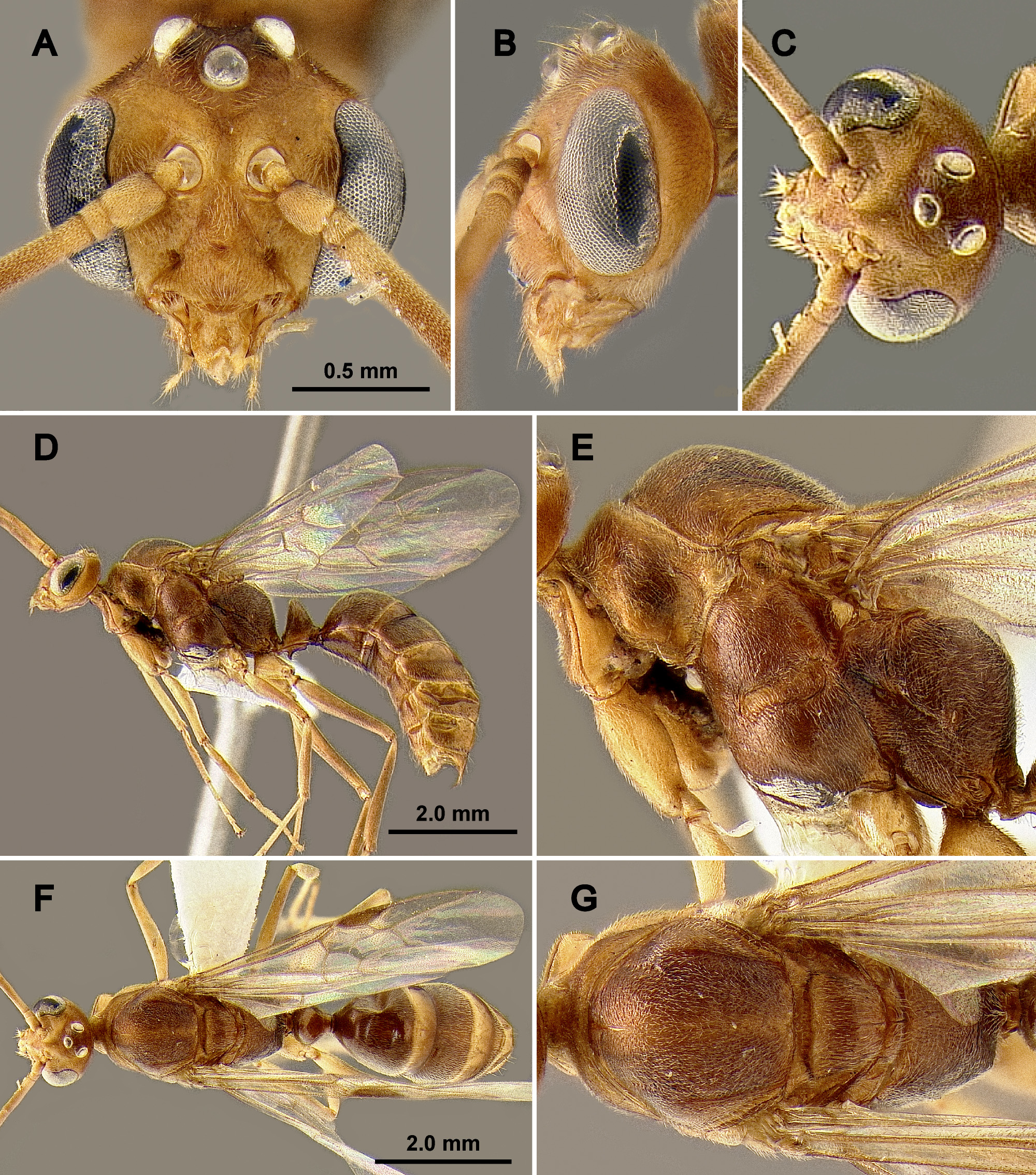