Etymology. The specific epithet is a toponym of Tierra del Fuego, from which the specimens came.

Thoracic appendages typical of the genus.

Endopodite and exopodite length ratio (without setae) is approximately 2.5 in the first thoracopod, varies from 2.0 to 1.7 in the 2 nd to the 7 th thoracopod, and diminishes from 1.6 to 1.4 in the 9 th and 10 th thoracopod. In the 11 th thoracopod the exopodite is slightly longer than the endopodite.

Thoracopod 1 endopodite lower margin proximal half with plumose setae and middle of the distal half with only one half-plumose, half-pectinate seta; more distally, close to the apex of endopodite are two shorter robust pectinate setae. Thoracopods 2 through 10 endopodite lower margin with proximally plumose setae advancing more distally as the appendage series progresses; distally in the margin, with 2–3 widely spaced pectinate setae, decreasing in size and increasing in robustness to apex, and restricted to a progressively shorter margin portion in successive pairs. Thoracopods 1 and 2 endopodite apex with two or three bipectinate uniformly curved or sinuous setae bearing short setules ( Figs 2 View FIGURE 2 L, 2 N a, b); these setae are similar shaped though slightly longer than the setae of the endopodite medial margin, which are more spaced than the apical ones. Thoracopods 3 through 10 endopodites with an apical tuft of close set robust bipectinate curved setae similar to those present in thoracopods 1 and 2 apex. Also, the setae along the endopodite medial margin are similar in shape and spacing to the setae in the thoracopods 1 and 2 but smaller and more gracile, almost half the length of the setae of the apical tuft, seeming denticles with short lateral setules ( Fig. 2 View FIGURE 2 M); as consequence, the tuft of scratching setae of the apex seems more conspicuous. In thoracopods 1 through 10, all over the medial margin, from its distal to its proximal part, the curved setae gradually become straight and at the same time sinuous in their tip, whereas in the proximal part of the margin the setae are curved in the opposite direction of the distal setae; the setae are almost uniform in length along the margin. From thoracopod 7 trough 10, a group of setae in the lower and the medial margins are sub-marginally inserted ( Figs 2 View FIGURE 2 G –J; arrows in Fig. 2 View FIGURE 2 M); maybe, this arrangement is related with the folding of the endopodites and could allow the setae to change their attack angle.

In the 11 th pair of thoracic appendages, the lower margin of endopodite is only provided with plumose setae. Apex of the lobe widely rounded; the setae bordering it are thin, bipectinate, and slightly curved. Towards the medial margin, in distal to proximal direction, the setae decrease in size; they are bipectinate and gradually become straight and then curved in inverted-direction.

Genital segments not much prominent in lateral view. Gonopods (according to Rogers et al. 2007), typical of the genus ( Fig. 2 View FIGURE 2 O a, b). Non-eversible part with a sclerotized, curved and sharp spur-like process. Eversible part, with the two dentate warts typical of the genus; in one male, in the middle of this part, one gonopod of the pair also showed a couple of small triangular and flattened evaginations ending in a hyaline sinuous tip; these structures have been interpreted like anomalies. Testes extending 2 or 3 segments behind the genital segments.

Joint between the two last abdominal segments, not well defined. Uropods not convergent, uniformly provided with plumose setae all over the margin.

Mouth parts as in the male. Maxillae 1 with 21 long setae plus a short strong spine on limb ventral tip, base as wide as twice long seta width. Maxillae 2 with 6 plumose distal setae plus 1–2 anteriorly directed densely plumose setae, with setules all around.

Thoracic appendages uniform in type and arrangement of setae bordering the lobes. Endopodite not lengthened as in the male, sub-rectangular in thoracopods 1 st through 5 th, sub-oval in pairs 6 th to 11 th; without cuticular reinforcement along the medial margin. First through 10 th thoracopods endopodite lower margin with plumose setae, and distally 2 to 4 long pectinate ones. Distal medial endopodite margin with curved pectinate setae smaller than those of distal lower margin, decreasing slowly in size and becoming straight bipectinate towards proximal medial margin. Thoracopod 11 th lower margin, with plumose setae all along. Rounded apex and medial margin with straight and bipectinate setae, gradually decreasing in size proximally.

First thoracic segment bearing a pair of lateral roughed auriculate evaginations just posterior to maxillary gland, and a pair of small dorsal and conical spiny mounds with the apex posteriorly directed ( Fig. 3 View FIGURE 3 A), which initiates a row of dorsal similarly shaped mounds, that extends up to 11 th thoracic segment. The 2 nd pair of mounds is the most prominent of the series; the remaining pairs slightly decreasing in size posteriorly. Both mounds of each pair are very close in the dorsal middline.

Brood pouch fusiform ( Fig. 3 View FIGURE 3 B), dorsally more convex than ventrally, forming an angle of 30 ° with the longitudinal axis of the body and extending to the 3 rd – 5 th post-genital segments. The lips at the apex are the dorsal almost twice the length of the ventral one. Oviducts wide, fitting up to 3 oocytes in its width. Ovaries extending at most to the 8 th thoracic segment forwards and to the 4 th post-genital segment backwards. Cyst diameter 299–403 µm.

Joint between the last two abdominal segments not well defined. Uropods as in the male.

However, B. fueguina nov. sp. differs from these species by the presence of a longitudinal medial crest, produced medially into a strong blunt point, and gradually declining distally; the crest and point are provided with small sparse sensory setae. B. belki has a medial distinctive prominent outgrowth with 2-3 spiny protuberances ( Maeda-Martínez et al. 1992); B. packardi and B. mexicana present a peg like squamate appendix, more extended distally and with transverse clefts in B. mexicana ( Maeda-Martínez et al. 1993).

The morphology of the male antenna 2 distal article in B. fueguina   nov. sp. is the main morphological trait that distinguishes the species from other branchinectids, because of its peculiar articulation, its remarkable triangular and strikingly flattened shape and its tip. Distally, the broadened article bends anteriorly forming an extended and complicate three-lobed tip (base of triangle), with the inner (medial) lobe divided into two rounded lobes. On the other hand, in B. belki   the apex is bifurcated, with a dorsal acute and a ventral round projections ( Maeda-Martínez et al. 1992); in B packardi   the tip of the article tapers a little, its anterior half turning inward in a medially projecting spur and its posterior half, short, not turning medially ( Lynch 1964); in B. mexicana   , the apex of the article is not notably inflexed ( Maeda-Martínez et al. 1993).

Like in the majority of species of the genus, B. fueguina   nov. sp. shows a marked sexual dimorphism particularly evident in the thoracic appendage setose armature (arrangement and shape of setae) and in the endopodite shape. In the male, the distally extended triangular endopodites of the 10 former thoracopods of the series bear a cuticular reinforcement along the medial margin lacking in the shorter sub-rectangular to suboval endopodites of the female. This structure is also observed in the male endopodites of other Branchinecta   , bearing distally extended endopodites ( Cohen 1993, 1995), such as B. iheringii Lilljeborg, 1889   , B. palustris Birabén, 1946   , B. rocaensis Cohen, 1982   , and B. valchetana   .

The articulation between the two last abdominal segments, in both sexes, is not well defined in B. fueguina   as it occurs in other branchinectids like B. valchetana   and B. prima   ( Cohen 1981, 1983).

The dorsal row of conical spiny mounds along the female 1 st to 11 th thoracic segments, may be of relative taxonomical value. It is worth noting that even though several authors have stressed the usefulness of the trait as a specific character in the genus ( Linder 1941; Lynch 1958, 1972; Cohen 1981, 1985, 1987, 1992, 1993; Rogers 2002), they have also pointed out the great variability of the female trunk armature among populations and according to the size of specimens within each population. 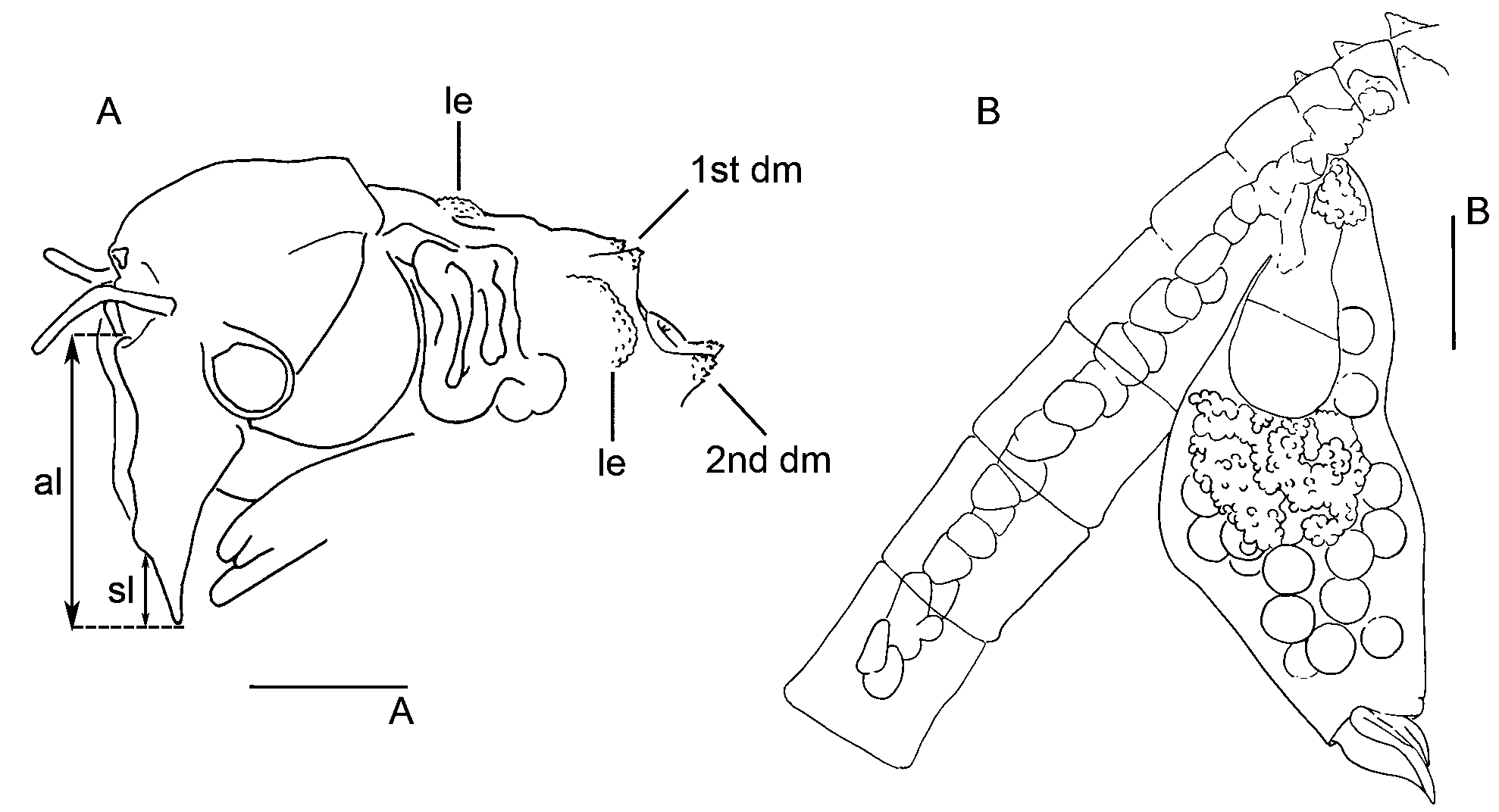