Etymology. The name of the species makes reference to the country of origin, China.

Diagnosis and discussion. The genus Conilia  was established by Gerlach in 1956 with the type species Conilia divina Gerlach (Gerlach 1954)  . It belongs to Ironidae  with a cuticularized elongate-tubular buccal cavity and three claw-like teeth at anterior end of buccal cavity. It is a rare genus, with only two species described to date, and some diagnostic characters are still questionable ( Gerlach & Riemann 1974, Aryuthaka 1989, Platonova & Mokievsky 1994, Electronic database: http://nemys.ugent.be; http://www.marinespecies.org/index.php). In general, it can be distinguished from other genera of Ironidae  by male copulatory apparatus. According to the original descriptions of this genus and the type species C. divina  , the male copulatory apparatus consists of three parts: the first part is short and paired, its proximal end expands to a funnel shape and distal end bends as two stout hooks; the second part is a narrow strip, longer than the first part; the third part is a very long obliquely striate sclerotized tube, which adjoins the first part and the second part ( Gerlach 1954). A structure similar to the third part was first found in Mesacanthion diplechma ( Southern, 1914) Filipjev, 1927  , which was described as a spicule ( Southern 1914); Schuurmans Stekhoven (1935) suspected that it might act as the ejaculatory duct. Gerlach (1954) regarded these three parts as spicules, gubernaculum and spicular accessory, respectively. Aryuthaka (1989) considered the third part to be a tubiform spicule and the first part to be the gubernaculum. Keppner & Tarjan (1989) regarded the first part and second part as asymmetrical spicules of different length (see also Platonova & Mokievsky 1994). In C. divina  , the third part of the copulatory apparatus may protrude up to two-thirds of its length from the cloaca ( Gerlach 1954). In Conilia sinensis  sp. nov., the third part of the copulatory apparatus may also protrude from the cloaca ( Figure 1View FIGURE 1 D; Figure 2View FIGURE 2 G), while the second part was never observed to protrude in all of our specimens. The former is more likely to act as the ejaculatory duct, so we describe the single striate sclerotized tube as a spicule and the short and paired structures as telamons in this paper. A pictorial key including C. divina  , C. monospiculata Aryuthaka, 1989  and the newly described species is given in Figure 3View FIGURE 3. 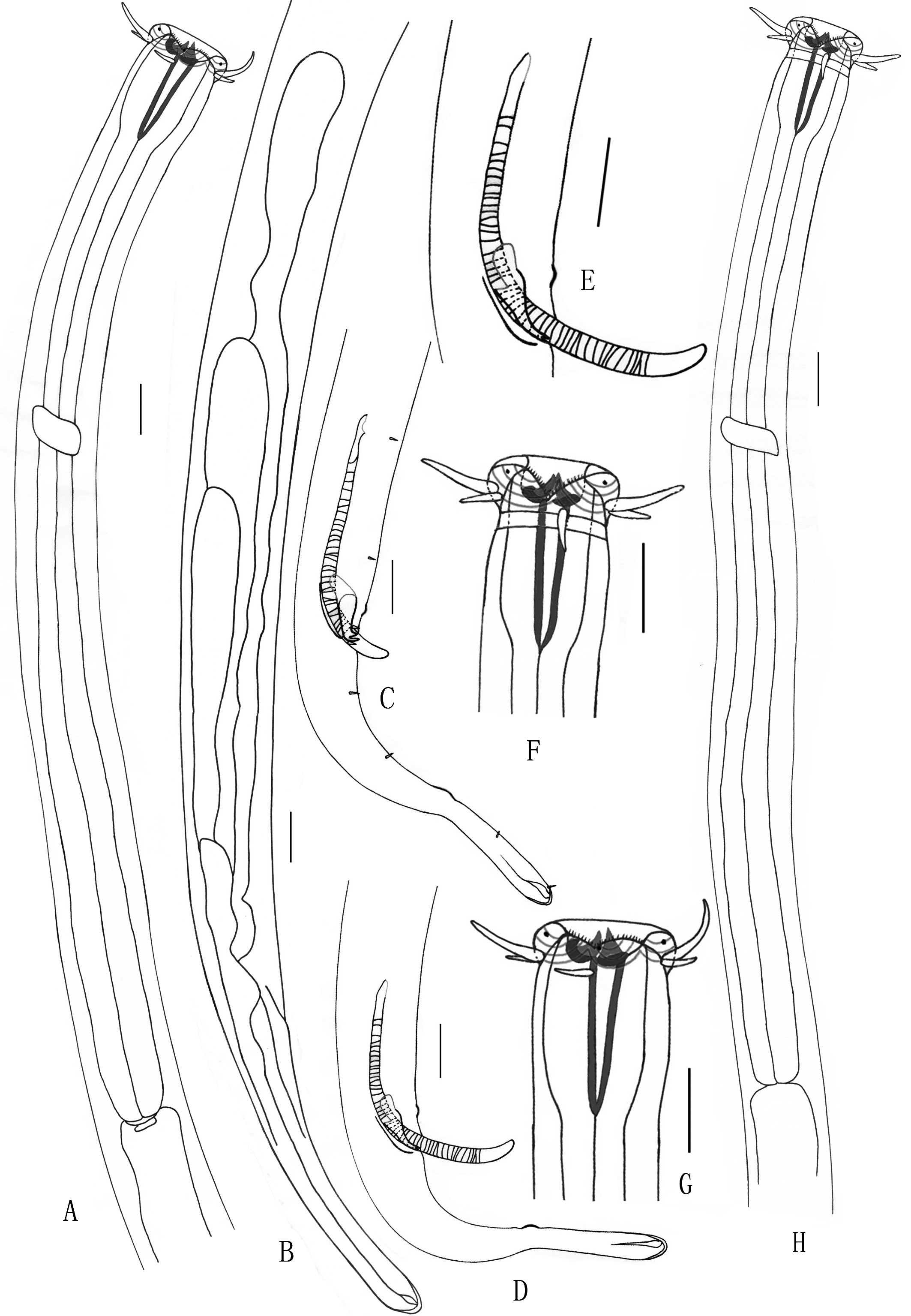 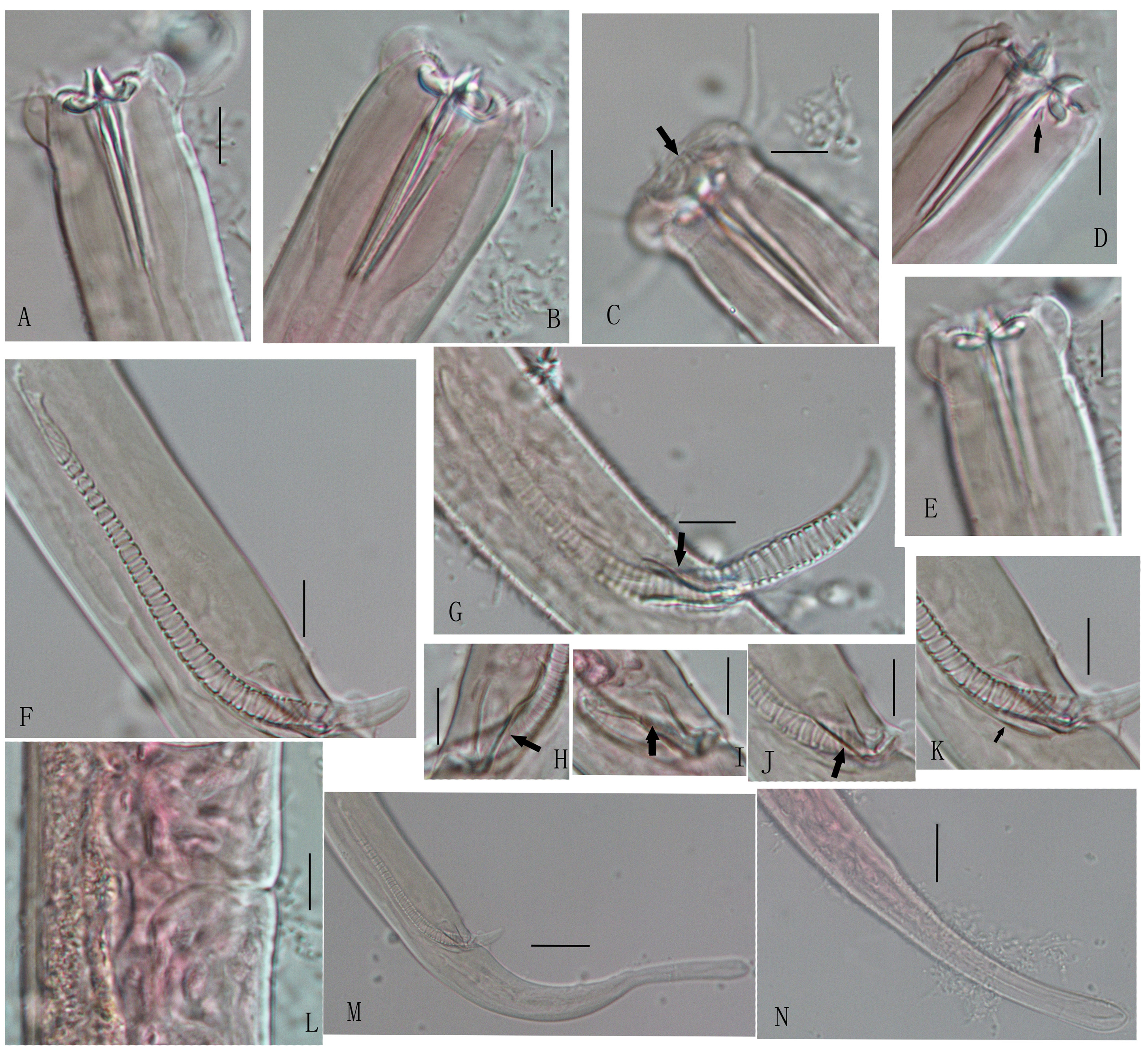 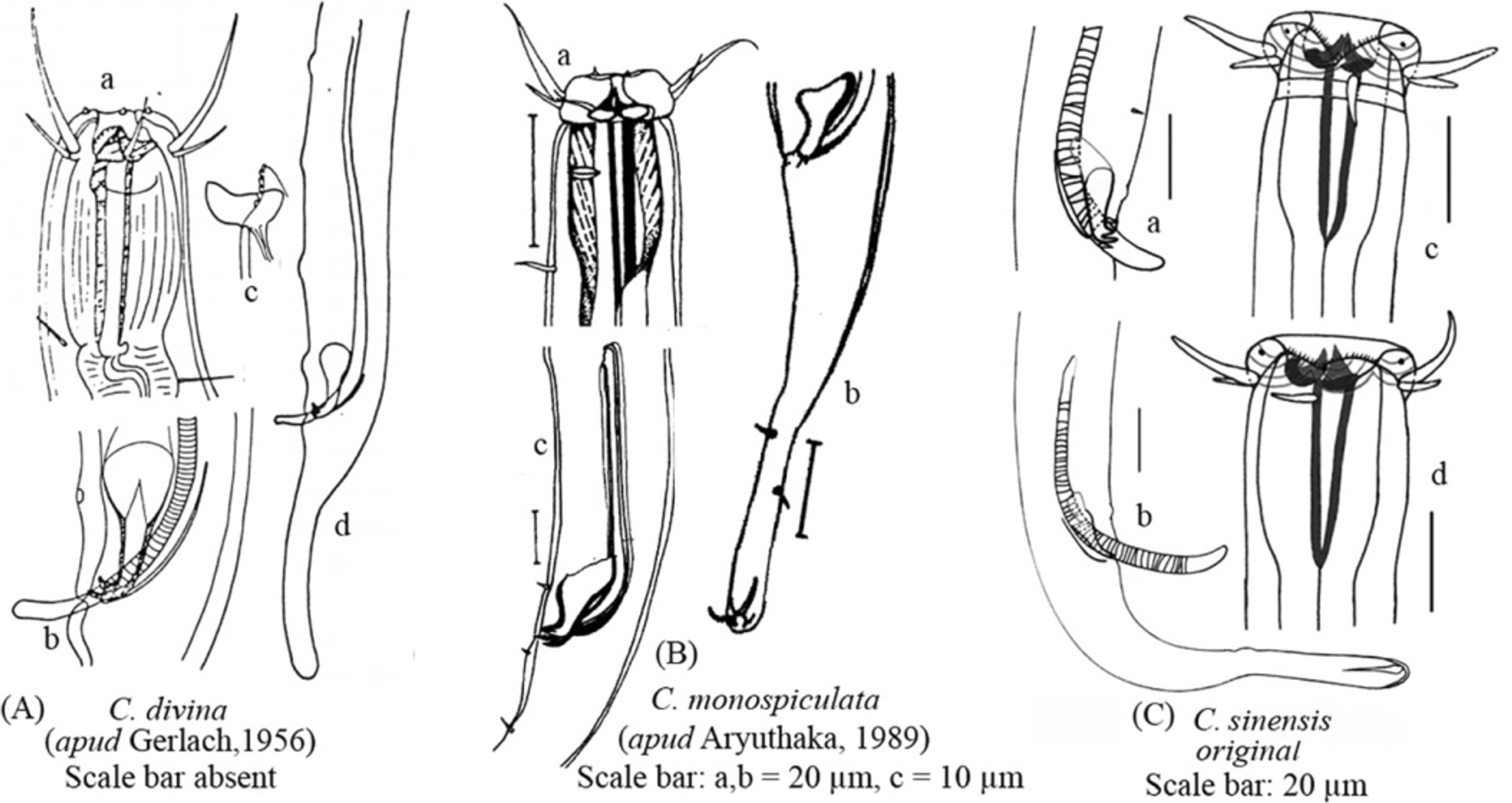