Etymology. This species is named for the type locality: intertidal sediments from the East China Sea.

Description. Specimens from Station XMHC Male. Body tapering acutely at posterior extremity. Cuticle smooth and thick, with several small scattered conical papillae which are sometimes associated with more or less marked elevations of the cuticle. Head distinctly set off from the remainder of the body by a deep groove. Head sensilla papilliform, in two circles of 6 + (6 + 4). Inner labial sensilla small; six outer labial sensilla and four cephalic sensilla in a circle, stout and blunt, situated at the base of head region, outer labial sensilla are slightly larger than cephalic sensilla. Amphids pocket-shaped, about 0.59–0.62 cbd and with anterior edges lying exactly on the posterior edge of the cephalic groove. Buccal cavity divided into an anterior cup-shaped section and a posterior strongly cuticularized tubular section, length 5–8 µm and 55–56 µm respectively. The inner wall of the cup-shaped section armed with rows of minute denticles. Two smaller dorsal and two larger subventral solid curved teeth present at the margin of the anterior cup-shaped section and the posterior tubular section. Pharynx about 0.16 times of body length, slightly swelling in stomatal region and gradually enlarging posteriorly, corresponding body diameter 52–55 µm at posterior extremity. Сardia bluntly conical, surrounded by intestinal tissue. Excretory pore opening at the labial region between the labial papillae and the cephalic sensilla. Ventral gland lies posterior to the pharynx. Tail tapers to a sharp point, without caudal glands and with a series of three pairs of symmetrical or asymmetrical small conical papillae in two rows distributed in the postcloacal subventral sector. There are also two rows of asymmetrical small conical papillae present on the precloacal subventral sector, each row containing 8–9 papillae. All of the small conical pre- and post-cloacal papillae are associated with more or less marked elevations of the cuticle.

Reproductive system didelphic, ovaries opposed and reflexed, located at right side of intestine. Vulva situated at about 60.1 % of body length.

Diagnosis and discussion. The genus Pheronous  was set up by Inglis in 1966 with the type species Pheronous ogdeni  . It differs from other genera of Ironidae  by the papilliform head sensilla; the pointed tail and the absence of caudal glands, ect. ( Inglis 1966; Platt & Warwick 1983). So far, only one species has been described in this genus ( Gerlach & Riemann 1974, Electronic database: http://www.marinespecies.org/index.php; http://nemys.ugent.be;). A pictorial key including P. ogdeni  and the newly described species is given in Figure 6.

Pheronous donghaiensis  sp. nov. is characterized by the combination of the following characters: tail tapers to a sharp point; caudal glands absent; in the male the tail bears two rows of small conical papillae which are associated with more or less marked elevations of the cuticle; buccal cavity armed with four large solid teeth and rows of minute denticles. It can be distinguished from P. ogdeni  , the sole other species of Pheronous  by body size; the number, shape and arrangement of subventral precloacal papillae (asymmetrical vs. paired); the shape of spicule (stout, with central septum at proximal end vs. stout and clumsy, sometimes appears to present a dorsal strengthened rib) ( Inglis 1966). 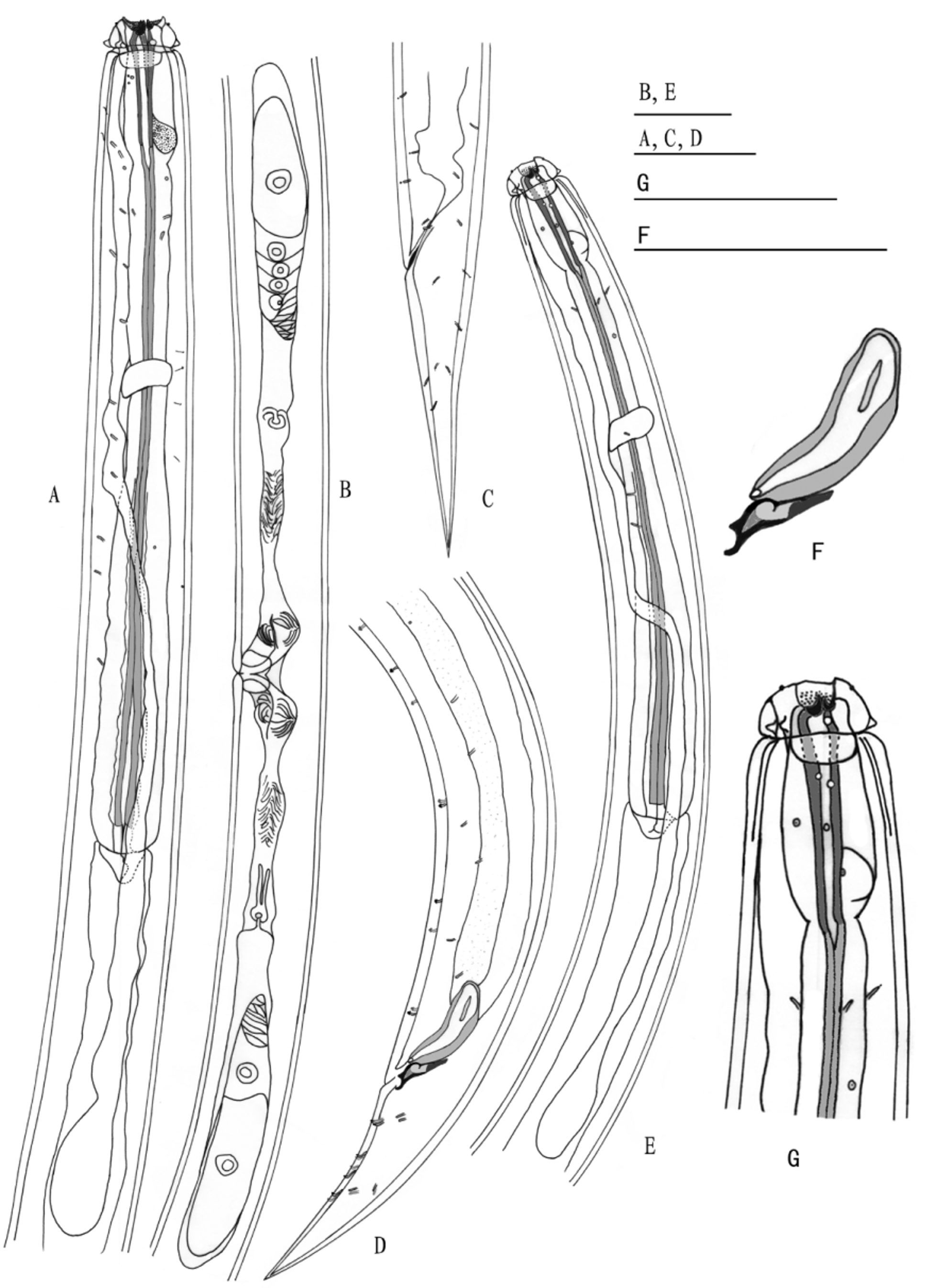 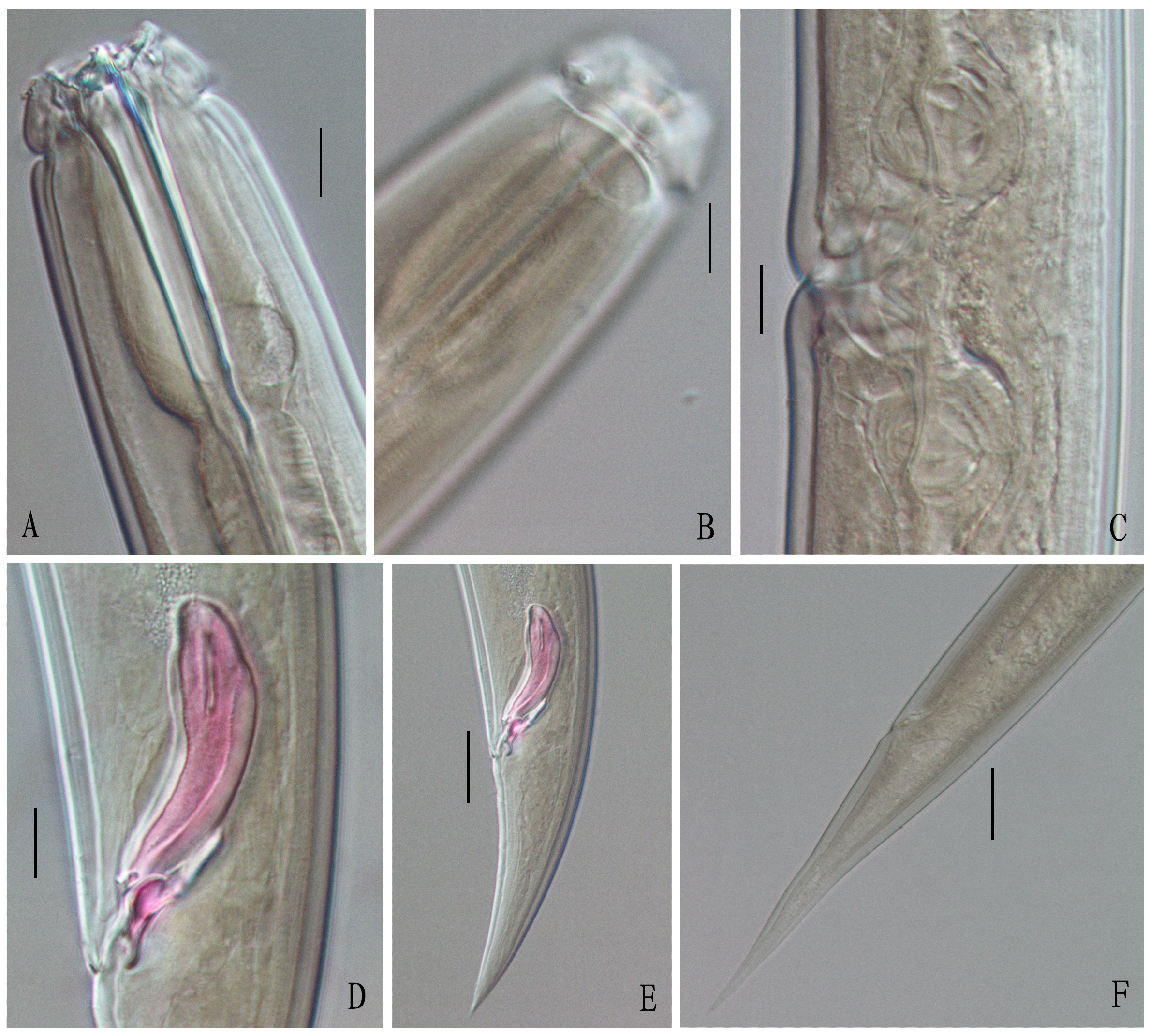