Anacampsis psoraliella  also differs from A. wikeri  in larval foodplant preference. So far as is known, the larva of A. psoraliella  feeds only on plants that formerly were assigned to the genus Psoralea  . Specimens of A. psoraliella  in the collection of the USNM were reared in Iowa from silverleaf Indian breadroot, Pediomelum argophyllum (Pursh) J. Grimes  (labeled as Psoralea argophylla  ), in Nebraska from slimflower scurfpea, Psoralidium tenuiflorum (Pursh) Rydberg  (labeled as Psoralea tenuiflora  ), and in Arkansas from Sampson's snakeroot, Orbexilum pedunculatum (P. Miller) Rydberg  (labeled as Psoralea psoralioides  ). Emergence dates of these moths are concentrated in the period extending from mid-June through early July, which is slightly later than for A. wikeri  in central Illinois. Psoralidium tenuiflorum  is common at a number of the Illinois prairies that we surveyed for microlepidoptera (these sites lying along a 240 -km, northeast-to-southwest line extending from Mason through Jersey counties), but no larval evidence of A. psoraliella  was seen on P. tenuiflorum  at these sites, nor were adults taken in our light traps. This could indicate that A. psoraliella  is absent from Illinois, but a more extensive survey (including inspection in southern Illinois of Orbexilum pedunculatum  , which does not occur on any of the prairies that we surveyed) would be necessary to assess the true status of this species within the state.

Thorax: Collar, tegulae, and dorsum of thorax brown; forewing length 7.2 –8.0 mm (n = 15); forewing brown, ground color somewhat paler than dorsum of head and thorax, with a dark-brown patch along CuP fold at 0.2 length present or absent; a few dark-brown scales above fold from base near 0.6, near a diffuse dark-brown transverse fascia at 0.7; a distal, ochreous band formed from a larger anterior and smaller posterior patch; 5–6 small dark-brown spots beyond anterior ochreous patch, extending to apical margin; fringe pale brown, with a narrow, darker band near base; hindwing brown, fringe as above; ventral surface of forewing and hindwing shining brown, slightly paler than dorsum; ventral surface of thorax shining pale brown; all legs with coxa, trochanter, and femur brown, tibia and tarsus concolorous with thorax ventrally, darker and duller brown dorsally.

Life history. The species is univoltine. At the type locality in central Illinois, mating and oviposition are presumed to occur in early May. The larva feeds on leaves of leadplant, Amorpha canescens  . It lives and feeds inside a shelter that it constructs by silking together two or more leaflets at the apex of a leaf, which at the time is in the incipient stage of expanding. This renders the larval shelter difficult to distinguish from the normal growth form of the apical leaflets ( Fig. 10View FIGURES 7 – 10), but sometimes the presence of a larva is indicated by a small area of browning and/ or a few pellets of frass at the apex of the shelter. The larva of Hystrichophora taleana (Grote)  ( Tortricidae  ) is present at the same time as A. wikeri  and occupies the same feeding mode on leadplant, but H. taleana  is relatively stouter and has larger, more visibly prominent setal pinacula than A. wikeri  . The larva of A. wikeri  matures during the third week of May, after which it pupates and, in early to mid-June, emerges as an adult, in which stage it overwinters.

Host plant and habitat specificity. Three species of Amorpha  occur in Illinois. One of them, Amorpha nitens Boynton  , is known only from a few isolated localities (none of them prairies) in far southern Illinois (Mohlenbrock and Voigt 1959; Taft 2005) and is listed as an endangered species in the state (Herkert and Ebinger 2002). Not surprisingly, the Lepidoptera  fauna (if any) that is associated with this plant in Illinois is not known at present. The remaining two Amorpha  species in Illinois are widespread throughout the state (Mohlenbrock and Ladd 1978), but they occupy different habitats: A. canescens  is a prairie-restricted plant, whereas Amorpha fruticosa Linnaeus  prefers wet areas (Jones 1945). Extensive searching of Illinois populations of A. fruticosa  by J. R. Wiker during the past ten years, as part of a survey to document the occurrence of the elachistid moth, Agonopterix dimorphella Clarke  , has not yielded any Anacampsis  larvae. Therefore, it is concluded that A. wikeri  feeds only on leadplant and thus is obligately restricted to prairie habitat.

Distribution. At present, A. wikeri  is known only from Illinois hill prairies in Mason and Jersey Counties, and from Allamakee County, Iowa (MJ Hatfield, in litt.). It is hoped that the present paper will encourage surveys for this moth in other areas where leadplant occurs.

Etymology. Named in honor of Illinois lepidopterist James R. Wiker, who first reared this species and brought it to the attention of the authors, and who provided much incidental information that was relevant to the description of this moth. 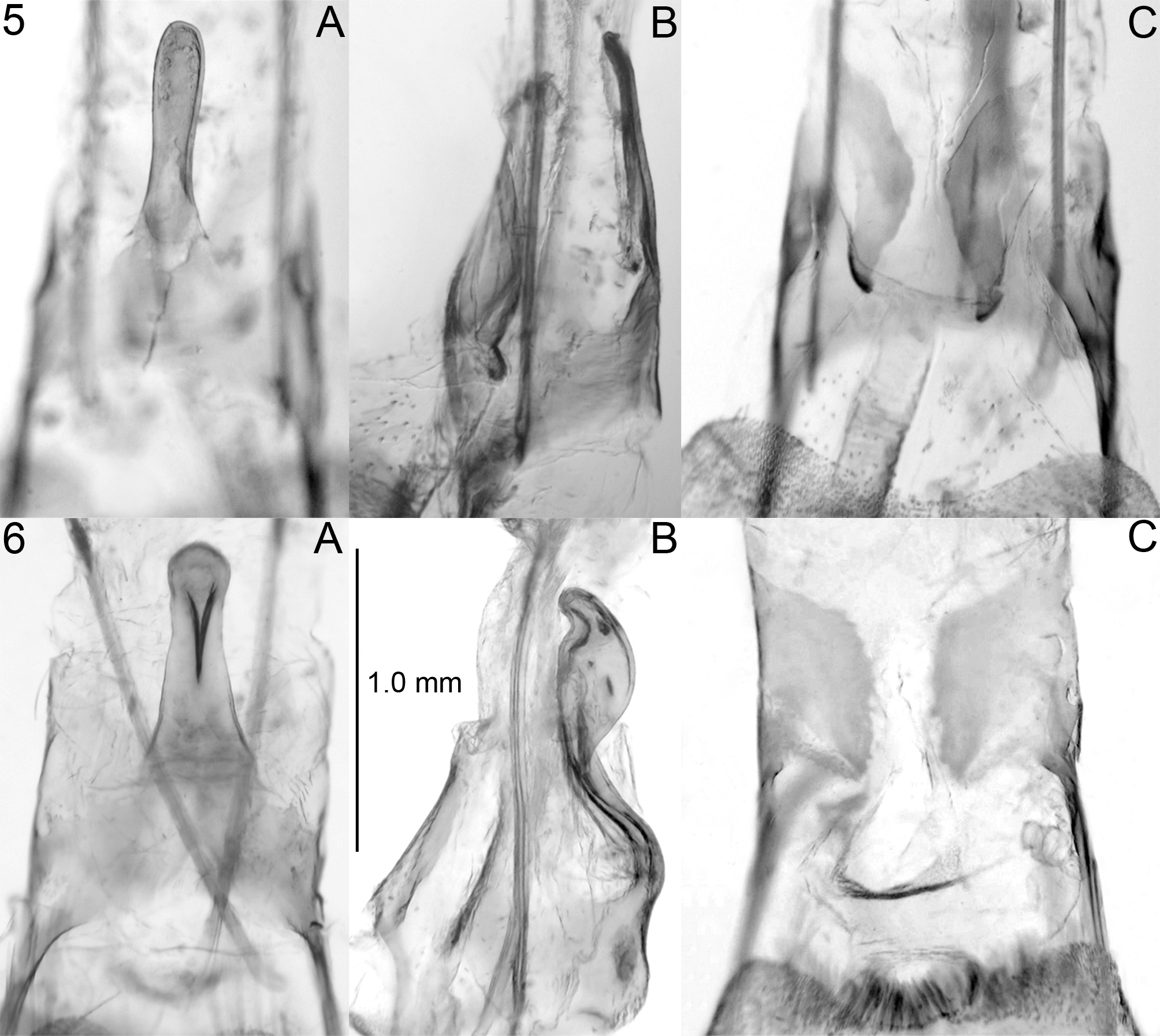 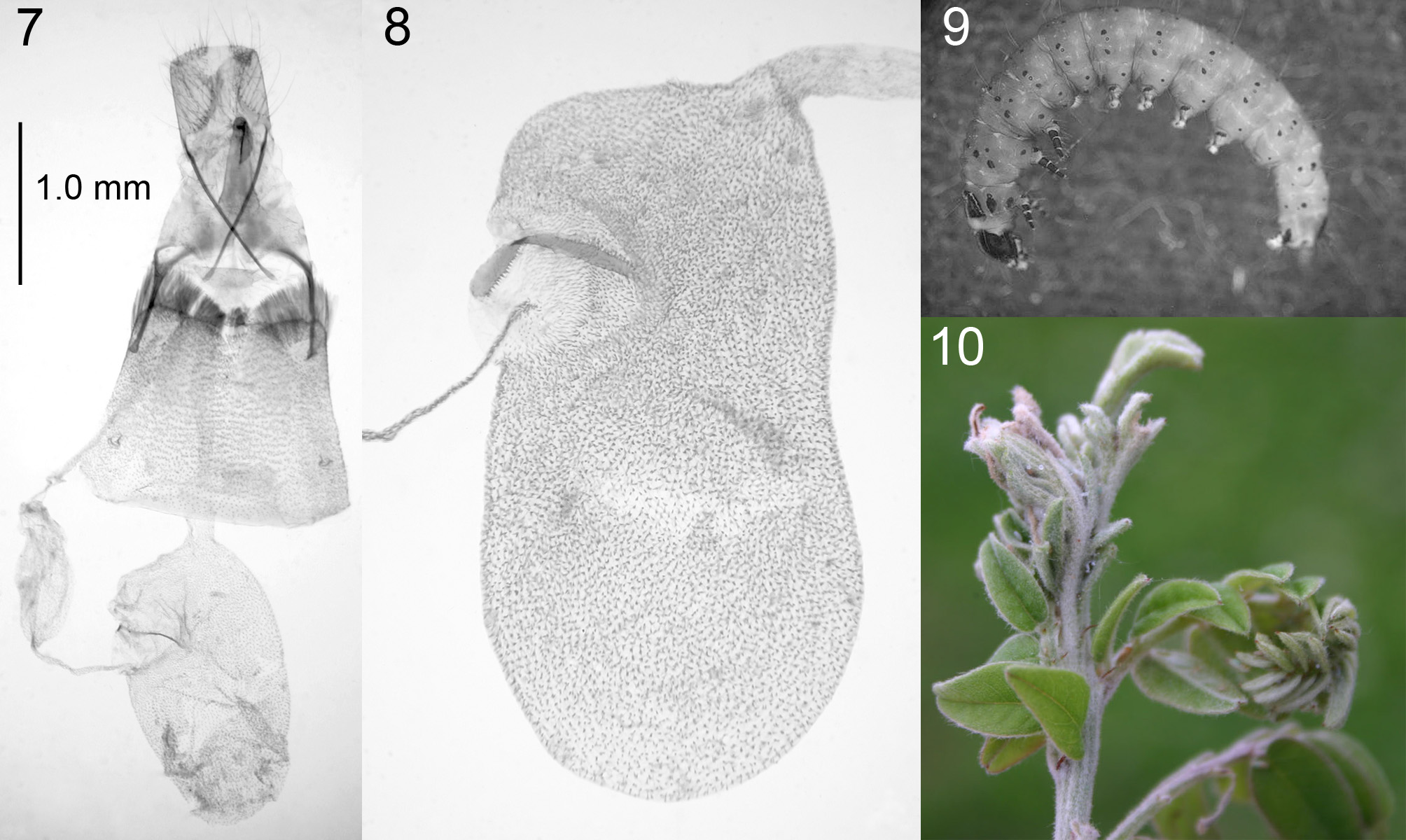