Type species. Glossocephalus milneedwardsi Bovallius, 1887  by page priority. Type material could not be found at the Zoologisk Museum, University of Copenhagen, Denmark ( ZMUC), but the Swedish Museum of Natural History (Naturhistorika Riksmuseet), Stockholm, Sweden ( NRS), has one male specimen ( SMNH 8706) in three pieces, labelled “No. 3690. Atlanten 15 °N 20 °W”, and a microscope slide of the second antennae of another male specimen ( SMNH 8707) labelled “ 10 ° 22 ’N 21 ° 16 ’W ”, which probably represents type material used by Bovallius (1890) for his illustration of the species (pl. 5, fig. 5).

Type species of synonyms. The type species of Elsia  is E. indica Giles, 1890  . Type material could not be found at The Natural History Museum, London, UK (NHM) and is considered lost. However, the description and figures provided by Giles clearly represent a species of Glossocephalus  .

Diagnosis. Body elongate and narrow. Head with small rounded, or sharp rostrum, not longer than first four pereonites. Eye field occupying most of head surface, alternatively screening retinal pigments may appear as pair of crescent-shaped clusters, occupying about one-quarter of back half of head. Male antenna 1 with one-articulate peduncle; callynophore large, crescent-shaped, with small antero-distal lobe and with aesthetascs arranged in onefield brush medially; with three distal articles inserted on antero-dorsal corner. Female antenna 1 with twoarticulate peduncle, narrowly rectangular callynophore, and two smaller terminal articles. Antenna 2 absent in females. Male antenna 2 five-articulate; with strong zig-zagged articulation, and all but terminal article folded back on each other, under head, extending ventro-anteriorly and ventro-posteriorly between the gnathopoda and pereopoda. Mandibular palp absent in females; one-articulate in males. Mandibular molar reduced or absent. Mandibular incisor relatively broad, straight, with several teeth, with small distal lobe medially. Maxilla 1 reduced in size to single, small rounded lobe. Maxilla 2 absent. Maxilliped with inner and outer lobes separate; inner lobes completely fused, reaching to about half-length outer lobes; medial margin of outer lobes with membranous fringe; peduncle with two small humps near base of outer lobes. Pereonites all separate; first two very narrow, together equal in length to third. Coxa 7 fused with pereonite, remainder free. Gnathopoda relatively small, chelate; carpal process some-what spoon-shaped, ending in sharp tooth, usually armed with few strong setae. Pereopods 3–7 simple. Pereopods 3 & 4 slightly shorter than, or about as long as, P 5; sometimes P 3 & 4, especially P 3, longer than P 5. Pereopod 5 longer than P 6 but similar in structure, in some specimens the articles can be relatively broad and paddle-like, with a relatively small dactylus. Pereopod 7 reduced in size, with enlarged basis; all articles present. Uropoda all with free exopoda, and endopoda; usually with serrated margins. Telson fused with double urosomite, shorter than U 3. Oostegites on pereonites 3–5. Gills on pereonites 2–6 in females, 3–6 in males.

Sexual dimorphism. Apart from obvious morphological differences in the antennae and mandibles, males have a more elongate (less globular) head; gills are absent on pereonite 2, and pereopods 5 & 6 sometimes have slightly broader articles.

Glossocephalus  has a number of unusual morphological characters that distinguish this genus from other members of Oxycephalidae  . In particular the mandibular palp in males consists of a single article, with a rounded lateral process ( Fig. 4View FIGURE 4). In all other genera of the superfamily Platysceloidea, males have a 3 -articulate mandibular palp, and in all other genera of the family Oxycephalidae  the first article of the mandibular palp is exceptionally elongate. It should be noted though that there is evidence suggesting that article length of the mandibular palp may be a particularly labile trait among the Amphipoda ( Browne and Patel 2000)  and thus, while useful for discriminating between species, is a homoplastic character of limited value for inferring phylogenetic relationships. Additional characters that distinguish Glossocephalus  are the first antennae of males that are similar to those of Amphithyrus  and Thamneus  rather than any other oxycephalids; the morphology of the maxilliped ( Fig. 4View FIGURE 4) is unique, in that the peduncle has two small humps near the base of the outer lobes, and the inner lobe has a distinct, medial invagination; pereopods 5 & 6 are sometimes paddle-like, or slender, and the basis is not especially enlarged, as is characteristic of other Platysceloidea; the seventh pair of coxae are fused with the pereonite as in the Parascelidae  and most Platyscelidae  ; males have the gills absent on pereonite 2, and the rostrum is not much longer than found in some other genera of Platysceloidea. Although these unique characters, collectively, might suggest that Glossocephalus  does not belong with the Oxycephalidae  , molecular phylogenetic studies by Browne et al. (2007) and Hurt et al. (2013) strongly support the placement of Glossocephalus  as nested well within the Oxycephalidae  . However, additional molecular analyses of genera in the family will be useful for accurately assessing the relationship of Glossocephalus  to other lineages of oxycephalids. 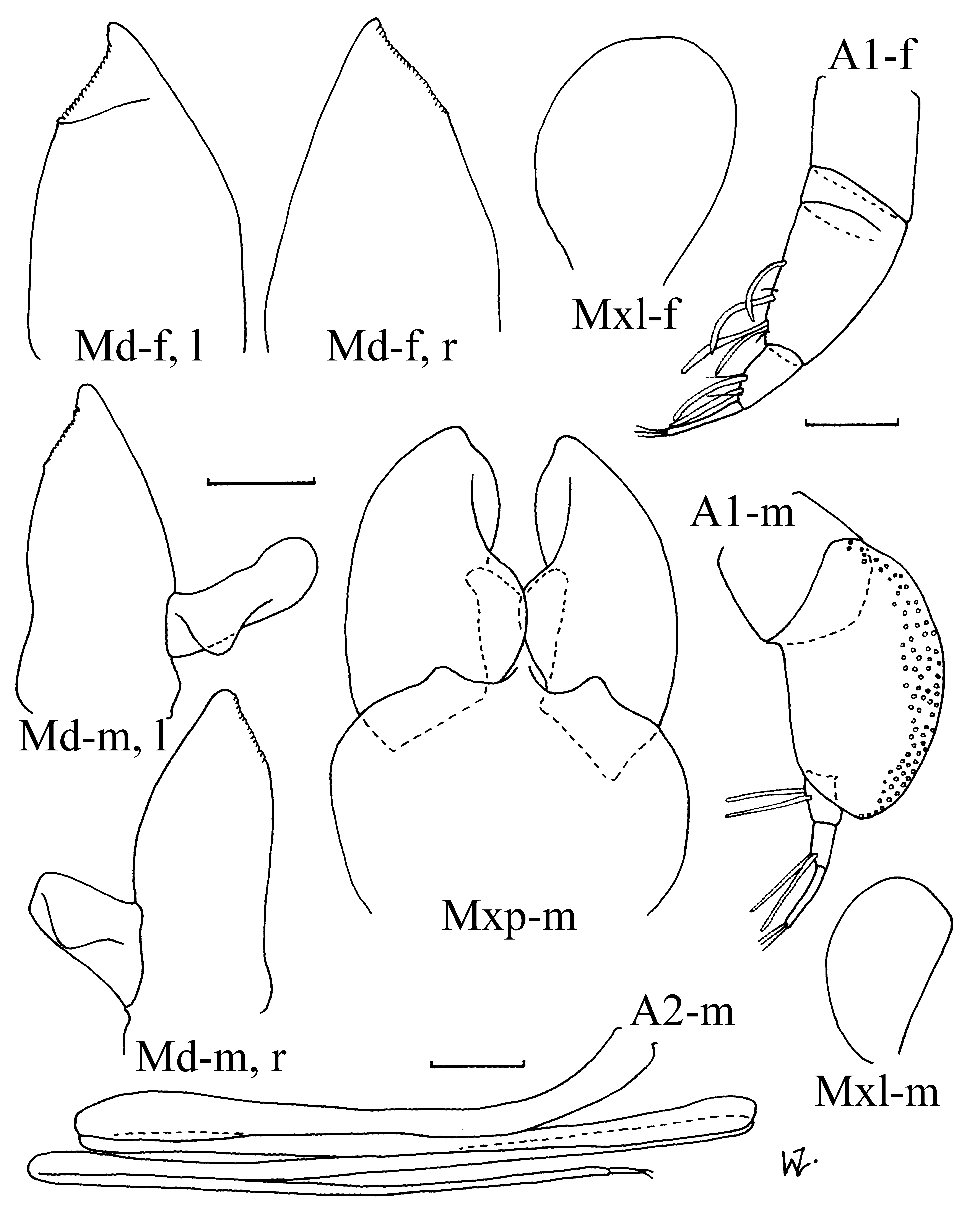