Specimens collected in Iceland during the BIOICE survey (66 ° 1972 N – 19 ° 3543 E, 183m) stored in the MNHN collection were examined to complete the description of the anatomical characters of this poorly known species. The body is globular on a thick but soft peduncle anchored by rhizoids ( Fig. 11View FIGURE 11 A). The largest specimen was 2cm long. The tunic is naked, vitreous and thin. Both siphons are sessile and with an undulated rim. The body wall is thin. The siphon muscles are weak and do not extend upon the body wall. About 10 muscular ribbons cross transversally the left body side and dichotomise only at their ventral and dorsal extremities ( Fig. 11View FIGURE 11 B). The oral tentacles, about 60, are long and thin, planted on a thick rod. The dorsal tubercle is U-shaped placed in a flat V of the pre-pharyngeal groove. The dorsal languets are pointed, followed by a retro-pharyngeal band as long as the dorsal lamina. The branchial sac ( Fig. 11View FIGURE 11 E) extends posteriorly to the oesophagus and has 25 rows of 25 spiral stigmata per half row, and 35 longitudinal vessels on each side. The stimata are flat in 4 turns and not interrupted. The gut forms an open loop ( Fig. 11View FIGURE 11 B,D). The oesophagus is narrow, the stomach globular with a wall showing ampullae rather than true folds. The rectum is dorsal, it ends in a wide anus with 5 petal-like lobes ( Fig. 11View FIGURE 11 C). The gonad is entirely included inside the wide open gut loop ( Fig. 11View FIGURE 11 D). The testis is made of small densely packed vesicles and lies close to the stomach and above the ovary ( Fig. 11View FIGURE 11 D). Few sperm ducts arise from the testis mass, joining in a single duct on the internal side of the ovary. The sperm duct turns around the ovary and follows the intestine and rectum before opening against the anus. The ovary is massive; the oviduct is linked to the rectum. Corella borealis  is recorded only from the northern part of the Atlantic Ocean. It differs from the other European species by the design of the left side musculature and the gonad shape. 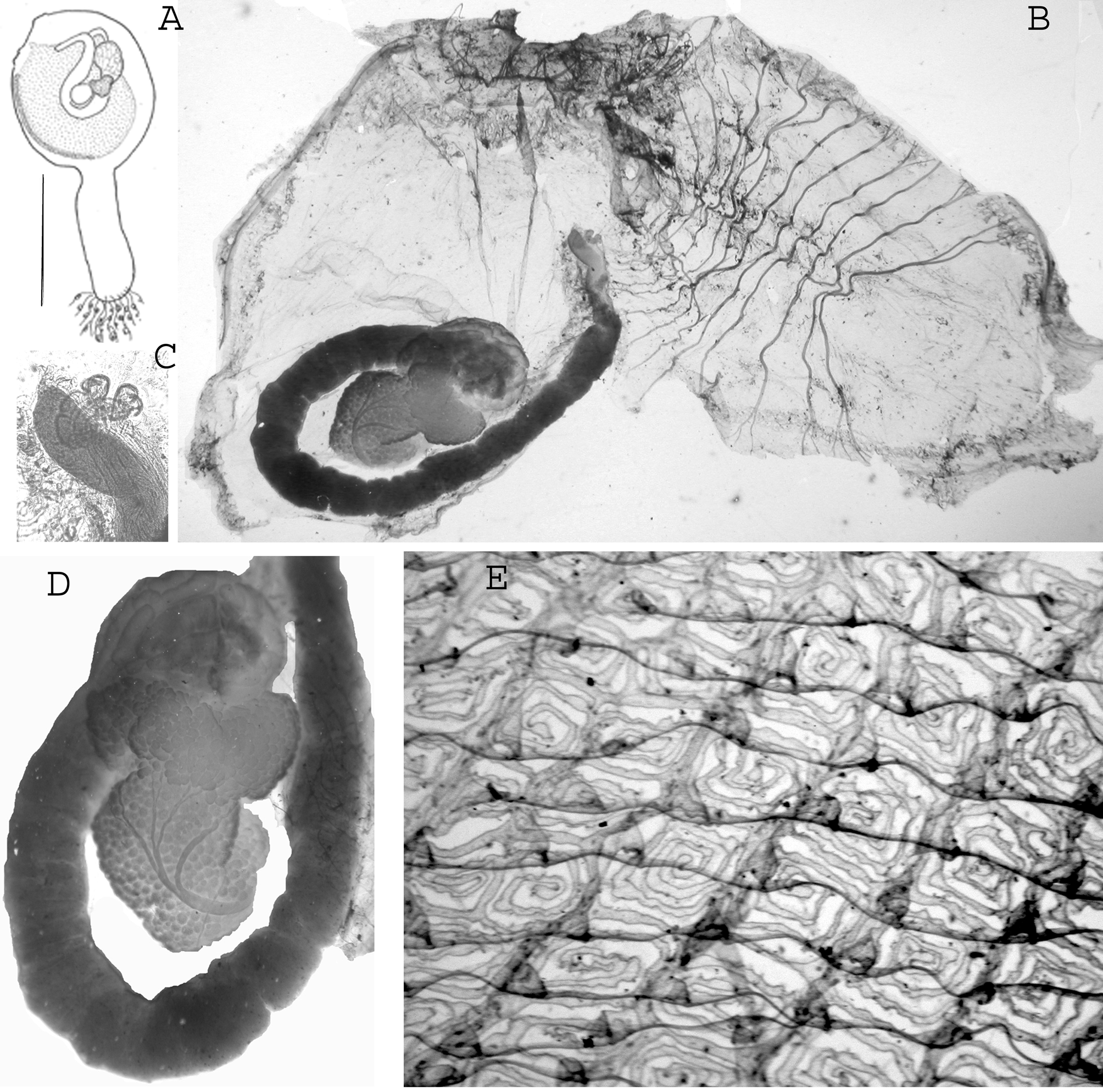