The anatomical characters are described below from specimens from the “First Expedition Antarctique Française 1903-1905 ” (south to Anvers Island), the type location of the species. Several other specimens stored in the MNHN collections and recent material collected by the CEAMARC and REVOLTA surveys in Terre Adélie were also examined. Sluiter’s (1906) original description applies for all specimens examined except for the shape of the anus rim which Sluiter said to be smooth instead of lobed ( Fig. 2View FIGURE 2 B,C) but errors are common by this author. The internal morphology is the same for specimens from the Antarctic Peninsula described by Alurralde et al. (2013) and for samples from Terre Adelie on the opposite side of the Antarctic continent.

All specimens have an elongate shape laterally flattened with the oral siphon apical and the atrial siphon at 1 / 2 or 2 / 3 of the body length. The body size varies from a few centimetres to 25 cm. The tunic is smooth, soft, cartilaginous, not translucent in life, thicker in the basal part. The siphons are not protruding. Removed from the tunic both siphons are short tubes, the oral one with 7-8 low lobes and the atrial with 5–6 lobes, but the siphonal rim is often simply undulated. The oral and atrial sphincters are made of muscular fibres thinner than the body muscles. The longitudinal fibres of the siphons are short and do not extend to the lateral right body side. The right body wall is devoid of musculature. On the whole left body side ( Fig. 1View FIGURE 1 A) strong muscular ribbons start transversally and obliquely from the ventral and the dorsal lines and branch to form a network of crossed ribbons; this design is common to all southern Corella  species. The tentacles are long and numerous in 3 orders, their number varies with the body size and between individuals from 50 to 100. The pre-pharyngeal band has two edges and is prolonged on the dorsal line into a groove anterior to the dorsal languets. The dorsal tubercle is U shaped with horns rolled internally ( Fig. 1View FIGURE 1 A). The dorsal languets are irregularly distributed in two sizes but irregularly: successive longest ones lie in the anterior part of the dorsal lamina but farther smaller languets are intercalated to become irregular and disappear near the oesophagus entrance. This character was already noted in Sluiter’s (1906) description, in Ärnback-Christie-Linde (1938) and is also considered distinctive by Alurralde et al. (2013). On the contrary, the dorsal languets are all of equal size in C. eumyota  and C. brewinae  n. sp.

The branchial sac occupies the whole body length. Its tissue becomes proportionally very thick in large specimens ( Figs 1View FIGURE 1 B, 2 A) but remains thinner in deeper ones. The dorsal side of pharynx is attached to the body wall and to the intestine. The thin longitudinal vessels are suspended above triangular papillae coming from the transverse vessels. A network of wide empty vessels make a honeycomb structure linked (but not regularly) to the stigmata. They unite the body wall to the branchial tissue. The stigmata spirals are not well aligned with the longitudinal vessels, exo-spirals are frequent ( Figs 1View FIGURE 1 B, 2 A). Each main spiral makes 4 to 7 interrupted turns almost flat in young specimens, they sink in infundibula in large and contracted animals.

The gut and gonads occupy 1 / 3 of the right body side ( Fig. 1View FIGURE 1 A). The oesophagus is short with a thickened entrance in shape of a large lip. The ovoid stomach has about ten longitudinal folds on the internal side and a longitudinal typhlosolis on the external side between oblique folds. The tubular intestine forms a first closed loop. The rectum begins posteriorly to the oesophagus without crossing it and follows the dorsal line. It is attached to the body wall and the dorsal lamina. The gaping anus has numerous round lobes ( Fig. 2View FIGURE 2 Ba, Ca). Its opening is U shaped as it follows the internal and longitudinal intestinal fold (Alurralde et al. 2013 Fig. 3View FIGURE 3 a). The gonads do not have a precise outline. The ovary is made of irregular ramified lobes spread over the stomach and a large part of the internal gut loop over passing the intestine outline when well developed. The testis lies over the whole gut loop with small vesicles gathered in irregular branched lobes mixed to the ovary lobes. Thin primary sperm ducts converge to the centre of the gut loop, become larger and join to form a common duct which follows the intestine. Sperm duct and oviduct are tightly linked to the rectum and obviously open together above the anus in long papillae ( Fig. 2View FIGURE 2 B, C, arrows). The female aperture is a simple hole opening at some distance from the male papilla; both papillae and ducts are strongly attached to the dorsal lamina and to a mid-dorsal muscular ribbon running along the dorsal line. A large vessel which may be the heart runs into the body wall from the oesophagus to the dorsal side of the gut and curves in a cross more anteriorly ( Fig. 1View FIGURE 1 A). It often contains an inclusion in its extremity.

The individual variability is important in all locations either for shore specimens or deeper ones. More material would be necessary to know if all specimens attributed to C. antarctica  represent a single species around the Antarctic continent and whether this is true at all depths and all longitudes. 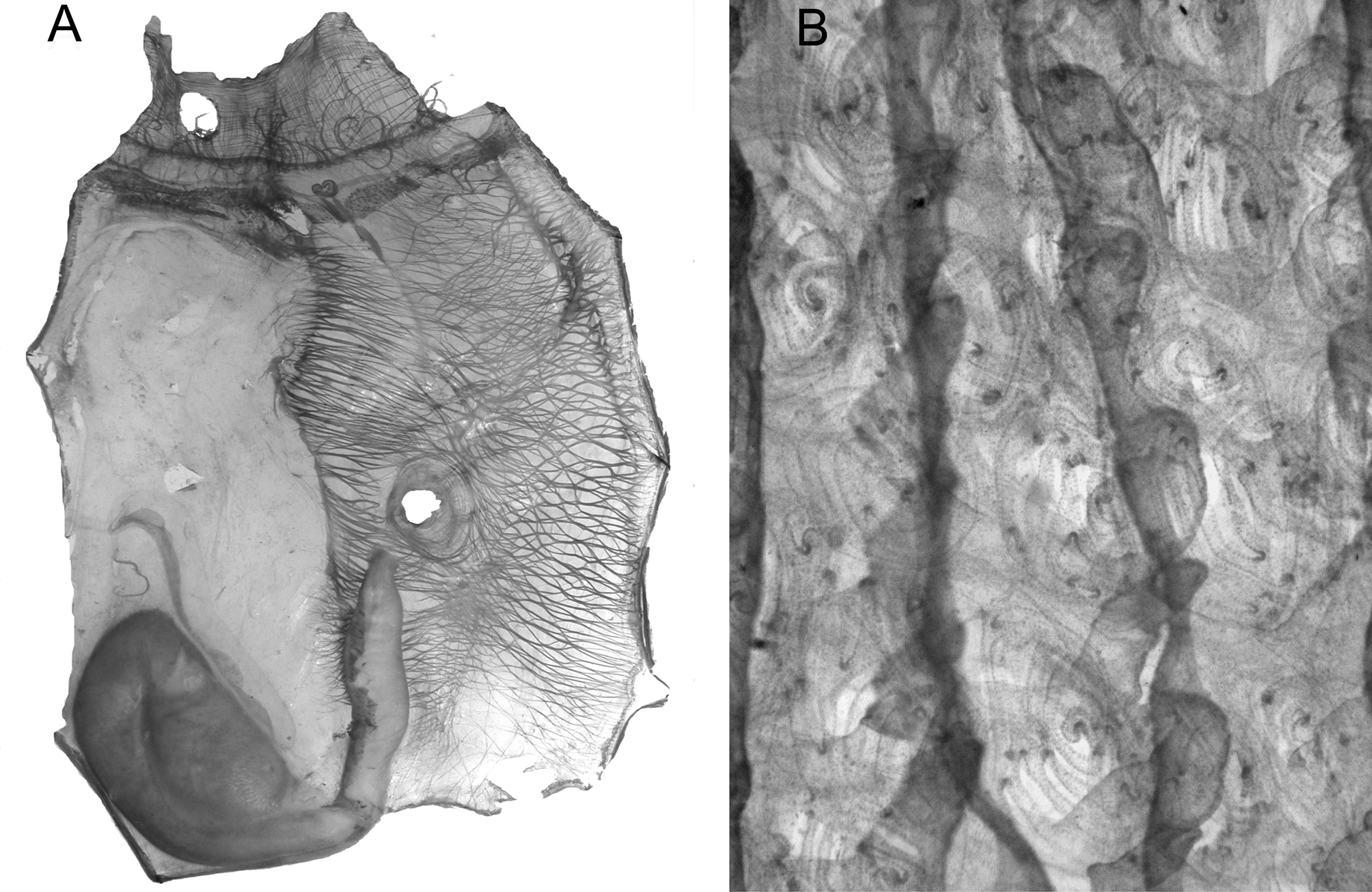 FIGURE 2. Corella antarctica: specimen from Terre Adélie. A, branchial tissue; B and C, anus and genital papillae of 2 specimens (arrows). 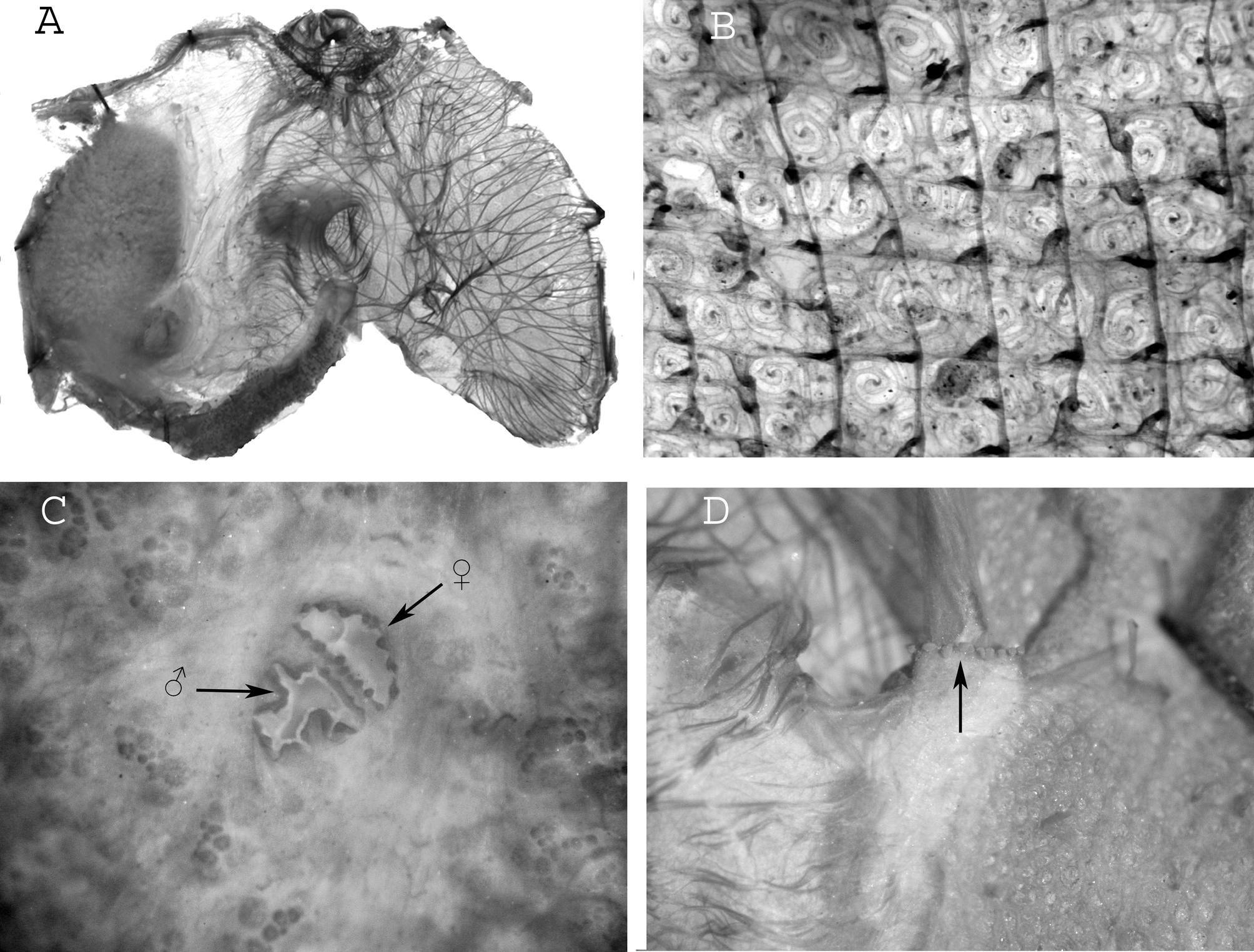