Etymology. The specific name refers to the high number of gonads of this species.

Habitat and distribution. Brazilian specimens were collected from a rope where they attached as a clump of about 8 individuals. The Yacht Club of Vitoria is an urban marine environment. In Venezuela, animals were found in the entrance of a large bay, where many fishing boats are moored. This bay is bordered by mangrove and the water is fully marine.

External appearance. Individuals are oval, with a leathery tunic with rough appearance and greenish brown color, mainly in the dorsal region, close to the siphons ( Figs. 1B View FIGURE 1 and 3A View FIGURE 3 ). Specimens are 32–40 mm in length. Some epibionts were observed, such as colonial ascidians, tubular polychaetes, anthozoans and bryozoans.

Internal morphology. Length without the tunic is 28–29 mm, width is 15–18 mm. The body wall is thick and opaque ( Figs. 3B and 3C View FIGURE 3 ). The longitudinal muscles are visible in the three Brazilian specimens studied. The oral siphon is apical while the atrial be a little way back on the dorsal side, both of similar lengths, reaching almost 5 mm. In each siphon, four triangular lobes and eight whitish bands are observed. Numerous 10–30 µm long scale-like siphonal spines are present on the internal side of both siphons. They are flattened and triangular shaped in surface view. The free margin is usually irregular with numerous small teeth or smooth ( Figs. 3I and 3i View FIGURE 3 ).

Oral tentacles are simple and filiform, 32–62 distributed in four orders of size, and observed at the base of the oral siphon ( Fig. 3E View FIGURE 3 ). The prepharyngeal groove is formed by a simple blade, with the peritubercular area in a ‘V’ shape. The dorsal tubercle is globular, with a diameter of 0.77–1.3 mm and with a variable-shape opening ( Fig. 3E View FIGURE 3 ), usually as a ‘U’. The dorsal lamina is simple and continuous until the perioesophageal region, where it moves to the left side of the oesophageal opening, with the lower portion being wider. The pharynx has four well-developed folds on both sides, with 94–103 longitudinal vessels on the right side and 94–101 on the left side ( Fig. 3E View FIGURE 3 ). There are 7–12 longitudinal stigmata per mesh. Parastigmatic vessels are present. The formula for the longitudinal vessels of the holotype and of the two paratypes follows:

The oesophagus is relatively short, slightly curved. The stomach is elongated, 11.9–14.3 mm long, cream colored, with 22–23 internal longitudinal folds, running from the final portion of oesophagus to the beginning of intestine, sometimes visible on the exterior surface. The stomach has a longitudinal flat region along the side touching the body wall, with internal transverse grooves. A ligament is observed between the posterior portion of the stomach and the first loop, but there is no gastric caecum. The intestine is isodiametric and forms primary and secondary loops, secondary loop being wider than the primary ( Fig. 3D View FIGURE 3 ). The anus opens near the base of the atrial siphon, with a multilobed margin. Short and numerous filiform tentacles are present at the base of the atrial siphon, forming a ring from which at each side of the dorsal mid-line two elongated regions also covered by tentacles project towards the dorsal tubercle. The digestive tube attaches to the body wall through thin ligaments and detaches easily during dissection. Endocarps of varying sizes and normally not abundant protrude from the body wall and, usually, from the first intestinal loop too ( Fig. 3H View FIGURE 3 ).

Hermaphroditic gonads are present on both sides, from five to eight on the right side ( Figs. 3D and 3F View FIGURE 3 ) and from four to five on the left side. The ovary is elongated, cream colored, straight to sinuous in shape with round cross section, usually filled by oocytes of 0.218 –0.228 mm in diameter ( Fig. 3F View FIGURE 3 ). The length of the ovary is 9.5–17.6 mm on the right side and 7.6–14.3 mm on the left side. The ovaries end with the orifice directed toward the atrial siphon into a free and usually short oviduct. Bifurcations in the ovarian tubes may be present in the middle length of some ovaries. One to three most dorsal ovaries on the left side, usually smaller than the others, are located entirely within the second intestinal loop. Testicular follicles are numerous, whitish and equally distributed beside and close to the ovaries. They are digitiform and very long, sometimes branching at the proximal end to form up to four lobes per follicle ( Fig. 3G View FIGURE 3 ). The follicles are attached to the body wall by the proximal end only, where a thin sperm duct connects them all to the main tube that runs along the surface of each ovary to open at the beginning of the oviduct in a papilla of varying length.

The phylogenetic reconstruction of available COI sequences of Styela ( Fig. 5 View FIGURE 5 ) was unable to clearly resolve the relationships among the species included in the analyses. However, the phylogenetic tree shows that S. multicarpa sp. nov. and S. panamensis sp. nov. are closely related with S. plicata , S. canopus and S. clava . FIGURE 3. Styela multicarpa sp. nov. (from Brazil). A. external appearance; B. right side body; C. left side body; D. overview of specimen dissected without the pharynx; E. detail of pharynx and anterior region; F. specimen with seven gonads on the right side and four gonads on the left side; G. very long digitiform testicular follicles; H. endocarps on the first intestinal loop; I. siphonal spines; i. two views of the siphonal spines shape. Scales bars = 10 mm. 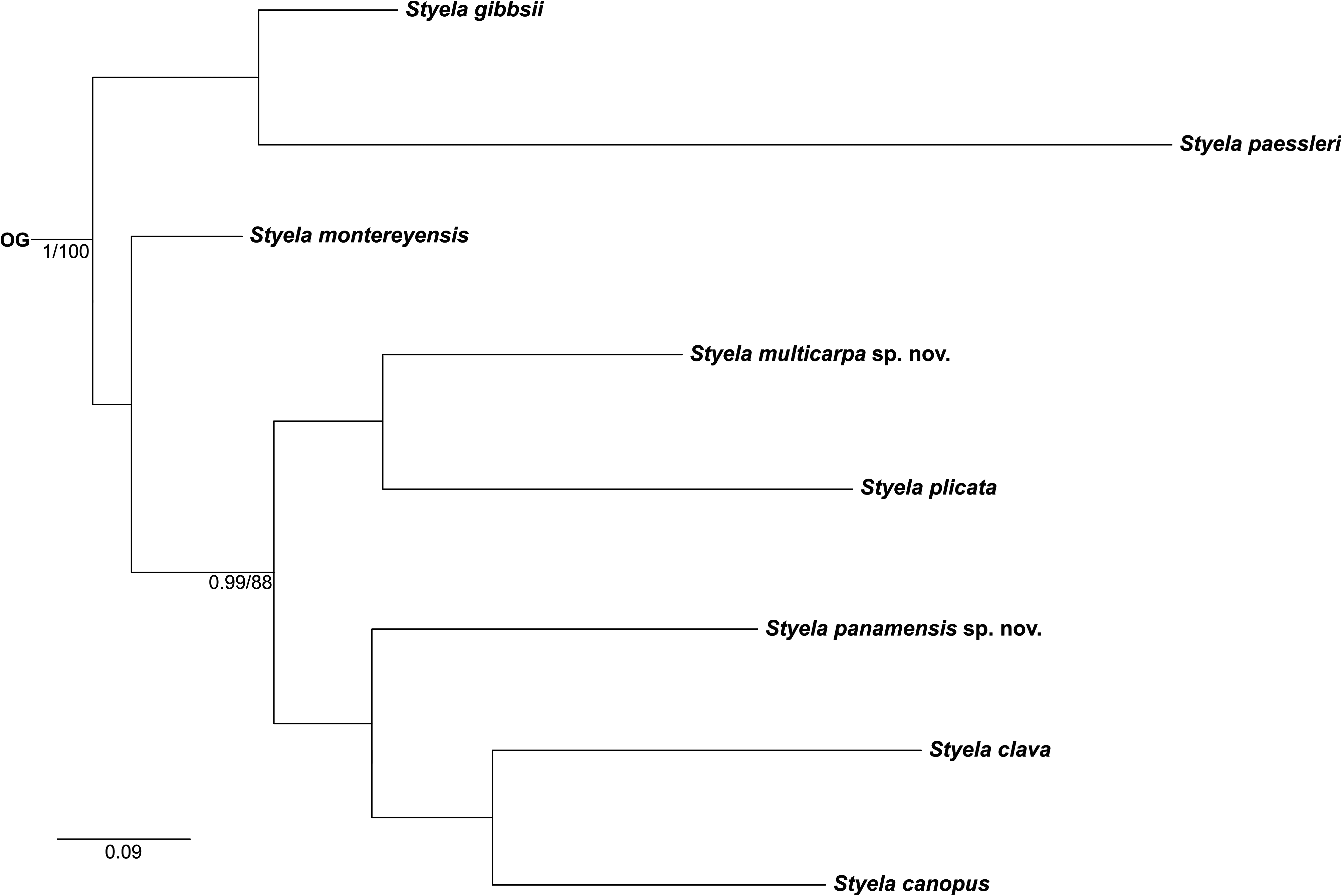