Description of male. Coloration. Integument black extensively marked with yellow, as follows: mandibles, labrum and clypeus entirely; inner face of scape; large quadrangular mark on frons right above clypeus; broad band on emargination and upper inner orbit of compound eye; band on upper gena; broad band on anterior and dorsal surfaces of pronotum adjacent to the pronotal carina, and thin band on posterior margin of pronotum; most of upper mesepisternum; tegula anteriorly and posteriorly; apical half of disc and lateral bands of scutellum entirely; spot on dorso-lateral surface and lateral processes of propodeum entirely; most of fore trochanter; posterior and outer surfaces of fore femur; anterior and outer surfaces of fore, mid and hind tibiae; spot on pointed projection of mid coxa; inner surface of mid femur; small apical spot on outer surface of hind femur; large lateral spots on T 1; broad band on disc of T 2 interrupted medially and complete on T 3 -T 5; lateral and central spots on T 6; central small spots on S 4 -S 7. Dorsal surface of pronotum mostly and T 1 reddish ferruginous. Metasoma dark brown except for yellow and ferruginous marked portions as indicated above. Flagellum beneath light chestnut. Middle of tegula and legs (except for yellow marked portions as indicated above) dark brown to chestnut. Wings and venation ambarine.

Variation. Some males may present a reduction on the ferruginous coloration on dorsal surface of pronotum, some lacking it at all; others may present it extensively ferruginous and even a very lighter metasoma.

Remarks. Hermes & Melo (2006) described T. tubra   based solely on females. They mentioned that this species could be closely related to T. americana   , T. howardi   and T. neotropica   , a condition that is prone to be corroborated by ongoing cladistic analysis (Carpenter & Garcete-Barrett, in prep.). It may be differentiated from the other species by the characters mentioned in the present key and by the key provided by Hermes & Melo (2006). The male of T. rubra   is described for the first time. It may be associated to the female by the general color pattern, with reddish suffusion on the pronotum and extensive yellow markings along entire body; and the fore femur is definitely wider but slightly truncate basally. 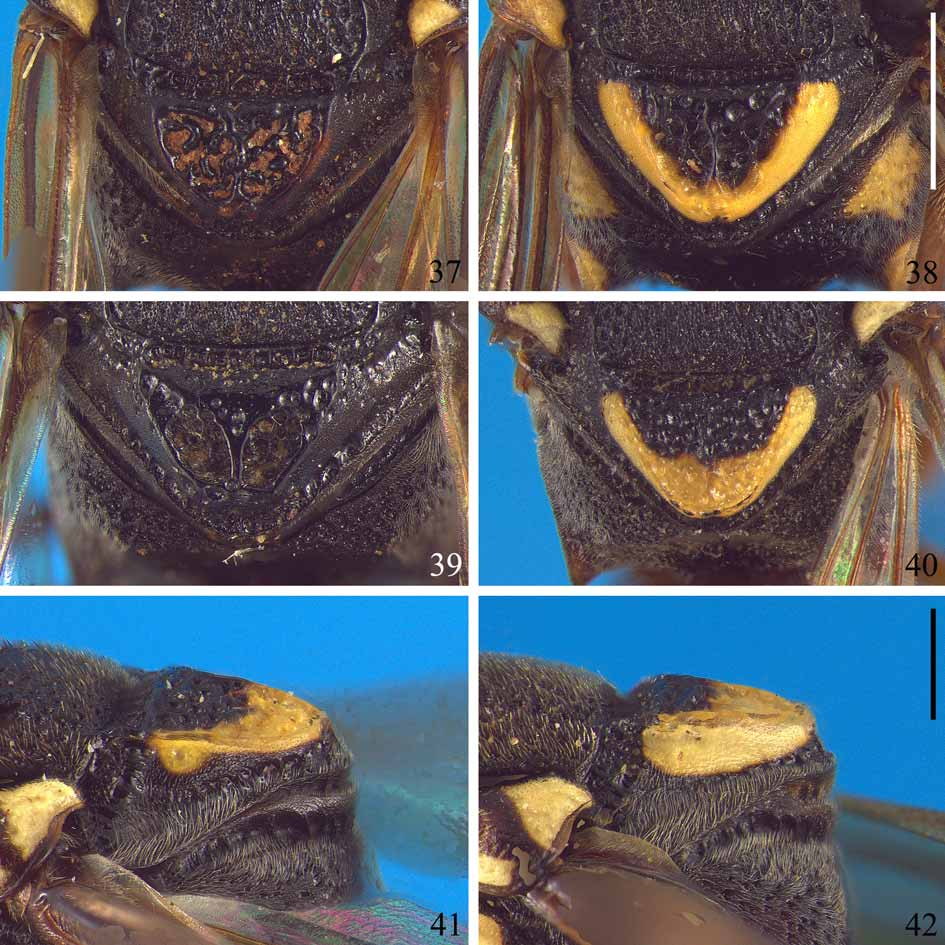