See the extended diagnosis under T. bogotensis  for the diagnostic characters of T. nitens  .

Tetragnatha nitens  was first described from Egypt, but its syntypes are lost according to Levi (1981). This common species has been diagnosed and redescribed many times, with plentiful illustrations of its body, chelicerae and genital morphology (e.g. L. Koch 1872; O. Pickard-Cambridge 1872; Simon 1898; F. O. Pickard-Cambridge 1903; Chickering 1957c; Okuma 1983, 1987, 1988b, 1992). Furthermore, it is a senior synonym for 17 species or subspecies according to the World Spider Catalog (2019). As it is easily mistaken for other large-bodied species, misidentified specimens are commonly found in museum collections.

Mainly based on our observations of the morphology of the chelicerae, we propose three new synonymies for T. nitens  : T. peruviana  from Peru, T. decipiens  from Paraguay, and T. caporiaccoi  from Guyana. The type materials of all species were studied; for T. peruviana  images from MIZ were examined, and for T. decipiens  and T. caporiaccoi  specimens were studied on visits to NHM and MRAC, respectively.

Tetragnatha decipiens  and T. caporiaccoi  were described only from females, while descripitions of T. peruviana  were based on males and females, with males described first, even though only females were illustrated. Females of the three species and males of T. peruviana  clearly show the diagnostic characters of T. nitens  (see Diagnosis above).

This species was first described from Africa (Egypt), but it has a cosmopolitan distribution, with many new records from the Neotropics ( Fig. 22EView Figure 22). 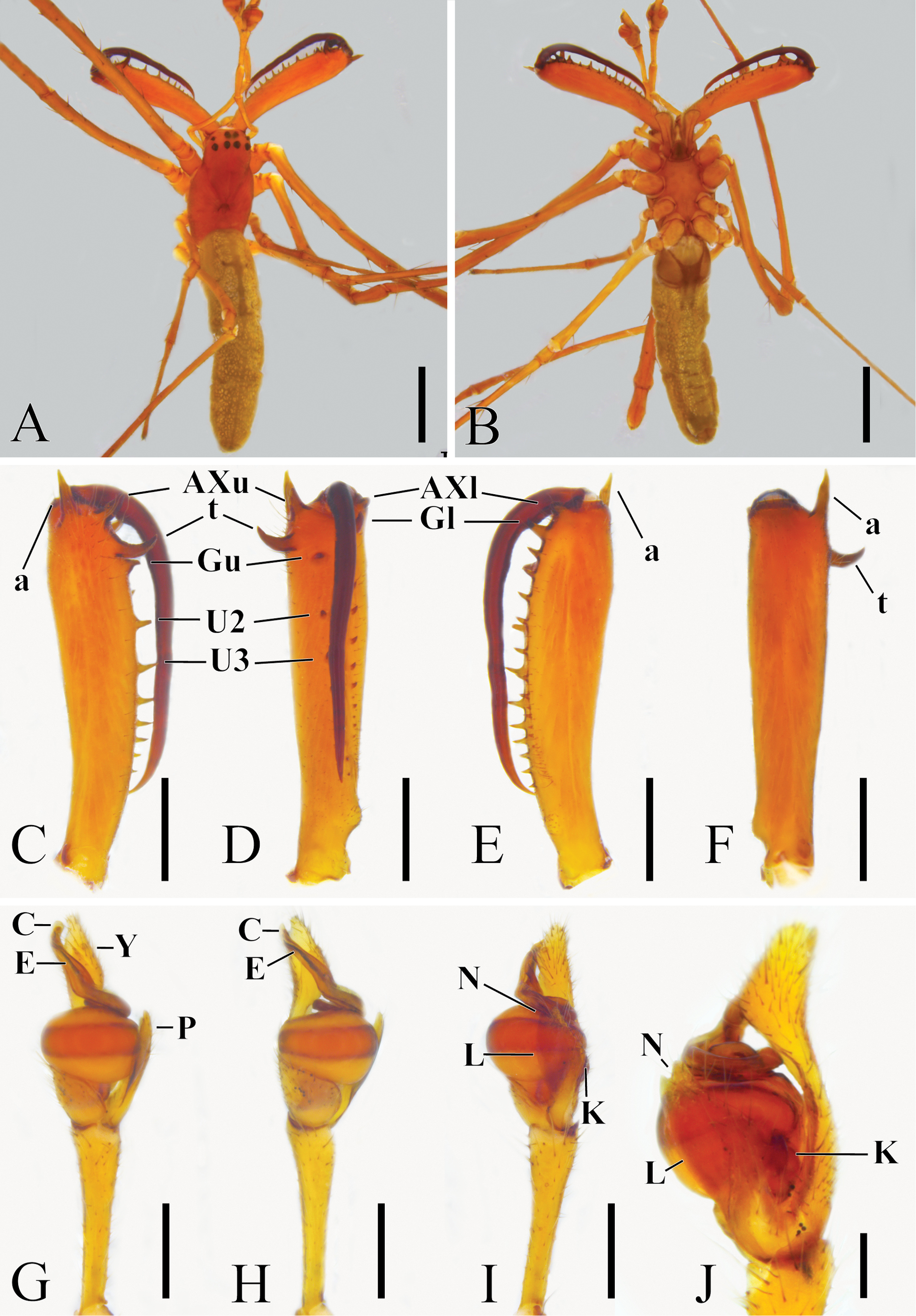 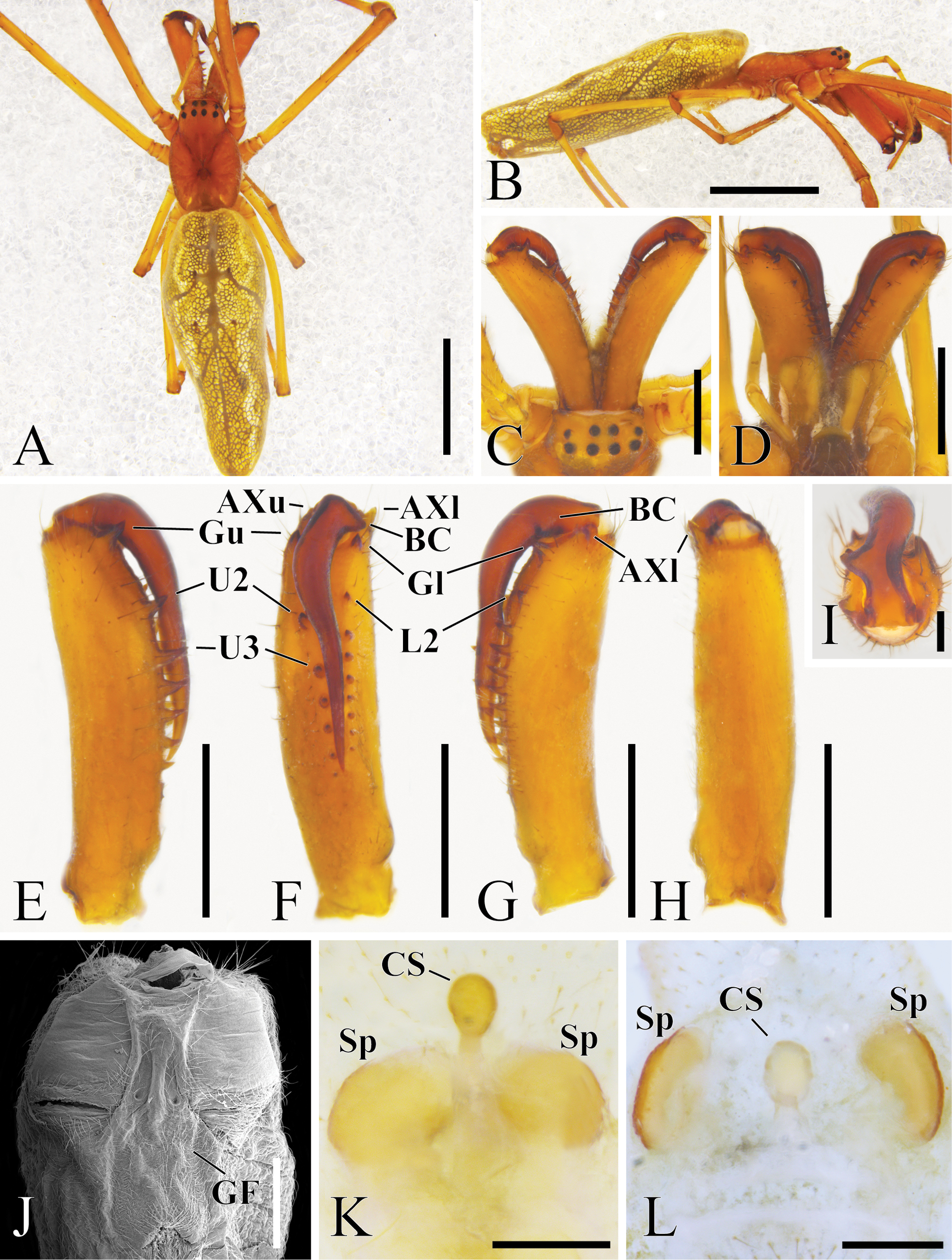 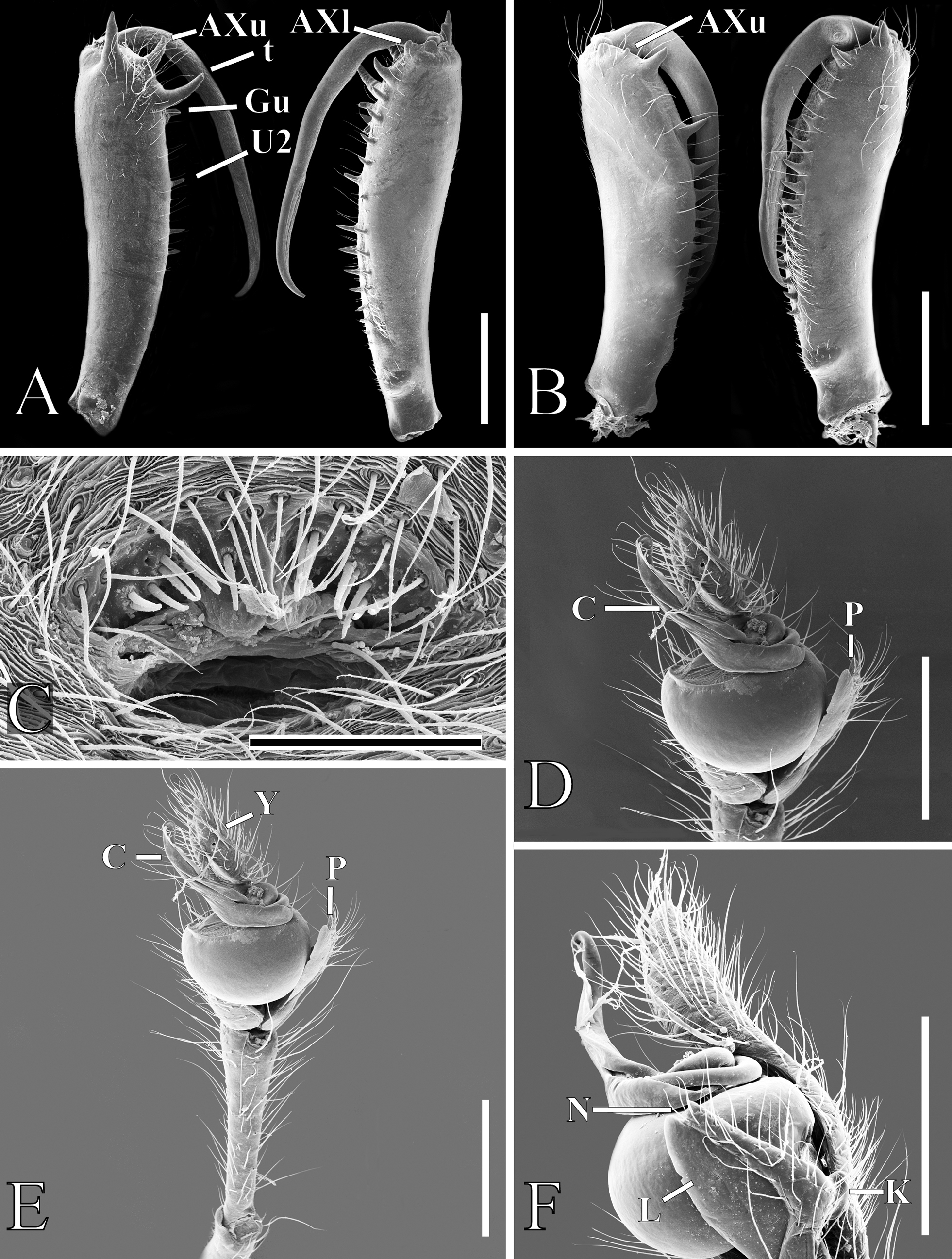 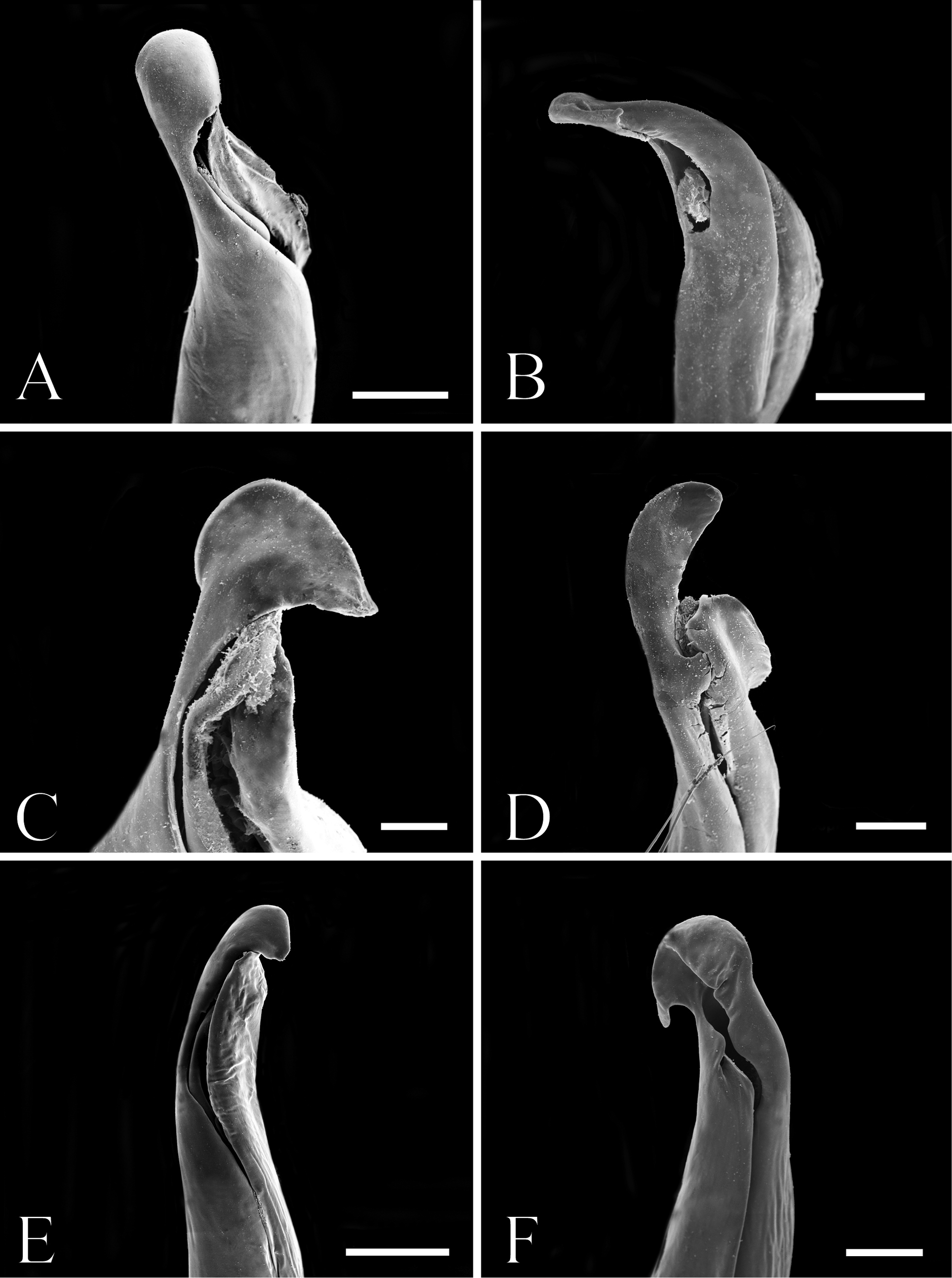 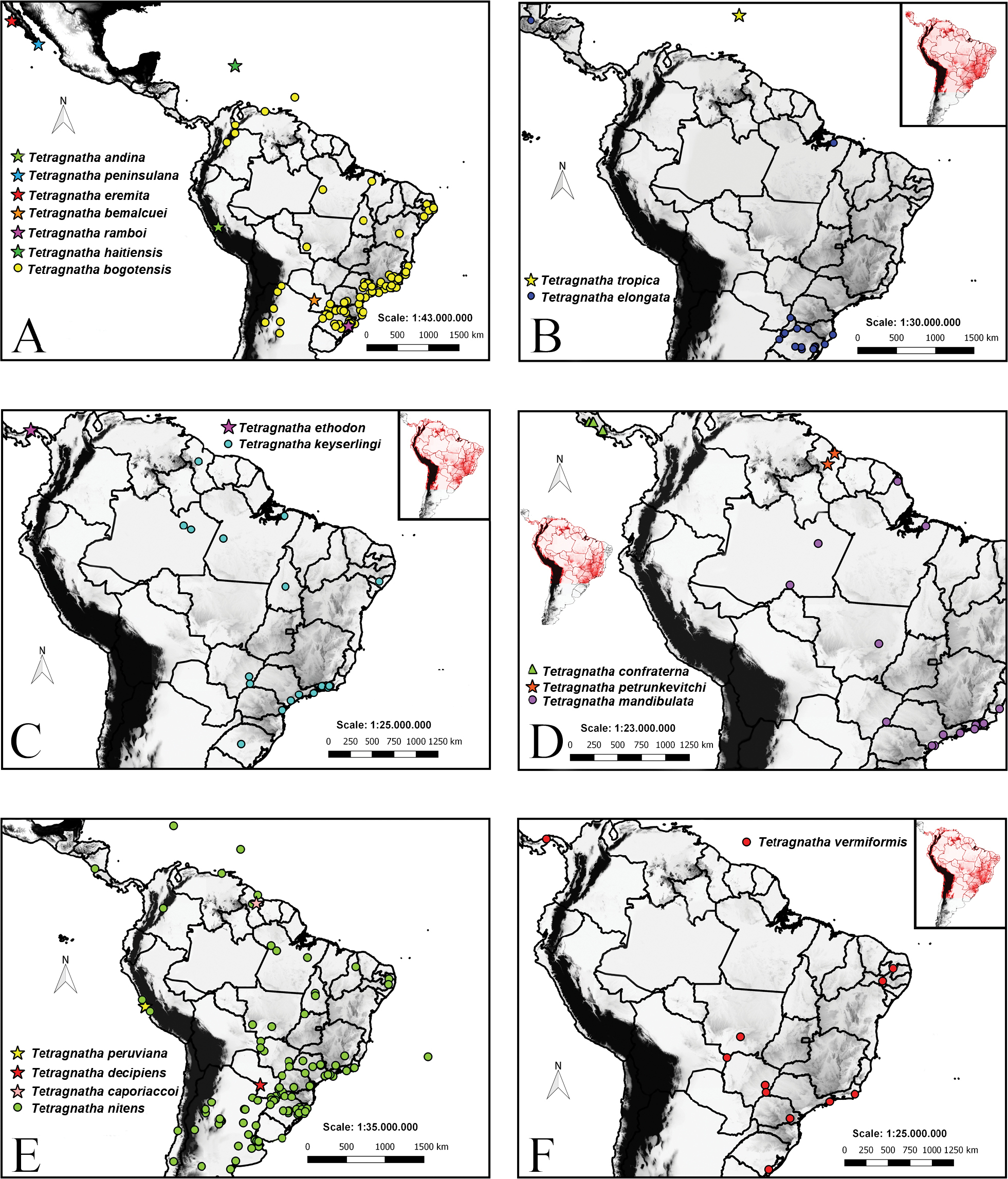