This was the second species described from New Caledonia and was described by Redtenbacher (1906) where he gave little to differentiate the species from Trolicaphyllium brachysoma comb. nov. except for the abdominal shape and the overall size as being smaller.

Within the original description by Redtenbacher the number of syntypes was vague, but at least three are explicitly stated as "New Caledonia (Coll. M., Mus. Paris); New Guinea (Mus. Budapest)" ( Redtenbacher 1906). At least one syntype was within Redtenbacher’s own collection (noted as "Coll. M." within his work) and eventually his collection was deposited in Vienna where it resides today, and the specimen could be traced (Fig. 27 View Figure 27 ; Kaltenbach 2003). Additionally, he states at least one syntype from the "Mus. Paris" which has also survived and was traced (Fig. 26 View Figure 26 ).

An additional syntype was explicitly noted as a nymph within the Budapest Museum (with the wording suggesting that there is only one syntype within that collection). Unfortunately, a fire during the Hungarian Revolution of 1956 destroyed the Budapest syntype along with many of the museum’s important type specimens ( Brock 1998; Földvári and Papp 2007; Sabaj 2020). This syntype within the Budapest Museum was noted as being a nymph female from New Guinea with large broad forelegs reminiscent of " Phyllium pulchrifolium Serv." ( Redtenbacher 1906). Based on this information it is very likely that this was not actually a Trolicaphyllium gen. nov. specimen as this genus is restricted to New Caledonia and is only known to have rounded profemoral lobes. Instead, this nymph specimen was more likely a female Nanophyllium Redtenbacher, 1906 of which certain species can be small and reminiscent of Trolicaphyllium gen. nov. or Chitoniscus specimens but have broader profemoral exterior lobes (for example Nanophyllium chitoniscoides ( Größer, 1992)).

Within the MNHN there is an adult female syntype specimen collected by Philippe François (Fig. 28 View Figure 28 ) from Canal Woodia (canal de Woodin), a common shipping path which runs between Ile Ouen and the south coast of Grande Terre ( Bernard 1894). The MNHN type database has the specimen reported as being collected sometime in 1892 (based upon the specimen label “-92”), however, this record number appears to not correspond to the collection year as Francois was not in Oceania 1892. By all accounts, François was actively researching in Oceania from 1888-1891, was back in France in 1892, and then returned to Oceania from 1893-1895 (Bulletin Scientifique 1909; Dewarumez 2011). We believe that this date on the label instead corresponds to the date the specimens were received by the museum and was instead collected by Francois between 1888 and 1889 when he passed through Canal Woodia (canal de Woodin) several times during his first journey to New Caledonia to study the biology of coral reefs ( Bouyssi 1997).

Interestingly, Redtenbacher only appears to have measured one specimen of the type series, the one within his own collection (now within the NHMW), most likely he had seen the Paris and Budapest specimens prior and did not measure them while reviewing them. Harald Bruckner (NHMW) measured the single syntype within their collection and it agrees with the measurements recorded by Redtenbacher (Fig. 27 View Figure 27 ). Interestingly, the smaller overall body length (42.0 mm) appears to be somewhat artificial as the abdomen is significantly excavated and somewhat ballooned outward, pulling the abdomen shorter (Fig. 27C View Figure 27 ). This is supported by the observation that the other features of this specimen (such as the tegmina length; 27 mm) are actually closer to average sizes for other Trolicaphyllium gen. nov. specimens of other species. Realistically it seems this specimen if it were naturally flat might actually be closer to a range of 50 mm, and not significantly smaller after all.

No etymology was given in the original description, but it can be assumed that Redtenbacher was referencing the lobed abdominal shape with Trolicaphyllium erosus , from the Latin e - (out/away from) and - rosus (gnaw/peck), noting that the leaf-like body appears gnawed on, giving it the undulating appearance.

To date this appears to be the least known species on New Caledonia as we have not been successful in tracing any additional females which fall within this small size range of ca. 40 mm beyond one of the syntypes. All specimens examined so far appear to belong to the other species with their larger size (ca. 50-60 mm). In fact, it is only this smaller size which we have found as useful for differentiation as the other features match up with the prominently lobed Trolicaphyllium sarrameaense comb. nov. females. The additional specimens identified as Trolicaphyllium erosus comb. nov. within the MNHN are larger than the syntype within the NHMW and several are rather morphologically similar to Trolicaphyllium sarrameaense comb. nov. due to their larger size and lobed abdomen but are at this time tentatively left identified as Trolicaphyllium erosus comb. nov. within the collection.

Additionally, we have yet to locate any possible male Trolicaphyllium erosus comb. nov. as all males located were much too large and appear to belong to the other two species.

The only specimen we have located with detailed locality information is the syntype female from the MNHN collection which has the additional information of "Canal Woodia" which is a small canal between Ile Ouen and the south coast of Grande Terre (Fig. 21 View Figure 21 ). The additional non-type specimens from the MNHN are included within the distribution map, but only tentatively as they are slightly larger than the measured syntype from NHMW and they have variable abdominal shapes, some more strongly lobed than others. 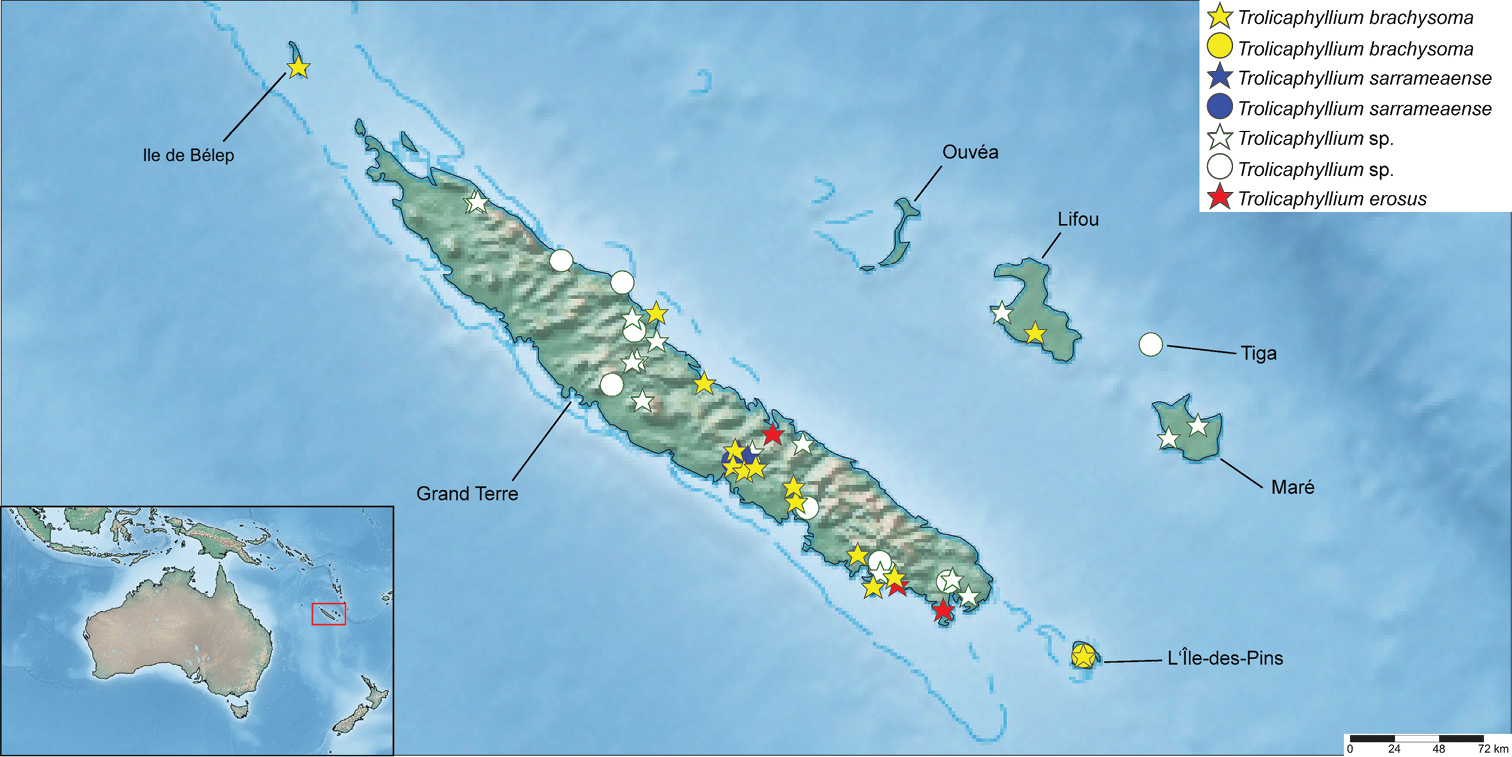 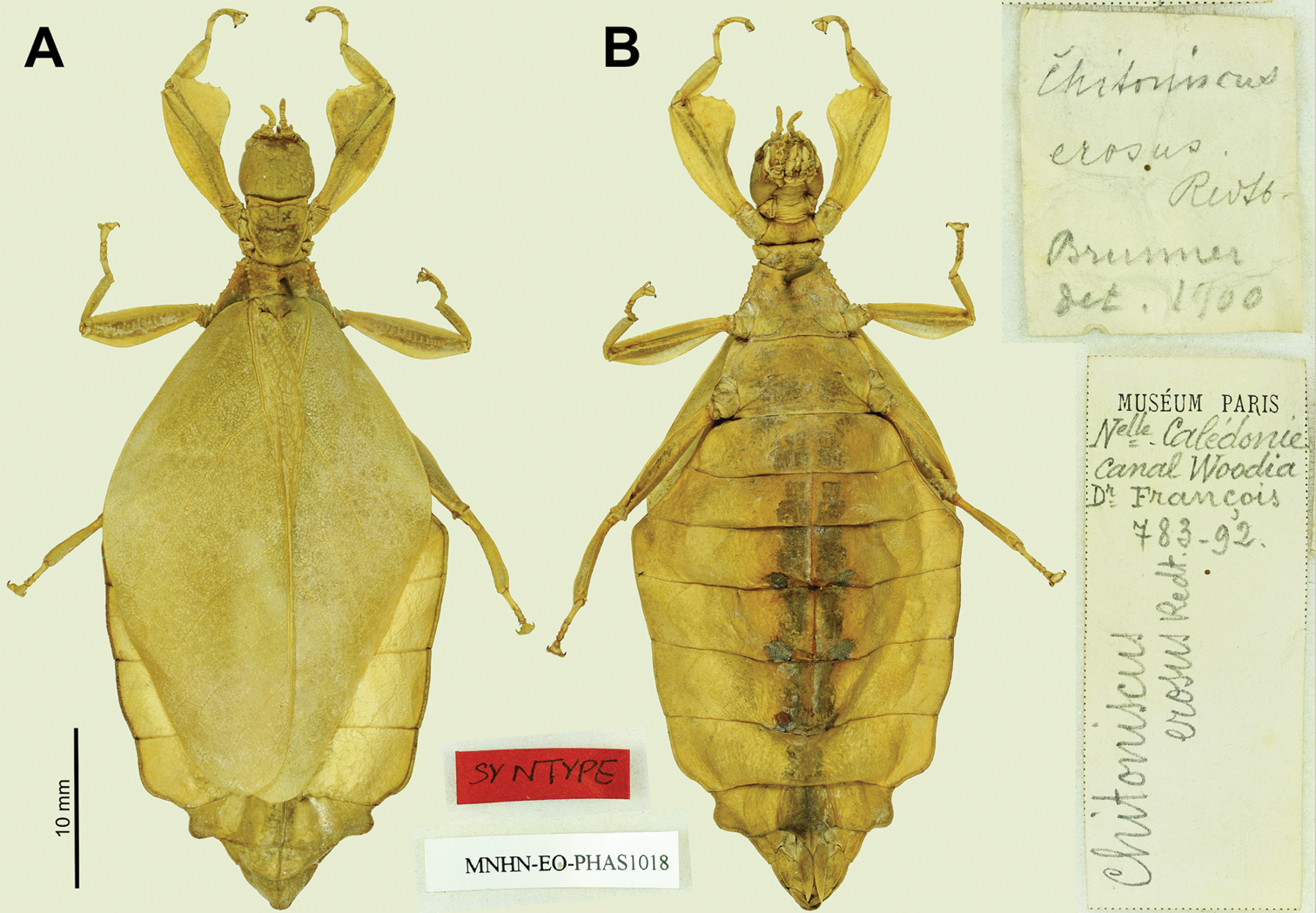 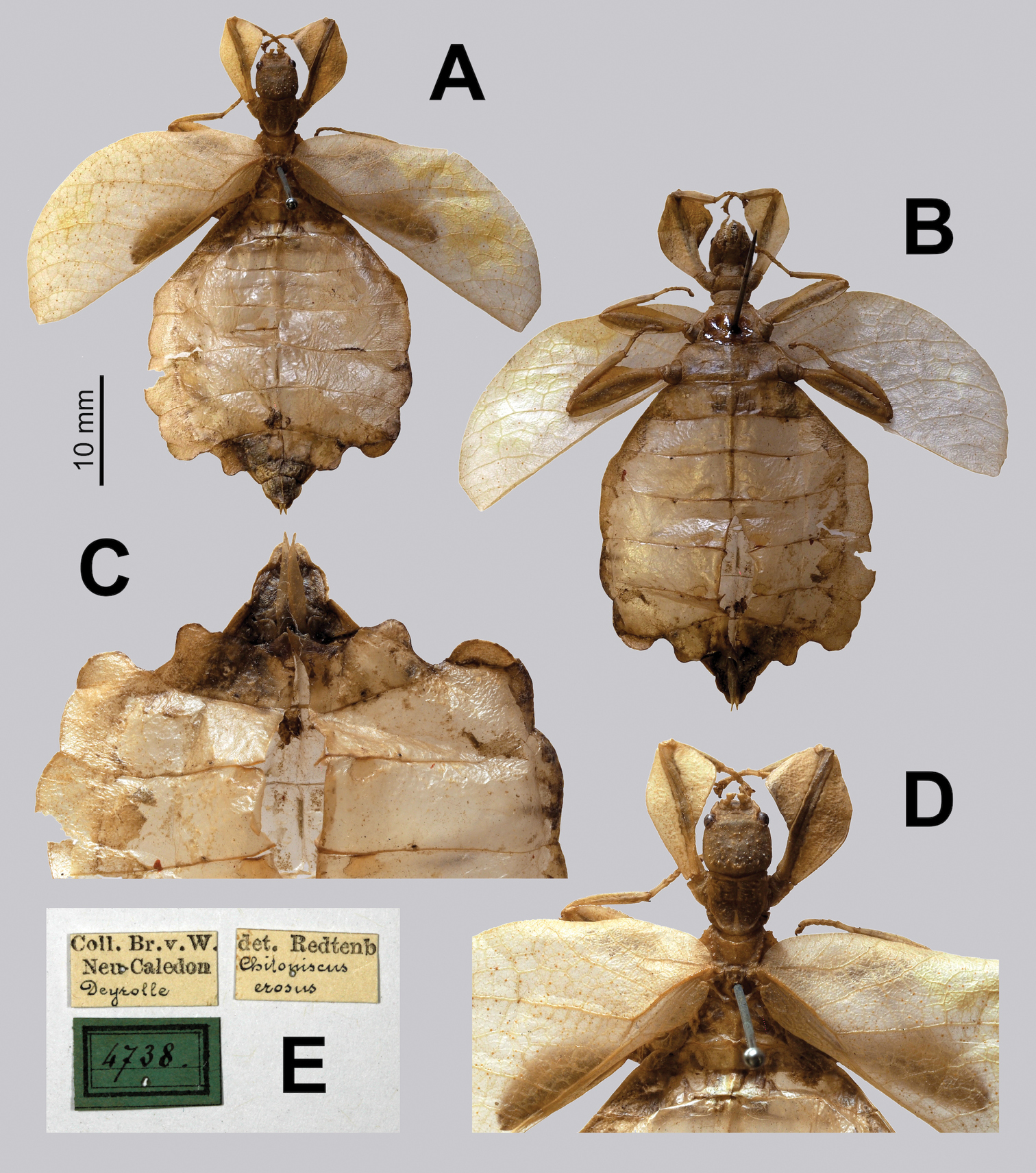 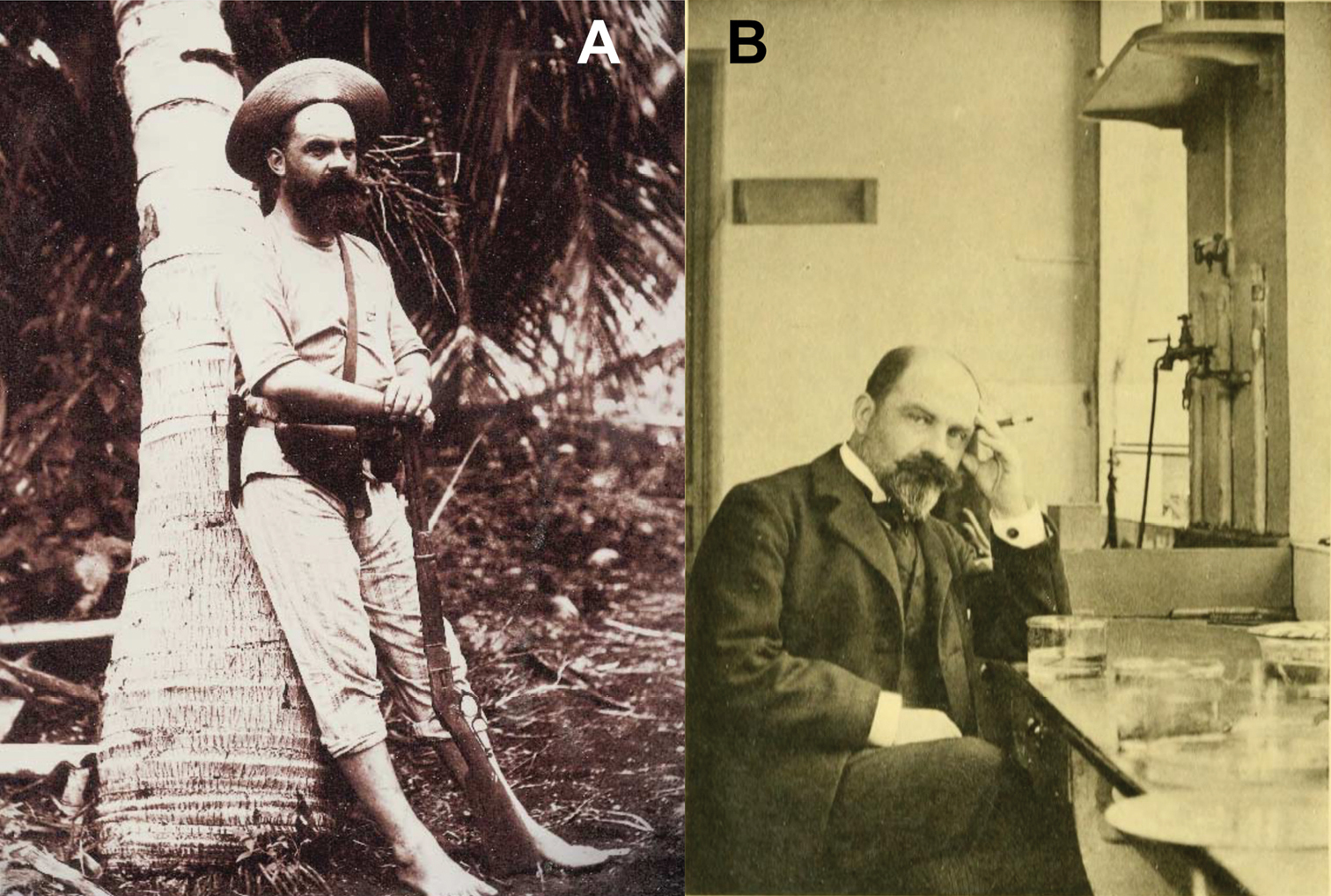 Figure 28. Philippe Francois the collector of one of the syntype Trolicaphyllium erosus comb. nov. females from within the MNHN collection A photographed in Vanuatu sometime between 1888 and 1895; used with permission from Tajan (Tajan 2002) B later in life back home in Paris, France where he reviewed many of the specimens he brought back from his expeditions (Bulletin Scientifique 1909).