Remarks. We now consider that Sciara hartii Johannsen  is Cosmosciara perniciosa (Edwards)  , based upon a repeated study of the partly destroyed hypopygium of the type species. The gonostylus has a fine hyaline spine below the apical tooth, the palpus is 1-segmented and the flagellomeres are short. Both species have also been bred from cucumbers ( Johannsen 1912; Edwards 1922). Therefore, Cosmosciara perniciosa ( Edwards 1922)  is regarded as a junior synonym of Cosmosciara hartii ( Johannsen, 1912)  .

The species is widespread and reported from numerous countries in both the northern and southern hemispheres. It is often associated with plant nurseries and is sometimes a pest. Like all greenhouse sciarids it has a population in open landscapes. In this case the larvae are phytosaprophagous and will also feed on rotting wood.

Cosmosciara hartii  is a highly exceptional species because of an extreme morphological polymorphism in both sexes. Morphotype I includes fully winged males and females, which do not differ morphologically in body structures from other winged sciarids (figs 7, 8, 9 B). Morphotype II bears extraordinary modifications of all body structures (figs 9 A, C, D). The wings are micropterous, with strongly reduced legs and halteres as well as reduced eyes, ocelli and antennae, and the thorax has reduced sclerite borders. The genitalia do not show a strong reduction in both morphotypes (they are a little bit smaller and the apical tooth on the gonostylus is somewhat shorter than in winged males). The micropterous morphotype II develops under optimal conditions of larval feeding, whereas the winged morphotype I is common in larval habitats with limited resources where migration is necessary (Steffan 1973b).

Diagnostic remarks. Winged male specimens are characterised by a reduced palp with a large basal segment lacking a sensory pit, and a very small rudimentary second segment. The flagellomeres are short (l/w index 1.2) with long and strong bristles (longer than the diameter of the basal node) and rather long necks. The fore tibia is without a distinct patch of bristles and with one short spur. The mid and hind tibiae have two short spurs. The gonostylus is pointed towards the apex, with a short subapical tooth, possessing a few fine microtrichia at the tip and 1–2 fine stiff bristles. The tegmen is wider than long and trapezoid in shape. The micropterous specimens are maggot-like, with short rudimentary wings, halteres and legs, strongly reduced eyes and shortened antennae.

Economic importance. Sometimes found breeding en masse in plant nurseries, but not usually as common as other pest species. Reported as a pest of cucumbers grown under glass near Saint Petersburg (Leningrad), Russia ( Gerbatchevskaya 1963), in the UK ( Edwards 1922; Hussey et al. 1969) and USA ( Johannsen 1912; Mohrig et al. 2013). Common in open landscapes (herb gardens, moors, alder forest and deciduous woodland (Menzel & Smith 2009). Freeman (1983) noted that it has been collected from the nest of the ant Myrmica ruginodis Nylander. One  male specimen (morphotype I) was collected in a malaise trap in Western Australia: this is the first Australian record. It has also been intercepted during the on-arrival biosecurity inspection of a consignment of taro imported from Fiji, and found in association with beetle rearing substrate intercepted from China. 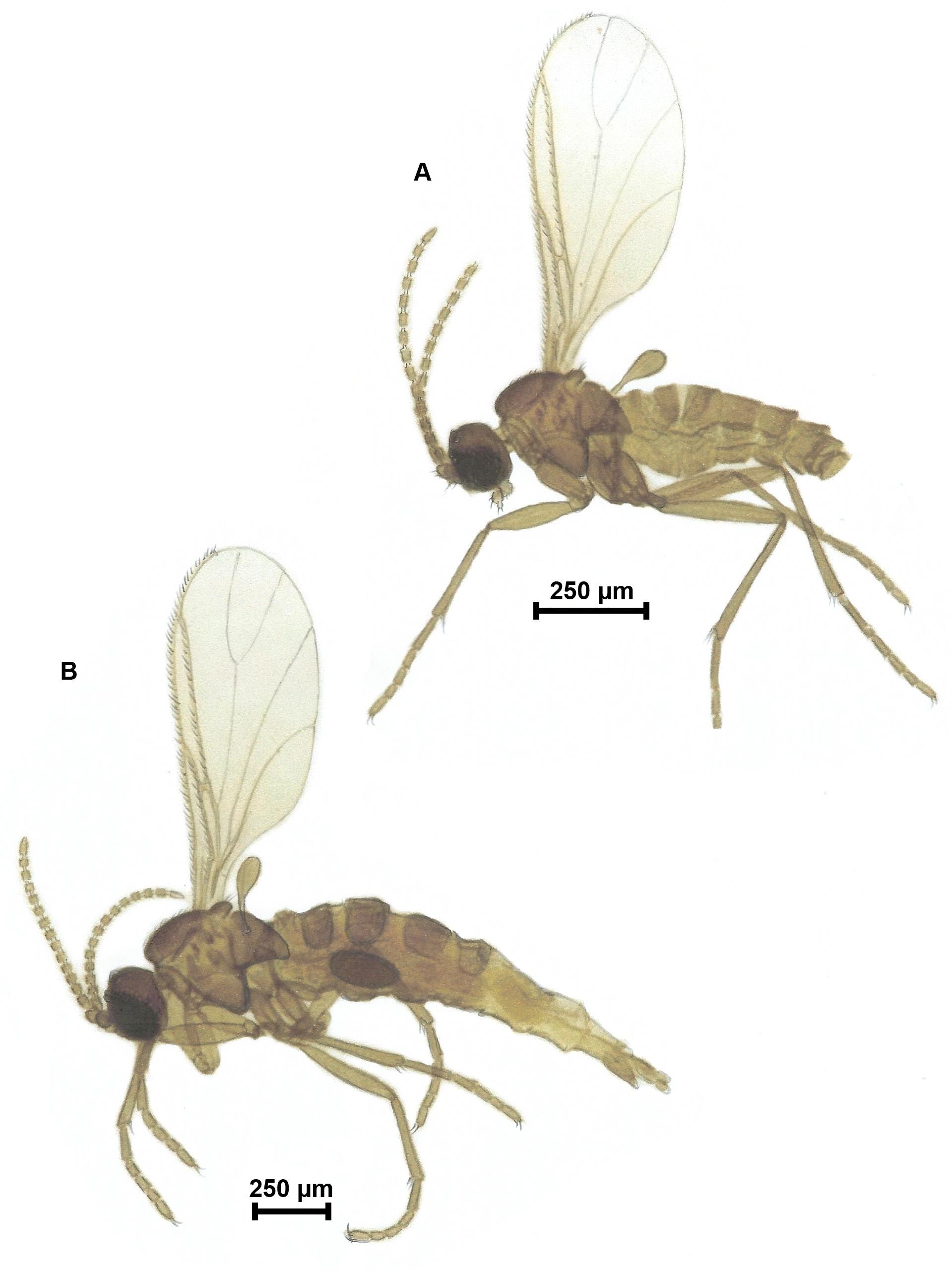 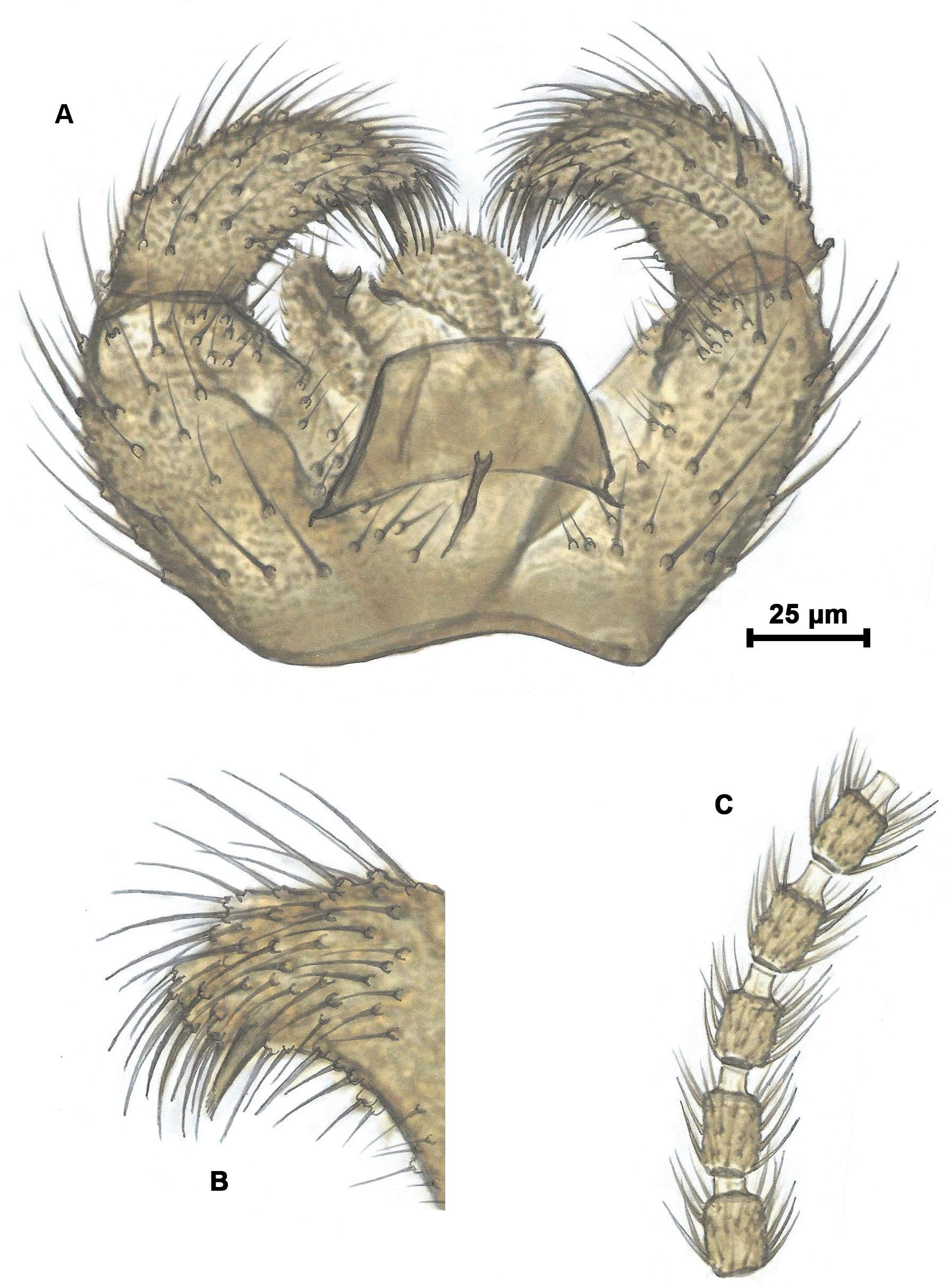