The larvae are of leptocephalus form, and the total myomere number of the leptocephalus equals that of total vertebrae ( McBride & Horodysky 2004). Predorsal (61–66) and preanal (68–72) myomeres are also reliable characters for identifying premetamorphic leptocephali ( Smith 1989). Others examining Elops from the Caribbean Sea have noted minor variations in these meristic characters ( Carles 1967; Santos-Martίnez and Arboleda 1993), indicating differences in counting methods or geographic variation.

Coloration. Living adults bright silver, particularly on sides; may be bluish-gray on back with yellowish hue on fins. Not as silvery in preservative.

Comparisons. We found no character other than counts of vertebrae that separates adult E. smithi from E. saurus ( Table 1 View TABLE 1 ). Although lateral-line scale counts appeared to be a diagnostic character, the scales are formed late in larval development so this character is indicative of latitude where larval transformation occurs instead of where spawning occurred. To demonstrate this, it can be shown that lateral-line scale counts are distinct among E. smith and E. saurus that had not been dispersed outside their typical range ( Table 1 View TABLE 1 , Fig. 2 View FIGURE 2 A), but the lateral-line scale counts are not distinct among a test collection from the southern Indian River Lagoon, Florida, which included E. smithi that had presumably been dispersed from their spawning grounds ( Fig. 2 View FIGURE 2 B). This disconnect can be explained because vertebral number is set during embryogenesis but scales are not developed until about 50 mm in the late metamorphic period ( Gehringer 1959). Thus, lateral-line scale counts will be a misleading diagnostic character when measured from specimens collected within areas of sympatry. The leptocephalus larva, common to this genus, is associated with long-distance dispersal ( McBride & Horodysky 2004), so scale counts may be problematic as a taxonomic character in other species of Elops as well. In addition, the scales of these species are small and easily displaced, further confounding their use as a taxonomic character.

TABLE 2. Data associated with fish used in the genetic analysis. Collection date and locale are listed, along with standard length (SL), and total number of vertebrae (Vert.). Fish are sorted as vertebrae morph (high vs. low-count) and haplotype. *Mismatches between phenotype and genotype are indicated with an asterisk. Locality codes are: IR = Indian River Lagoon (northern or southern regions of the lagoon), southeast Florida, CK = Cedar Key, west coast Florida, and FW = Fort Walton, panhandle Florida.

continued next page Although the mtDNA data presented here and data presented previously by Obermiller and Pfeiler (2003) indicate two evolutionary lineages, the mtDNA character was not absolutely diagnostic. In seven of 56 specimens (12.5 %), there was a mismatch between classification based on genetics and that on morphology (Table 2). Five of these individuals had morphology similar to E. smithi but haplotypes in the E. saurus lineage, and two had the reverse. These mismatches may indicate ecophenotype plasticity within species, hybridization, or retention of ancestral polymorphisms. All three phenomena have been documented in fishes (see Rocha et al. 2007). The sympatric sturgeons Scaphirhynchus albus and S. platorynchus share mtDNA haplotypes because of their recent speciation and hybridization ( Campton et al. 2000). The marine angelfishes Centropyge argi and C. aurantonotus are sister species that share haplotypes despite diagnostic differences in coloration ( Bowen et al. 2006). And the Atlantic bluefin tuna ( Thunnus thynnus ) has haplotypes derived from both Pacific bluefin ( Thunnus orientalis ) and albacore ( Thunnus alalunga ; Alvarado Bremer et al. 2005). Surveys of multiple nuclear loci have resolved these phenomena in other species and could profitably be applied to Elops . Nonetheless, given these genetic results, it is unlikely that we are observing an intraspecific, or population-level, genetic phenomenon, so we reject the hypothesis that E. smithi and E. saurus are ecophenotypes.

Distribution. Elops smithi occurs along the northern coast of South America, in the Caribbean Sea, and throughout the Bahamas; it also occurs sympatrically with E. saurus in the Gulf of Mexico and along the eastern seaboard of North America ( Smith 1989; see McBride & Horodysky [2004] for distribution maps of larvae, juveniles and adults). In addition, there are two records of Elops from Bermuda ( Linton 1907) although no resident population has been found there ( Smith-Vaniz et al. 1999). Only one specimen is available, a 181 mm SL fish ( BAMZ 1990 -083-037) with 73 vertebrae; this apparently represents a waif from the population inhabiting the Caribbean ( Smith-Vaniz et al. 1999).

Elops smithi is found in a wide range of salinities. Mature adults and early-life-history stages are found in offshore, marine habitats, where spawning presumably occurs ( Gehringer 1959; Santos-Martínez & Arboleda 1993; McBride & Horodysky 2004). Transforming larvae and subadults are found throughout estuaries, as far up as the oligohaline zone, as well as in hypersaline lagoons ( Carles 1967; McBride et al. 2001; McBride & Horodysky 2004).

Etymology. The specific epithet honors David G. Smith , of the Smithsonian Institution, for his thoroughness in examining leptocephali of Elops to reveal that two morphs were present. We recommend the vernacular name Malacho, which is already used for Elops in several countries bordering the Caribbean basin. FIGURE 2. High (or low) counts of vertebrae do not always match to high (or low) counts of lateral line scales with Elops smithi (open symbols) and E. saurus (filled symbols). Two datasets are used here: (A) individuals from Table 1 (various collections), and (B) a single collection of 25 Elops collected March 30, 1998, in the southern Indian River Lagoon, Florida. See text for full explanation as to why we consider lateral-line scale counts to be a misleading diagnostic character. 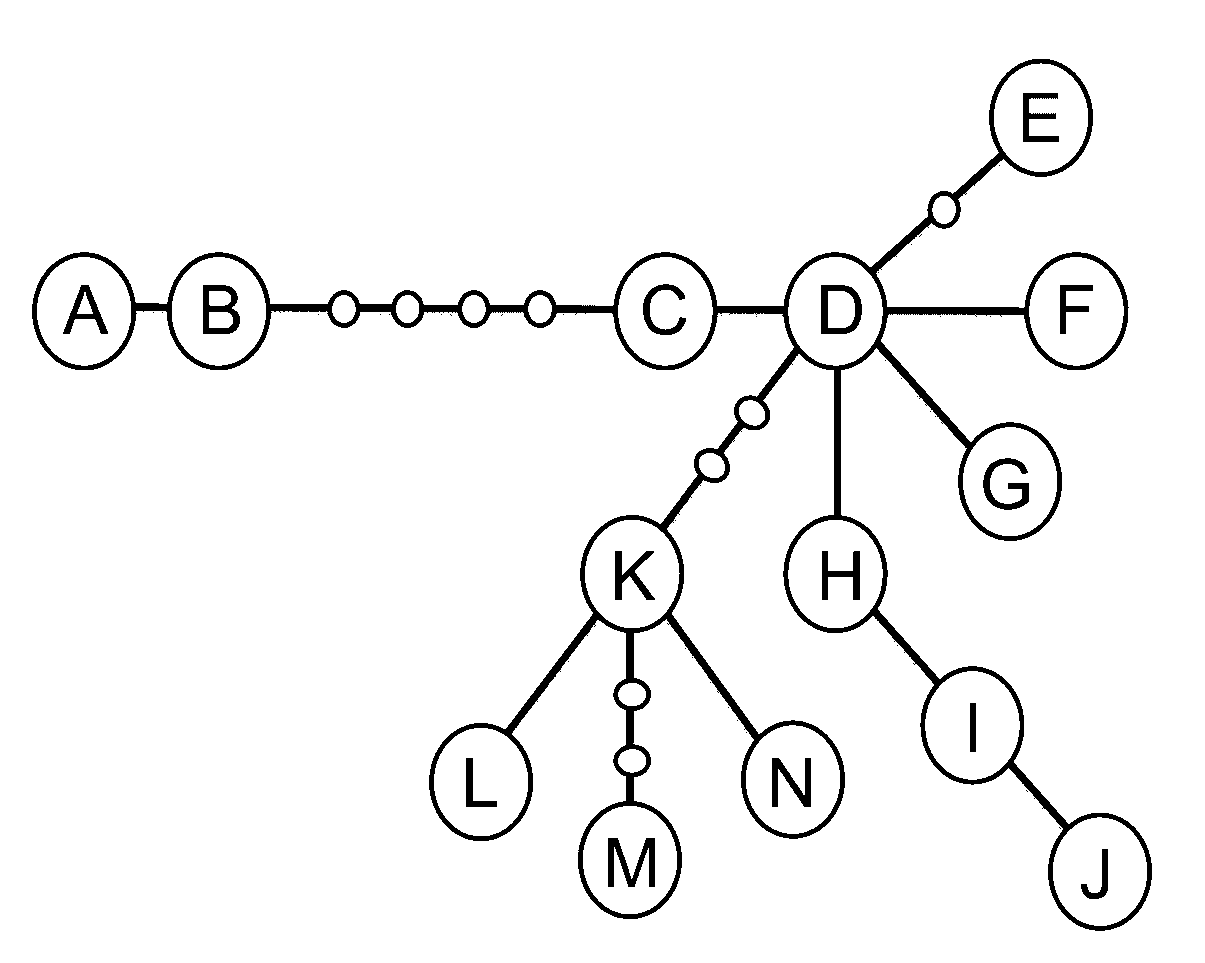 FIGURE 3. There were 14 haplotypes of Elops in two primary lineages in the western North Atlantic (see Table 2 for data source). Separation between haplotypes occurs by a single base pair substitution, or, if more than one, the number of dots (plus one) placed between each haplotype. Haplotypes A and B are E. saurus; haplotypes C-N are E. smithi (Table 2).