Habitat: In seagrass flats studded with the corals Porites  and Pocillopara, but some associated with algae on rocky shores, and a few with reef corals. From shallow waters to 22 m ( Chace 1972).

Previous records in Bahia. None.

Remarks. Another shrimp species rarely recorded from Brazil ( Christoffersen 1980; Ramos –Porto et al. 1995). Udekem d’Acoz (2000) redescribed L. intermedia  based on topotypical specimens from the Dry Tortugas, Florida, also reviewing the previous records of this species. Comparison of samples collected in the Azores with the topotypical material, allowed him to establish that Azorean material attributed to L. intermedia ( Rathbun, 1901)  is in fact L. seticaudata (Risso, 1816)  , a similar, warm-water species. According to the author, the records from the Galapagos and Ascension islands (see Chace 1972; Manning & Chace 1990) are also questionable and are based on a misidentifications.

In general appearance, our material (ovigerous female, 7.1 mm CL) agrees with the description provided by Udekem d’Acoz (2000). The rostrum has 7 dorsal (3 behind the orbit) and 2 ventral teeth ( Figs. 5View FIGURE 5 A, B). The pleuron of pleonite 4 is rounded in its terminal portion, while pleonite 5 has a developed terminal spine ( Fig. 5View FIGURE 5 D). The telson tip has 6 terminal spines, and their position and length are as described by Udekem d’Acoz (2000). The stylocerite overreaches the outer border of the basal antennular peduncle ( Fig. 5View FIGURE 5 B). The accessory branch of the outer antennular flagellum consists of 4 segments ( Fig. 5View FIGURE 5 C). The merus of pereiopod 3 is provided with 5 lateral and 3 ventral spines ( Fig. 6View FIGURE 6 C); pereiopod 4 with 4 lateral and 1 ventral ( Fig. 6View FIGURE 6 D); and pereiopod 5 with only 2 lateral spines ( Fig. 6View FIGURE 6 F). The propodus of pereiopod 3 has 9 ventral spines ( Fig. 6View FIGURE 6 C). The dactyli of pereiopods 3–5 are armed with 5 spines ( Fig. 6View FIGURE 6 E). However, our specimen differs in some important aspects from typical specimens of L. intermedia  . The merus of pereiopod 2 is subdivided in 16 segments, while the carpus has 23 ( Figs. 6View FIGURE 6 B). Therefore, the number of segments of the carpus is less than that reported by Udekem d’Acoz (2000): 25–31, more commonly 28–30. Also, only 1 ventral spine is present on the ventral margin of pereiopod 4, whereas in the topotypical material examined by that author, 2 (occasionally 3) spines are found. Finally, the telson tip is rounded, not ending in a terminal blunt apical tooth as indicated by Udekem d’Acoz (2000). The closest related species to L. intermedia  are the warm –temperate L. seticaudata  and L. nilita Dohrn & Holthuis, 1950  from the northeast Atlantic and the Mediterranean. The other species currently recognized in the Atlantic are not closely related. Lysmata intermedia  can be distinguished from the other two species mainly by the fewer segments in the accessory branch of the outer antennular flagellum (see Udekem d’Acoz 2000 for more details). The differences between our material and those described for topotypical specimens of L. intermedia  suggest the possibility that our specimen belongs to a closely related, undescribed species of Lysmata  .

The occurrence of this species in Camamu Bay partially fills the gap in its range along the northeastern and eastern Brazilian coast, between the states of Pernambuco and Espírito Santo. 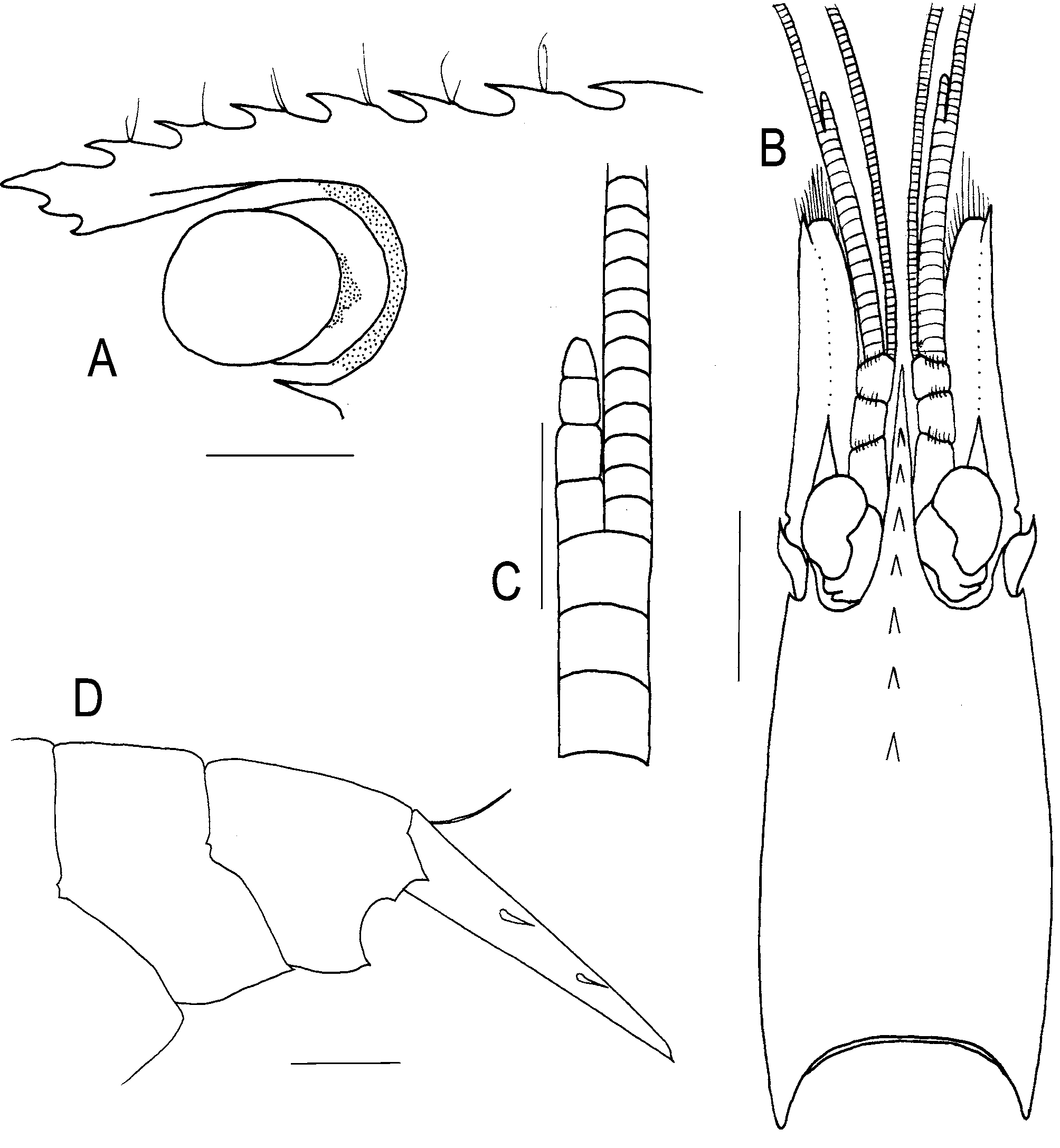 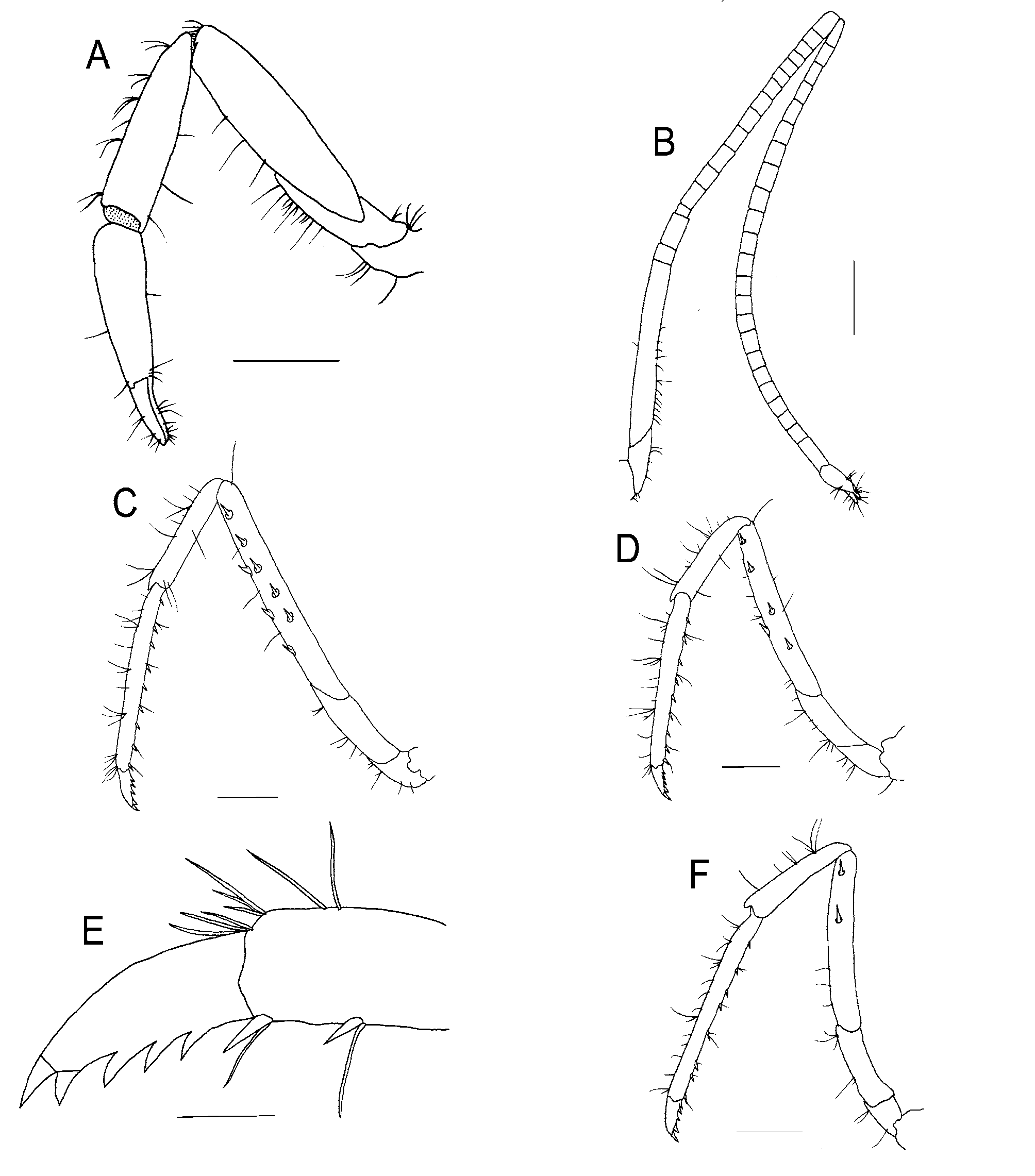