A 1 ( Figure 5 View FIGURE 5 A, B). First segment long and bare. Second segment with no dorsal spines and annulated, pappose dorsal bristle reaching 1 / 3 of following segment. Third and fourth segment fused; third with annulated, pappose dorsal bristle reaching 1 / 3 of following segment and one shorter and bare ventral bristle (not exceeding distal margin of 3 + 4 segment). Fourth segment with bare, annulated dorsal bristle not reaching distal end of following segment, and two bare, annulated bristles ventrally (one only reaching distal margin of following segment, other almost 1.5? times longer). Fifth and sixth segments fused. Bristle of fifth segment long, annulated and bare; seta on sixth segment short, also bare. Seventh segment: a-bristle not so short (about three times longer than sixth segment’s bristle); b-bristle slender, with one sensory filament, and about 1 / 3 longer than a-bristle, this bristle with pointed, sensory-like tip; c-bristle as long as bristle of fifth segment. Eighth segment: d- and e-bristles equally long, bare and shorter than c-bristle; f- and g-bristles slightly shorter than fifth segment bristle, both annulated and gbristle with one sensory filament. All bristles except a-, b-, e- and d- with blunt tips.

L 5 ( Figure 6 View FIGURE 6 C). Lobe one with one short bristle; lobe two with three bristles (one longer than other two; all armed with tiny setulae); lobes 3–5 fused and with total of 10 bristles, all annulated and with setulae, except most dorsal short bristle. Entire appendage hirsute.

Remarks and affinities. Based on the shape and ornamentation of the shell there is only a handful of species with which E. hanguk   may be related to. Namely, the majority of Eusarsiella   species have different shell morphologies and they are either smooth, or have ridges, lateral projections, nodules, different shapes of the postero-dorsal extension, different lengths of the caudal process, etc. The following eight species (in alphabetical order) have a very similar carapace shape and ornamentation to the new Korean species: E. asciformis ( Hall, 1987)   , E. fallomagna Kornicker, 1994   , E. falx Kornicker, 1992   , E. magna Poulsen, 1965   , E. microthrix ( Chavtur, 1983)   , E. reticulata ( Hall, 1987)   , E. springthorpei ( Hall, 1987)   , and E. tampa Kornicker & Grabe, 2000   .

Three species described from the Great Barrier Reef, Eusarsiella asciformis   , E. reticulata   , and E. springthorpei   , have a very similar carapace shape to E. hanguk   . The first species differs from E. hanguk   by a slightly finer ornamentation, the presence of three (instead of two) bristles ventrally on the fourth segment of A 1, and by the presence of three and one (instead of three and three) bristles proximally on L 7. The line drawings of E. asciformis’ carapace (see Fig. 11 View FIGURE 11 A in Hall 1987) show a very similar caudal process as in E. hanguk   , while the SEM photos (see Fig. 13 View FIGURE 13 A in Hall 1987) show a much shorter, almost non-existent process. It remains to be tested if this is a variability or Hall (1987) was dealing with two species. Eusarsiella reticulata   also has a slightly shorter caudal process. The main difference between this and the new species is in the appearance of the claws on the Md. They are much stronger and thicker than in E. hanguk   . There are also other differences, such as the chaetotaxy of the L 7. Finally, E. springthorpei   differs from the new species by a slightly higher postero-dorsal extension, three setae ventrally on the fourth segment of A 1, and a different chaetotaxy of the L 7 (with four and five proximal bristles).

Eusarsiella fallomagna   was described from New South Wales ( Australia) ( Kornicker 1994), and has a very similar carapace shape, ornamentation, and postero-dorsal extension like E. hanguk   but it has more bristles on the caudal infold, three setae ventrally on the fourth segment of A 1, and five or six bristles proximally on the L 7.

A species from Mozambique ( Kornicker 1992), E. falx   , has a similar postero-dorsal extension and similar basic ornamentation, but in addition to fossae its surface is densely covered with small spines. There are some other differences between it and E. hanguk   and they mostly refer to the chaetotaxy of L 5 to L 7.

Eusarsiella magna   was described from southeast Australia ( Poulsen 1965) and has almost identical morphology of the carapace with E. hanguk   , and the two species practically only differ in the presence of three (instead of two) bristles on the fourth segment of A 1 and more (seven or eight) bristles proximally on the L 7.

Eusarsiella microthrix   , described from Vietnam ( Chavtur 1983), seems to have a similar carapace shape like the new species, but according to the drawings provided in the original description it also appears that the shell was decalcified and slightly deformed, and there is an apparent presence of some short ridge-like structures which may be a result of shell deformation. However, the new species can easily be distinguished from E. microthrix   by a different length ratio between the claws on the UL (in the new species the claws are much more slender), and the presence of three and three (instead of two and two) bristles proximally on the L 7.

Finally, E. tampa, described from the Gulf of Mexico ( Kornicker & Grabe 2000), has more bristles on the infold of the caudal process, a shorter a-bristle on the A 1, only two (instead of three) bristles on the second endite of the L 5 and two and one bristle proximally on the L 7. 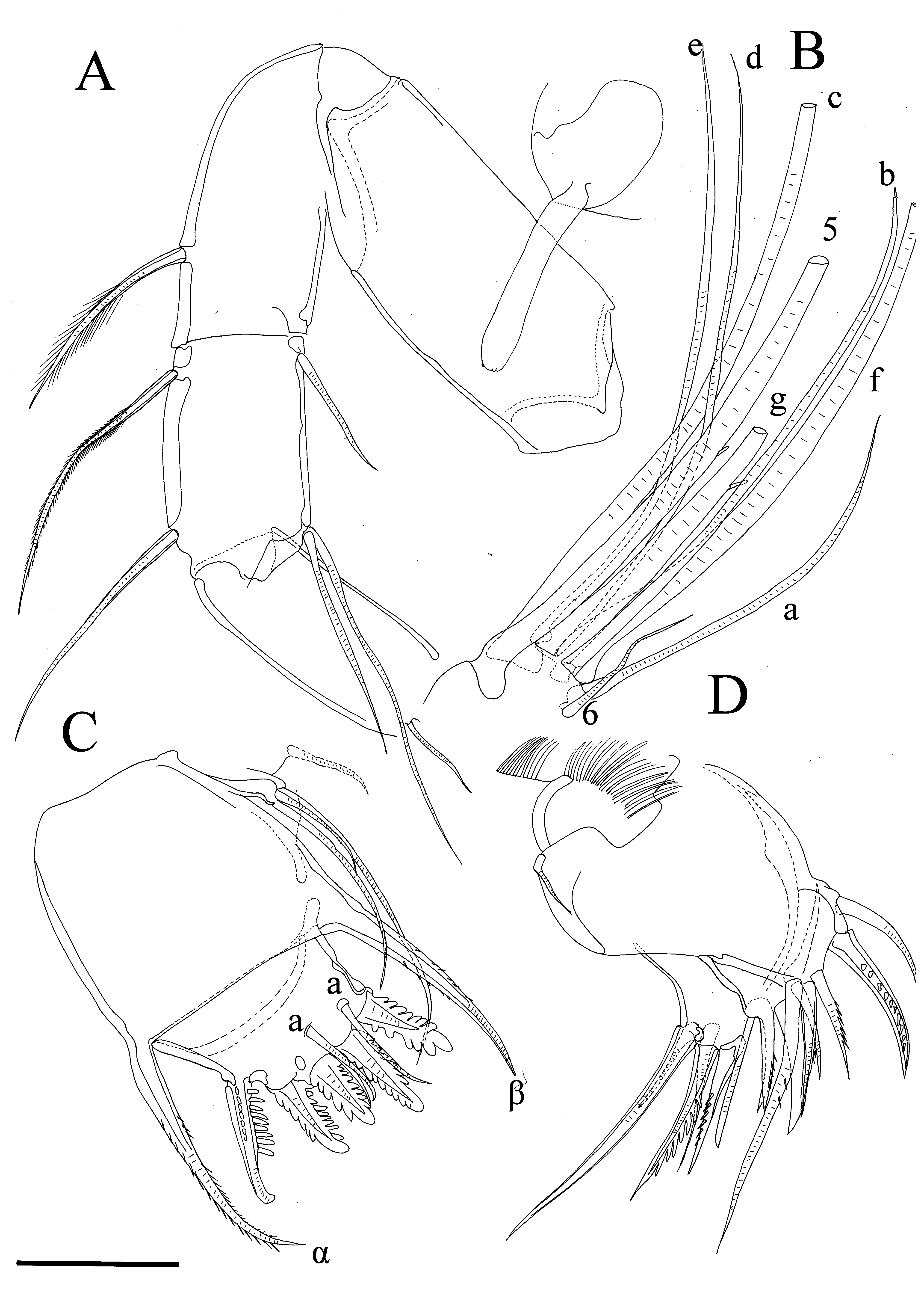 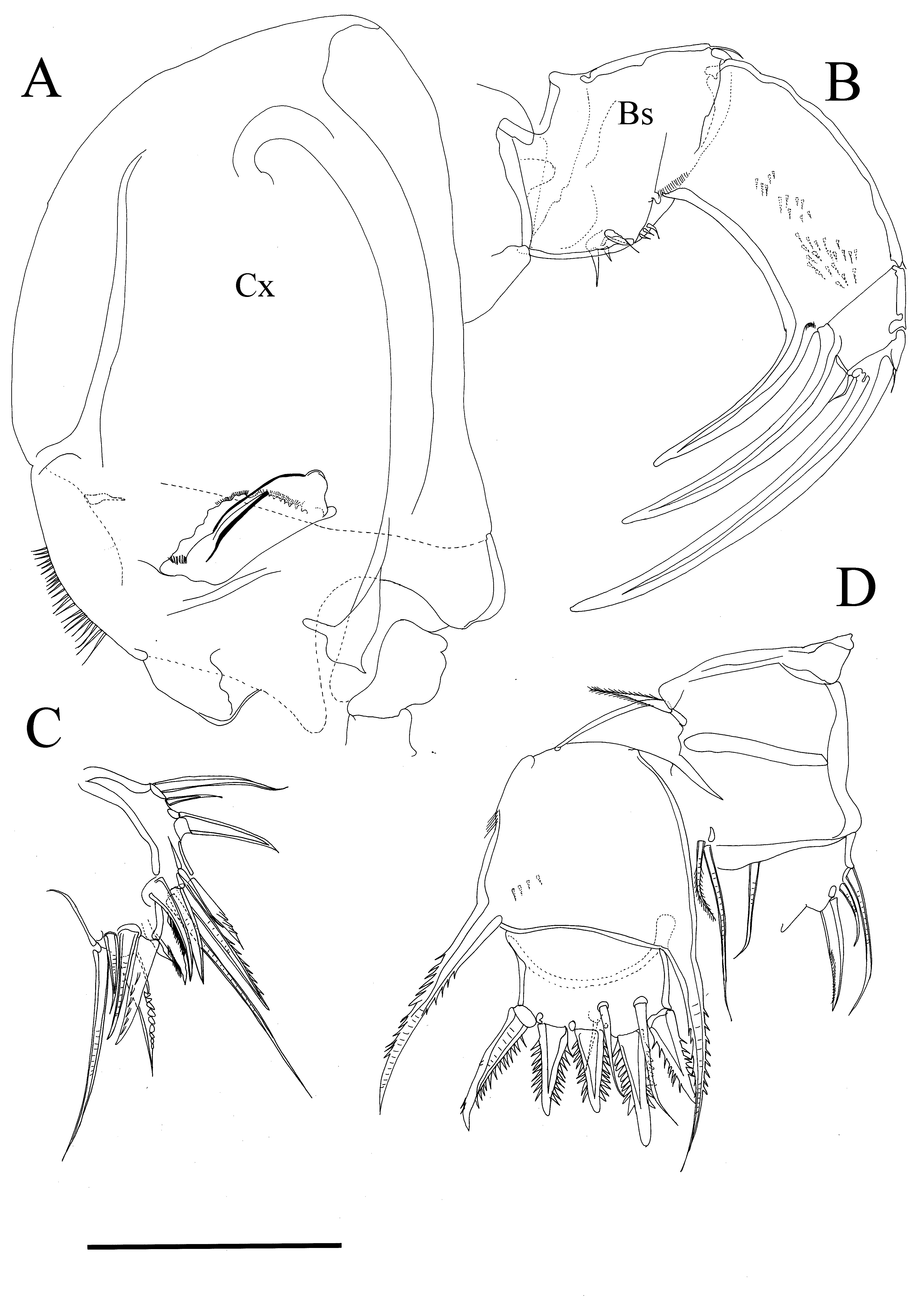