Diagnosis. Cetopsis fimbriata can be distinguished from all of its congeners by the combination of the presence of an eye, a conical teeth on the vomer and dentary, the rounded posterior nares that is distinctly separated from the contralateral nares by a distance greater than the width of the posterior nares, the presence of a dark, distal, margin along the anal fin, the dark distal margin of the pectoral fin, the absence of a dark humeral spot, the absence of a posteriorly-rounded, variably-developed, bilobed patch of dark pigmentation at the base of the caudal fin, and the presence of 46 to 48 total vertebrae, 25 to 28 total anal-fin rays, and 20 to 22 branched anal-fin rays.

Head triangular in lateral view and broadly rounded anteriorly. Dorsal profile of head convex from tip of snout to vertical through posterior nares and slightly convex from that point to posterior of nape. Ventral profile of head gently convex. Profile of snout in dorsal view obtusely triangular overall and rounded at tip. Portion of head posterior of nares with lateral profiles running nearly in parallel from dorsal view. Dorsal surface of posterior portion of head without externally apparent enlarged jaw musculature.

Pelvic fin moderate, its distal margin slightly convex, with second branched ray longest. Tip of adpressed pelvic fin barely reaching middle of SL and falling slightly short of vent. Insertion of pelvic fin located along vertical through posterior terminus of base of dorsal fin. Medial most pelvic-fin ray with membranous attachment to body for basal two-thirds of its length.

Coloration in alcohol. Very dusky over most of head and body, becoming progressively lighter ventrally with overall pigmentation pattern often somewhat marmorated. Underside of head and abdomen without dark pigmentation.

Sexual dimorphism. Mature males of Cetopsis fimbriata have very elongate filaments on the distal portions of the first rays of the dorsal and pectoral fins; with such extensions distinctly more well developed than are the filaments that are present in conspecific females. The anal-fin margin in mature males of C. fimbriata is convex, contrary to the straight margin of the fin that is present in all examined females and immature males of the species.

Distribution. Cetopsis fimbriata is apparently endemic to the río Nercua, a tributary of the río Truando that flows into the río Atrato basin of the Caribbean Sea versant of northwestern Colombia ( Fig. 19 View Fig ).

Remarks. It is uncertain whether the citation of Hemicetopsis amphiloxa from the río Atrato system by Mojica-C. (1999: 565) referred to Cetopsis amphiloxa or to C. fimbriata , or a combination of those two species. Both of these species occur within the río Atrato basin, albeit in distinctly separate portions of that drainage system. In the absence of information as to the locations within the río Atrato basin from which the specimens examined by Mojica-C. (1999) originated, it is premature to associate that citation with a particular species. 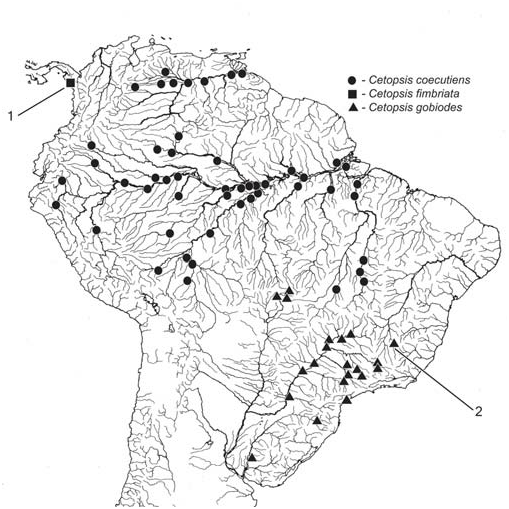