Diagnosis. Cetopsis caiapo can be distinguished from all of its congeners by the combination of the presence of an eye, the large conical teeth on the vomer and dentary, the rounded posterior nares that is distinctly separated from the contralateral nares by a distance greater than the width of the posterior nares, the dark humeral spot, the absence of a posteriorly-rounded, variably-developed, bilobed patch of dark pigmentation at the base of the caudal fin, the absence of a band of dark pigmentation along the distal portions of the anal fin, and the possession of 44 total vertebrae, 29 caudal vertebrae, 22 total anal-fin rays, and 18 branched anal-fin rays.

Pelvic fin short, rounded, with first branched ray longest. Pelvic-fin insertion located anterior to middle of SL and posterior to vertical through posterior terminus of base of dorsal fin. Tip of adpressed pelvic fin extending beyond middle of SL, but falling short of vent. Medial most pelvic-fin ray with membranous attachment to body for basal one-half of its length.

Distribution. Cetopsis caiapo is only known from one locality in the rio Tocantins basin, Brazil ( Fig. 12 View Fig ).

Etymology. The species name, caiapo , is in reference to the Caiapo Amerindian tribe that historically inhabited the area of the rio Tocantins drainage system from which the holotype of the species originated. 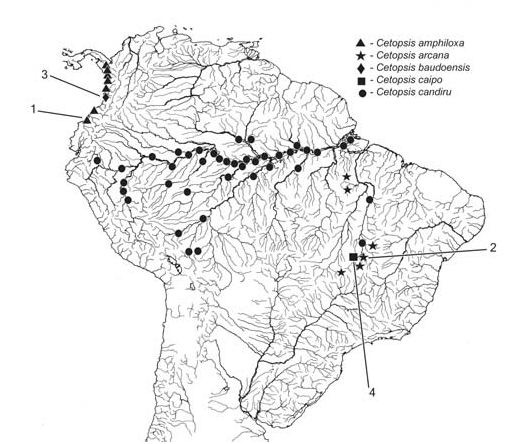