Diagnosis. This species is a Tetranychus sensu  stricto assigned into the ninth group as defined by Flechtmann and Knihinicki (2002). Females bear four tactile setae proximal to the proximal pair of duplex setae and the female empodia are without a dorsomedian spur. Among Tetranychus  (T.) belonging to this group, this species is distinctive by the shape of the aedeagus which has a shaft slightly upturned ending in a knob whose axis forms an acute angle with the shaft’s axis.

Legs. Empodium I bifid, each side composed of one claw-like digit. Large mediodorsal spur present, about three-quarters length of empodium, difficult to see in perfect lateral view because concealed by empodial claws. Empodia II, III and IV without dorsal spurs and with three pairs of proximoventral hairs. Leg setal counts as follows:

Gnathosoma. Palptarsus spinneret about one and a half as long as broad. Peritreme hooked distally.

Legs. Empodia I –IV bear three pairs of proximoventral hairs and no spur was observed. Leg setal counts as follows:

Etymology. The species designation, “ occultaspina  ”, is taken from Latin adjective and noun meaning hidden spine, and refers to the spur of male empodium I which is difficult to see when the empodium is observed in a perfect lateral view.

Biological observations. The adult females are red in colour to dark red, darkening with age and produce silk. The adult males are yellowish brown and the eggs are pale amber in colour turning into dark orange/brownish-red before hatching.

neocaledonicus  and T. puschelii  by the shape of its aedeagal knob which is more flattened with a dorsal margin not indented but undulated. It can be separated from T. afrindicus  and T. papayae  according to the shape of its aedeagal anterior projection which is rounded whereas it is angulate in the two others species and by the angle formed between the knob axis and the shaft’s axis. In T. ismaili  aedeagal projections are acute whereas rounded in T. occultaspina  .

Additional solenidia are sometimes present on tibia I and tarsus I of T. occultaspina  : one to two on tarsus I (proximal to the proximal duplex) and one to two on tibia I. This unusual chaetotaxy is not specific to T. occultaspina  . Indeed, hypertrichous forms have already been reported in some strains of Tetranychus  species belonging to the 9 th group ( Auger et al. 2013). It is known to occur in the two colour forms (green and red) of Tetranychus urticae Koch  and also in Tetranychus gloveri Banks  (e. g. McGregor (1950); Boudreaux (1956, 1958); Zhang & Jacobson (2000 )). 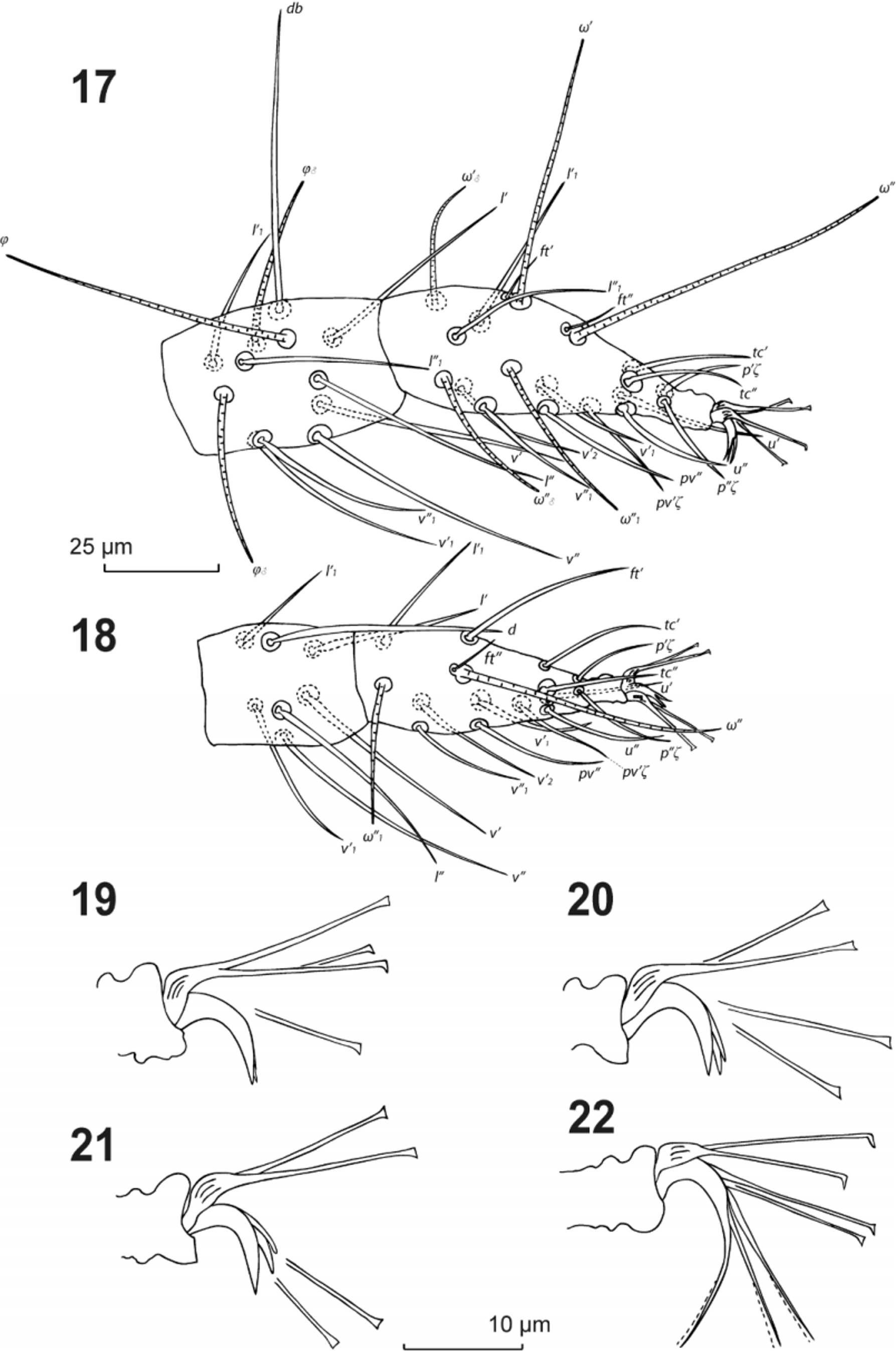 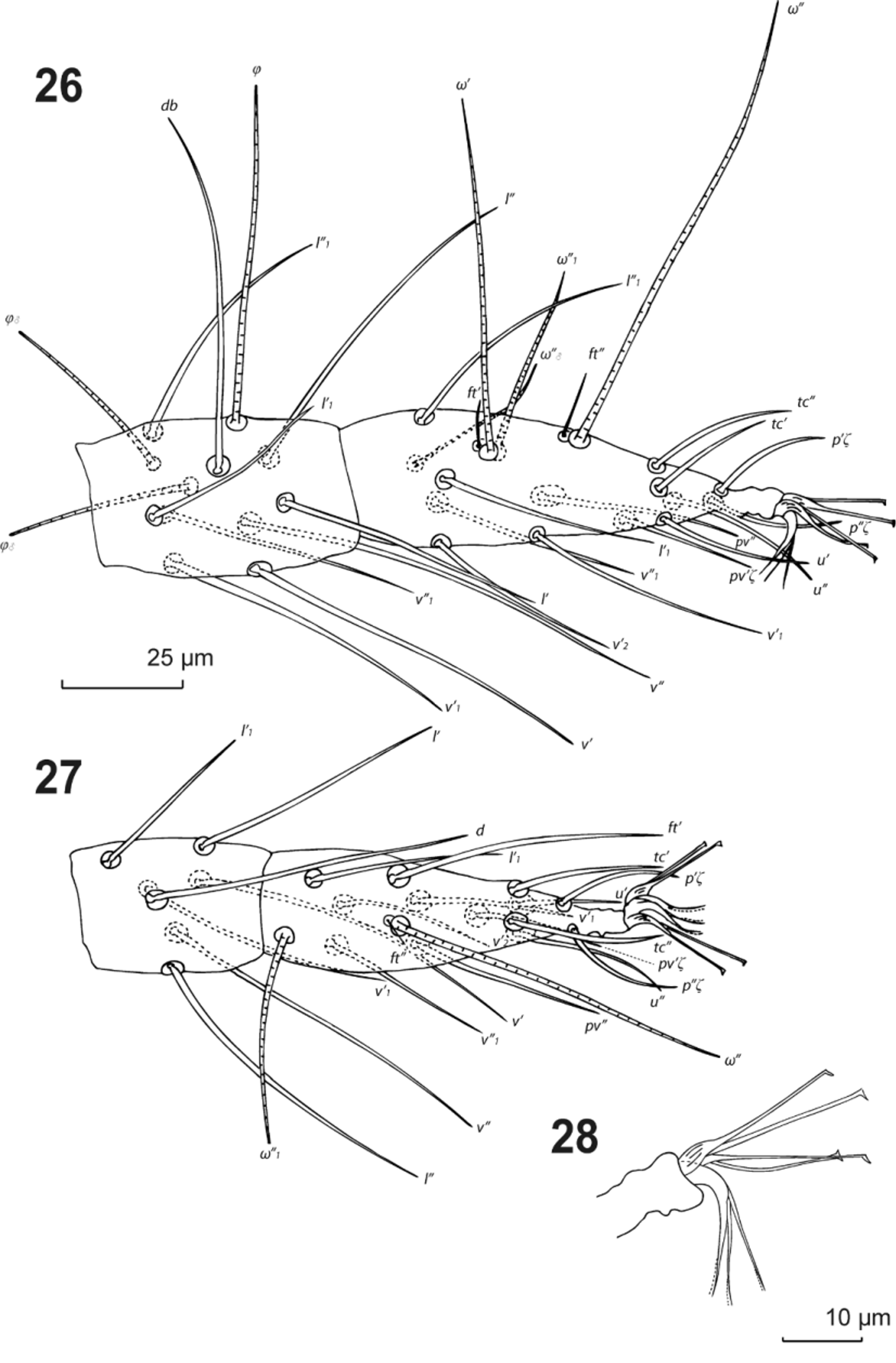 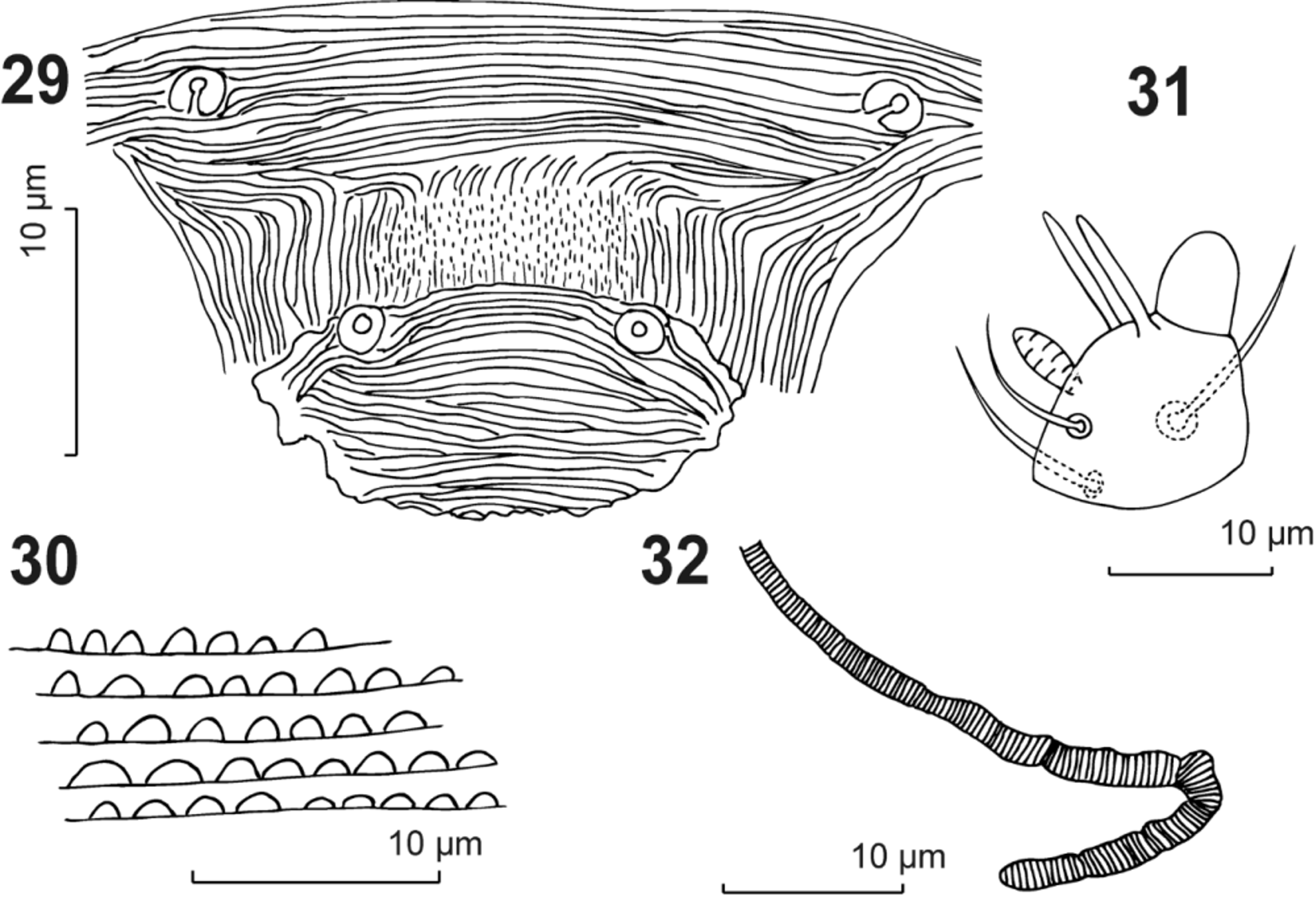