Diagnosis: Leptohyphes sabinas larvae can be distinguished from other species of Leptohyphes in North and Central America by the following combination of characters: (1) body coloration generally pale brown to brown (in freshly preserved specimens) with limited and diffuse black maculation; (2) abdominal terga with a limited number of setae present on the sublateral margins (terga 2 through 5 with zero to four setae each; terga 6 and 7 each with four to twelve setae; terga 8 through 10 with zero to ten setae each); (3) vertex of head with a complex pattern as in L. zalope , sometimes much reduced; and, (4) dorsal surface of meso- and metafemur generally with less than 10 stout setae present on the median elevated ridge. Adults are very similar to other described Leptohyphes adults from North and Central America. The presence of a pale yellowish abdomen with extensive grey maculation can help separate this species from other adults.

Distribution: Leptohyphes sabinas is known from south-central Texas in the United States (Burks, 1953; Traver, 1958), throughout Mexico ( Allen, 1967; Allen and Brusca, 1973; Allen, 1978), Guatemala ( Allen, 1967) and Costa Rica ( Lugo-Ortiz and McCafferty, 1995). Larvae have been collected from a wide variety of streams at various elevations. Mature larvae have been found throughout much of the year, indicating an extended emergence for this species.

Discussion: Leptohyphes sabinas was described by Traver (1958) based upon a male “which has almost completely shed the submarginal cuticle”, and male and female subimagos from Nuevo Leon, Mexico. Based upon this material, Traver considered the species to have dissimilar propretarsal claws, and considered it unique based on this and color characters. In all known male adults of Leptohyphidae , however, the propretarsal claws are similar, but dissimilar in the subimago. This was evidently unknown to Traver at the time, leading to her false conclusion.

The larval stage was described by Allen and Brusca (1973) as L. consortis . Allen (1978) noted that L. consortis was indistinguishable from larvae that were evidently part of the original type series of L. sabinas , but had not been previously published as such.

Leptohyphes consortis was described by Allen and Brusca (1973) on the basis of two larvae from Vera Cruz, Mexico. The holotype is in good condition, missing only the left proleg and right mesoleg. It has mostly faded, now pale yellow in color, and not matching any of the colors or patterns given in the original description. The single paratype specimen has the abdomen missing. It was apparently mounted on a slide, as indicated as such by a note in the vial. No associated slide, however, can be located. The figure used by Allen and Brusca (1973, Figure 30 View FIGURES 26–31 ) to illustrate the arrangement of setae on the abdominal terga of L. consortis does not resemble the holotype. The abdominal terga of L. consortis is mostly glabrous, with a few, scattered setae on the sublateral margins of abdominal tergum 1-8. In addition, only a few elongate setae are present on the posterior margin of the abdominal terga, not as numerous as what was illustrated in the figure. Figure 30 View FIGURES 26–31 from Allen and Brusca (1973) was also used by Allen (1978) to describe the new species Leptohyphes zelus ( Allen, 1978) , to which the figure is most appropriate. It is possible that Allen might have confused the undescribed L. zelus larvae (which had been collected by Allen in 1966, before the description of L. consortis was published) with L. consortis when he was originally describing the species and never corrected the figures in the literature.

Leptohyphes castaneus was described by Allen (1967) on the basis of larvae collected in southwestern Guatemala. There was no discussion on how this species differed from others in the genus. The types of L. castaneus are in excellent condition, undissected, and intact; however, the two paratype larvae are faded to a pale yellow. The holotype retains the brown coloration described for the species. All specimens of the type series have a few, scattered setae present on the lateral margins of the abdominal terga, as described by Allen (1967). Allen (1967) reported that the metafemur is 65% longer than the profemur; however, Allen (1978) reported the metafemur to be 35% longer than profemur. Re-examination of this character clearly shows that the metafemur is 65% longer than the profemur, as is typical of most larval Leptohyphes .

Allen (1978) distinguished L. sabinas from L. castaneus based upon darker brown markings and claws with five to seven marginal denticles, as opposed to four to six marginal denticles and unicolorous brown coloration on L. castaneus . Both these characters are variable for L. sabinas , with larvae possessing between four and six marginal denticles (with one submarginal denticle), and abdominal tergal coloration varying from yellowish brown to brown. Studies of extensive series has shown that colors and color patterns are variable, often changing with maturity, seasonality, and gender. Female larvae are typically much larger and more darkly colored than male larvae. Comparison of the types of these species clearly show them to be conspecific.

Leptohyphes tarsos Allen and Murvosh (1987) was described from Sonora, Mexico, on the basis of a small series of larvae. It was considered different from L. sabinas , and other species of Leptohyphes on the basis of markings around the compound eyes and brown median macula on the abdominal terga. Examination of the type series does not show any markings around the compound eyes that are not found in other Leptohyphes . In addition, characters such as body coloration and maculation, arrangement of setae on the abdominal terga, arrangement of denticles on the claws (four to six marginal and one submarginal denticle) are no different than that of L. sabinas . No features were found unique to L. tarsos , and no features, or combinations thereof, were found that could separate it from L. sabinas . Thus, L. tarsos is considered a junior synonym of L. sabinas . 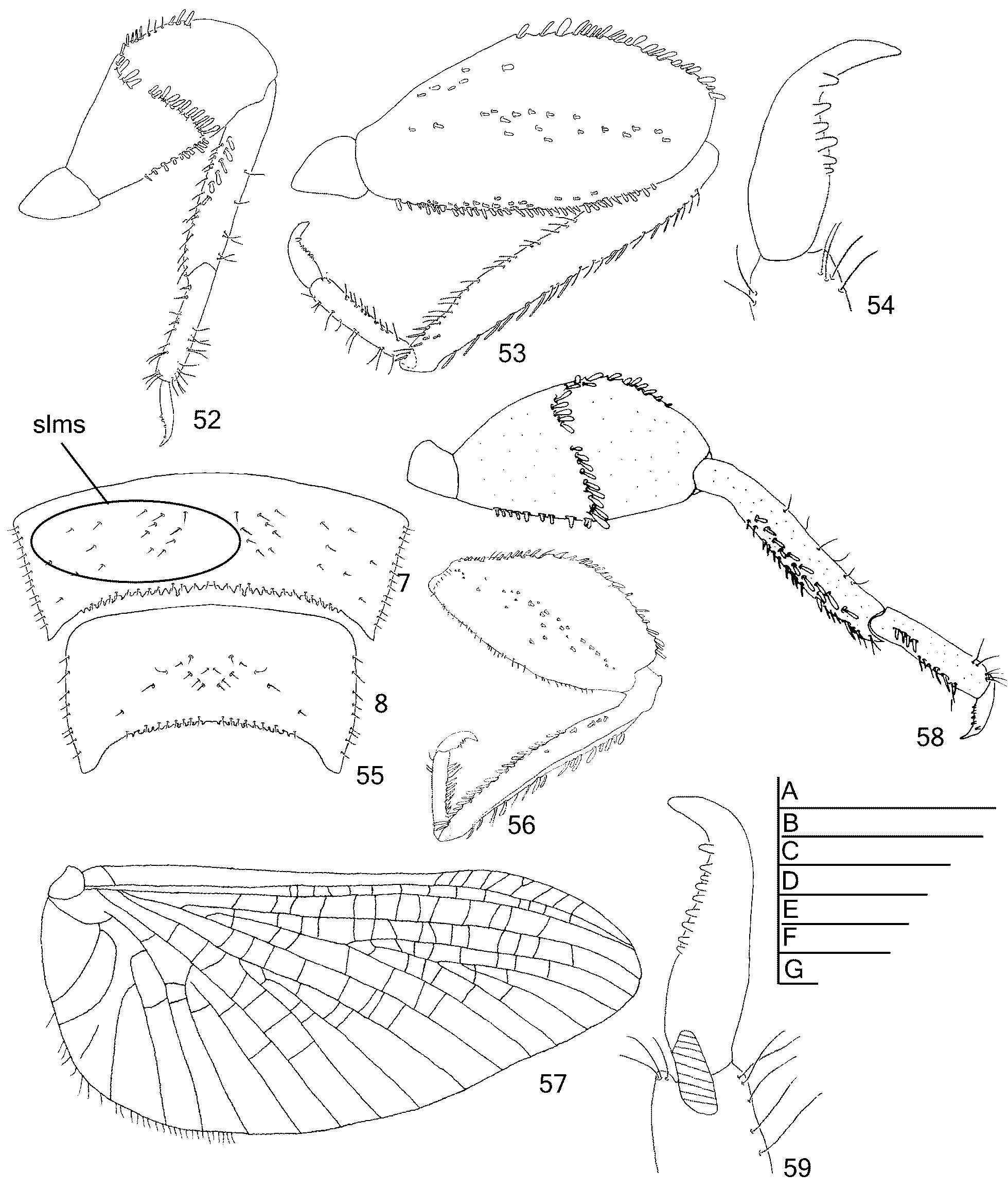 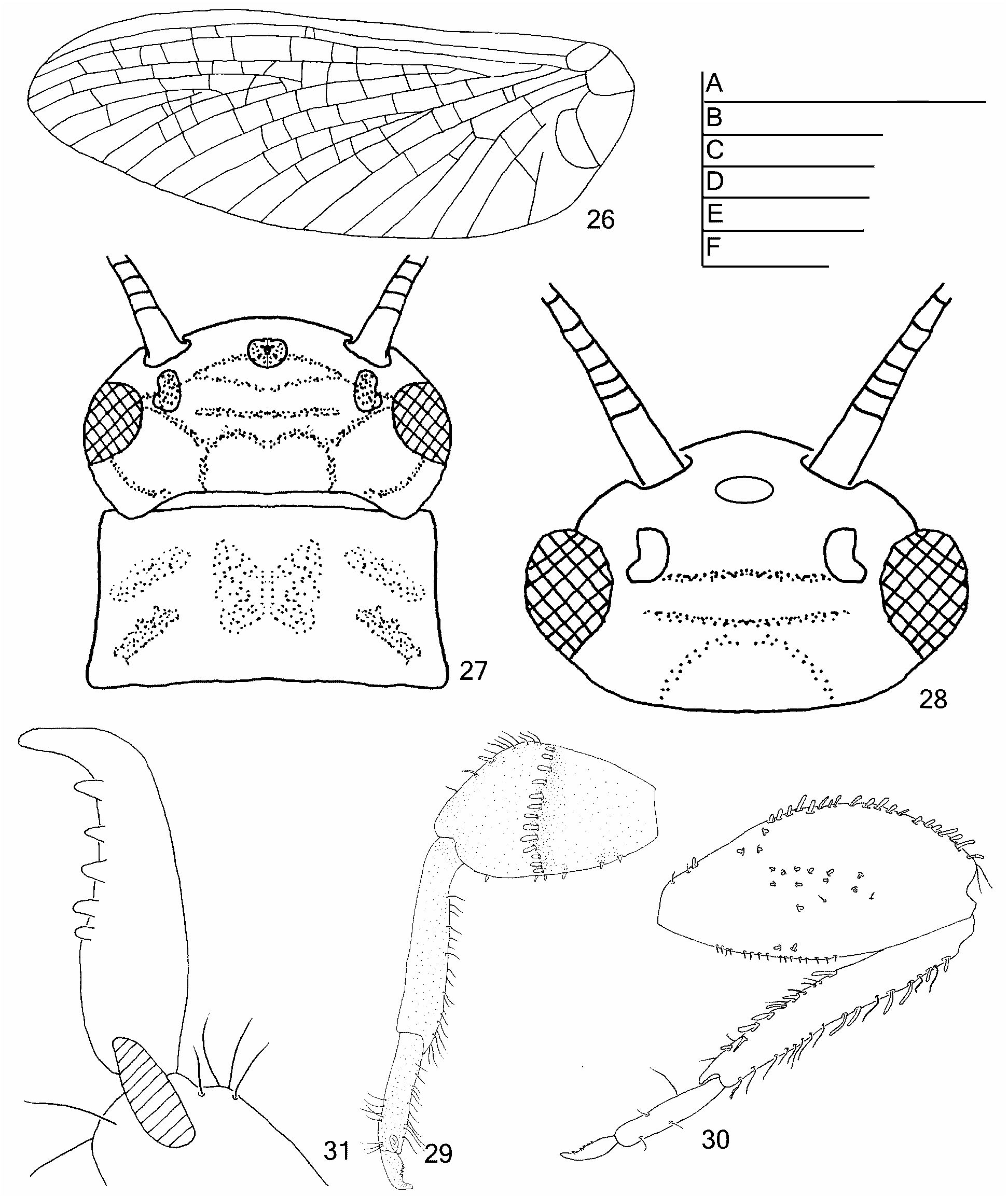