Diagnosis. Sinoe robiniella can be distinguished from the following two new species by the forewing with a median streak in discal cell reduced to a spot, the male hindwing without hair pencils and sex scales, the male genitalia with the uncus rounded apically and subequal in length with the gnathos, vinculum projecting posteriorly as a pair of long, digitiform processes, valva without a costal part, and the female having a rhomboid signum and looped ductus bursae.

Sinoe fuscopalidella : Lectotype here designated: same specimen and data as the neotype of Anacampsis robiniella . This is an objective junior synonym of Anacampsis robiniella . Two paralectotypes in the MCZ are represented by specimens lacking all body parts except for a single forewing, one of which is labeled “ Lectotype, R.W. Hodges.” The latter was never formally designated as a lectotype.

Gelechia robiniaefoliella : Neotype here designated, 3, with two labels “No. 245, Tineid on locust, iss. Jan. 2 / 80 ” and “ Neotype, Gelechia robiniaefoliella, Desig. by Sangmi Lee, 2011.” The specimen is intact, except for missing the apical portion of one front wing. The valvae are separated to show the genitalic structures that verify its conspecificity with Sinoe fuscopalidella . The specimen is in a gelatin capsule below a balsa mounting block with residue of resin at its tip to which the specimen must have been originally attached. No pinhole is present in the neotype. A second gelatin capsule on the same pin of the neotype holds a piece of pin with a portion of a broken thorax. This portion of a thorax is extraneous to the intact neotype, but is retained on the pin of the neotype following curatorial procedures of not removing incorrect labels or other items placed on loaned material. The neotype is deposited in CUIC. What is left of what may have been Chambers’ type specimen is represented by a corroded pin without a specimen that bears a label “ Gelechia robiniaefoliella Chambers Type ” and another label with data similar to the neotype: “No. 245, Tineid leaf spinner on locust, iss. Dec. 8 / 79.” A pupal exuvia with the same label data is on another pin. A second pupal exuvia on a third pin bears the same label data as the Chamber’s original type, except “iss. Jan. 7 / 80.” The neotype and the lost type specimen of Chambers are considered to be part of same series of specimens reared from locust, as described by Comstock (1880). This is a subjective junior synonym based on similarity of genitalia with the neotype of S. robiniella .

Hosts. Fabaceae : Robinia pseudoacacia L. ( Comstock 1880; Godfrey et al. 1987; Schaffner 1959) and Gleditsia sp. Robinson et al. (2002) listed Amorpha fruticosa L. as a host based on the manuscript ledger of reared material received by Meyrick for identification, but this host cannot be verified in the absence of a voucher specimen.

Biology. Comstock (1880) described the larva of G. robiniaefoliella , the junior synonym of S. robiniella , as feeding between two webbed leaflets of R. pseudoacacia in New York and having a body length of 8 mm. Larvae were found in late August, with pupation, according to Comstock, occurring within the webbed leaves from mid- September to mid-October, by which time all the webbed leaflets had fallen to the ground. Schaffner (1959) reported the larval stage as extending from August to spring and the pupal stage from May to July with adults emerging June to July in New Hampshire. Godfrey et al. (1987) reported moths emerging in mid-May from larvae collected the previous fall from black locust in Illinois. We consider it possible that the overwintering stage is a larva in the pre-pupal stage.

Distribution and flight period. Eastern United States from New York west to Indiana south to Mississippi and Arkansas with flight times from late April through September in southern latitudes and from late May through August in northern latitudes

Discussion. Fitch (1859) described A. robiniella , for which he gave the common name "Flattened Locust Leaf Miner," based on one or more adults that he reared from larvae mining leaflets of black locust in New York. Fitch described the adult as "...a minute moth 0.45 [= 11 mm] wide across its spread wings, which are blackish brown on their outer half, tawny yellow on their inner side, and marked with an oblique white band before the middle, a broad grayish white band or large triangular spot on the middle, and half way from this to the tip a white spot on the outer and a pale rose red one opposite it on the inner margin, and also a small white spot on the tip and on the base."

Fitch described the larva as being “ 0.18 long” (= 4.5 mm), flat, deeply constricted between segments, and with prolegs present on A 3−5. This form of larva resembles those of a group of Gracillariidae , including a locust leaf miner Parectopa robiniella (Clemens) , that make a flat mine on top of the leaf. However, Fitch described the mines as being “blister-like” on the undersides of the leaflets and separating the upper and lower parenchymal layers. Such tentiform mines on the underside of the leaflet are typical of those made by cylindrical larvae in the Phyllonorycter (= Lithocolletis ) group of gracillarids, e.g., the locust leaf miner, Macrosaccus robiniella ( Clemens) (Clemens 1863 , Davis and De Prins 2011). The larva with a body length of 4.5 mm is more consistent with the size of gracillariid larvae than with the size of larvae of S. robiniella , described by Comstock as being eight mm in length. Based on the conflicting descriptions of the larva, tentiform mine, and adult moth, it is presumed that Fitch had leaf miners of two genera of Gracillariidae as was as leaf webbers of Sinoe robiniella in the same sample he was rearing.

Thus, the selection of the neotype for A. robiniella , which is also the lectotype of its junior objective synonym, S. fuscopalidella , stabilizes the name of this species as well as the name for the type species of Sinoe . This action also circumvents any association of the name with two species of Gracillariidae that also feed on locust as leaf miners. 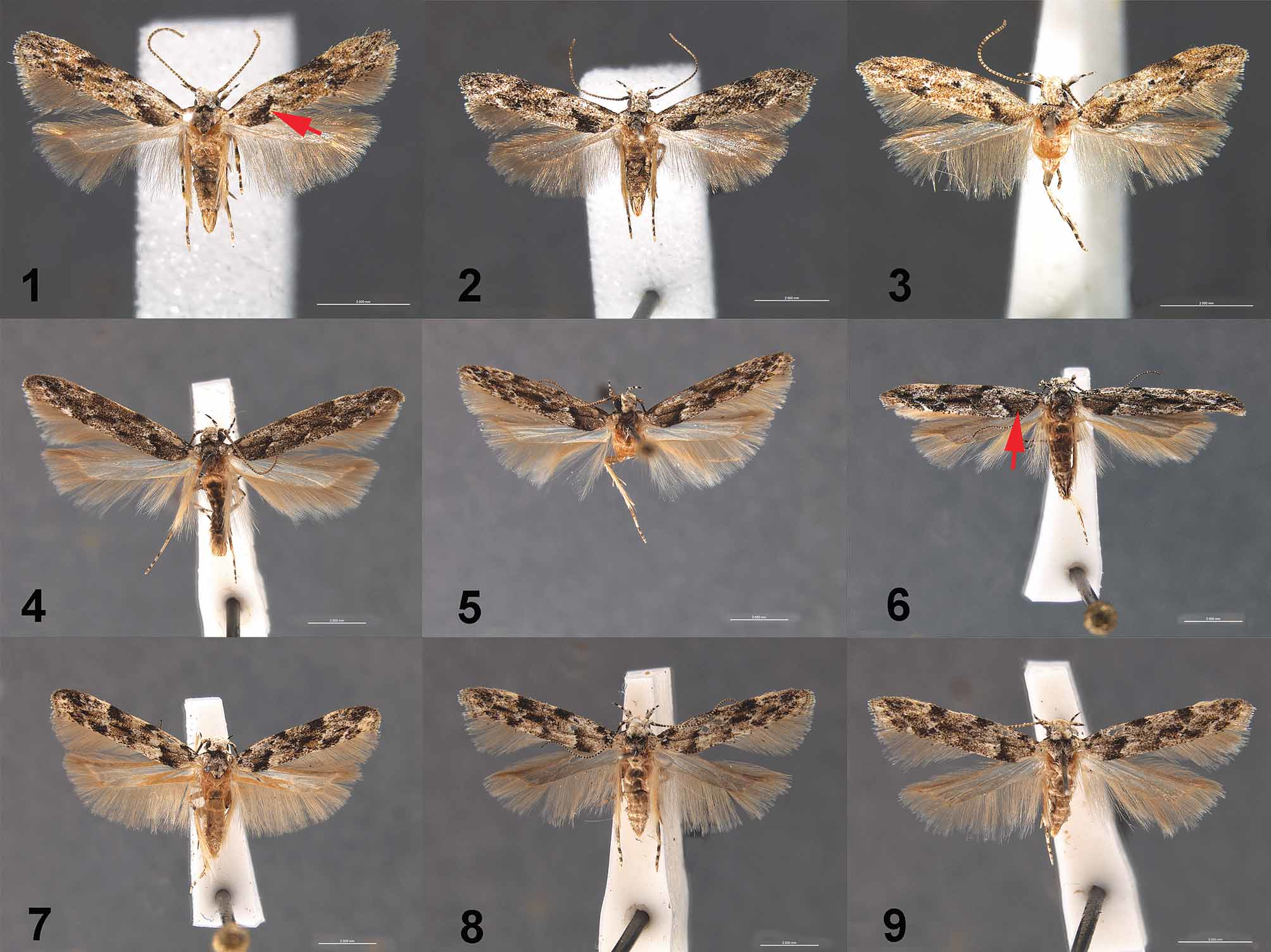 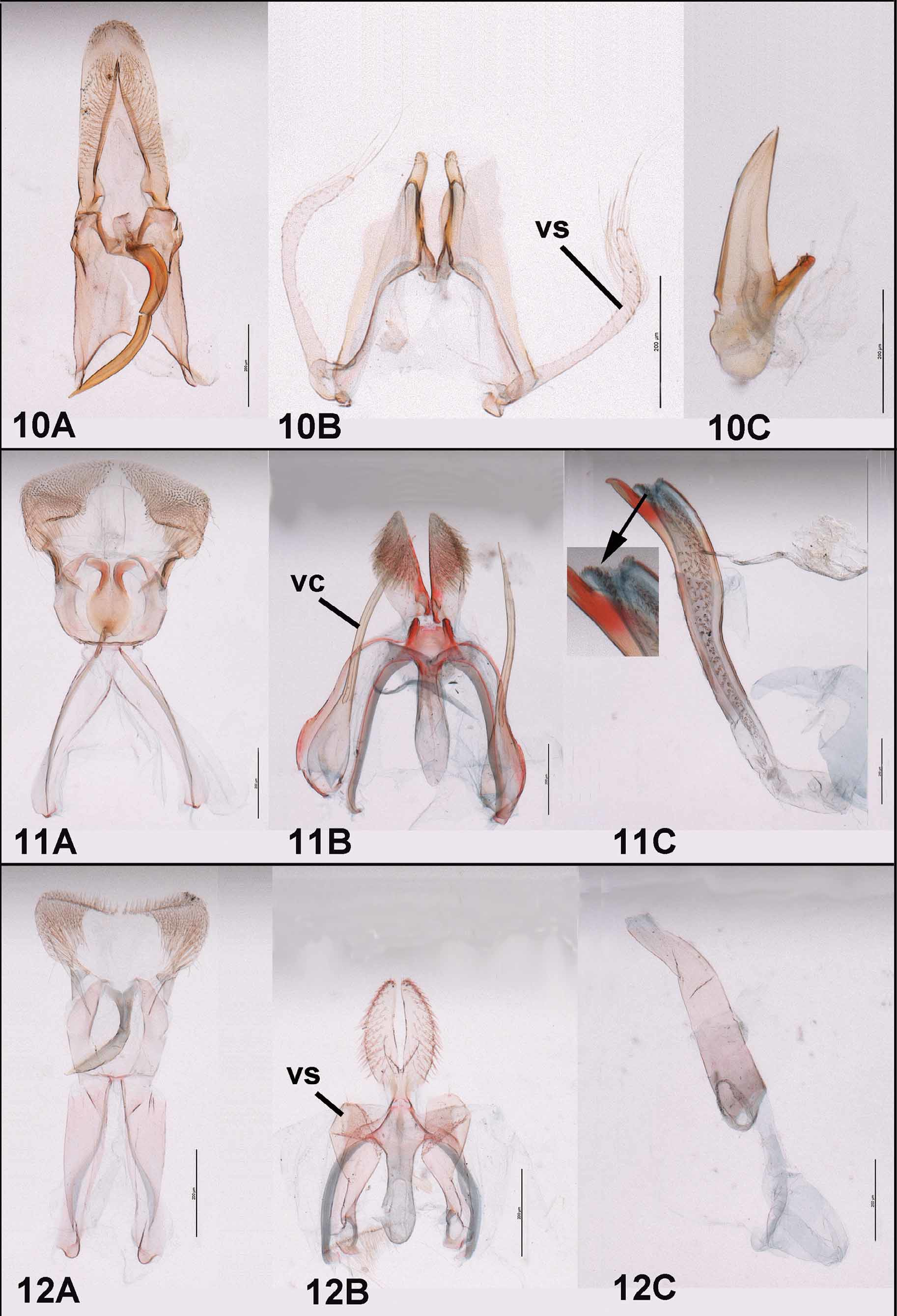 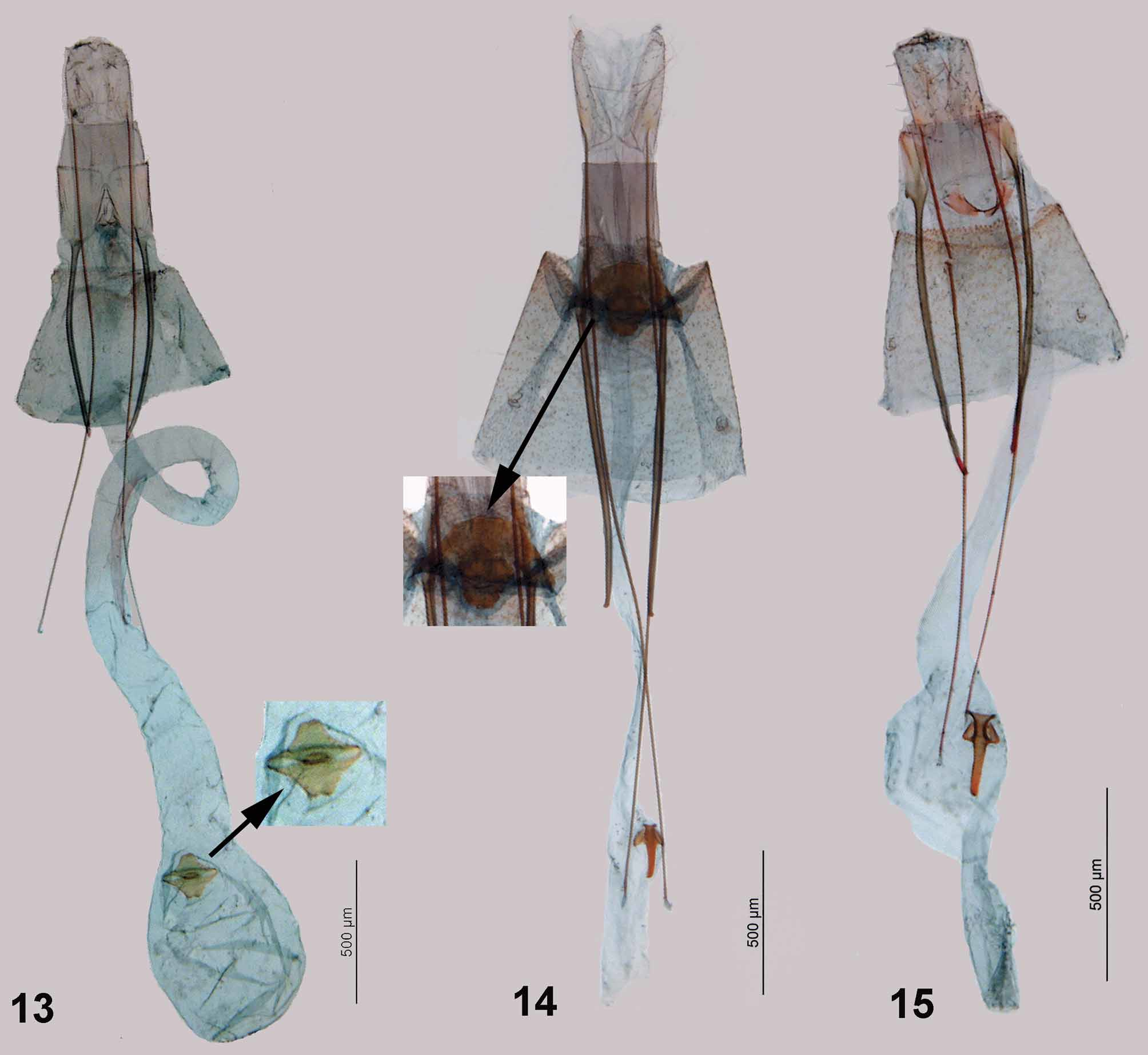