Remarks. There appears to be several groups of species in Chasmocarcinus  as defined at present, although only C. obliquus Rathbun, 1898  , and C. peresii Rodrigues  de Costa, 1968, possess distinct suites of carapace, male pleonal, gonopodal, and/or cheliped characters that warrant their transfer to their own genera ( Deltaplax  n. gen. and Amboplax  n. gen., respectively). Two species, C. typicus Rathbun, 1898  , and C. gemmatus  n. sp. are distinct in having a carapace in which the lateral margins are not distinctly cristate, with the carapace appearing subovate from frontal view; and the third maxilliped ischium is relatively more elongated and slender, leaving a large gap between them even when closed, with the mandibles more clearly exposed ( Figs. 28View FIGURE 28 A, B; 29A). The antennular articles of C. typicus  are also proportionately much longer ( Fig. 21View FIGURE 21 A) than any of the other Chasmocarcinus  species (including C. gemmatus  n. sp., Fig. 21View FIGURE 21 G). These character states are not clear-cut, however, with species like C. chacei Felder & Rabalais, 1986  , and C. longipes Garth, 1940  , possessing intermediate character states in the carapace shape and third maxillipeds. Chasmocarcinus latipes Rathbun, 1898  , is also unusual in that its ambulatory legs are proportionately short, the posterior margin of the epistome has a subtriangular median lobe and the pterygostomial region is not prominently bulging, not being clearly visible from dorsal view ( Fig. 5View FIGURE 5 D). In other Chasmocarcinus  species, the ambulatory legs are proportionately longer, the posterior margin of the epistome has a more rounded or subtruncate median lobe and the pterygostomial region is bulging and clearly visible from dorsal view (e.g., Fig. 5View FIGURE 5 C). We nevertheless do not regard this as useful generic characters. Certainly the taxonomically important G1 and G2 structures do not show any distinct pattern to support separating these species into separate genera for the time being.

The major chelae of adult male Chasmocarcinus typicus  and C. gemmatus  n. sp. are unusual compared to all other congeners in that the fingers are conspicuously elongated and curved, with the submarginal parts of the cutting edge of the dactylus lined with dense short setae ( Figs. 35View FIGURE 35 A, C; 36A). The adult male fingers are also distinctly curved in Chasmocarcinus arcuatus  , forming a large gap when closed ( Fig. 35View FIGURE 35 E), but they are relatively shorter than those of C. typicus  and C. gemmatus  n. sp.

A prominently upcurved P5 dactylus in present in all Chasmocarcinus  species, although this character is also present in Indo-West Pacific genera like Camatopsis  , Chasmocarcinops, Chinommatia  n. gen., Statommatia  n. gen., and Notopelta  n. gen. A subdistal spur on the P5 dactylus appears in some species ( C. chacei  , C. cylindricus  , C. latipes  , and C. mississippensis  ; see Felder & Rabalais 1986) but not all species of Chasmocarcinus  . This spur is, however, absent in all other chasmocarcinid genera. Its size varies among individuals, however, tending to be more developed in males, and seemingly eroded or broken off in some specimens. 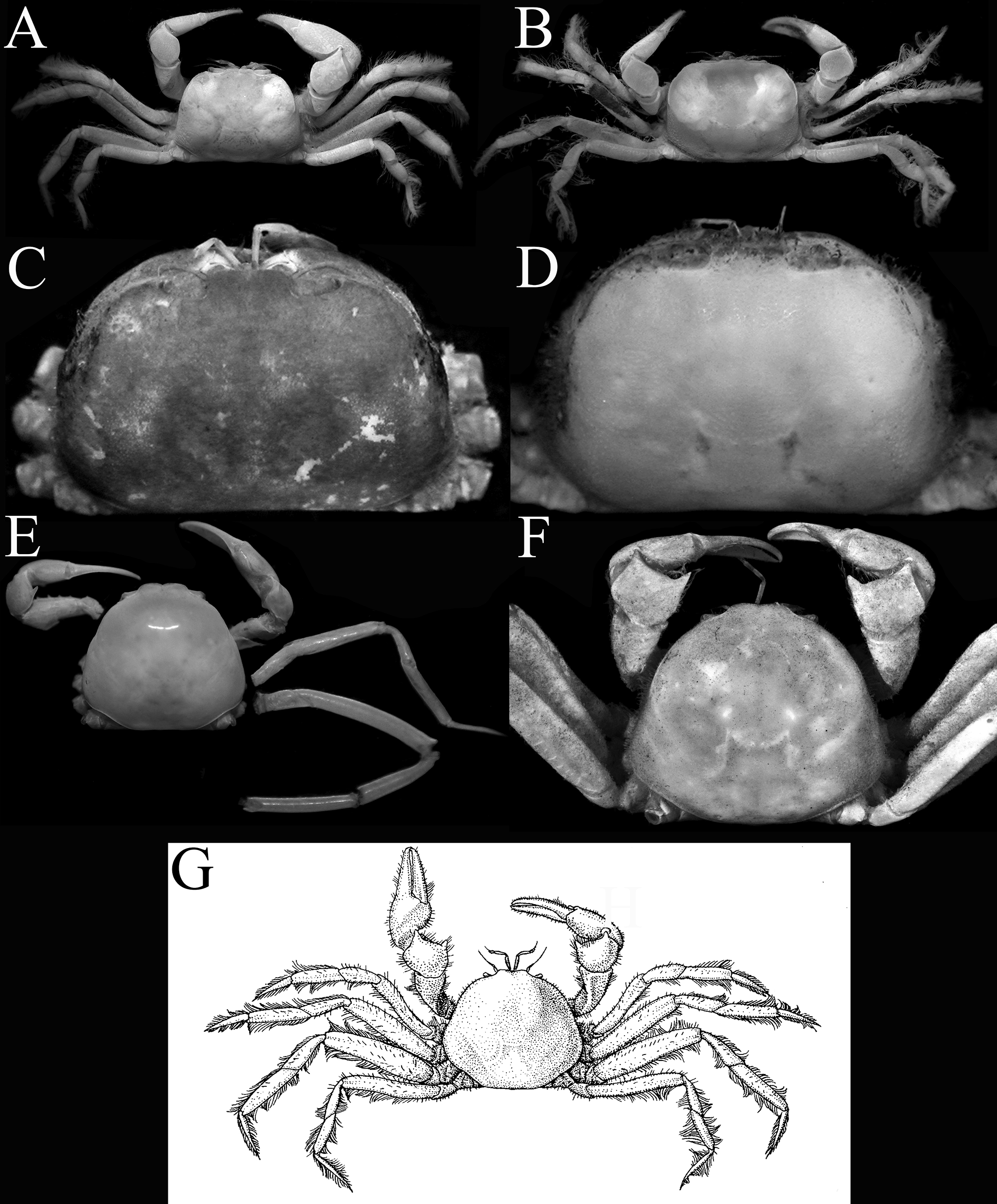