Type repository. The type material (holotype slide CVII-81 and paratype CVII-83) is deposited in the collection of the Department of Biology, Faculty of Sciences , University of Porto , Portugal, and the other slides in the collection of Tardigrades—UFRPE ( Laboratory of Meiofauna , Department of Biology , Universidade Federal Rural de Pernambuco, Brazil).

Etymology. The specific name, dandarae  , is in honor of “Dandara dos Palmares”, an ex-slave warrior, who led the fight against slavery in Brazil in the XVII century.

Ecological note. B. dandarae  sp. nov. was mainly found in shallow sublittoral fine to medium calcareous and quartz sands in low energy and estuarine beaches as Gunga Beach and Forte Orange Beach and occasionally in high energy beaches (Ponta do Sal) and in reef pools as Patacho Beach.

Description of holotype. Female, 194 µm long (204 µm including the caudal apparatus) and 68.9 µm wide between the third and fourth pairs of legs ( Fig. 4View FIGURE 4 A, B). Eyes present (very faint and difficult to see, fig 4 D, probably dissolved by effect of the mounting media). Trapezoid head with eleven cephalic appendages ( Figs 4View FIGURE 4 D, E, 5 A): Internal cirri inserted dorsally on the frontal edge of the head are 23.2 µm long, bearing cirrophores (about 3.1 µm long). External cirri 16.1 µm long ( Fig. 4View FIGURE 4 E), with indistinct cirrophores, inserted ventro-laterally, ventral to the pedestals bearing lateral cirri and primary clavae. The median cirrus, with cirrophore (about 3.4 µm long), is 24.8 µm long ( Fig 4View FIGURE 4 D). The lateral cirrus, 28.2 µm long, is located dorsally in relation to the unconstricted tubular primary clava which is 13.3 µm long. These two appendages share a common pedestal ( Fig 5View FIGURE 5 A). A van der Land’s organ is present at the base of the primary clava. All the cephalic cirri, including external cirri, and lateral cirri have an optically dense dot (black dot when observed under PHC) near their blunt tips. Indentation or notch in the frontal margin of the head between the external cirrus and the pedestal bearing the primary clava and lateral cirrus not observed. In the frontal edge of the head well developed (major diameter about 6.8 µm) secondary clavae are present ( Fig 5View FIGURE 5 A).

A dorsal blunt enlargement is visible in the scapular region at the level of legs I Figs 4View FIGURE 4 A, B, 5 A). No other body lateral projections or cuticular lateral processes are present. The caudal apparatus is constituted by a cuticular conical-shaped projection, 8.9 µm long.

Sensorial spines present on all legs. Sensorial spine on leg I is the shortest, about the same length on legs II and III, and longer on legs IV (9.4; 11.3; 11.2, and 12.7 µm long, respectively). Leg I sense organs are not subdivided into different parts. They are similar in shape to sense organs on legs II and III that are spine-like. However, leg I sense organs are inserted on the posterior part of the leg and revolved frontwards ( Fig. 5View FIGURE 5 B). All the sense organs on legs I –III have an optically dense dot near their blunt tips. The sense organ on leg IV is divided into a cirrophore (1.3 µm long), a proximal portion (4.7 µm long) and a distal portion (6.4 µm long) with a basal van der Land’s organ and an optically dense dot near the tip. Dorsal cirri E are blunt and short (18.7 µm long) with no evident cirrophores and also with a dot near the tip.

Telescopic legs without tibial papillae. Toes with distal stalks considerably enlarged (2.6 µm wide), terminated by small ovoid suction discs (3.7 µm long and 3.4 µm wide on leg IV) with conspicuous braces and well developed peripheral thickenings. In the first three pair of legs, toe 2 is the shortest, toes 3 and 5 are the longest and toes 1, 4 and 6 are medium sized (13.4, 4.7, 16.2, 10.2, 17.9 and 12.7 µm long, respectively for toes 1 to 6 of leg II). In the fourth pair of legs ( Figs 4View FIGURE 4 A, B, 5 C) toes conform to the pattern of the D group of species proposed by Kristensen and Mackness (2000), with toes 3 and 4 of different lengths (10.1 and 12.7 µm long respectively). In legs IV toes 1 and 6 are of intermediate size and similar in length; toes 2 and especially toes 5 are the longest (this character was observed in paratypes; in the holotype only toe 1, 14.4 µm, was measurable).

Dorsal cuticle uniformly and finely punctated, with about 15 pillars/10 µm, comprised of short pillars (ca. 1 µm high) with some delicate transverse lines (about eight) and without smooth regions. Less dense punctation on ventral cuticle which exhibit some transverse folds.

Gonopore rosette-shaped ( Figs 4View FIGURE 4 C, 5C) separated from the anus by a very small groove. The anus, 7.3 µm posterior from the gonopore, is surrounded by a peculiar cuticular round structure, constituted by six platelets.

Remarks. Sexual dimorphism was not evident in the only male (138 µm long) found. This male is similar to females in both qualitative and metric characters (except for their circular gonopore with crescent shaped cuticular fold, distant 6.5 µm from the anus). Juveniles, with six toes on each leg but without a visible gonopore, were also similar to adults. Four-toed larvae were not found. Sense organ on legs I inserted on the posterior part of the leg and turning frontwards, similar to the one described for B. noerrevangi Kristensen, 1978  is consistently present in all the examined specimens. Shape and size of the caudal apparatus are strongly variable among individuals.

Differential diagnosis. Batillipes dandarae  sp. nov. in having medial toes 3 and 4 on leg IV of different lengths and respectively different from toe 1 and toe 2, belongs to the D group of species ( Kristensen and Mackness 2000). Only six known species, including B. brasiliensis  sp. nov. described above, exhibit this toe pattern on leg IV. However, similarly to B. dandarae  sp. nov., only two other species included in this D group, B. africanus  and B. tubernatis  , lack body cuticular lateral processes.

B. tubernatis  was originally described by Pollock (1971) as having a rounded and swollen caudal contour and not a real caudal appendage. In the emended description ( McKirdy 1975), some specimens of B. tubernatis  can exhibit a “strong, single, swollen-based caudal spike inserting as a continuous extension of the body”, similar to the caudal apparatus of the new species. However, in Batillipes dandarae  sp. nov. the caudal appendage is present in all the specimens, including young. Moreover, the new species differs from B. tubernatis  in the aspect of dorsal punctations: they are uniformly distributed and finely punctate in the new species, while apunctate areas and different sized punctations occur in B. tubernatis  . In B. dandarae  sp. nov., and contrary to B. tubernatis  , the secondary clavae are well developed, protruding from the frontal head border. In addition, according to McKirdy (1975), in B. tubernatis  toe suction discs are rounded-quadrate to subcircular in shape with slightly indented frontal edge (see Fig. 12 B in McKirdy 1975), while they are ovoid in the new species ( Fig. 5View FIGURE 5 A, C).

Small dots near the tips of sensorial structures, appearing as black dots (optically dense) under phase contrast microscopy, present in B. dandarae  sp. nov. were not described for both B. tubernatis  and B. africanus  . Optically dense regions below the tip of cephalic cirri were observed by Gallo D’Addabbo et al. (2000), redescribing B. dicrocercus  . Probably, the observation of these dots had been neglected in the description of other Batillipes  species; therefore this character should be carefully used in comparisons of different species.

As previously mentioned, the structure of the revolved sense organ on leg I of B. dandarae  sp. nov. is shared with B. noerrevangi  . The two species cannot be confused because they exhibit a different toe pattern ( B. noerrevangi  belongs to the A group of species proposed by Kristensen and Mackness 2000, which have the middle toes of legs IV of equal length). Both species can be found in low saline waters. The new species occurring mainly in estuarine beaches, as it is the case of Forte Orange Beach that, according da Rocha et al. (2004), has a salinity value of 5–29 PSU, while B. noerrevangi  can be found in low saline waters of the North Sea (4–20 PSU) and the Baltic Sea (3–11 PSU) ( Kristensen 1978, Zawierucha et al. 2015). 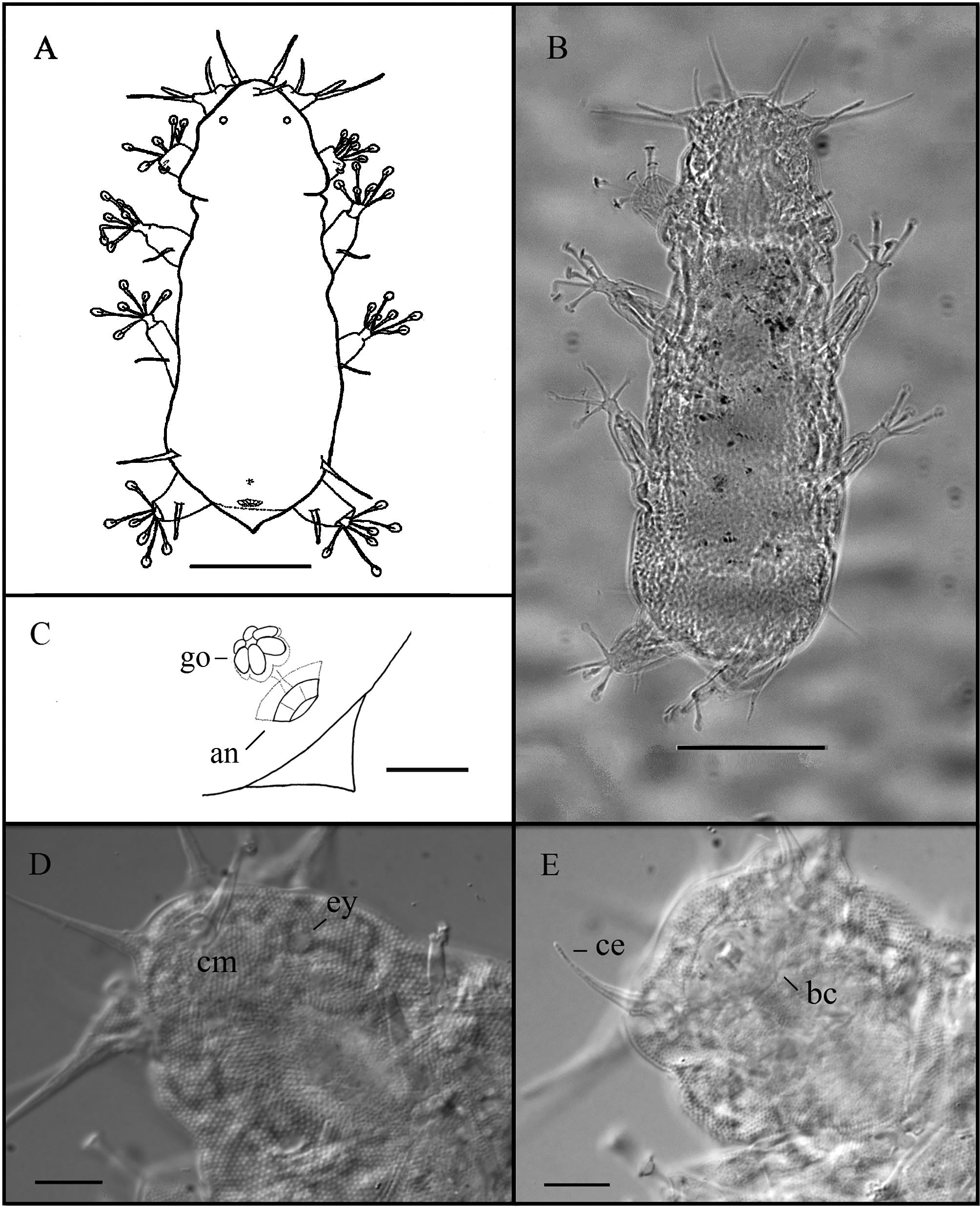 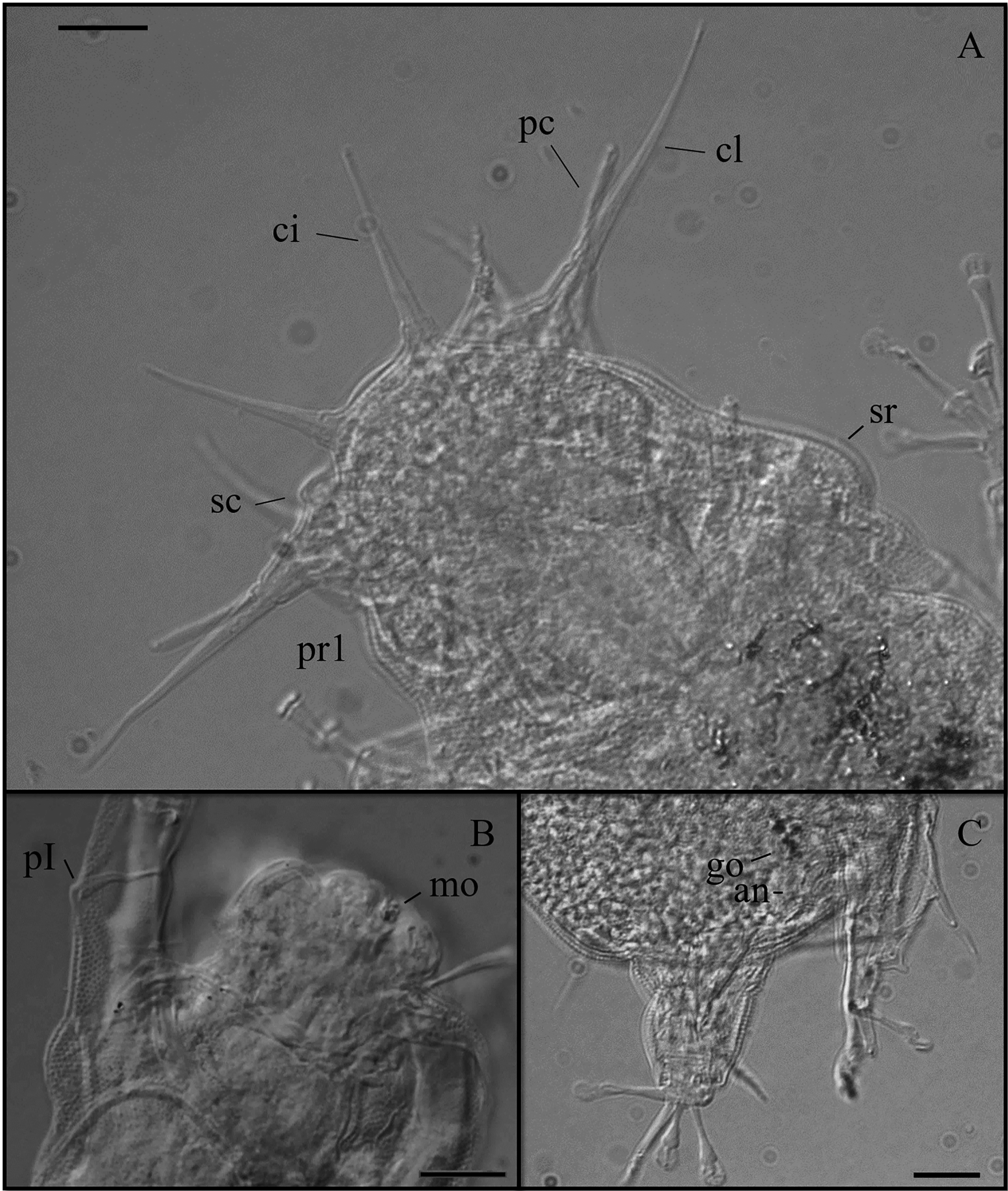 FIGURE 5. Batillipes dandarae sp. nov. A. Anterior portion of the body of the holotype showing cephalic appendages (ciinternal cirrus; cl—lateral cirrus); clavae (pc—primary clava; sc—secondary clava), first body projection (pr 1) and blunt enlargement in the scapular region (sr); B. Leg I of a paratype showing the leg spine (pI) inserted on the posterior part of the leg and turning frontwards, mo—mouth; C. Detail of the female gonopore (go) and anus (an) of the holotype. Scale bars = 10 µm.

FIGURE 5. Batillipes dandarae sp. nov. A. Anterior portion of the body of the holotype showing cephalic appendages (ciinternal cirrus; cl—lateral cirrus); clavae (pc—primary clava; sc—secondary clava), first body projection (pr 1) and blunt enlargement in the scapular region (sr); B. Leg I of a paratype showing the leg spine (pI) inserted on the posterior part of the leg and turning frontwards, mo—mouth; C. Detail of the female gonopore (go) and anus (an) of the holotype. Scale bars = 10 µm.