Raphia frater   Grote, 1864 - # 7675 [ANSP]. Type locality: Middle States [eastern USA]; here restricted to Mount Pocono, Monroe Co., Pennsylvania. Grote (1864) simply stated the type locality as "Middle States," and no additional information is available on the holotype label data. We interpret this as referring to the region south of the New England States, and north of the southern States. Given the complex variation of North American Raphia frater   , it is advisable to restrict the type locality. As Grote’s material likely originated from the eastern United States, we restrict the Type locality to Mount Pocono, Monroe Co., Pennsylvania, from which we examined typical Raphia frater frater   specimens. Raphia frater   and Raphia abrupta   are the oldest available names for this species, and were published simultaneously. As first revisers, we designate frater as the senior name (ICZN, Article 24.2.2). Syn. Saligena personata   Walker, 1865 - [BMNH]. Type locality: United States.

The nominal subspecies of Raphia frater   typically has an even, powdery, dark grey forewing ground colour with all of the markings complete, consisting of the antemedial and postmedial band, and the orbicular, reniform and usually the claviform stigmas. Average forewing length is 16.3 mm (n = 9) in males, 18.6 mm in females (n = 9). The male hindwing is white with little or no dusting of black scales in the subterminal area, and with a pronounced, diffusely-edged black patch in the anal angle, this often with an adjacent black line formed by the terminus of the postmedial band; females usually have some fuscous scales on the hindwing, especially on a slight postmedial band. This subspecies generally lacks the form with contrastingly darker medio-anal and costal black patches that is prevalent in Raphia frater coloradensis   , but it does occur rarely even in Atlantic Canada ( Fig. 1g View Figure 1 ). The yellowish-ochre forewing scales typical of Raphia frater coloradensis   are absent. Raphia frater abrupta   differs in having a more angulate and linear antemedial band, a paler grey and less powdery-appearing forewing, duskier hindwing, and smaller size. As discussed in the section on Raphia frater   , geographically intermediate populations are extremely variable with respect to these traits, and are considered to be transitional between subspecies frater and coloradensis / abrupta, the only two subspecies abutting the range of Raphia frater frater   .

Raphia frater frater   is primarily a boreal taxon, especially common in aspen ( Populus tremuloides   and Populus grandidentata   ) dominated forests and the Aspen Parkland ecoregion of the Prairie Provinces. In the East, it extends south of the Great Lakes region into Pennsylvania, Ohio and Indiana, but apparently not southward into the southern Appalachians, which are essentially devoid of Raphia   records. The transition zone between Raphia frater frater   and Raphia frater abrupta   extends from Maryland westward roughly along the Ohio River Valley to east-central Missouri, then northwestward through the northern Great Plains. The southeastern range edge of Raphia frater frater   is virtually identical to that of both trembling and bigtooth aspens ( Fig. 2 View Figure 2 ). In the West, Raphia frater frater   occurs south along mid-elevation mountain ranges of the Pacific Northwest into Washington, and southward along the Rocky Mountains. Specimens from high elevations in Colorado (Gilpin Co., 9500') and New Mexico (Sangre de Cristo Mtns., 7900') are of the typical frater phenotype, the coloradensis phenotypes occurring at lower elevations. 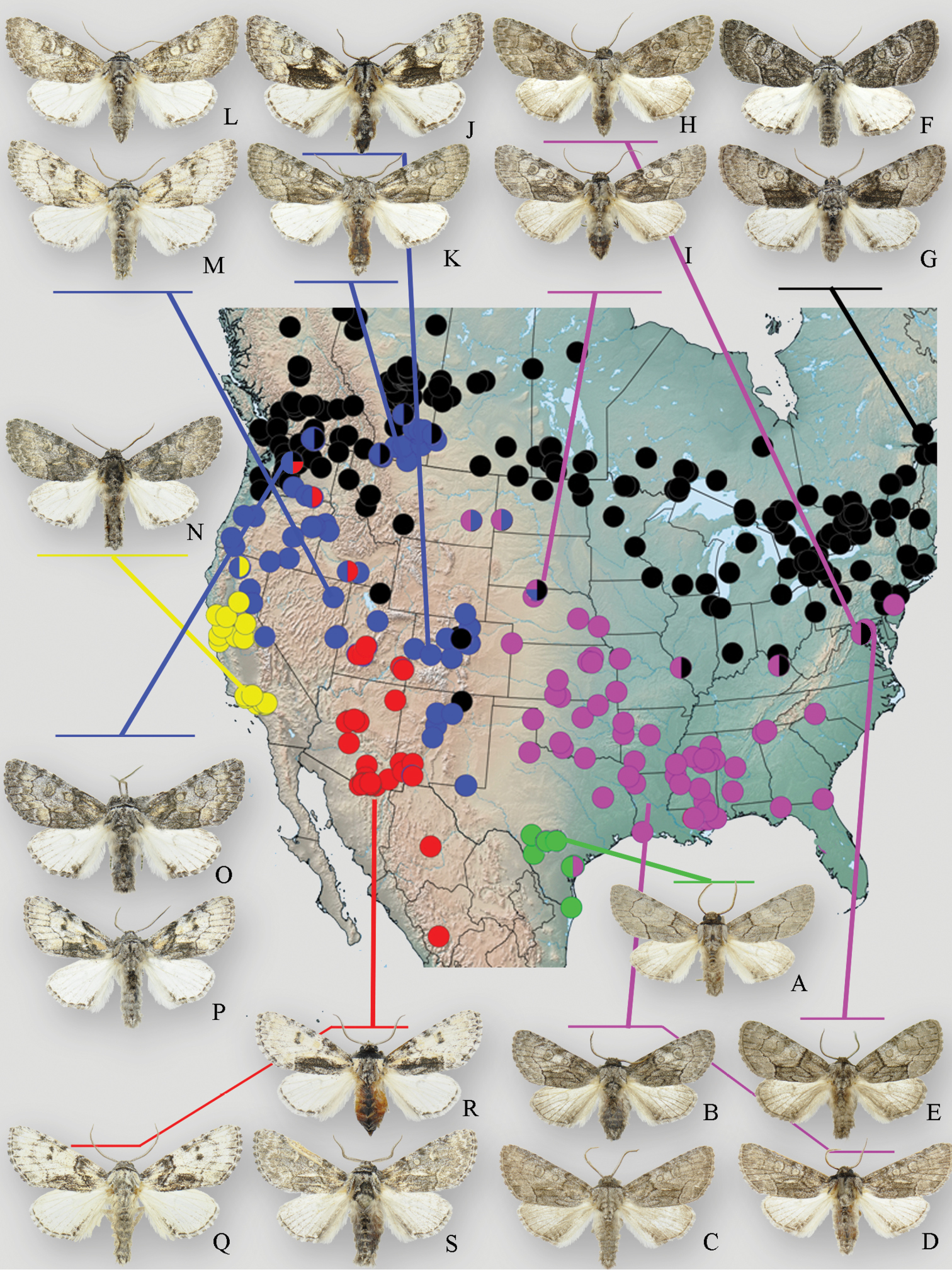 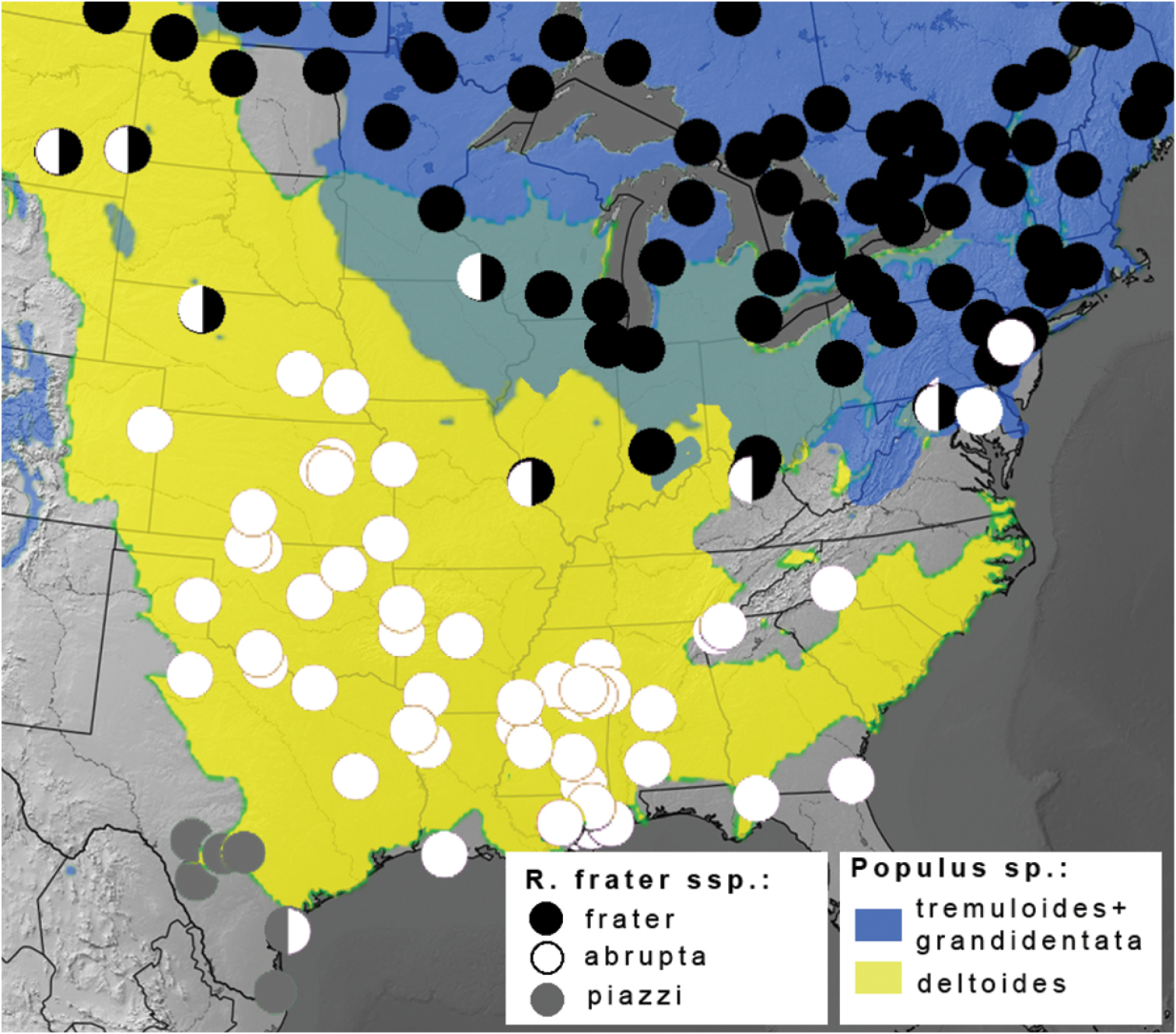 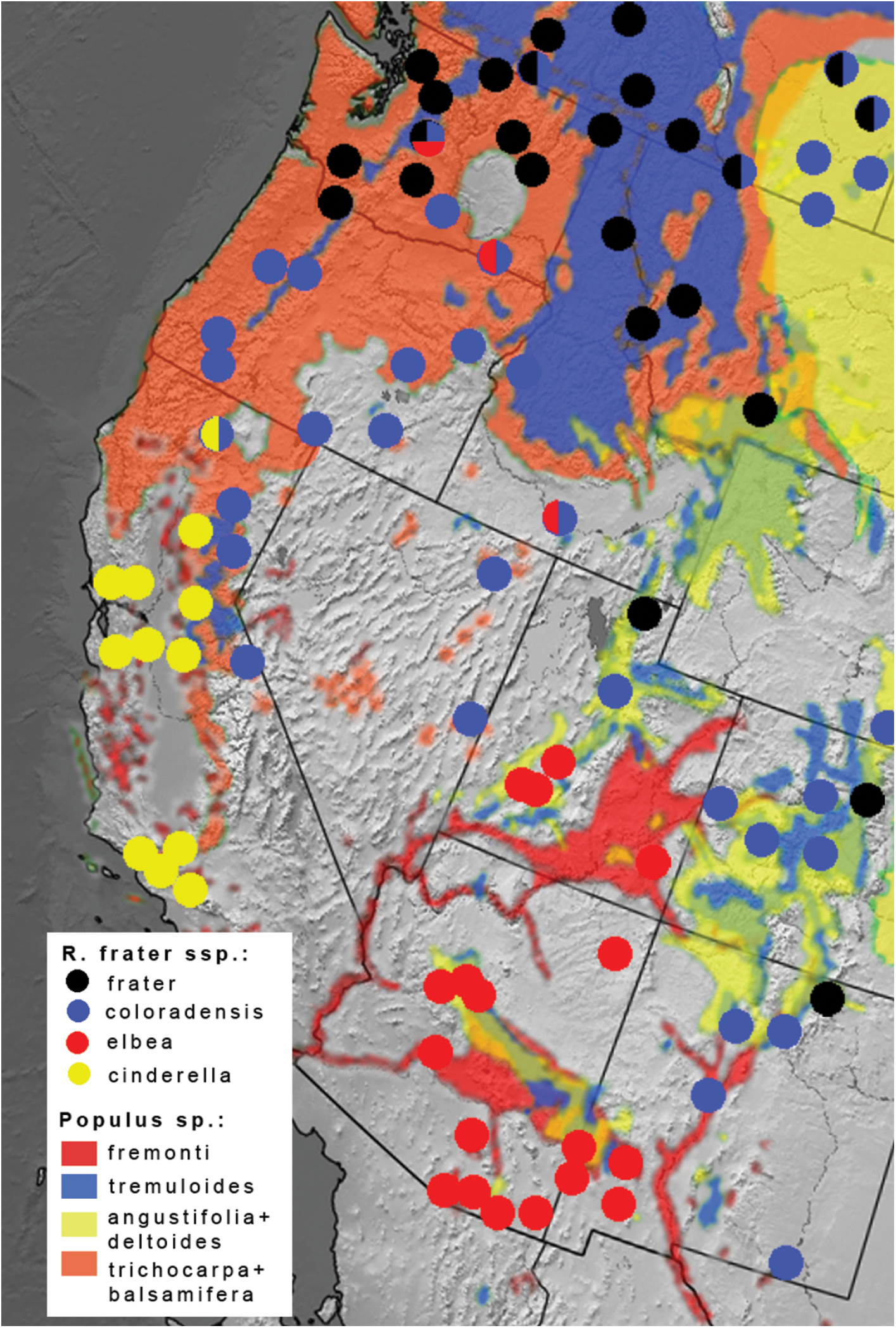